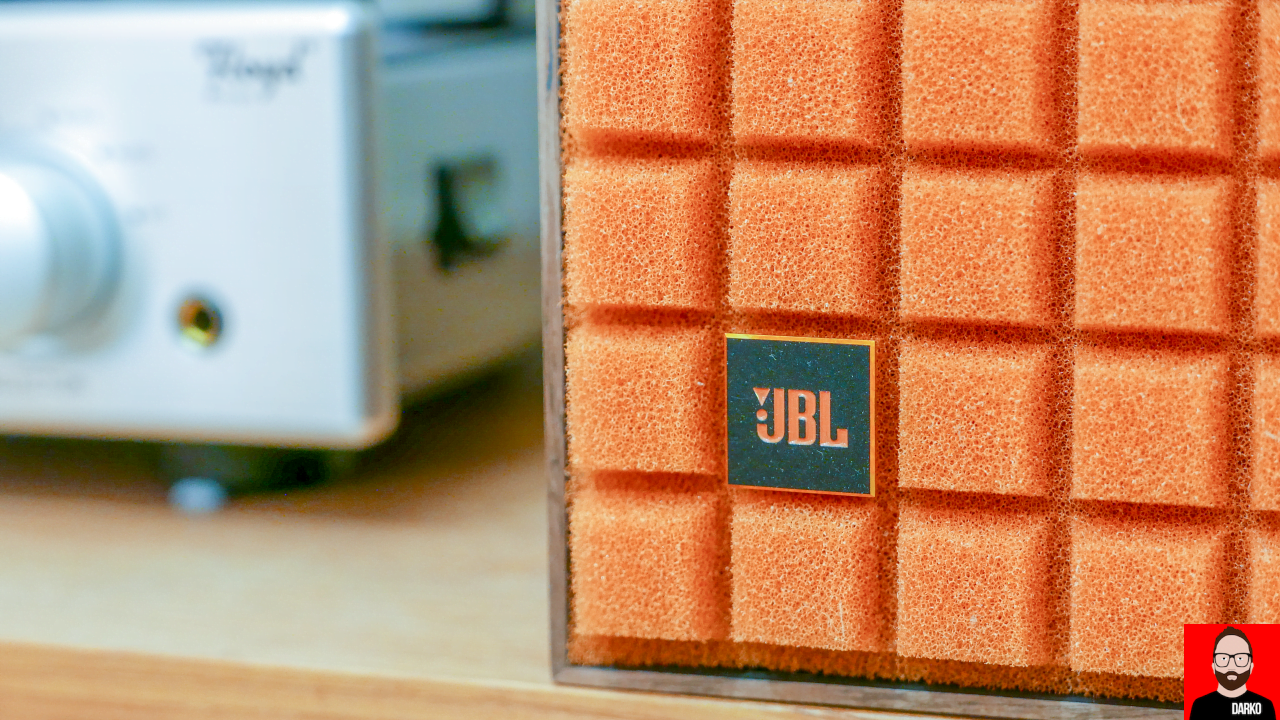 Approximately three years ago, I had the opportunity to review JBL’s reintroduction of its L100 speaker. That new L100 Classic featured the outward appearance of the original, with its iconic Quadrex foam grill available in orange, bright blue or black. Upon removing the grille, the familiar white bass driver became the focus of attention, accompanied by front-mounted controls to adjust treble and midrange. The L100 Classic received a significant amount of attention due to its large, warm, and slightly loose sound, which was easy on the ear. While I appreciated the broad appeal of the speaker, I did not fully embrace it. However, I did appreciate the retro aesthetic of the L100 Classic, which evoked strong memories of the 1970s.

As a result of this experience, I was somewhat hesitant about the L52 Classic, which is priced at £999 / US$1,000 / €1,199 and features the same retro design and color options but on a smaller scale. I wondered if the smaller size would also result in a smaller sound, as the L52’s mid/bass driver is the same size as the L100 Classic’s midrange driver. 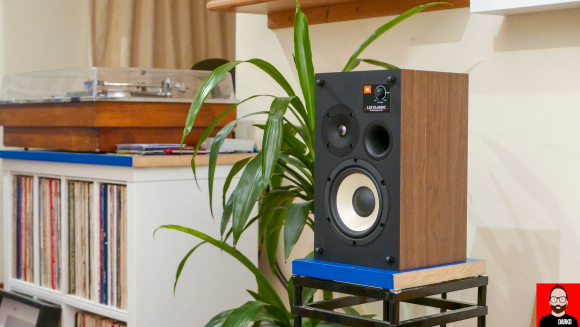 The lowdown
The JBL L52 Classic is a two-way loudspeaker featuring a 5.25-inch mid-bass driver made of pure-pulp cone, which crosses over at 2.8kHz to a 0.75-inch titanium dome tweeter with a waveguide. The speaker has a stated frequency response of 47Hz-24kHz (-6 dB), which indicates a relatively strong bass performance for a small speaker. However, its sensitivity is below average at 85dB and its nominal impedance is 4 ohms, which may make it somewhat difficult to drive. The L52 Classic is front-ported, allowing for flexible placement, and the tweeter is offset, so it can be positioned on the inside or outside of the speaker as desired. The treble level can also be adjusted using a rotary dial on the front of the speaker.

The L52 Classic’s grilles are attached via plastic lugs, which may not be the most user-friendly or durable design. The speaker’s overall build quality is satisfactory, but there are options at similar price points with superior construction. The L52 Classic is smaller than expected, measuring 7.7 inches in width, 13.0 inches in height, and 8.5 inches in depth, making it a good fit for bookshelves or wall mounting. As a fairly typical ported two-way standmount priced just under the £1,000 threshold, the L52 Classic faces strong competition in its market segment. 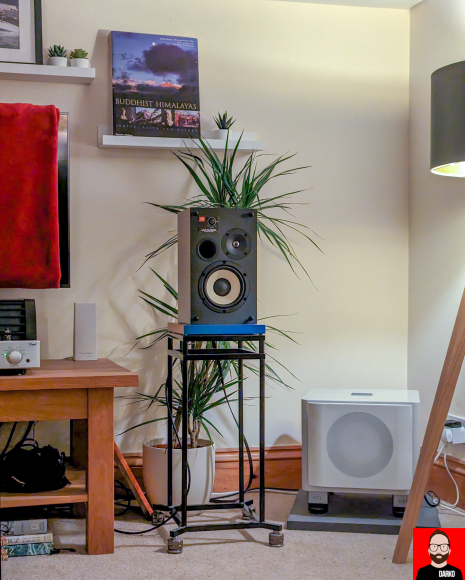 Listening system
During the listening sessions, a Gold Note PA-10 stereo power amplifier (priced at £1,400) was utilized as the primary amplification source. The audio source components consisted of a Pro-ject Stream Box S2 Ultra (£630) and a Mytek Liberty II DAC (£1,295), with the latter’s volume control utilized for adjustment. The JBL L52 Classic speakers were compared to Monitor Audio Silver 100 7G speakers (£799), which had received favorable reviews, as well as Graham LS6 standmounts (£2,400) as reference points. Additionally, the L52 Classics were tested with a resident REL T/7x subwoofer (£999). 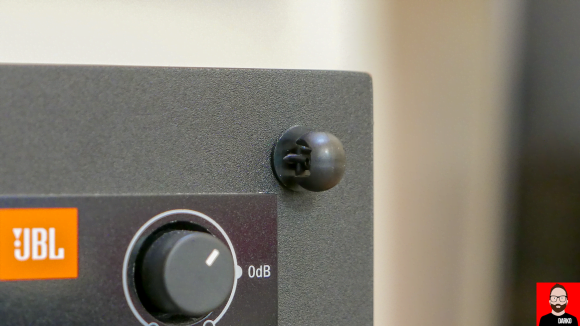 Sound quality
Initially, the L52 Classic speakers were evaluated on their own and it Immediately became apparent that they were a highly capable and enjoyable option. The speakers produced crisp, clean, and lively sound, with a highly detailed and surprisingly expansive soundstage. While they did reveal their small size when playing music with significant heft, such as “Bliss on Mushrooms,” “Enter Sandman,” and “Saint Saens 3,” they still managed to create an impressive illusion of scale. Film music, such as Interstellar and Inception, was particularly atmospheric when played through the L52 Classics. The treble was refined, at times approaching the elegance of the Graham LS6 speakers, which was a surprising and pleasing discovery.

However, it is important to pay attention to the placement and amplifier choices when using the L52 Classics to achieve optimal performance. In my experience, positioning the speakers approximately 45cm away from the rear wall provided the best results, while higher damping on the PA-10 amplifier proved to be too intense, dulling the music rather than enhancing it. Brighter amplifiers may also be best avoided with the L52 Classics. Overall, the speakers were suitable for bookshelf or coffee table use, but were optimized for more traditional placement on stands.

While the bass of the L52 Classic was not particularly deep, it was tight and punchy. Acoustic bass, such as Kham Meslien’s “Ta Confiance” (Fantome…Futurs), retained a satisfying level of texture. The L52 Classic performed well with upbeat tracks like “Act Like You Know” (Fat Larry’s Band), but struggled with more complex bass lines like those found in Massive Attack’s “Angel” or Porcupine Tree’s “Occam’s Razor.”

And yet, the dynamics of the L52 Classic were surprisingly strong. On the downside, poorly recorded material did not sound particularly good on the JBLs, and bright recordings tended to sound harsh. Despite this, the overall sound of the L52 Classic was described as delicate, expansive, and luscious. It is capable of producing a silky, luxurious sound, as demonstrated by India Arie’s “Worthy,” but with somewhat less richness than full-fat milk. 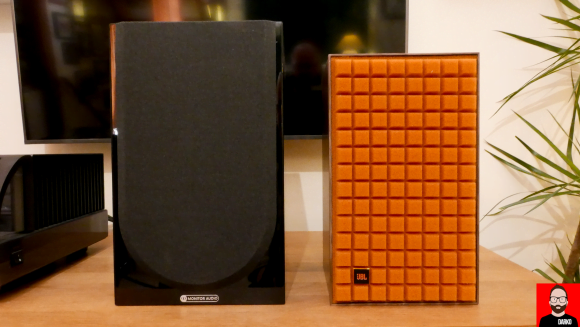 vs. Monitor Audio Silver 100 7G
Darko reckoned there was ‘no subwoofer required’ with the Silver 100 7G. Plumbing them into the review system I heard why; bass depth was chalk and cheese different to the JBLs. The Monitor Audios fill in the lower octaves beautifully. And the JBL struggle to keep up.

The Silver 100 7G speakers performed reliably, with a soundstage that was expansive and detailed. Tonality was slightly on the warm side, enhanced by a marginally prominent upper bass that wasn’t unattractive but departed from neutral. Whether this was a room interaction or design feature I don’t know; it only made itself heard on certain types of music anyway. Maybe I was trying too hard to find a chink in the Silver 100 7G’s armor; however, moving them closer muddied their sound across the frequency range, making them less believable than the JBLs did. Overall though, these speakers got remarkably close to my Graham LS6 speakers at a third of their price tag.

Returning to the L52 Classic was really interesting. I was expecting disappointment from a thinner sound. Far from it. After quickly adjusting to their sonic signature I was soon really enjoying the music again. The JBL’s approach is different, detail and clarity to the fore, theirs a more brightly lit performance. No they don’t dig as deep as the Monitor Audio, but that’s observation (not comment). Just like the iconic BBC LS3/5A design (which has even less bass) the L52 Classic is a real communicator. 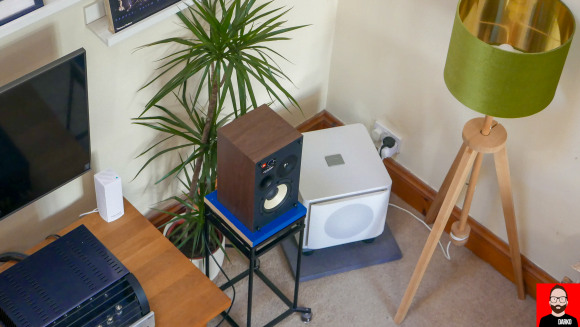 With a subwoofer
Time to ink in those lower notes. Into the system went the REL T/7x subwoofer. After adjusting crossover and gain to match the L52 Classics I settled into listening (the main speakers run full range, augmented by the subwoofer).

The subwoofer blended well with the JBLs and gave a full-range sound comparable to the Graham LS6 + REL T/7x. The Grahams were more refined, airier and had greater composure, as they should be for a pair of speakers over twice their price. The L52 Classics were by no means embarrassed though. The intricacy of Kham Messlien’s bass playing on “Ta Confiance” (surely a future audio-show staple) was very evident. Jaap van Zweden’s superb performance (and recording) of Britten’s “War Requiem” had the grandeur it deserves. Inception from Hans Zimmer grew in stature, causing the volume to be nudged higher. Even if the JBLs did lose a little poise in the process.

On price, the £699 REL T/5x (review here) is probably a better partner for the L52 Classic. It sounds very similar to the T/7x but doesn’t go quite as low. And other subwoofers are available. The combination of Silver 100 7G plus subwoofer worked really well though. 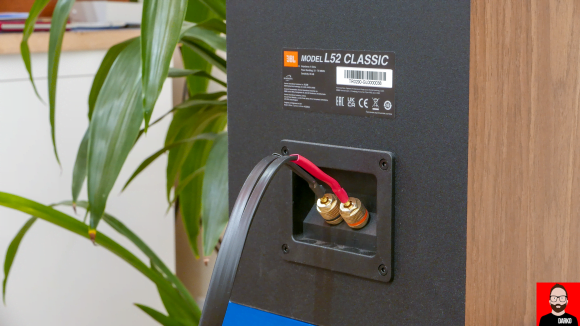 Conclusions
The L52 Classic is a small standmount that sounds anything but small. With attention paid to setup, it produces a big sound: one that majors on detail and transparency but differentiates itself from the clarity-at-all-costs brigade by way of refinement and delicacy. It has dynamics beyond its pay grade and it responds well to a subwoofer should you ever want to have your cake and eat it. The retro looks are fabulous too.

And now the kicker. As of December 2022, significant discounts (30-50%) are being offered by several dealers in the UK, USA and Europe (possibly elsewhere too). I contacted JBL for comment but they didn’t say why such heavy discounts were being applied by retailers to the L52 Classic. Their silence is our gain. 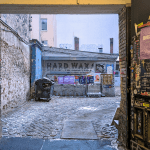 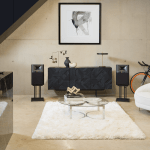