What is 2022’s best-looking hi-fi product? If I was going to reach the maximum number of people with this question, I would have to ask it of the Darko.Audio YouTube community. The question couldn’t be open-ended to generate tens (maybe hundreds) of possibilities from years gone by. It would need to focus on products introduced in 2022 whose popularity could be determined in a more focused manner by way of a reader poll.

That in turn presented a fresh problem: YouTube ‘image’ polls permit only 4 options. I’d already fingered Audio-Technica’s 60th-anniversary turntable as one possible candidate but over on YouTube – as out in the real world – vinyl playback is still a niche pursuit. Ditto CD playback (that’s still more popular than vinyl) and its cousin ‘streaming DACs’. Instead, I chose to split my shortlist of four candidates between the meat and potatoes of hifi products – loudspeakers and integrated amplifiers – and in the interests of balance, I’d grab two from each category.

Asking this publication’s Patreon subscriber base for suggestions of amplifiers and loudspeakers introduced in 2022 that most tickled their visual fancy, one loudspeaker received more shout-outs than any other: the Mission 770 (reviewed here). Its outward appearance is a near-as-dammit clone of the original even if the drivers and crossover are not. Coming a close second was the KEF LS60 Wireless (review here) whose very progressive – and some might says divisive – industrial design centres around an unusually narrow front baffle.

In case you’re wondering: despite my penchant for Future-Fi, I find the Mission far more visually pleasing than the KEF and I thought such a design dichotomy might play well in a poll; if only to underscore how modern loudspeaker manufacturers are as adept with sleek designs intended for modern/minimalist spaces as they are at throwing it back to the seventies to tap into the mid-century modern revival. Remember: 1) loudspeakers are hi-fi furniture and 2) one man’s meat is another man’s poison.

Two down, two to go.

Perhaps the two integrated amplifiers on my YouTube poll shortlist could reflect the bi-polarity of the loudspeaker candidates: one modern looking and one a throwback. The latter would be an easy mark: NAD’s 50th Anniversary C3050LE (review here) which takes its design cues from the then-British company’s mid-70’s 3030.

To find a more future-facing amplifier design I would didn’t have to dive too far into this website’s visitor stats to see that one of the most viewed articles of 2022 concerned the introduction of Hifi Rose’s RA180 (news here). Back in May, I said it looked totally bonkers. And I think it looks totally bonkers now. Its multitude of switches, sliders and knobs are an Arithnommaniac’s fever dream and I still want to get my hands on one. I suspect 2023 will see that happen but for now at least I had completed my shortlist of four hifi products, ready to ask YouTube “What is 2022’s BEST-LOOKING hi-fi product?”; I had two speakers, two amplifiers, two progressive designs and two more traditional ones.

Me? I expected (my favs) the Mission 770 to romp home to victory with the NAD amplifier coming in a close second. But no. Just over nine thousand people voted with the KEF clocking up almost twice as many votes as the Mission. The NAD amplifier’s popularity pushed the Mission into third place 🤔: 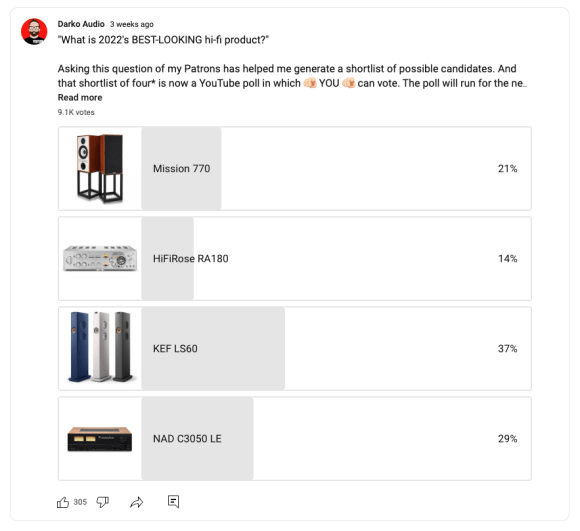 Based on this shortlist of four, as voted on by this publication’s YouTube community, the best-looking piece of hi-fi gear introduced in 2022 was the KEF LS60 Wireless. 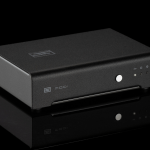 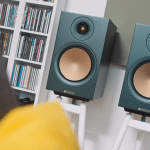