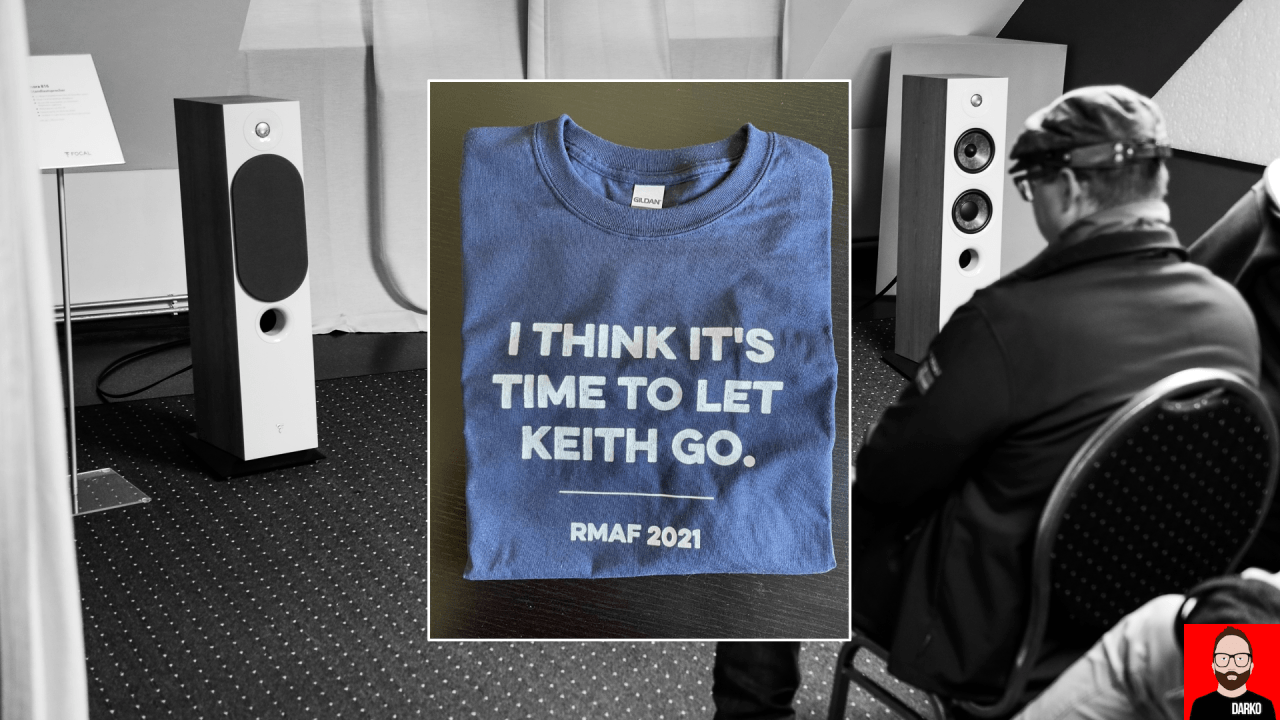 “I think it’s time to let Keith go” reads the self-printed t-shirt by Darko.Audio Instagram follower Fritz H.. He had planned to wear it at RMAF 2021 – a hi-fi show that didn’t materialise because of the pandemic. “I have nothing against Nils”, says Fritz, “but the audio community has unfortunately destroyed his song (along w/ other examples you cite)”.

Fritz’s t-shirt pokes fun at the endless thrashing of the Nils Lofgren song “Keith Don’t Go” (from Acoustic Live) at hi-fi show demos. In a recent Instagram reel, I gave nine other examples of songs that have met a similar fate. I’ll name three of those here: Boz Scaggs’ “Thanks To You” (from Dig), Pink Floyd’s “Money” (from Dark Side Of The Moon) and The Eagles’ unplugged version “Hotel California” (from Hell Freezes Over).

Over-exposure I know too well from time spent running indie discos in the noughties: over a relatively short period (months, not years), a disproportionately heavy lean on Blur’s “Song 2” and Pulp “Disco 2000” as party starters sanded away those songs’ interesting edges. The same edges that made “Song 2” and “Disco 2000” respectively a thrill-ride and quirky at first listen (and on tenth listen).

And when we beat a song (or phrase) to death, we turn it into a cliché. Just as Blur’s “Song 2” has become one of the many indie disco clichés, “Keith Don’t Go” has become one of the many hi-fi show clichés. To borrow from Google’s definition, a cliché is “a phrase or opinion that is overused and betrays a lack of original thought.” And without original thought, we learn nothing. We discover nothing new. Our senses are blunted and our curiosity dulled.

Walking past the notions that: 1) “Keith Don’t Go”, “Money” and “Hotel California” are songs of a certain age more likely to appeal to the gentlemen-of-a-certain age attending hi-fi shows; and that 2) hi-fi show exhibitors often wear so many other hats – R&D team lead, product engineer, tech support and shipping department – that new music discovery sits permanently on the ‘do to’ list; and that 3) manufacturers paying to exhibit at a show get to play whatever they damn well please; we arrive at the number one reason why these songs receive a substantial amount of hi-fi demo airtime: they are terrific-sounding songs whose dynamic range has been preserved – and in some cases maximised – by the mastering engineer.

I’ll not argue against that. The quiet parts of “Keith Don’t Go”, recorded on Lofgren’s 1997 acoustic tour, play quietly and the loud parts play loud. The quieter parts of the recording haven’t been pushed closer in volume to the levels demanded by the louder parts, as is the case with, say, Spoon’s Lucifer On The Sofa or Band Of Horses’ Things Are Great — two albums from 2022 whose subjective musical enjoyment far outstrip their objective sound quality. They are what we call ‘dynamically compressed’. And Acoustic Live is not. It sounds wonderful.

These audible findings are mirrored by the scores returned by MAAT’s DROffLine MKII – a piece of software that analyses the dynamic range of each song on an album to produce an average dynamic range (DR) score. Regular visitors to the Dynamic Range Database (currently under redevelopment) will be familiar with this kind of analysis.

From MAAT’s website: “The DR algorithm, related to PLR (Peak–to–Loudness Ratio) or “crest factor,” specifically measures the dynamic density or lack of dynamics caused by overly aggressive dynamic compression and limiting. Although the companion DRMeter MkII provides a manual measurement of the “official” integrated DR or DRi, only DROffline and DROffline MkII can generate official values automatically and in the background.”

Side note: MAAT’s algorithm differs slightly from the algorithm used by Roon to generate its in-app DR scores. And whilst those differences fall beyond the scope of this article, the overarching message remains the same. 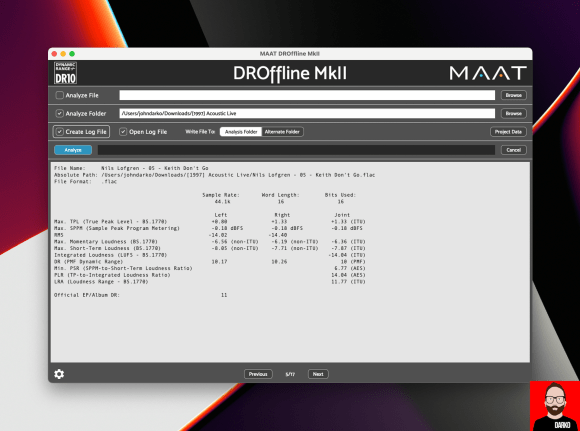 This means very little until we compare those scores to the average dynamic range scores turned over by the aforementioned Spoon and Band of Horses albums. They come in at DR6 and DR5 respectively. I’d listen to those records for personal enjoyment but I’d not hang any hi-fi gear assessment on their sound.

What about the music that I do use to assess hi-fi gear? In my recent Buchardt vs. KEF video, I cited three albums:

According to the MAAT app, Headless Horseman’s 007 is DR7. That’s unusual in a techno world where dynamic range is often the first casualty of a producer demanding that his/her mastering house make the track pop 😳 on a club PA — and where we often see scores of DR5 and below. Competing for radio listeners’ attention by dynamically compressing recordings is how the music industry kickstarted The Loudness Wars. And it’s probably why this year’s releases from Spoon and Band Of Horses are dynamically stunted.

Think hi-fi show ‘club music’ sounds any better than The Headless Horseman? Think again: Daft Punk’s Random Access Memories (88883716862, Columbia) is another album beaten to death by hi-fi demos (*cough*) around the world. It clocks in at DR8, only a single point higher than our Headless Horseman.

Let’s wrap this up by making two points and asking a question.

We should guard against becoming too hung up on the dynamic range scores spat out by the MAAT app. Only our ears can tell us if a recording sounds thin or if its treble is slightly sharper than it should be or if the bass is a little lean – qualities often ascribed to the (ironically) more dynamic sounding CD masters of the early- to mid-1980s.

I remain fully cognisant that some of my music choices aren’t to everyone’s tastes — just as Diana Krall and The Red Hot Chilli Peppers aren’t mine. The Darko.Audio website, YouTube channel and podcast are aimed at people with music tastes similar to my own. If that’s not you, you are still welcome. This investigation into dynamic range scoring tells me what my ear has told me for a long time: that when judged strictly from a dynamics point of view, the sound quality of my review music is no worse than the old warhorses trotted out at hi-fi demos.

Why should hi-fi demo music remain so limited in its scope when we don’t have to look all that hard to find other great-sounding records? Records that would still optimise the performance of the hi-fi system through which they are played but speak to a broader range of musical tastes than those held by you. Or me. Hello, discovery. Welcome back, curiosity. Farewell, Keith.

In my next post on this topic, I will detail another five less well-known but dynamically strong recordings. Until then, take a listen to A Place To Bury Strangers’ See Through You (2022) where the band’s artistic intent pushes everything in the mix to the max for a DR score of 1. 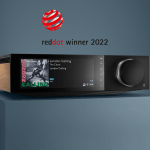 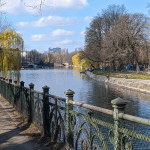