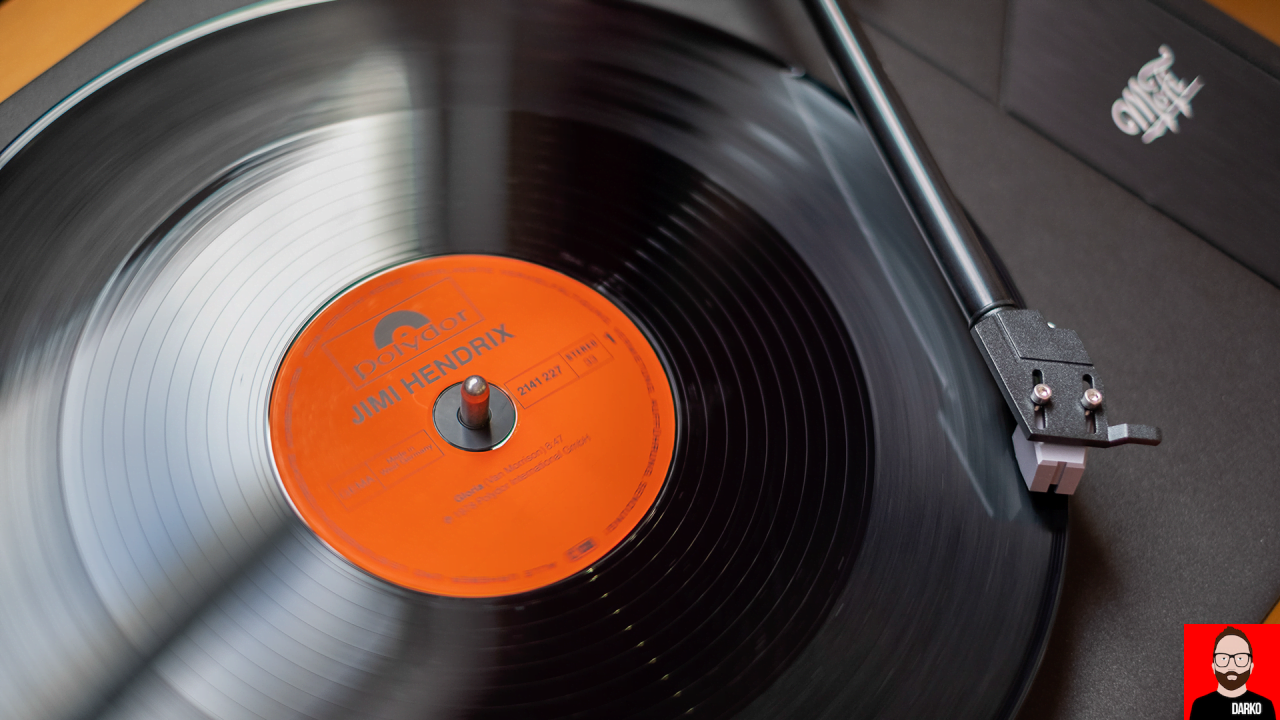 I want very few things from a turntable. Non-fiddly setup, solid build, solid feel, minimal design (hold the bling), and good sound. These past months using the Mobile Fidelity StudioDeck turntable had me wondering – did someone at MoFi read my mind? A peek into my innermost thoughts and desires?

Reason suggests MoFi designed the StudioDeck turntable with someone very much like me in mind and my best guess suggests there are a lot of us out there, people who share the same simple set of desires when it comes to spinning records. More than any other piece of hi-fi gear, we have to interact with a turntable. There’s lots of touching going on, some of it requiring real care, so we’re not talking about an occasional twist or poke, we’re talking about a meaningfully touchy relationship. If your turntable makes you nervous because you might break its delicateness with your fumbly fingers or maybe it makes you feel you’re really not good enough to play in its league, you may as well get a divorce. Sell the damn thing and find your true love. 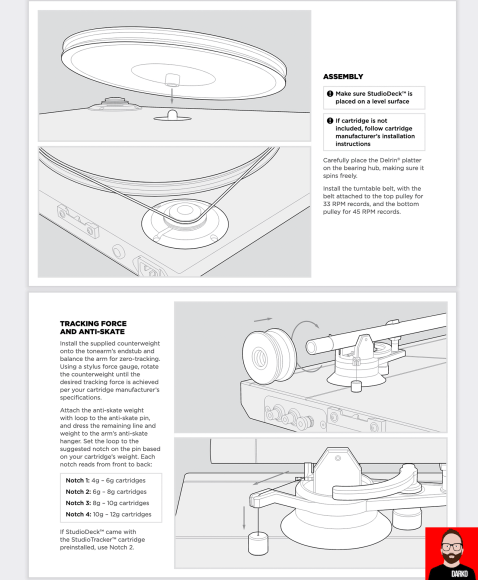 The StudioDeck’s 10-inch straight aluminum gimbaled bearing tonearm offers adjustment for tracking force, VTA, azimuth, and anti-skate. But, if you stick with a MoFi ‘table + cartridge package, VTA and azimuth are set at the factory, which is how the review unit arrived. The remaining setup tasks are about as challenging as assembling a 7-piece puzzle. They include putting the Delrin (a thermoplastic from Dupont) platter, the orange platter belt (a nice touch of color), counterweight, and anti-skate hanger in their proper places. Once assembled and situated, I used a bubble level to make sure the ‘Deck was perfectly level, adjusting the anti-vibration feet, developed in conjunction with Harmonic Resolution Systems, accordingly. Next, I used an (old) Expressimo/XMT-300 Stylus Force Gauge to dial in the correct tracking force for the UltraTracker cartridge (1.8–2.2g) and connected the included MoFi RCA cables to the ‘Deck and my hifi. I kept the included dust cover off when playing records.

Now…I know guys with ‘tables who ask a friend to cue up their records after they’ve had a bit too much to drink. A cartridge with its teeny tiny stylus is a delicate creature and if your record player doesn’t include an arm lift, play sober or hand over your cues to a friend. Friends don’t let friends cue drunk. The SudioDeck’s silky smooth arm-lift offers a reassuring amount of resistance with no play, no wiggle room in its movement, which instills confidence when cueing. The StudioDeck, as a whole, feels solid and substantial thanks in part to its plinth, which is made from an aluminum plate bonded to an MDF body. 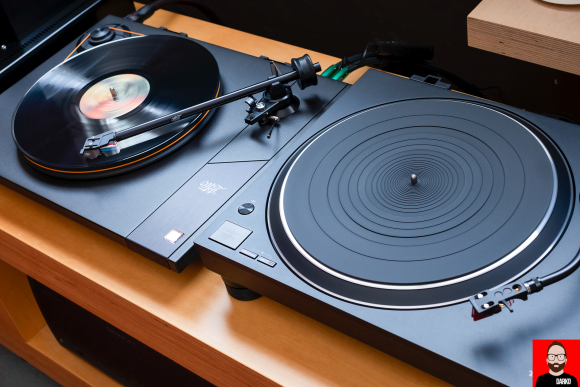 The StudioDeck plays full-length records and 45s, and similar to my Rega P3 (2000), you need to manually move the belt’s position on the MoFi’s two-position Delrin pulley to change speeds. Unlike my P3, you don’t have to remove the ‘Deck’s platter to do so, which is one small step for man, and one giant step for convenience. I will say, in no uncertain terms, that the MoFi was a pure pleasure to use and we developed a real rapport during its Barn stay. That said, I tried not to get too attached, seeing as I knew, going in, that this was going to be a short-term fling. Reviewers have to be cold, heartless bastards.

A record player also has to be good at playing records and I am happy to report that the MoFi StudioDeck is a champ in this regard. Compared to the recently reviewed Technics SL-1500C, I found the StudioDeck consistently offered a weightier and more compelling sound. I mentioned Jimi Hendrix in that Technics review as being a life changer and this effect wasn’t limited to the music and message of The Jimi Hendrix Experience (or Band of Gypsys). I read everything about Hendrix I could find, and remember we’re talking about the 1970s so finding things to read meant real research and trips to the library and bookstores. The idea of typing “Jimi” and being presented with a nearly endless amount of information without ever standing up was not even a whisper of a possibility.

Anyone who enjoys the music of Jimi Hendrix knows that his playing came out of a traditional blues background. When I read about this influence back in 1973, I went on the hunt for a record and bought The Great Blues Men, a double LP filled with a wonderful assortment of blues players, wonderful in that the compilation included the famous, like Muddy Waters and Lightnin’ Hopkins, to the less famous, like Mississippi John Hurt and Skip James, to the lesser-known like the Mance Lipscomb and Johnny Young. And I was hooked, line and sinker. I poured over the liner notes that included brief bio’s of every player and spent real time studying the wonderful collage cover by artist and musician Eric von Schmidt.

The Great Blues Men – which includes “Four Day Creep” by Ida Cox so we’re really talking about great blues musicians – acted like Jack’s magic beans, sending sprouts out in many different directions, leading me to new music for years. The rich history and discography of traditional blues are vast and contain some of the music I love best. It’s worth a mention I find this music is best served on vinyl – streaming Skip James just doesn’t cut it sonically or experientially the same way a Kindle copy pales in comparison to reading the first edition of Naked Lunch. At least for me. As I build a new record collection after my last purge, The Great Blues Men was among my first re-purchases, and I found a sealed copy for a few bucks without having to stand up.

I remain amazed at how much energy a solo performer with a guitar can generate. The Reverend Gary Davis is represented on this record by his most famous song “If I Had My Way (Samson and Delilah)”, and if you haven’t heard it, you haven’t heard anything like it, the song’s lyrics and Davis’ stunning vocals and guitar buzzing with conviction, “If I had my way … I’d tear this building down.” The StudioDeck presented the Reverend and the various other voices contained on The Great Blues Men with real authority, weight, and drive. Playing through the Parasound JC 3+ / Constellation Integrated 1.0 / Perlisten R7t speakers, all of these extraordinary musicians felt embodied in Barn, and if I closed my eyes it was easy to completely connect with every nuance of their playing and singing and travel back to my bedroom in 1973 where I sat with these great musicians who let me know the important work that can be done with an acoustic guitar to tell real stories. When I hear most of the current crop of so-called blues music, much of it sounds like flies buzzing around an empty jar of honey with no real purpose in mind. 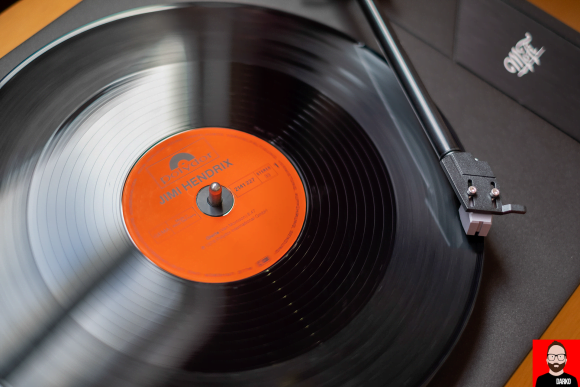 One of my favorite Hendrix records is the 12” 33rpm maxi-single “Gloria” with “Hey Joe” on the B-side released by Polydor West Germany in 1978. This is a very good sounding record and captures Hendrix at his most playful lyrically, while his guitar work is at peak power. With the StudioDeck reading the grooves, Hendrix’s guitar sounds perfectly monstrous – big, fat, and powerful – with Mitch Mitchell and Noel Redding providing a solid foundation. Compared to the Rega P3 (2000) with the Nagaoka MP-110 MM Cartridge, the MoFi StudioDeck offered greater detail and clarity throughout the frequency range, delivering a clearer picture of the music being made. I find the StudioDeck’s overall sound to be more compelling than the Rega or the Technics SL-1500C, as it seems to offer the precision of the Technics with the weight and heft of the Rega. Goldilocks would approve.

Moving to more recent music-making, Lonely Guest, which is producer and hip hop pioneer Tricky and guests including Lee “Scratch” Perry, Polish singer Marta Złakowska (Marta), Idles frontman Joe Talbot, Manchester collective leader Murkage Dave, Dutch-Zimbabwean musician Rina Mushonga, Maximo Park’s Paul Smith, and Brooklyn’s Breanna Barbara, is a perfect slow groove of a record. Released on False Idols in October 2021, Lonely Guest is also a very good sounding record and effortlessly moves between genres with each guest providing a different voice and sound, and the fact that this music resides on a cool slab of white vinyl doesn’t hurt the overall experience. The StudioDeck took on all the moves and grooves contained in Lonely Guest with ease, sounding full, fit, fluid, and fat (where called for). 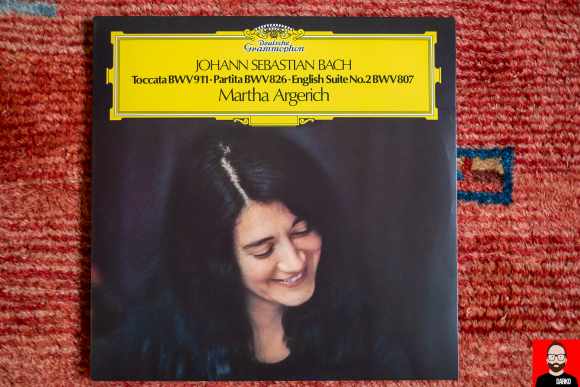 If I were forced to pick just one Bach solo piano record, I’d pick Martha Agerich’s take on the Toccata BWV911, Partita BWV826, and English Suite No.2 BWV807, released on Deutsche Grammophon. Of course, no one is going to force me to buy just one Bach solo piano record, but new records don’t come cheap, this one costing around US$26. So my record-buying budget means I can’t buy every Bach solo piano record I’m interested in. Woe is me. But this is a very good point, and one that’s been made by Darko (over and over like a broken…) – records, especially new records, cost real money, so building a collection takes real-time and significant cash. I chose to buy Martha Agerich’s take on Bach’s solo piano works because it is among my favorite records, period. The MoFi deck did a wonderful job of delivering the weight and body of the piano’s resounding soundboard while it kept pace with Agerich’s stunning keyboard work on both hands.

One of the great wonders of the world, at least to my mind, is how a human can perform this music, making the effort involved, both physical and mental, appear effortless. I raise a glass to Martha Agerich’s artistry and the fact that we can own this particular slice of heaven, to have and hold.

Listening to records with the StudioDeck in charge over the course of weeks and weeks, it became very apparent that the MoFi’s real strength lies in its combination of detail retrieval and musical body. Add in its very solid feel, super simple setup, and no-nonsense design and we have a turntable + cartridge package that I can confidently recommend to anyone looking to get started on the path of record collecting or who is looking for a ‘table that honors the life-changing work contained in an existing record collection. 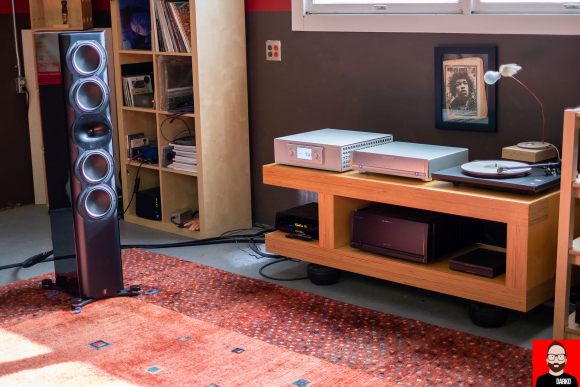 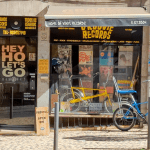 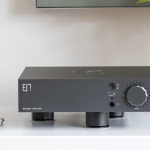