Where is Spotify HiFi? This question I’ve been asked more than any other since the Autumn. I know no one at Spotify. And if I did, there’d be ten+ thousand publications getting the scoop alongside this one. In other words, I’ve no idea. And neither does anyone else (beyond those working within the Swedish company’s inner circle).

Let’s recap. Spotify’s lossless CD-quality music streaming tier – minus hi-res content – was announced in February 2021 with Billie Eilish and Finneas playing brand ambassadors. In the immediate wake of the HiFi announcement, I predicted that Spotify would fold CD-quality streaming into its Premium tier i.e. no extra charge. Three months later, Apple Music made certain of that: it added lossless streaming – with a smattering of hi-res content – into its then singular US$9.99/month tier. How could Spotify not follow suit?

Since then, we’ve heard nothing but crickets from the Swedes on Spotify HiFi. The year bowed out without a whiff of an update on Spotify HiFi’s progress. However, last Friday we were thrown a bone by way of a short statement on Spotify’s Community forums:

We know that HiFi quality audio is important to you. We feel the same, and we’re excited to deliver a Spotify HiFi experience to Premium users in the future. But we don’t have timing details to share yet.

We will of course update you here when we can. 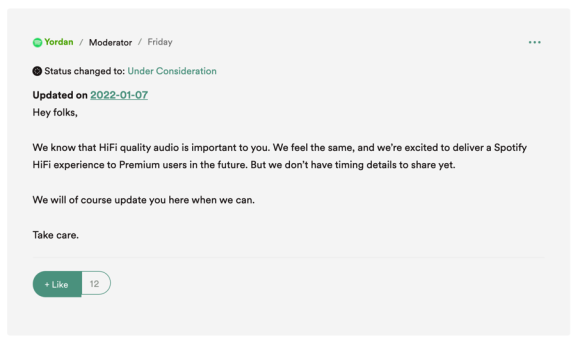 So now you still know as much as I do – that HiFi will be folded into the Premium tier – but don’t hold ya breath on its launch being imminent. The news is: there is no news.