Samsung owns Harman, Harman owns the JBL brand and the JBL brand has just announced a new streaming active loudspeaker – the catchily named 4305P – that promises to straddle pro-audio and home listening environments. Pull up a chair. We’ve got a lot of tech to get through.

It’s almost impossible to judge the dimensions of a JBL loudspeaker from its press shots (which are actually renders). The plain color backgrounds reduce all models to the same nebulous size. The 4305P could be a pint-sized standmount (like the 4309) or they could be a much larger beast (like the 4349). The 4305P’s 5.25″ fibre composite driver ends the guessing game. That mid/bass unit is mounted in a cast frame, gets its bass extension from a pair of front front-firing ports and is crossed over to a 1″ 2410H-2 compression driver, mounted behind a ‘High-Definition Imaging’ horn, for “crystal-clear” highs. In other words, this new JBL is a standmount loudspeaker for which we will need stands if we’re not placing them on top of a recording studio console.

The Harman engineering team has activated this two-way with Class D amplification: 25 Watts on the compression driver, 125 Watts on the mid/bass driver. From the press release: “Custom tuning allows a level of refinement and accuracy from the 4305P that is simply not possible with a passive loudspeaker.” We are hearing this message increasingly often from loudspeaker engineers: that all other things being equal, an active crossover network comes with fewer compromises than a passive. 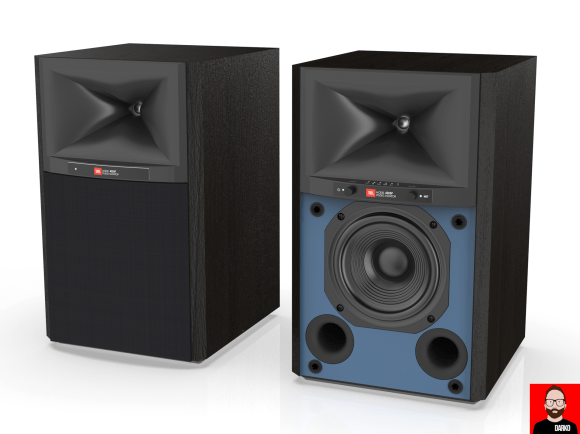 Getting music into the 4305P is a multi-faceted affair. A combo XLR / 1/4″ TRS phono connector and 3.5mm socket take care of analogue sources. Asynchronous USB allows us to hook up our laptop or network streamer. A TOSLINK socket keeps our TV in play. And let’s not forget the IEC socket that connects each loudspeaker to the mains. However, it’s this loudspeaker’s internal streaming smarts that are most likely to turn heads. Say hello to Roon Ready, Apple AirPlay 2, Google Chromecast Built-in and Bluetooth.

Bridging the streamer and amplification inside each loudspeaker cabinet is an unspecified 24bit/192kHz (and MQA-capable) D/A converter. That cabinet, by the way, is made from 3/4″-thick MDF, is internally braced and sports a real wood veneer finish. Your choice of Natural Walnut (with a blue grille) or Black Walnut (with a black grille).

Per KEF’s LS50 Wireless II, a pair of 4305P ships with one primary and one secondary loudspeaker where a simple switch takes care of left/right channel assignment and basic remote control functionality comes from the supplied Bluetooth wand. Otherwise, we’re using a smartphone or tablet to control streaming sources. The primary speaker hosts front panel controls for volume, mute, input selection and Bluetooth pairing. Wireless tethering between primary and secondary speakers permits streaming up to 96kHz. A hard-wired Ethernet connection kicks that up to 192kHz. Go on, admit it: only a few percent of your music library is encoded at anything higher than 96kHz. 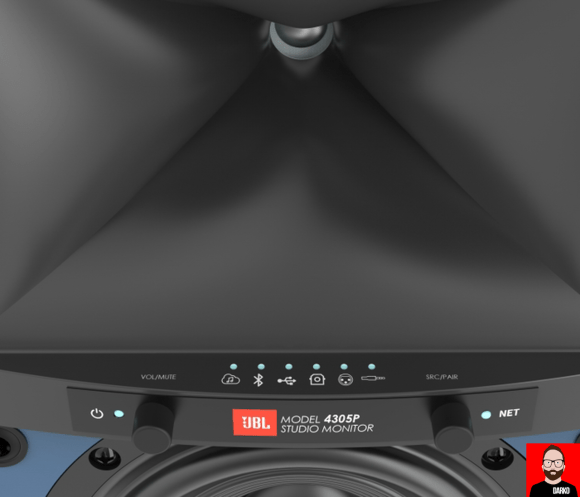