Anyone who thinks that experience doesn’t count should try setting up a subwoofer. Four weeks into the Elac SUB3030 review I was still making adjustments, never quite sure I’d got it right. Six weeks later Rob Hunt of REL set up two of his company’s recently introduced T/5x subwoofers – one per channel, each with different settings – in the same system in 30 minutes. And he nailed it, everything sounding right from the off. Part of me was impressed, part was cursing. A shame that the ELAC sub is now long gone, I can’t help but think that adopting the same setup approach as Rob Hunt would have it sounding better. My second foray into subwoofers – this time with REL – was certainly more fit n’ forget than fit n’ fiddle.

A single driver fires downwards. The driver is the same size as the one in the previous T/5i from which the T/5x is derived, but its greater throw means it can, according to REL, play louder. The driver’s suspension and several internal components have also been upgraded. The net result is a slightly larger subwoofer, but REL says the T/5x looks smaller “thanks to good design”.

With no T/5i to hand, I can’t say exactly how the T/5x compares visually. I can say the T/5x is an absolute beaut of a unit. It’s positively dinky at 300x307x313mm (WHD), and whether in Piano Black or High Gloss White it looks like a million dollars. The absence of a grille helps. As do rounded edges, smart metallic feet and a five-layers-of-lacquer gloss finish that’s just WOW! Very impressive indeed.

The rear sports the inputs, fins to cool the amplifier, a wireless connection socket, phase switch and a standby/always-on switch (220V models only). Then there’s the gain and crossover controls. Spikes are not provided, indeed there’s no provision for them. REL is happy for the T/5x to fire onto carpet (as I did). Oh — and don’t even think about stacking any of the T/x range – the top one(s) will go walkies thanks to vibration (other models are designed to avoid this). 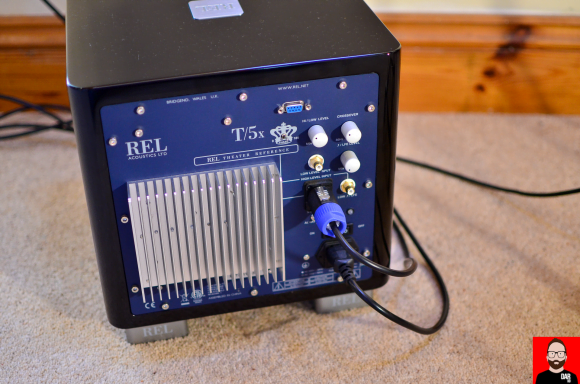 REL prefers High Level as the subwoofer gets the same signal as the speakers, reportedly improving the sub’s integration. For the AV folks, there’s also a Low Frequency Effects (LFE) input, to be used in conjunction with the other inputs: a High-Level connection to your speakers and an RCA cable from the amplifier’s LFE output to the subwoofer for example.

Two subwoofers mean connecting one to each loudspeaker channel: left and right. With a single T/5x in play, we connect it to just one of the channels because, according to REL, bass content is assumed to be the same on each channel. This also sidesteps any potential problems with monoblocks or balanced differential amplifiers where the High-Level connection of a single subwoofer to both channels creates a common earth that might fry your amplifier. The risk is real folks, I had a close shave with an early REL. If in doubt, consult your dealer (REL has a wealth of information on the subject). 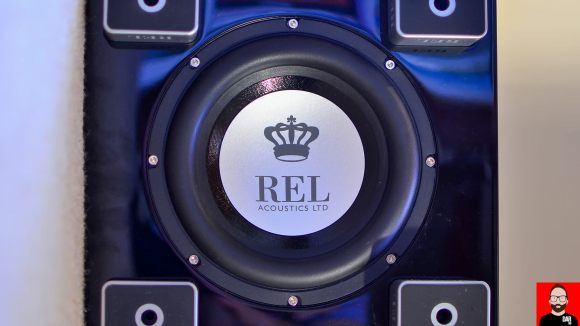 REL’s optional Arrow system brings wireless connection. Comprising transmitter and receiver (both need power) the receiver plugs into a dedicated socket on the T/5x. The transmitter connects ideally via High Level to your amplifier’s speaker terminals. There’s also an LFE input on the transmitter for AV system integrators, which can be used to connect Low Level if really needed. If so you can’t use LFE as well.

Sound quality is said to be the same as wired. REL even says that one subwoofer can be run wired and the other wireless. I didn’t have the Arrow system so I can’t verify that claim but an uptick in a subwoofer’s connectivity options is to be applauded.

For this review, I used both single and dual T/5x subwoofer configurations in wired mode. With one in play, I need to nudge the gain just slightly.

Setup
To recap: you juggle subwoofer position, crossover frequency, gain and phase until you get optimal sound. Rob Hunt has set up countless subwoofers so took it all in his stride. I lent a second pair of ears. I know not which parts of the process made the most difference but the end result spoke for itself. 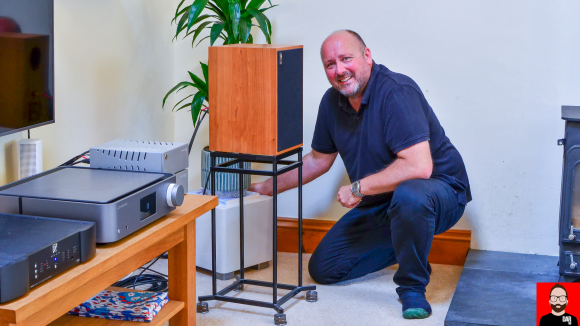 There’s no scale on the crossover control, nor is it linear. This means you don’t know precisely where the level is set, you have to trust your ears. Helpfully the control does at least click – 40 steps from 30 Hz to 120 Hz – meaning you can replicate alternatives during setup.

My 2 x T/5x were set at 11 clicks from the bottom – around 60Hz according to Rob. Big point – that’s a lot higher than the 40Hz I had the Elac at. Wouldn’t the REL sub overlap with the main speakers too much at 60Hz? Apparently not. The crossover between the T/5x and my main speakers – Graham LS6 – sounded seamless.

On positioning, corner placement is recommended – see photo above. For the precise position, Rob Hunt adjusted things manually, one hand on the T/5x’s corner, another on its side. Small adjustments were in order, when the T/5x resonated with the room it was in the right position.

Phase and gain were then locked in by ear, the former set to 180° for my system. The left subwoofer’s gain was three steps higher as it’s open to the room (the gain control also has 40 clicks).

It took our man from REL – someone with significant experience in this field – a mere thirty minutes to dial in both subwoofers. 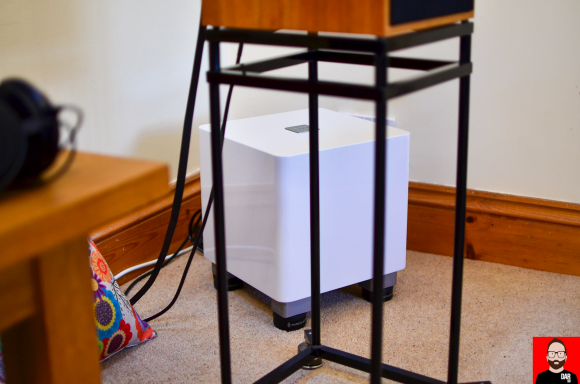 Listening with a single T/5x
All listening was done with a Cambridge Audio Edge NQ streamer/DAC/Pre (£4,500) feeding dual Gold Note PA-10 power amplifiers (£1,400 each) into Graham LS6 standmounts (£2,300). The T/5x was suggested by REL as a good match for the Grahams.

Even during setup, I could hear the T/5x making a difference. And not just low down, the soundstage opened up (and quite noticeably), even when there was very little bass content in the music. How can a subwoofer improve solo acoustic guitar? However, I’ve heard REL demonstrate this at shows on many occasions. And the improvement was as real then as it is in my lounge room: the increased space around musicians, the deeper soundstage, the greater clarity — they’re all obvious.

Other examples: Sean Shibe’s classical guitar on Camino or Cande Y Paulo’s take on Leonard Cohen’s “Treaty”. They all sound more ‘in the room’ with the REL in the circuit. Clearly, the T/5x benefits all music, not just that with low-bass content. 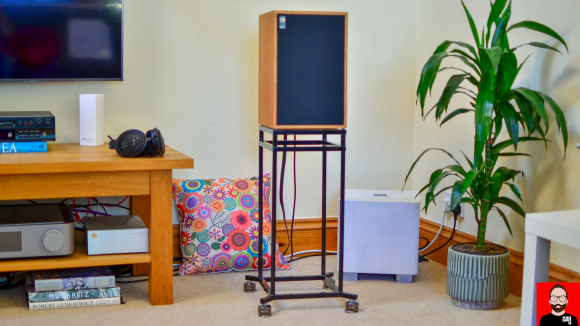 A change of pace has me cueing up Steve Hackett’s just-released Surrender of Silence. The sound is enormous, helped by a big orchestral backing; Hackett’s early-Genesis pomp lives on. Without the REL it sounds great. I then re-introduce the T/5x and everything scales up. And significantly so. At which point we realise the lower frequencies had much more to say.

Ditto ambient music and film scores. Abraham Marder’s Sound of Metal from the film of the same name is awash with low-frequency energy, the foundation for everything. Without the REL in play, the sound is a bit polite. With it, there’s real menace to proceedings. Similarly, on A Winged Victory For The Sullen’s Invisible Cities where the REL subwoofer makes it crystal clear that pulsating low synths are its bedrock.

Integration with the Graham LS6 standmounts is excellent. REL claims its driver and filter technologies combine to deliver fast bass. Bass that starts and stops quickly, with no overhang. That helps integration with the main speakers. The claims are borne out in practice, I soon forget there’s a subwoofer in the system. The T/5x’s grand illusion is that it appears as if the Grahams themselves are reaching lower.

Time to see what a second T/5x does. 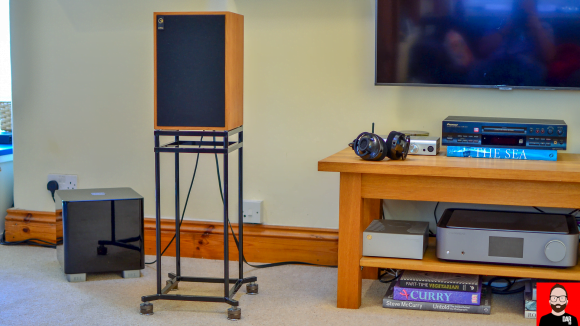 Doubling down
First up, the bass goes lower still. The 2nd slow movement of Saint Saens’ ‘Organ Symphony No 3’ (Munch, Living Stereo), growls with deeper throatiness. As do the opening pulses on James Horner’s “Cosmo – My Old Friend” from the Sneakers soundtrack. They’re more distinct, fuller, more impactful. Is the soundstage even bigger too? Hold that thought.

Onto another low-end warhorse: Massive Attack’s ‘Angel’ from Mezzanine. Its bass lines reach deeper to become more intelligible with two RELs in play. On Hans Zimmer’s Inception there’s appreciably more weight than with one T/5x. Overall the second T/5x makes itself heard, subtly in a positive way. The improvement is incremental, not night and day, but there is no doubt that it adds to the musical engagement.

Similarly on Shinya Fukumori’s For 2 Akis, where the cymbals on ‘Hoshi Meguri no Uta’ are more delicate with two RELs (than one). We hear the same from Michel Petrucciani’s live “Bimini” (The Blue Note Years); Jim Hall’s mastery of his guitar is even more apparent.

It is crystal clear to me that two REL T/5x sound better than one. 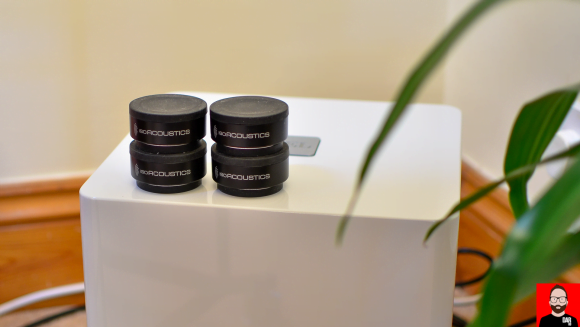 Tinkering
Returning to a single T/5x but one that now sits on four IsoAcoustics IsoPucks, which work their magic as they did with the SUB3030: image focus is clearer, less smeared; bass is a tad tighter. Take the thundering low-end of Grace Jones’ “This Is” (from Hurricane), which achieves a level of articulation I’d not heard before having the T/5x in my system. The slight-bass-for-the-sake of it feel has gone, there’s some really intricate playing going on in the lowest frequencies.

On the aesthetics, the T/5x looks slightly ungainly sat atop the IsoAcoustics pucks but it’s an aesthetic compromise I’d personally accept given what we gain in audible performance from their inclusion.

Conclusions
The REL experience was wholly positive. One T/5x brought a step change to my system, the second incremental improvement. In both cases, bass went lower whilst maintaining seamless integration with the main speakers. The soundstage opened up considerably too — a concept I’d struggle with if I hadn’t heard it myself. That my only complaint is a rear light on the T/5x that’s too bright says a lot.

Rob Hunt’s initial setup undoubtedly smoothed my experience. If only you could bottle his know-how. REL’s website has a lot of advice, many videos, which may be the next best thing. Go explore.

Two RELs sound better than one but if like me, you don’t have the floorspace then one T/5x is still very much worthwhile. Alternatively, REL’s similarly compact T/9x goes 5Hz lower than the T/5x: a single box that sells for the same as 2 x T/5x.

It’s going to be very difficult to live without the T/5x (which I might not).