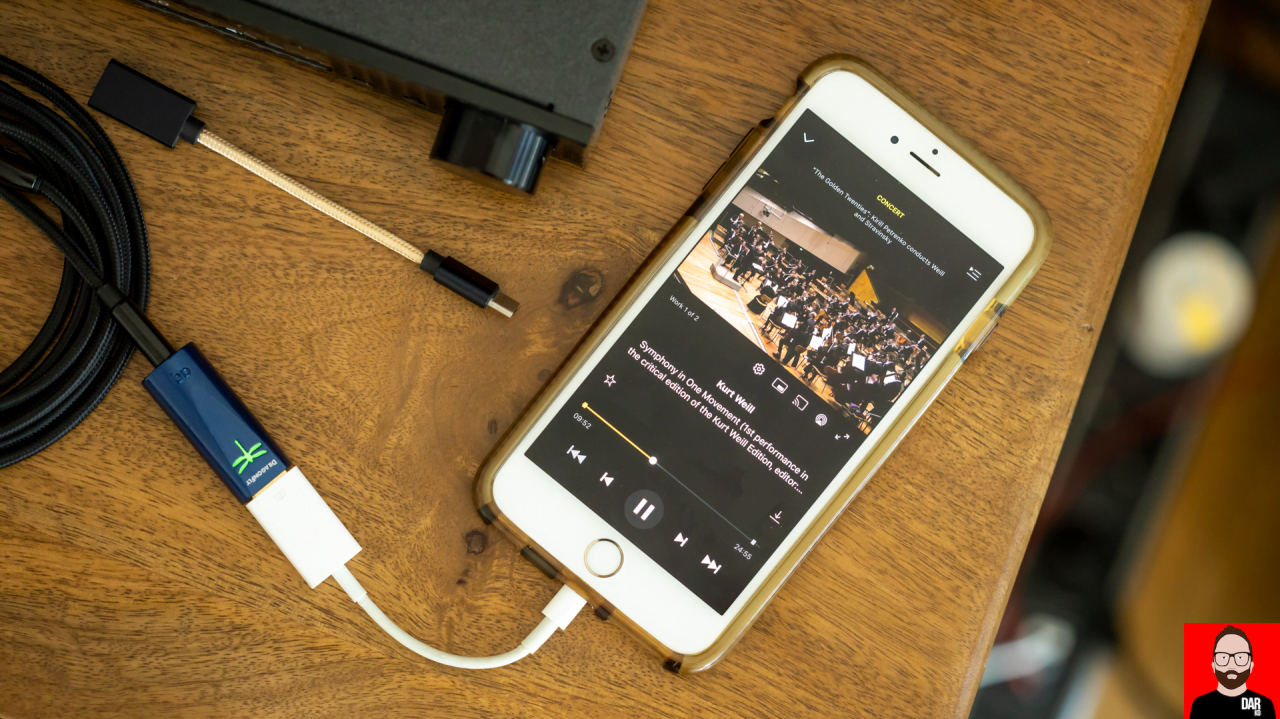 2021 will be remembered as the year that streaming services kicked audio quality up the stairs to lossless. First came Spotify’s announcement that they would be adding an option for CD-quality streaming sometime later this year. Pricing would remain TBC. A few weeks later came Apple Music’s announcement that they too would be streaming losslessly (with a smattering of hi-res audio content) from June 2021 but at no additional charge to customers: US$9.99/month.

Today we learn that the Berliner Philharmoniker’s Digital Concert Hall (DCH), working in collaboration with Internet Initiative Japan (IIJ), has added a lossless FLAC option to the audio portion of its video streams. The Digital Concert Hall offers ‘hundreds’ of concerts for instant playback, with the most recent additions filmed using 4K cameras and – for the 2021 season – under ‘socially distanced’ conditions. Echoing Apple’s announcement, this upgrade comes at no additional charge to subscribers: €14.90/month or €149.00/year.

From the press release: “As the world’s first streaming service, the platform now combines an ultra-high-definition video signal (UHD) with a lossless transmitted audio signal in studio quality. For the online audience, Hi-Res Audio guarantees an acoustically authentic concert experience – without data loss, unadulterated and direct as if from the recording studio of the Philharmonie. Hi-Res Audio is already available in the Digital Concert Hall mobile apps and for Apple TV, and will soon be available for other TVs and the website.”

Accordingly, beneath each concert’s introductory blurb displayed on iOS and Android devices are two logos: one for ‘4K UHD’ and one for ‘Hi-Res Audio’. The settings pane allows us to select ‘hi-res’ (lossless) or ‘standard’ (lossy) for wifi and cellular, the latter separated out to avoid wiping out one’s monthly data allowance whilst out and about. These settings can also be accessed via the cogwheel beneath the video stream window.

What is not shown in the Digital Concert Hall’s iOS and Android apps is the incoming audio stream’s sample rate (and bit depth). Instead, we defer to the (likes of the) AudioQuest DragonFly Cobalt whose smartphone agreeability and colour-coded LED help fill in one of those blanks. Connected to an iPhone 6S Plus (iOS 14.6) using Apple’s Lightning-to-USB adapter and pushing play on the latest addition to the Digital Concert Hall (‘Susanna Mälkki conducts “Bluebeard’s Castle”’), the Cobalt’s light turns green to indicate a 44.1kHz stream: 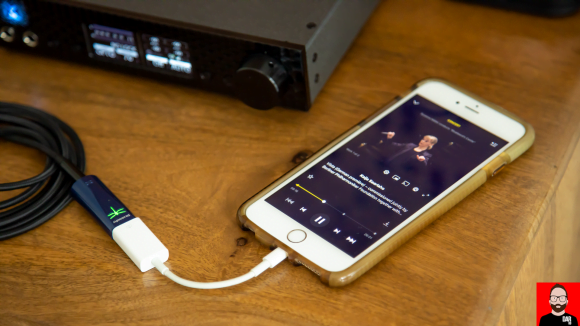 One advantage of iOS is that it offers automatic sample rate switching. If the incoming stream is 96kHz, the sample rate of the stream pushed out of the Lightning port will also be 96kHz and the Cobalt’s LED will glow light blue. If it’s 48kHz, 48kHz is what will leave the smartphone and the USB DAC’s LED will turn blue.

Surprisingly, the Cobalt’s light remained green as I moved backward through the Digital Concert Hall’s latest additions. Going deeper into the archive and picking concerts at random, I could not budge the Cobalt from 44.1kHz green (see header image). This suggests that (at launch) the majority of concerts are streaming in CD quality. This runs contrary to the press release’s ‘hi-res’ spin and the supplemental information supplied by my contact at the Berliner Philharmoniker:

“Currently, all concerts are offered at 24bit/48kHz. Additionally, some of our finest concerts of this season have been chosen to play at 96kHz. These include concerts with our chief conductor Kirill Petrenko, Semyon Bychkov, Zubin Mehta or Daniel Barenboim. All concerts from summer 2019 onwards should soon be available at 24bit/96kHz. The 48kHz versions will be replaced. In the future, every new concert will be at 96kHz.”

Without a sample rate display inside the Digital Concert Hall app, it’s impossible to know what we should be getting. Thinking that my iOS setup might be faulty, I pulled up two streams from the Qobuz app, one at 48kHz and one at 96kHz. They turned the DragonFly’s LED blue and light blue respectively to confirm that all was as it should be. Note how the Qobuz app shows the stream’s sample rate and bit depth:

Where this scene gets even fuzzier is when we step back to consider that the DragonFly Cobalt’s green light does not guarantee a lossless stream; lossy streams from the ‘standard’ audio setting also turn the DragonFly-shaped LED green. Not that I am suggesting nefarious intent by the Berliner Philharmoniker’s digital arm. Lossy streams pulled from Spotify or Apple Music would also show up as ‘Green 44.1kHz’. There is no separate colour for lossy encoding. This doubly emphasizes the importance of detailing stream quality within the playback app.

The Berliner Philharmoniker offers no desktop apps and instead invites us to stream via a web browser where hi-res audio functionality is still to be rolled out. Here that sample rate specificity becomes even more crucial because neither Windows nor macOS offers automatic output sample rate switching. We must do it manually. Why does that matter? If the incoming stream’s sample rate is 44.1kHz but our OS’s sample rate is set to 96kHz, we end up upsampling the stream before it sent out to the DAC. Flip those numbers around and we find ourselves downsampling prior to DAC dispatch – we’ve effectively taken a hi-res file and turned it back into a CD. Unless the incoming stream’s sample rate and the OS’s sample rate are numerically aligned, bit-perfect playback goes out of the window.

We meet upsampling again when streaming Digital Concert Hall (or Apple Music or Spotify) content on Android devices. Google’s operating system resamples every incoming digital audio stream to 48kHz – irrespective of its original sample rate – before sending it out of a smartphone (or tablet’s) USB port. Connecting the AudioQuest dongle DAC to an LG V40 confirms as much: I push play again on ‘Susanna Mälkki conducts “Bluebeard’s Castle”’ to see the USB DAC’s light turn blue (when it should really be green). The 44.1kHz stream that we saw on iOS was being upsampled by the Android OS to 48kHz. 96kHz are downsampled to 48kHz.

Handing off the same AV stream to a Xiaomi Mi Box S using the Chromecast protocol nets the same end result. The Mytek Brooklyn Bridge plays catch on the Xiaomi’s TOSLINK output to show a 48kHz sample rate. Why? The Mi Box S runs Android TV, a derivative of the smartphone OS. It too resamples outbound digital audio to 48kHz for TOSLINK dispatch (and 96kHz for USB). It isn’t just Chromecast. Streams pulled down from the cloud by native Android TV apps are resampled to 48kHz or 96kHz. Bit-perfect hi-res audio is a crapshoot on Android or Android TV unless we revert to Tidal or Qobuz wrapped in an app like UAPP that loads in its own USB driver.

Side note #3: The Digital Concert Hall is also accessible via a native app running on Apple’s TV OS but without an HDMI-equipped DAC that also reports on incoming sample rates, I am unable to test it.

Going back to the iPhone to send Digital Concert Hall streams to a nearby NAIM Muso reminds us that AirPlay 2 also kneecaps hi-res at 48kHz. According to this Forbes article, Apple AirPlay 2 supports up to 48kHz but downsamples it to 44.1kHz. We can only assume that 44.1kHz content is left untouched. Right now, this is a non-issue for Digital Concert Hall content but it’s a reminder that AirPlay 2 is a no-go for anyone wanting to maximise the potential of hi-res content streamed from Apple Music or the Berliner Philharmoniker archive at 48kHz or 96kHz (should it materialise).

To summarise: hi-res streams are compromised by all Android devices, by Apple AirPlay (which pulls the stream through the smartphone), by Google Chromecast (which doesn’t play back gaplessly) and by web browsers running on Windows or macOS (where we must keep an eye sample rate mismatches). Only iPhones and iPads let hi-res run free to 192kHz and with automatic sample rate switching.

How much these sample-rate compromises impact sound quality is another matter. Resampling data rates might not have as much of a negative impact on what we here as lossy encoding but when a company’s marketing push hinges on hi-res audio streaming and not, say, recording or mastering quality where no numbering system exists, consumers have only sample rates to guide them. How those sample rates play with our existing hardware then becomes the pointy end of the hi-res streaming issue. And from where I am sitting, it’s all over the shop. This is as true for Apple Music and Spotify as it is for the Berliner Philharmoniker. 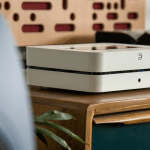 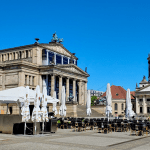