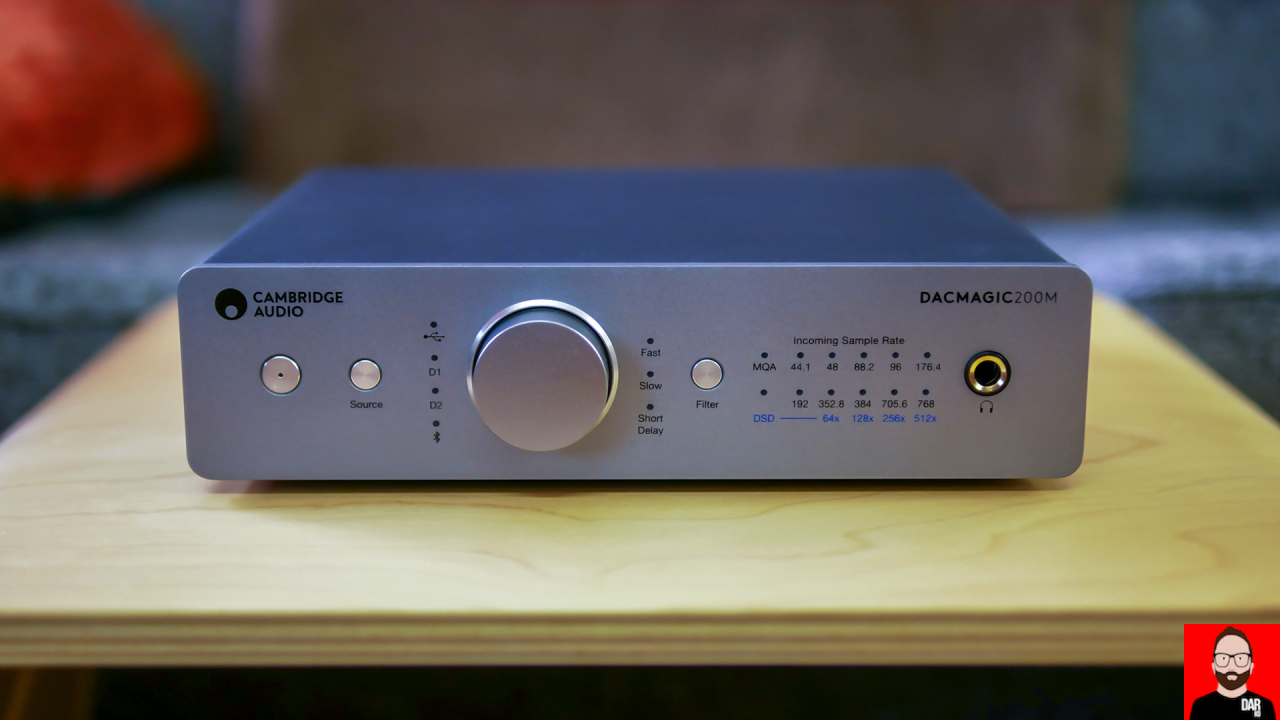 Publisher’s note: The 200M is the latest iteration of the well-respected DacMagic D/A converter from Cambridge Audio. Upon release, it attracted favourable reviews but when I got to hear one, I found myself more impressed by its connectivity than its sound quality. It failed to stack up against the competition: specifically, the Chord Mojo and the Denafrips Ares II. You can watch my video coverage here. I have therefore asked Twittering Machinist and Darko.Audio contributor Michael Lavorgna for a second opinion – JD

Once upon a time, a new DAC costing around US$500 was news. These days, the competition in and around this mark is fierce. Savage, even.

There are some pretty great DACs starting at $100, like the Helm BOLT. Heading north from there (and in ascending price order) we have the AudioQuest DragonFly Cobalt, the Chord Mojo, and the Denafrips ARES II. They are all solid examples of units that deliver great sound at their price point. In other words, they offer great value. To compete in this class, a DAC has to be outstanding in some way.

The Cambridge Audio DacMagic 200M is feature-rich, checking most boxes on today’s DAC to-do list: MQA, PCM resolutions up to 32-bit/768kHz(!), DSD256, Bluetooth (AptX), plus balanced and unbalanced outputs; a headphone output adds the final check. And the DacMagic 200M stuffs all of this stuff into a chassis measuring just 52 x 215 x 191mm, about the size of two really good books.

Digital to analog conversion is handled by a pair of ESS ES9028Q2M DACs, and Cambridge has opted to make its selectable filters (Fast, Slow, Short delay) selectable via a front panel button. The Lunar Gray aluminum front panel also includes a power button, a single-source selection button to choose from the USB, 2x Coax, 2x Toslink, and Bluetooth inputs, a big digital volume control knob for the headphone output, a total of 10 LEDs indicating the sample rate of the incoming music signal, 2 more to indicate MQA or DSD, and a 6.3mm headphone jack. The whole show is wrapped in a dark gray steel box. 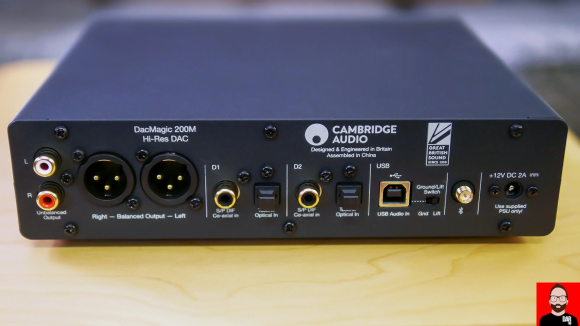 From a real-world perspective, MQA really means you have to subscribe to Tidal’s HiFi tier ($19.99/mo.) since it’s by far the largest source of MQA content. Seeing as no commercially available 32-bit/768kHz files or streams exist, such PCM heights are probably there for people who want to upsample their music before it gets to the DacMagic 200M, either using a hardware box (unlikely at this price point) or a software solution like Roon or HQPlayer.

Due to its long feature-set list, the Cambridge DacMagic 200M can sit at the center of a pretty busy hifi. I can easily imagine it handling the Toslink output from a flat-screen TV, Coax from a CD transport, and USB from a computer or network player, all feeding a hifi for in-room fun as well as more private, headphone-based moments. Among all of the DacMagic 200M’s traits, this rich feature set is its ace card.

In Barn, a Raspberry Pi 4 USB fed a Denafrips IRIS II Digital to Digital Converter which in turn fed the DacMagic 200M with coaxial S/PDIF. The resulting analogue signal was routed into a number of integrated amplifiers including the Schiit Ragnarok, Ayre EX-8, and a Cambridge Audio Edge A. All of these amps fed a pair of GoldenEar Triton Reference Towers. Everything was tied together with AudioQuest cables.

On a pure sound quality basis, I would rate the DacMagic 200M as being good for its price. It gets the job done without calling undue attention to itself. If I was to gauge the sound of the DacMagic 200M in isolation, I could easily walk away with nothing but praise for its punchy, taught, and wiry, muscular sound. In fact, I spent a few weeks mainly listening through it, and was never bothered, annoyed, or distracted, happily going about my daily music explorations and enjoyments more or less unfettered. 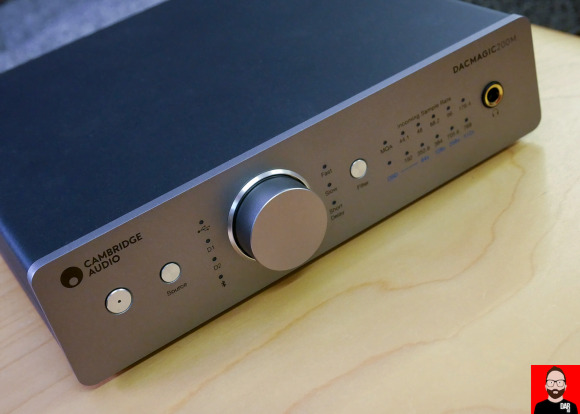 The thing is, it’s my job to not listen to anything in isolation, and I’ve spent the better part of 8 years, full-time, comparing this to that, and the other. The majority of those years were spent solely focused on digital replay. After reviewing well over a hundred DACs, which means living with and listening to each one in my system, it’s difficult to forget the excitement that some gear elicits.

The Schiit Bifrost Multibit DAC has been sharing the barn with me since 2019. Back then it cost US$599. The current incarnation of the Bifrost is US$699. Feature-wise, the Bifrost does not compete with the riches of the DacMagic 200M as it’s just a DAC, offering USB and 2x S/PDIF (Coax and Toslink) inputs, and a pair of single-ended RCA outputs. No headphone amp, no balanced output, no Bluetooth, no MQA, no DSD, and the Bifrost maxes out at 24-bit/192kHz. Old school.

When it comes to music and comparisons, I find the Bifrost offers more meat on music’s bones, making the DacMagic 200M sound comparatively lighter weight, presenting a skinnier version of the music at hand. The signal path for this comparison remained identical, with both DACs receiving their coax diet from the Denafrips IRIS USB DDC’s output. Apples to apples.

If you were to perform a quick A/B comparison between the Bifrost and DacMagic 200M, you might walk away thinking the difference in sound quality between them is rather slight, not really worth mentioning. However, longer-term listening – leaving the Bifrost in my system for a day or more before switching back to the DacMagic 200M – showed just how seemingly slight differences work over the longer haul. Absence made my heart grow fonder for the Bifrost and its more robust and compelling sound.

While it has been too many years since I’ve had a Chord Mojo (US$749) in-Barn for me to recall specific sonic traits in a meaningfully comparative way, I can easily recall my very pleasant surprise at its rather stunning way with music, as if the little Mojo was digging into every album like a miner with one of the brightest and most revealing lamps available anywhere near its price. So I am not at all surprised by Darko’s findings where he preferred the Mojo to the DacMagic 200M on a sound quality basis.

For DAC shoppers with a more elastic budget, I would recommend giving the Denafrips ARES II DAC (US$780) a very serious look and listen. The ARES II is also just-a-DAC, like the Schiit Bifrost, offering 2x Coax S/PDIF, 2x Toslink, and a lone USB input. The ARES II can operate in NOS (non-oversampling) or OS (oversampling) mode with two filter choices for OS mode, Sharp or Slow, and supports PCM sample rates up to a whopping 24-bit/1536kHz (!) and native DSD1024 over USB, while the S/PDIF inputs max out at 24-bit/192kHz. 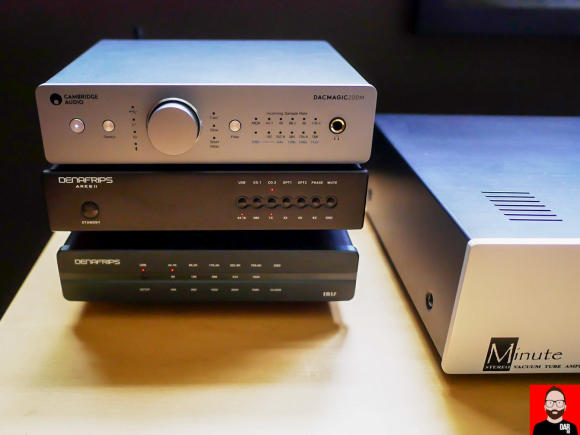 Features wise, the DacMagic 200M is the clear winner again, as the ARES II does not support MQA, nor does it include a headphone amp or offer a Bluetooth input (but it does do DSD).

When it comes to playing music, the Denafrips ARES II is my favorite sub-$1000 DAC by a very wide margin, and I’d be hard-pressed to find a DAC I prefer even if that budget were stretched by a few more grand. The ARES II presents music as a fleshy and resolute living presence, offering a level of excitement and delight that typically comes with a much higher price tag. Going head-to-head with the DacMagic 200M, the latter sounds pale as it does its best to tease out music’s kaleidoscope of tone colors. We might call it (comparatively) bleached. If you are the kind of listener who delights in hearing and feeling music’s full voice, which I have found leads to a more emotional connection, the ARES II is the clear winner here, albeit one that comes with a higher price tag.

For my listening habits and preferences, MQA and hi-res support are of little use, as the majority of the music I listen to is CD-quality, 16-bit/44.1kHz. Again: old school. I file Bluetooth support in a similar category, but I do think Bluetooth is a great friends-n-family feature, allowing anyone with a phone and music to connect to a hi-fi in seconds. I am also not a headphone listener because I very much prefer listening to music in a room. We purchased our current home because it offered a separate building, the Barn, where I work, listen, and play. If you take all of this into account, you can see why the DacMagic 200M’s excellent feature set fails to tickle my fancy.

The DacMagic 200M’s strengths lie in presenting a very clean, detailed, and dynamically punchy sound, coupled with its extensive feature set and US$499 price. All told, this combination of features, price, and performance may make it easy to forgive its audible shortcomings when sat next to slightly higher-priced rivals. 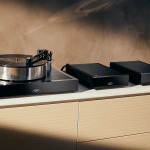 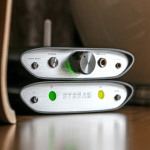