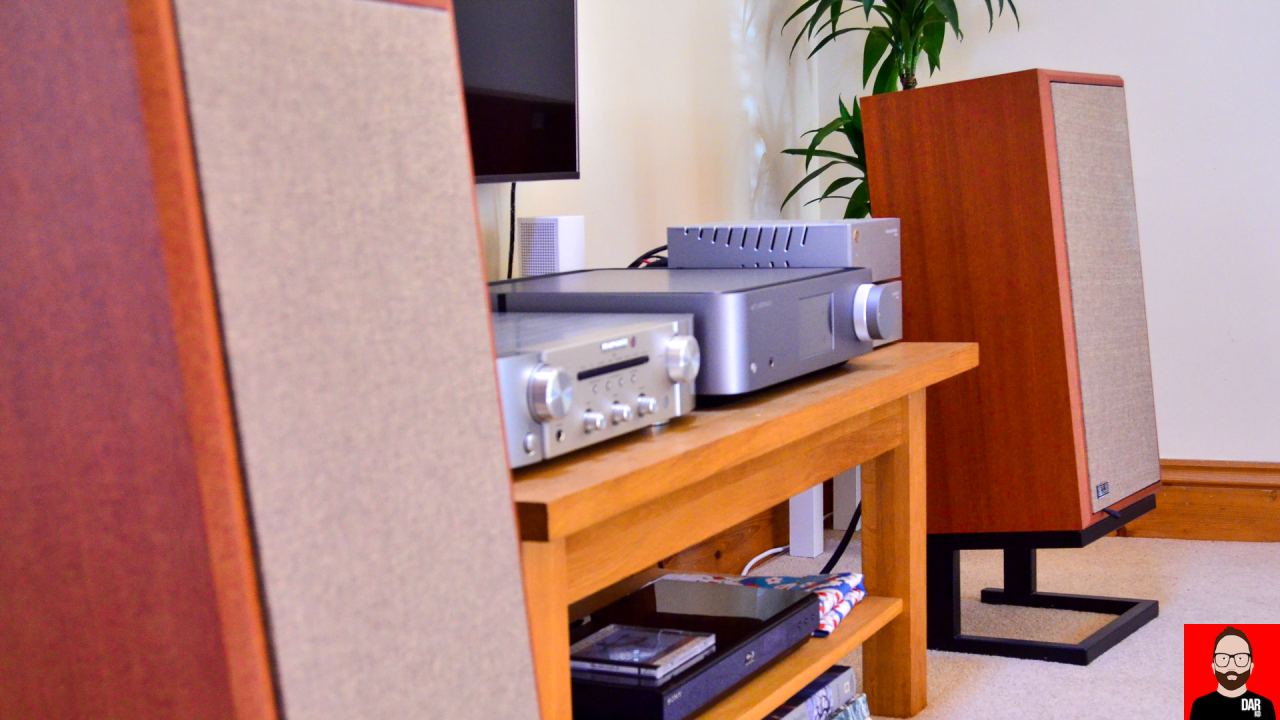 Formed in 1957 by Henry Kloss, Malcolm Low and Josef Hoffman, KLH would quickly find themselves shipping 30,000 pairs of speakers a year, making it one of the largest speaker manufacturers in the world. The company released some landmark products, including the Model Nine electrostatic – still venerated today – and the Model Five that cemented KLH’s success in the 1960s.

The brand was sold to Kelley Global Brands in 2017, a company set up by David Kelley (ex Klipsch & VOXX) when he grew bored of a golfing retirement (or so the story goes). Apparently, Kelley saw potential in KLH’s heritage and set about resurrecting the brand. The introduction of a new Model Five – marrying the design principles of the original to today’s superior componentry plus a 10-year warranty – appears to be a key step in that process. 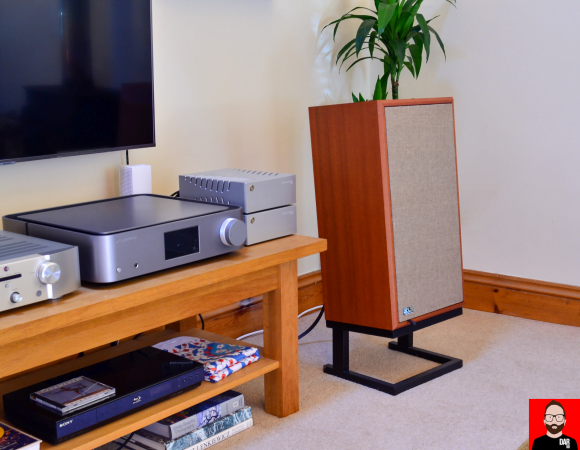 So what are they?
The Model Five are a large retro-styled three-way standmount loudspeaker that sits low and tilts gently backward on its custom stand. Sound familiar? JBL’s L100 Classic screams to mind. The KLH lack the JBLs’ chunky-cubed Quadrex grilles, instead sporting traditional framed-cloth grilles described by the manufacturer as ‘old-world linen’. Price? £2,000 / US$1,998 / € 2,198 (including stands).

The Model Five’s tweeter is a 1″ aluminum dome. Midrange and bass come courtesy of 4” and 10” pulp-paper cones respectively. None are exotic materials but all capable of good sound. Indeed some laud paper for its more natural take on the human voice. Sensitivity is 87.5dB. Nominal impedance is 6 Ohms, dipping to 3.5 Ohms at 140Hz; not too difficult an amplifier load.

The speaker is an Acoustic Suspension Design (aka sealed-box), a technique invented by Edgar Villchur in 1954. He founded Acoustic Research along with a certain…Henry Kloss. No surprise then that the approach made its way into the KLH toolbox. 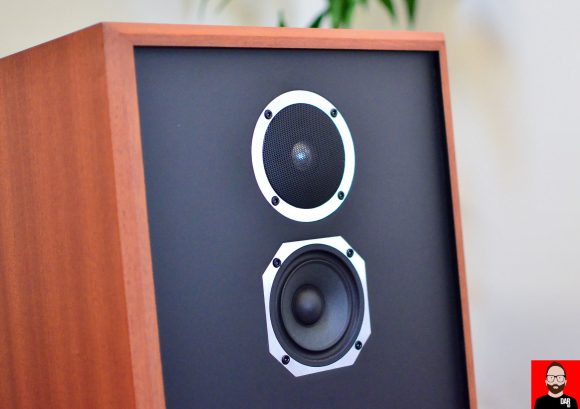 Sealed-box designs tend to give tighter bass at the expense of ultimate low-end reach. No one told the Model Five though, which reaches a very respectable -3dB at 42Hz according to KLH. In practice there appears to be a lot happening below that too, implying a slow roll-off. A conclusion I reached before remembering sealed designs typically roll-off more gradually at 12dB/octave instead of the 24dB/octave we get from ported loudspeakers. That KLH rate The Model Five -10dB at 32Hz will come as no surprise.

Sealed boxes are also, generally speaking, easier to position as there’s no port interacting with the room. I started with the KLH two metres apart and 60cm out from the front wall. Moving them 20cm backward had no ill-effect though so there they stayed.

Finally, a single pair of terminals sit low on the back of the speaker, between which sits an Acoustic Balance control to help better match the loudspeaker’s output to the room’s liveliness. Hi is flat, Mid and Lo attenuate frequencies above 400 Hz by 1.5dB and 3dB respectively. I gravitated to Mid as it seemed to best match my listening room’s sonic characteristics. 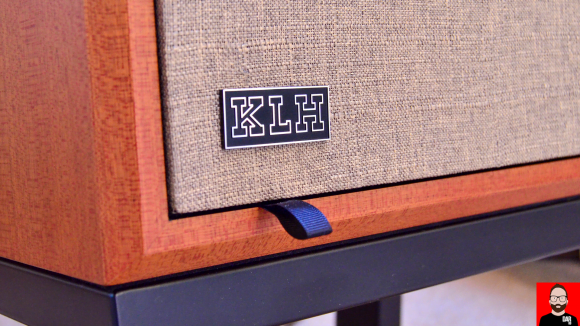 Looks & build
The Model Five couldn’t look more seventies if they wore flared trousers. Those bevelled front-edges, in particular, shout ‘old-fashioned’. The looks really grew on me but you can be your own judge.

Build quality appears ‘heirloom’ good; the cabinets are certainly well veneered in African Mahogany. Coming soon is an English Walnut / stonewash linen option. Touch the speaker when music is playing and vibrations are felt – as we’d expect. They are less evident halfway up the side of the cabinet which suggests internal bracing.

The stands are sturdier than they look but lack any provision for spikes or similar. That meant my usual IsoAcoustic Gaia III feet were a non-starter. The loudspeakers themselves cock a snoot at audiophile jewelry – fancy connectors, special wiring etc. An attitude I quietly admire. Time to see if they deliver… 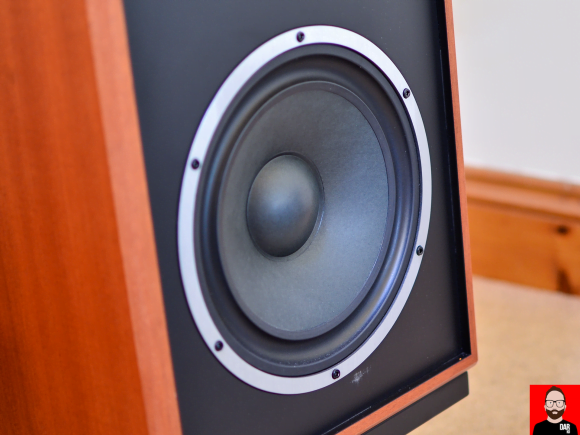 That’s an expensive supporting cast – would a more modest system work? I investigated this with a Windows laptop running Audirvana (V3.5.46) going USB into an iFi ZEN DAC V2 (£160) and Marantz PM6006 amplifier (£350). That totals a mere 10% of the big-rig cost. 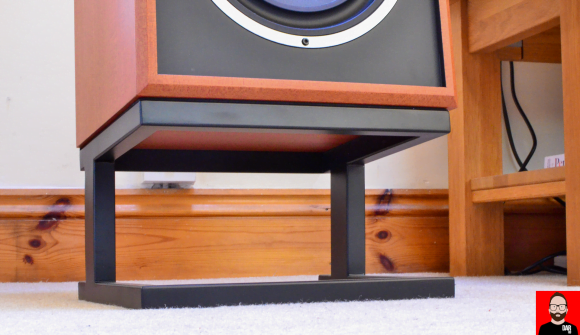 Listening w/ Cambridge & Gold Note
From the off, things sound good. At first surprisingly similar to the Graham LS6 – plenty of detail, performers portrayed in a large acoustic space. The KLH sounds fuller with more body, which I like.

The Model Five’s dynamics are strong, easily besting the Graham LS6. Albright’s “Sooki Sooki” from 30 is wonderful – showing meatier bass from the KLH than the LS6. The Five paint a bigger soundstage too. Derrick Hodge’s Colour of Noize sounds bolder to the point of brassy.

Perhaps these qualities are rooted in the Model Five going lower than the LS6 – on paper and in the listening room. The Model Five sound tight whilst maintaining commendable depth. The Model Five’s below-waist performance and their handling of big dynamic swings are two key calling cards.

That said, refinement isn’t central to the Model Five’s persona. The LS6 does ethereal better, Stephen Stubbs’ baroque lute hanging in the air for longer. But, without hearing the two together, listeners will admire the KLH’s ability to paint a big soundstage and place performers accurately within it. Tonally, it’s a little cooler than the LS6; no-nonsense rather than beautified. 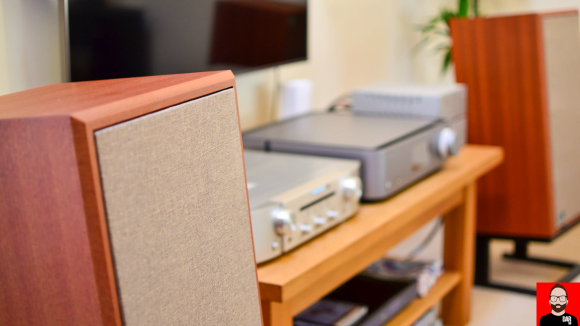 Careful now
There’s one area to watch out for – when provoked the Model Five’s sound can harden a little. Poor or bright recordings are not its friend. They are also more finicky about upstream electronics than any loudspeaker I’ve tried to date. Get the partnering system wrong and the hardness intrudes. Match well and it only makes itself known occasionally.

Take the Line Magnetic 845IA for example; a wonderful amplifier in its own right. Paired with the KLH the two positively bicker, their strengths lost beneath a sheen of glassy treble. Some things aren’t meant to be.

Back to the Gold Note monos. I switch them to low damping mode, which trades some control for a gentler more mellifluous sound. Used this way the Model Five’s top end is a tad sweeter, less prone to excess. It’s a more homogeneous sound, a little detail is lost, but to these ears it’s preferable. The late audition of a Moon 280D streaming DAC (review coming) also moved the KLH’s refinement up a notch. 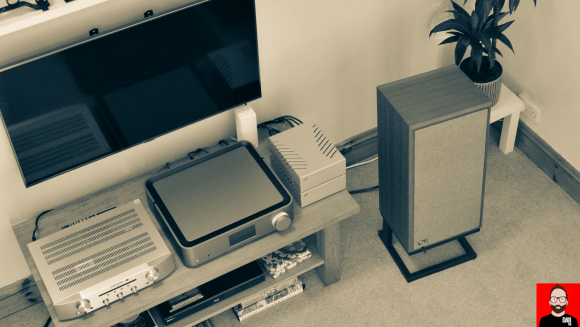 With Marantz, iFi & Audirvana
When I introduced the lower-cost electronics, my hesitation hung over the Marantz amplifier. Would its lightness of touch prove a good match to the KLH?

Turns out, I shouldn’t have doubted it for a moment. The components gel wonderfully with no hint of top-end hardness (I looked for it). The sound is agile, its overall tonal balance shifted upwards. Not a surprise — that’s how the Marantz sounds. We get clarity at the expense of some tonal density. “Sooki Sooki” sounds more fleet of foot than before but its bass reach carries less weight.

Dynamics are good but more restrained compared to the big rig. The Palpability of performers is top-notch even if musicians are slightly less well defined in the acoustic space. Midrange information is also well communicated. Female vocals sound especially gorgeous. Cassandra Wilson’s version of “Time After Time” is distracting me as I write this.

To be clear, David hasn’t vanquished Goliath. The big guns – Edge NQ, PA-10 monoblocks – still elevate the KLH’s performance to a different level. But for a quarter of the price (including the loudspeakers), the lesser Audirvana / PM6006 / ZEN DAC system doesn’t just work, it’s a valid way to spend £3k when building out a KLH-based system. 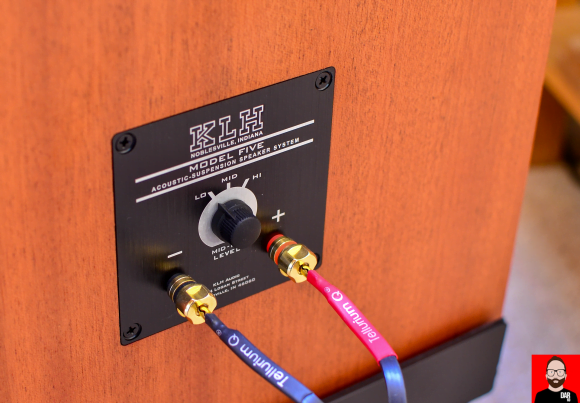 Summary
Forget lazy notions of the Model Five being a knock-off JBL. The Model Five carve their own path. Overall, they perform on par with the more expensive Graham LS6, albeit via a different approach, trading in some refinement for a more direct, in-your-face sound. Think: Levi’s 501 instead of designer jeans.

The KLH are good rock speakers. Orchestral lovers will also find much to enjoy here. Just be careful with those electronics! Get it right and you’ll be rewarded with a BIG sound that’s dynamic and detailed. The sort of sound that impresses initially but over time proves it’s far more than skin deep. The Model Five are unpretentious in audiophile terms. Just don’t underestimate their long-term potential. 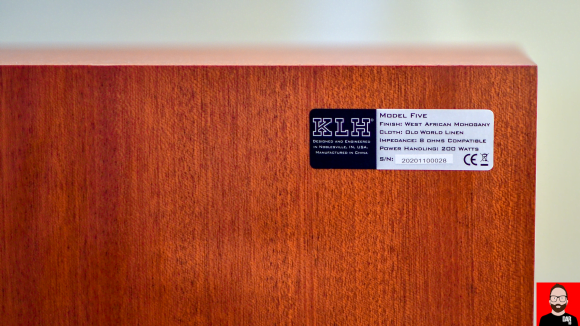 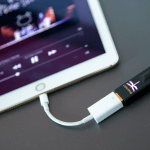 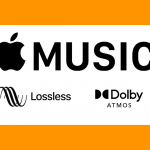