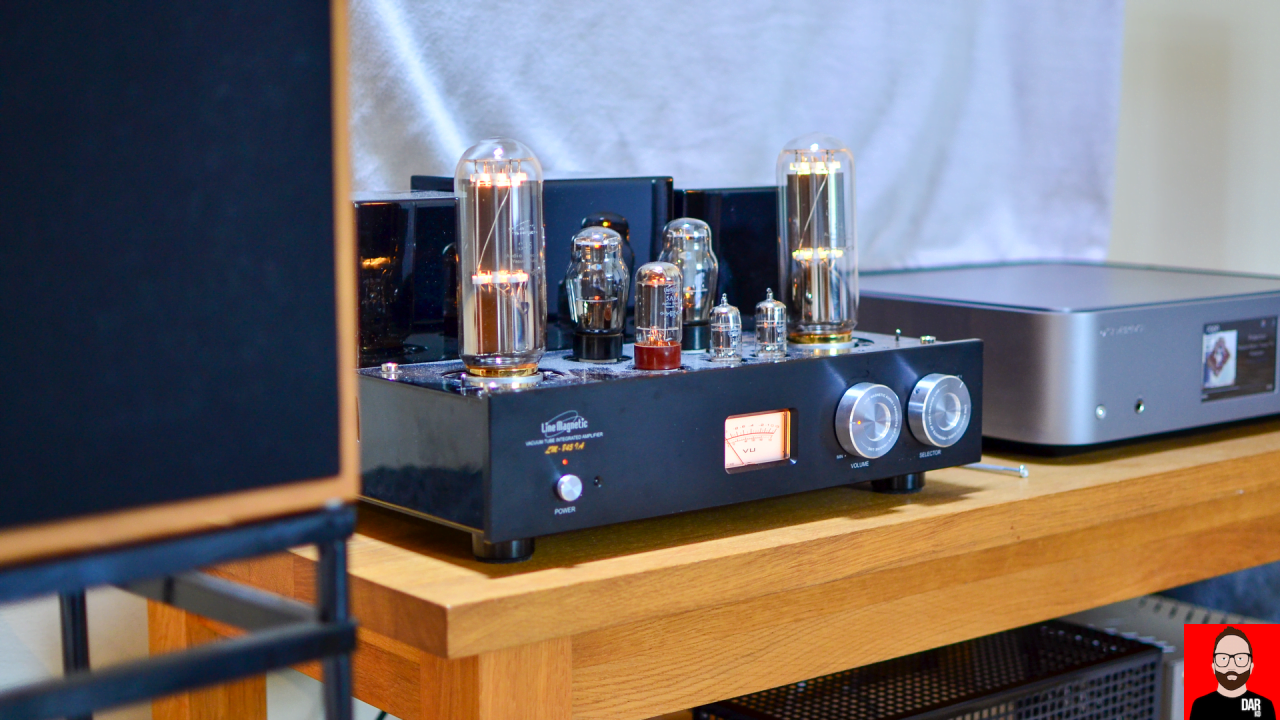 The Line Magnetic 845iA (£3999/US$4895/€3999) is an integrated amplifier with three line-level RCA inputs and a low-ish power output. Even to seasoned audiophiles, 22wpc into 8 Ohms won’t sound like much. That’s because this Chinese-designed (and made) amplifier is a valve-based design where glowing glass bottles are deployed in its pre-amplifier and power amplifier stages. Also known as vacuum tubes, the valves ride on a single-ended Class A circuit. Digital capability? Nope. Phono stage? Nope. Headphone output? Nope. Heck, the 845iA doesn’t even have balanced inputs.

Nothing about the 845iA nods to the modern world. Weighing in at 35kg, it’s a million miles from modern-day Class D designs. Only a pre-amplifier input – that recasts the 845iA as a power amplifier – differentiates it in spirit from amplifiers coming to market sixty years ago. That and a small metal remote for volume & mute.

Front the Line Magnetic with a streaming DAC (as I did) and you have a neat two-box system. With an amplifier that’s arguably more future-proof than many ‘modern’ counterparts, where built-in digital-to-analogue converters can sometimes see the unstinting march of digital quickly leave them behind.

Back to those valves. Is their 22wpc enough to drive ‘normal’ loudspeakers properly? And how does the Line Magnetic sound? Does it stick to the stereotypical view of valves – buttery bass underpinning a sumptuous midrange and silky top end – or does it tread its own path? 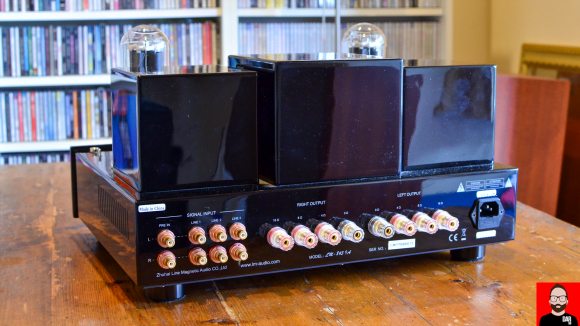 Features & operation
This Line Magnetic integrated uses seven valves in total, each one (or pair) having different characteristics suited to a particular job. The single 5AR4 is a two-element valve without a grid that’s used for rectification, turning AC power into DC. In addition, the 845iA has 2 x 12AX7 valves in its input stage and 2 x 6P3 valves as drivers. Plus the two large 845 output tubes that give the amplifier its name.

The 845iA’s RCA inputs are on the rear (not always the case with valve amps). Next to them sits a single set of loudspeaker terminals with options for 4, 8 or 16 Ohm connections. We should use the ones closest to the nominal impedance of our loudspeakers.

The front panel is simple; two dials on the right – one for volume and one for input selection – plus an on/off switch to the left and a small ‘bias current’ meter in the centre. Two switches and four small slots on top allow us to adjust the bias current and eradicate mechanical hum from the three large transformers.

Some valve amplifiers offer auto biasing. Not the Line Magnetic, but adjusting the bias isn’t too onerous. Flick the switch for the chosen output valve, check the meter, adjust with a screwdriver if necessary. You’re aiming for 70mA. Repeat for the other valves. Finally, tweak the hum-balance slots if you can hear any buzzing (I never did). It sounds complicated but isn’t. Just watch your knuckles, those 845 valves run hot.

Everyday operation is methodical. Turn the volume to zero, switch the amplifier on, wait 30 seconds whilst it soft-starts. If you turn it off, wait two minutes before switching it on again. This better protects the valves. And don’t turn any valve amplifier on without speakers connected – you risk damaging the transformer and/or output valves. 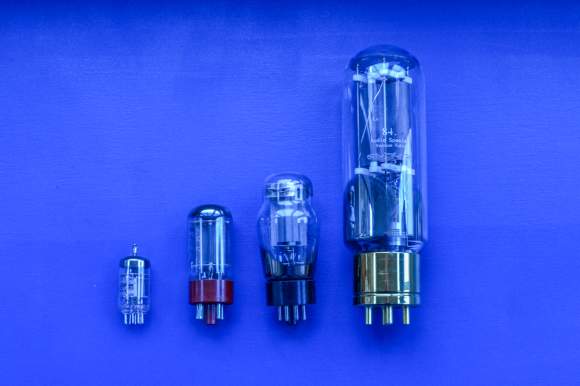 Looks & build quality
The Line Magnetic wears its underpants on the outside; the valves are all prominently displayed in front of the output transformers (hidden away in the towers behind). Everything appears well screwed together. The finish is gloss black, lending the amp a dark and brooding air and, for some, the antithesis of chic. Using the supplied valve cage – designed to keep inquisitive fingers away from not inconsiderable heat – dampens the vintage vibe a little. User discretion is advised.

Personally, I love the Line Magnetic’s retro look. Those 845 valves are things of beauty; large, complex and mysterious. With the lounge lights low and the 845iA’s cage removed, there’s a real romance to proceedings.

Alas, after ten days of use, the 845iA gently shut itself down without warning. Its main fuse had blown, so back to (sole) UK dealer VAL HiFi it went. A faulty valve-base and associated diode were replaced. The damage had probably occurred in transit; it transpires that this sample had already done some serious mileage, visiting several other reviewers before arriving at my door. Once repaired, the Line Magnetic performed without issue. 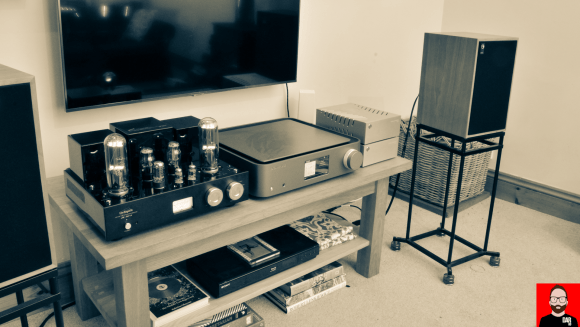 Review equipment
The Graham LS6 standmount speakers (£2300, review here) have a manufacturer-rated 87dB sensitivity. That’s average for a standmount of their size and a more than fair test partner for the 845iA. KLH’s The Fives – up for review next – also got a brief run. At 87.5dB, their sensitivity is similar.

I also tried – briefly – my regular Pro-ject S2 Stream Ultra / Mytek Liberty / SBooster front end with the 845iA. However, a slight audible harshness put paid to further listening. That was interesting. In every other system, this combination had shown itself to be on a par with the Edge NQ. The 845iA exposed a more pronounced performance delta that favoured the Cambridge unit. 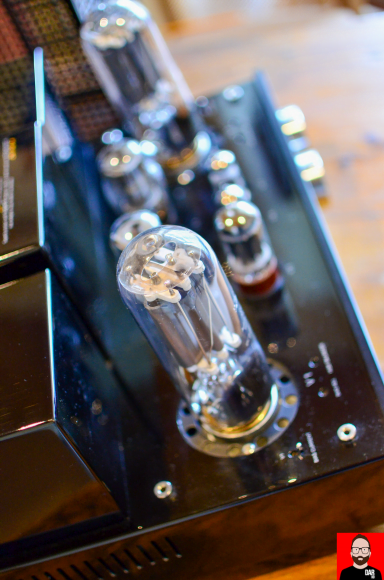 Sound quality
I played some gentle classical guitar to (literally) warm up the 845iA and I noted a very pleasant sound, even when I wasn’t focusing all that much. Then onto “Sooki Sooki” from Gerald Albright’s 30 album for a blast of funk. The sheer force took me by surprise. The 845iA had announced itself, sounding much stronger than any 22wpc solid-state design. Want dynamic slam? The Line Magnetic gives us it in spades. At the same time, out the window went any (clichéd) notion of bass looseness.

Treble was also more direct than I had expected. Sweet n sugary it isn’t. More than once was I reminded of the ‘live music’ vibe felt during time spent with the Klipsch Heresy III and Forte III. However, the 845iA’s treble comes on as beautifully judged. With Britten’s 1st String Quartet, it positively shimmers. That’s especially noticeable once the Endellion String Quartet reaches the very highest registers. This is where most other amplifiers I know tip over into screeching.

The detail on show is a cut above, coaxing even more information from David Gilmour’s “Great Gig in the Sky” (from Live in Pompeii) than previously heard by this commentator. Normally, we hear Bryan Chambers join the song halfway through. In the Line Magnetic rendition, we realise he’s present from the beginning, subtly underpinning the vocal acrobatics of Lucita Jules and Louise Marshall before taking centre stage himself. Just glorious.

There’s more. The 845iA comes on as properly propulsive on The Sound of Afrotronica by Kaidi & NK-OK and it makes The Danish String Quartet’s Prism 1 sound almost ‘achingly’ poised. “They’re Calling Me Home” from Rhiannon Giddens and Francesco Turissi also captures the raw directness of her singing. It’s fair to say that it pushes all the right buttons for me. 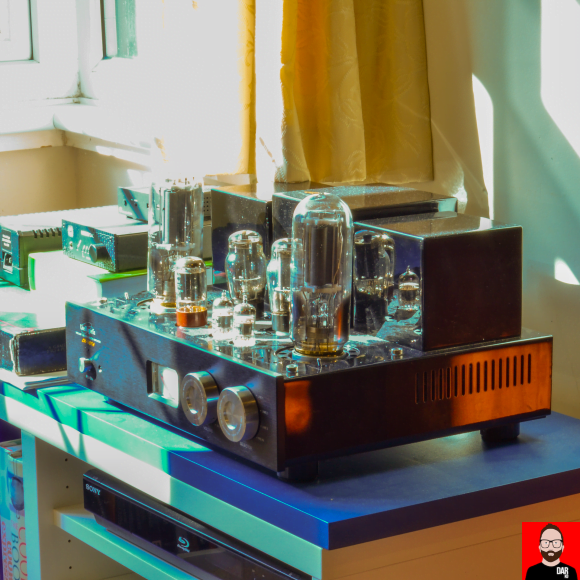 Comparisons
I hooked Cambridge’s Edge NQ into the 845iA pre-amplifier inputs to bypass the Line Magnetic’s own pre-amplifier stage. The two sound very similar, but the Edge can’t quite match the realism or the directness of the Line Magnetic. The sound is slightly paler, player outlines a little more amorphous.
Switching back to the 845iA removes a fine mist that, hearing the Cambridge alone, you’d likely not notice. That said, other factors might push you closer to the Edge NQ e.g. the convenience of in-Roon volume control. For overall sound quality, the 845iA gets the nod. Just.

Enter the Gold Note PA-10 monoblocks to go up against the 845iA’s power amplifier. They’re both operating at the same high level but there’s clear water between them on presentation. The 845iA has a lighter touch, the Gold Notes favour a darker palette. Whisky drinkers will find the difference analogous to Laphroaig (845iA) versus Bowmore (Gold Note). In the coffee shop, we’d be talking lighter vs. darker roasts.

The Gold Note pair also sound more solid in the bass, mining the Grahams deeper than the Line Magnetic. Maybe 300wpc does count for something? Or maybe it’s the Italian’s solid-state nature. When it comes to dynamics though, the 845iA eats the 2 x PA-10. It also sounds more filigreed, more refined, with the Gold Note two-fer coming up shorter on a recording’s air and room ambience.

With pros and cons for each, the choice might also fall to accompanying kit. With the LS6, I lean toward the Line Magnetic but I could (and do) live happily with the Gold Note. With KLH The Fives, the Gold Note comfortably won the day, the 845iA sounding inexplicably harsh when paired with this newly revived model. It’s a finding that reinforces the importance of properly matching amplifier to loudspeaker. 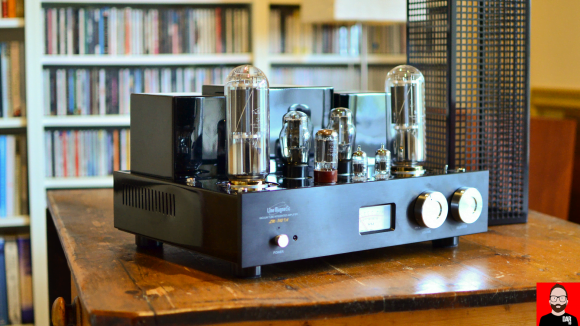 Wrap
The Line Magnetic 845iA is the sort of product you get out of bed for in the morning. Paired with medium to high sensitivity speakers, it sounds robust and resolving, its extra resolution delivered with a most inviting lightness of touch. Here we have our cake and we can eat it too. 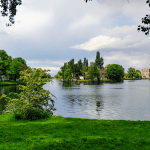 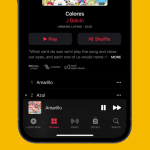