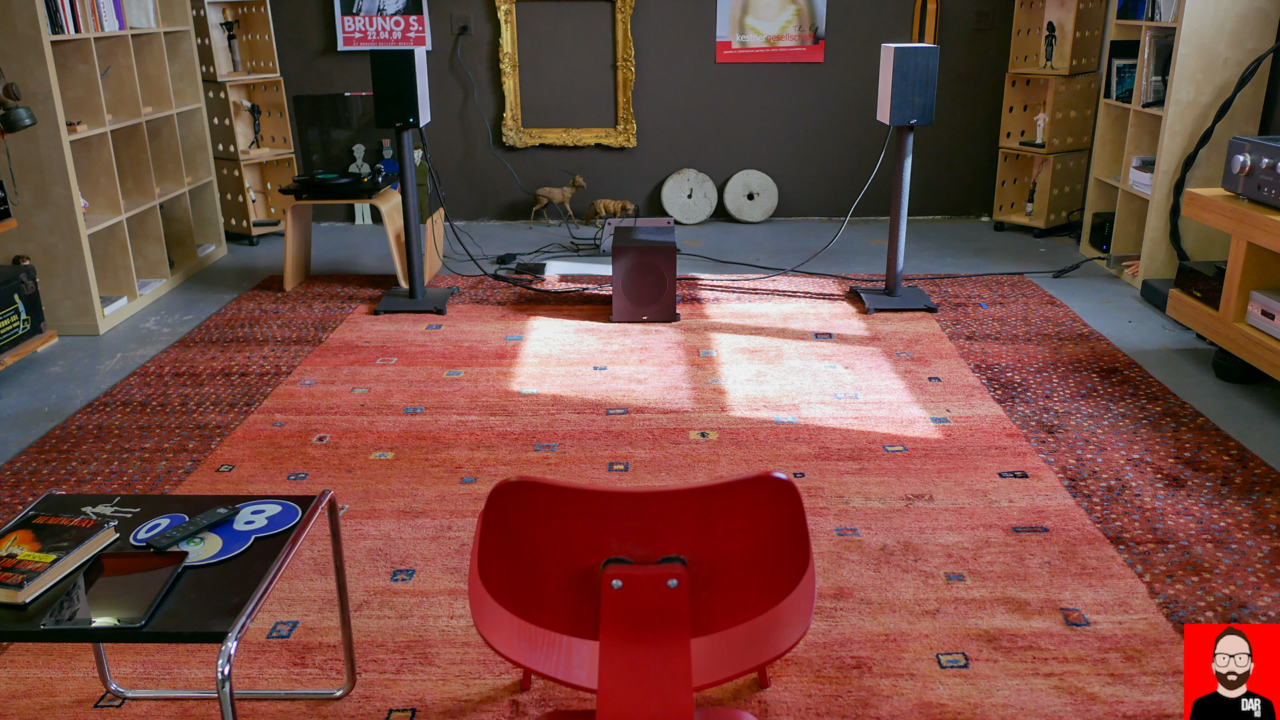 My affair with powered loudspeakers dates back to 2012 when I reviewed – and decided to make an honest speaker out of – the ADAM A3X Active Studio Monitors. They’ve lived ever since on my desktop bringing me daily musical joy. So you could say I’m a relatively soft sell when it comes to loudspeakers that put the amplification inside the cabinet(s).

The PSB Alpha AM5 ($599/pair) is one such powered loudspeaker. Its primary speaker houses a Hypex-based 50 Watt Class D stereo amplifier and offers the following source connections: 3.5mm analog, MM Phono (twin RCA), micro-USB and Toslink as well as a Qualcomm aptX Bluetooth receiver. This primary speaker serves as the left channel and connects to the right speaker via loudspeaker binding posts and speaker cable. There’s also a subwoofer output (RCA) which when in use, triggers low- and high-pass filters inside the AM5 to relieve them of deep bass duty.

The Alpha AM5’s drivers are custom-designed by PSB and feature a ¾” aluminum ferrofluid-cooled tweeter and 5 ¼” midbass woofer and the Alpha AM5’s on-axis frequency response is rated by the manufacturer at 55Hz-20Khz (±3dB). The cabinets measure a petite 6 3/4” x 11 2/5” x 9 1/2” and are constructed from MDF and wrapped in vinyl. They come in a choice of matte black or white and a pair of removable acoustically-transparent black magnetic grilles finish off their looks. 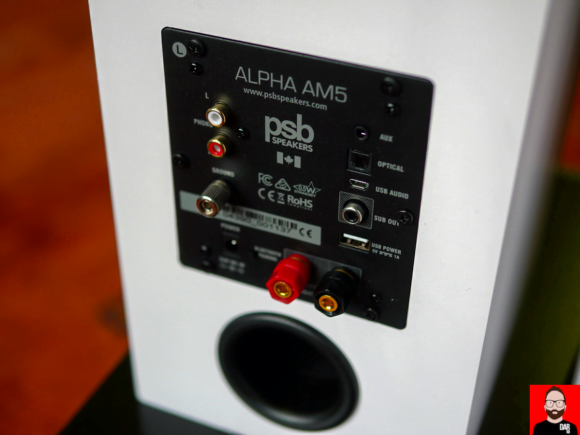 The font of the primary speaker includes a knob on its lower right for adjusting volume and source selection as well as an LED that changes color to indicate the selected source and sound mode. The included black plastic remote offers the usual functions of input selection, volume control, bass and treble adjustment, ‘Sub’ (engage or disengage a subwoofer), and the rather unusual option of changing sound ‘Modes’. Unlike most powered speakers, the AM5 have a DSP circuit before the amplifier, which means incoming analog or phono signals get converted to digital before being amplified.

For the why we see that PSB has teamed up with Israel’s Waves Audio, purveyors of audio plugins and signal processors for pro and consumer audio, to add sound mode options to the AM5. Modes include Stereo (normal), Widesound (Expanded Soundstage), Dialog (Enhanced Dialogue Clarity), and Widesound Plus (Expanded Soundstage with Enhanced Dialogue Clarity). Clearly, PSB has chosen these modes to accommodate people who will use the AM5 in conjunction with moving pictures.

If you read PSB’s website and associated literature on the AM5, you might think that pretty much covers the specifics. But the AM5’s have another trick up their DSP – MaxxBass, another Waves product. As I mentioned in my review of the DALI Oberon 1C, the AM5s sounded “heftier” than the DALI, even though, on paper, the DALI go lower in terms of frequency response. It turns out that I was hearing Waves’ MaxxBass – DSP that uses psycho-acoustics to calculate the precise harmonics that are related to the fundamental tones of sound. When these harmonics are combined, it creates the illusion of lower, deeper frequencies. Waves claims this effect extends perceived bass response by up to 1.5 octaves. It’s interesting to note that we’re not talking about adding measurable bass extension, just the perception thereof.

As you can hear if you watch that video, MaxxBass works. It also breathes new life into the cliche of being surprised by a small speaker’s bass response: the Alpha AM5’s go lower, perceptually, than you’d expect.

I paired the PSBs with the Roon Ready Bluesound Node 2i and Primare NP5 as streamers via Toslink, a Raspberry Pi 4 as Roon Ready Streamer connecting to the AM5 via USB, while a Rega P3 mounted with a Nagaoka MP-110 MM Cartridge fed the AM5’s MM phono input.

Let’s begin with a technical issue. Using a Raspberry Pi 4 running Ropieee as a USB streamer, Roon automatically converted 24-bit data to 16-bit data before sending it on to the AM5 even though the AM5’s specifications state that the USB input can handle 24-bit/48kHz data.   While PSB claims a 24-bit/192kHz limit for Toslink, I was only able to play 16-bit data without issue. When attempting to playback hi-res, 24-bit music via Toslink, the AM5 went silent and the status LED on the left AM5 would go into error mode, blinking red. Limiting data to 16-bit from the Toslink streamers to the AM5 using Roon’s Device Setup options solved the problem.   As such, I was only able to review the AM5 streaming 16-bit data. Despite repeated requests for comment on this issue, my contact at PSB remained schtum.

When I first sat down with the PSB Alpha AM5 for some dedicated listening time, I was coming off the heels of my review of Dali Oberon 1C. As I shared in that review, the PSB sounded, by comparison, heavier with more emphasis placed on music’s lower end. The PSB sounded beefy to the DALI’s vegan. Over time, and a change from the Bluesound Node 2i to the Primare NP5 Prisma streamer, these initial impressions shifted to a more balanced view. Thus situated, with the NP5 passing off the streaming bits to the AM5’s Toslink input, the aural focus became more agreeable to my ears, losing that lower-end emphasis and what I’d call the somewhat darker overall sound I heard when using the Node 2i, to having a more neutral and brighter stance. While I wouldn’t call this difference dramatic, like when you turn the lights on in a previously pitch-black room, I would call it significant. 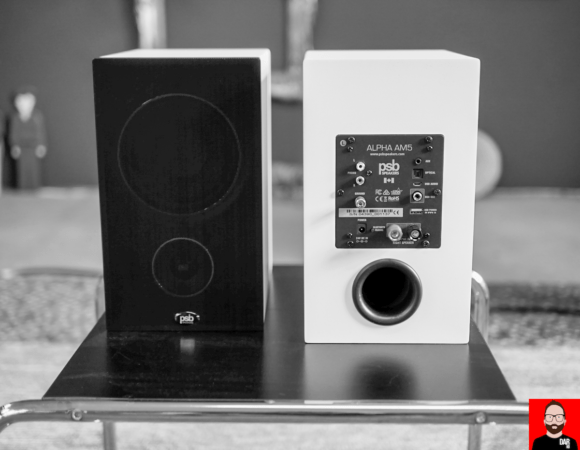 Young Jesus’ Welcome To Conceptual Beach, released on Saddle Creek in August 2020, is an adventurous record in terms of the musical styles it explores and I find the trip well worth taking. Lush harmonies mix and meet auto-tuned squelch and space-age jazz to form an album with multiple personalities. Guitar, keys, bass, drums, and vocals are joined by sax and flute and electronic effects making Conceptual Beach a nice tool for testing the breadth of a hifi’s ability to present various voices, sounds, instruments, and moods and the PSB Alpha AM5s passed with size-defying colors. John Rossiter’s vocal range and emotive styles are a thing to behold and the AM5s put these qualities out on very fine display in-barn. The band sound muscular and tight, with a nice physical presence, albeit a few shades lighter than what the larger Dali Oberon 3 offer (review here).

Shame’s Drunk Tank Pink is pretty much classic post-punk but this record pushed the sound limits of their instruments, vocals included. This is also hard-driving music and the standmount Alpha AM5s displayed plenty of gusto. Unlike the Dali Oberon 1C, I felt more than comfortable with the barn’s red chair back in its normal listening position: about 9 feet back from the speakers. While I’ve heard snappier and more dynamic speakers, the PSB smooth things over with their fuller-than-expected voicing.

Armament is cellist Mariel Roberts playing unedited improvised pieces for cello and pedals. Elementally minimal, this record moved my listening focus to subtle shifts in tone, nuance, and texture. Here, the PSB Alpha AM5 show their shortcomings when compared to bigger and more expensive speakers. The total range of voices and flavors from Roberts’ effects-rich cello are foreshortened, sounding more homogenized when compared to the Dali Oberon 3 being driven by a champ of an integrated amp, the Hegel H95. If we move into the land of absurd price-be-damned comparisons, the DeVore O/93s paired with the Ayre EX-8 Integrated Hub add entire dimensions of sonic wonder to this record, unfolding unheard nuance, tone, texture, and subtlety that the PSB simply cannot muster. I offer this comparison as a reminder that sometimes more is more. 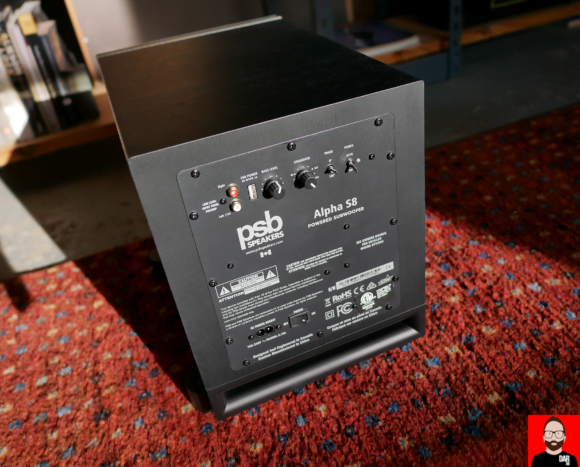 PSB also sent me their Alpha 8 subwoofer ($499) that offers a specialized long-throw 8” driver in a bass-reflex enclosure, powered by 150 continuous Watts of Class D power. According to PSB, the Alpha 8 reaches down to 35Hz. The Alpha 8’s rear panel houses volume and crossover controls (Continuously variable from 50Hz to 150Hz or LFE), phase switching, a low-Level input and RCA inputs (Right, Left/LFE). I connected the Alpha AM5’s subwoofer output to the Alpha 8’s LFE input with an interconnect cable and set the crossover control to LFE (Low-Frequency Effect).

In my experience, we have a tendency to overdo subwoofer volume, especially when the sub is fresh out of the box. We want to hear its voice, loud, deep, and clear, subtlety be damned. The thing about obvious is that it quickly becomes old. I ended up setting the Alpha 8’s volume control to 5, which provided the best balance between not enough and too much.

With the Alpha 8 in the system, Mariel Roberts’ cello took on greater body and a harmonically richer and more textured voice. I also perceived a greater sense of resolution, as if the Alpha AM5’s, now free to focus on their strengths, delivered more treble extension and bite. As you’d expect, rowdier music from Shame and Young Jesus gained more weight, punch, and power. The way I heard it, adding the PSB Alpha 8 was all pluses with no minuses. The barn gives loudspeakers a lot of internal volume to work with, and the full PSB Alpha AM5/Alpha 8 system did a much better job of energizing the space than did the AM5 running solo. A kinda obvious conclusion. To put a finer point on the Alpha 8, I wouldn’t go so far as to suggest that AM5 owners need it, especially for more modestly-sized rooms, but for full-bodied bass lovers and home theater special effects boomers, you’ll certainly want it. It’s worth noting that PSB also offers the Alpha S10 Subwoofer ($549/each) if you thirst for even more boom in your room. 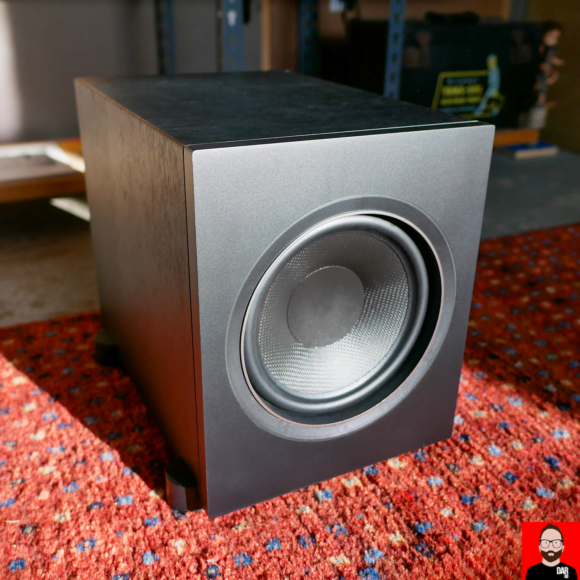 With the Rega P3/Nagaoka MP-110 MM Cartridge playing music through the AM5’s phono input, I was reminded of why I enjoy listening to records. In a nutshell, it’s the experience and the sound. Spinning Sonny Rollins Freedom Suite from 1958, a favorite record and one I’ve listened to more times than I care to admit, I was immediately drawn into this wonderful, simple, meditative music. Freedom Suite features Sonny Rollins on tenor saxophone, Oscar Pettiford on bass, and Max Roach on drums – a supergroup by any standard – and the PSB Aplha AM5 running sans sub did a fine job of presenting the rhythmic drive, energy, and voice of the trio. The AM5’s phono stage was designed by NAD and it is more than capable of satisfying the vinyl-lover in all of us.

I tend to shy away from digital effects when it comes to listening to music. While I took the AM5’s various DSP sound modes for a test drive, I very quickly returned to running the AM5 without a digitally enhanced wider soundstage or enhanced dialog. Of course, these modes are intended for home theater use so it’s no wonder I found them unwelcome additions. Think sugar on fruit.

The PSB Alpha AM5 powered bookshelf speakers are a winner of a product for those looking for a relatively simple solution to music playback in the home. Streaming music lovers just need to add their digital source of choice while vinyl collectors can rejoice in the convenience of an in-built phono input – just add a turntable. On the user-friendly front, the AM5’s Bluetooth option invites anyone with a phone and music to join the party with a few quick taps. To top this appealing package off, the AM5’s psychoacoustically-enhanced bass will excite many a listener. 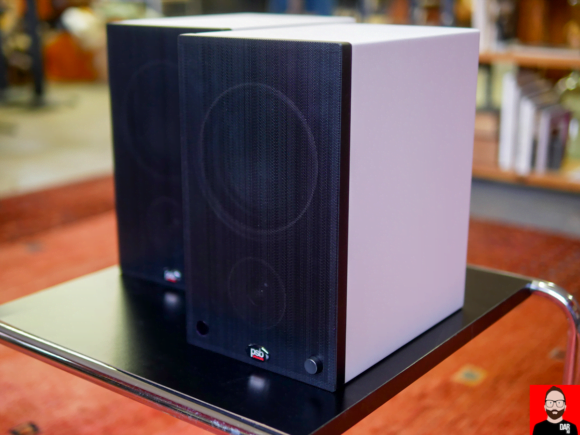 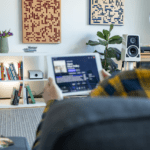 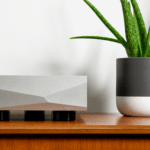