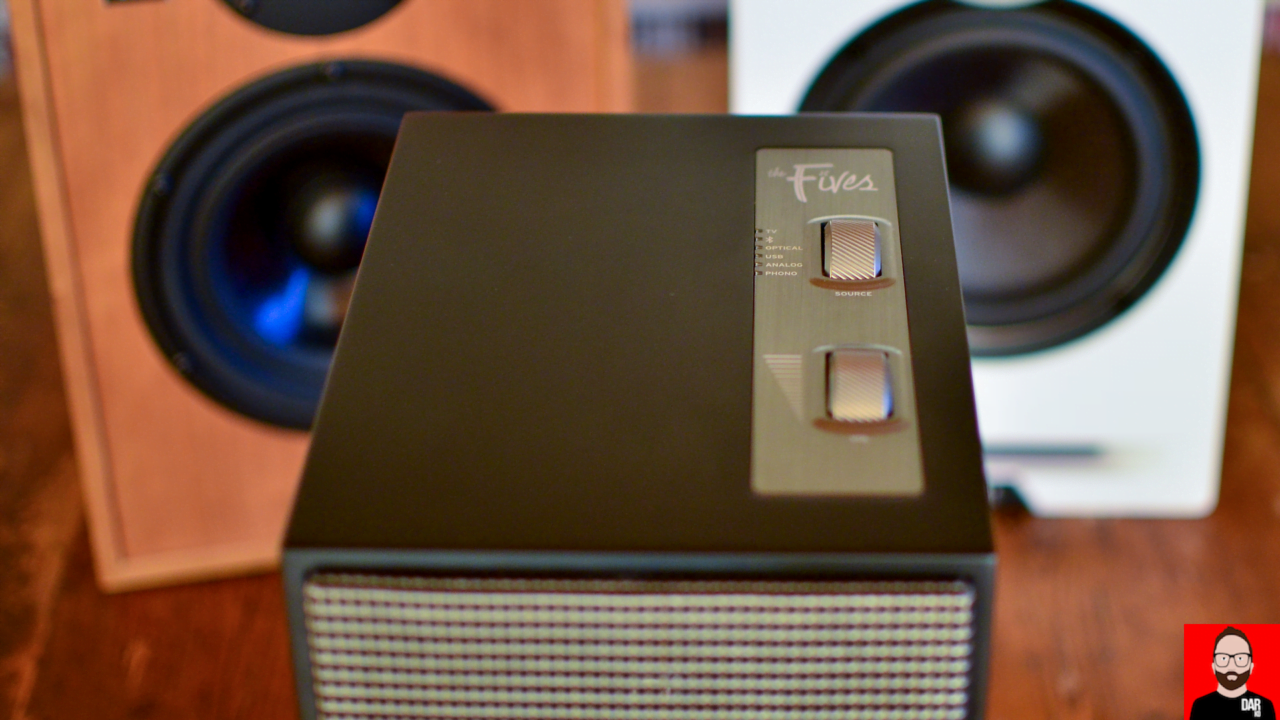 Klipsch’s The Fives (€899/£839/US$799 per pair) are powered loudspeakers marketed primarily as a lifestyle product but with some crossover potential for the audiophile space. Some may sniff at that but I’m more broad-church; if there’s demand for products with audiophile pedigree that reach beyond the hifi ghetto then why not? Many high-end companies – Linn (Series 3), Naim (Mu-So) etc – appear to agree.

Besides, The Fives are from Klipsch, the company whose £4k Forte III floored me with its maverick sound. Might some of that magic have trickled down to The Fives? I was keen to find out; and also to see how The Fives compare to similarly priced separates.

What are they?
The Fives comprise two speakers, one passive, the other housing the electronics (amplifiers, crossovers and DAC). The primary loudspeaker, therefore, needs mains power, the passive doesn’t. A supplied 4m cable passes signal between them, a screw-in connector secures the cable well at each end. Different cables aren’t an option. A switch on the primary loudspeaker allows us to toggle its role between left or right channel duties (according to room arrangement and mains socket proximity).

The Fives are a 2-ways design, a 4.5” woofer supported by a 1” titanium dome tweeter, the latter deploying a Tractrix horn (a Klipsch trait). There’s also a Tractrix port on the rear. Tractrix describes the specific shape of the horn, based on mathematical modelling. 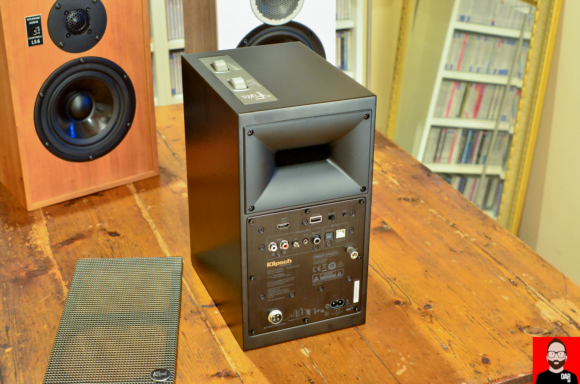 The ins and outs
Lifestyle loudspeakers often limit us to Bluetooth and a 3.5mm input. Not The Fives. Bluetooth is present – top-notch aptX HD to boot – but there are also USB-B and optical SPDIF inputs. Plus two-way HDMI-ARC for suitably equipped TVs. Non-ARC devices don’t work, I tried. No sweat, just use the optical connection. The (unspecified) DAC caps out at 24bit/192kHz on HDMI & USB, 24bit/96kHz on optical. Fine for these ears (and the Klipsch’s price point).

The Fives have two analogue inputs: a 3.5mm socket and RCA phono connectors that can be switched between line and MM phono. Say hello, turntables. Lastly, there’s a subwoofer output for 2.1 system configuration.

Controls – and the all-important bass EQ
Controls are simple: two rotary dials on top of the primary loudspeaker for volume and source selection. Eight LEDs next to them to show input and volume. My only gripe is aesthetic: the control dials are large, more Hagrid than Harry Potter.

The remote is small and neatly laid out, handling volume and input selection. It also allows us to tailor bass to one of three settings: Dynamic Bass, Flat or Bass Cut. For music listening, I implore you; only use the Bass Cut setting. It’s actually a misnomer, giving a flat bass response. The middle setting – confusingly called Flat – boosts bass from 200Hz downwards, peaking around +5dB at 50Hz. With Dynamic Bass it’s +7dB. The middle setting was fun with movies but that’s about it.

Upgrading The Fives’ firmware to install Bass Cut EQ was fiddly, but new production models should have it pre-installed; check with your dealer. A new Klipsch Connect app facilitates future updates. In reality, setting up The Fives was a breeze – (err) five mins from unboxing to playing music. 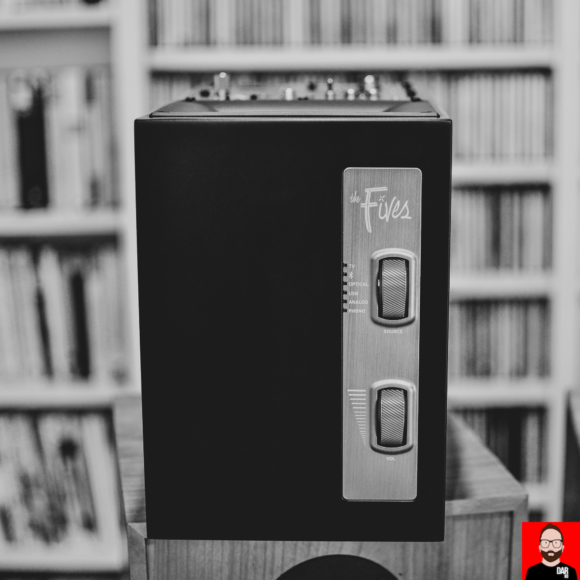 Build & looks
In the flesh, The Fives are smaller than they look in photographs, making them easier to accommodate on bookcases or shelves. Or treat them to proper stands. I tried both.

My review pair was black with silver grills but walnut with grey grills is also available. Build quality is typical Klipsch – very nice without being overly luxurious. Design-wise, The Fives are quite traditional in their appearance. They’re no Linn Series 3 or iFi Aurora.

Review equipment & positioning
The main listening was conducted via an RPi4 running Ropieee (hello Roon) with an iFi 5V power supply (£100), playing into the Klipsch’s USB input. £930 all up.

An Audioquest Dragonfly Red (£170) between RPi and loudspeakers provided an analogue alternative. Additional listening included a Samsung TV (Netflix app, iPlayer etc) and a Sony BluRay player used as CD transport. I couldn’t test the phono input as I don’t have a turntable.

On heavy Target stands, The Fives were positioned 1.8m apart, 35cm from the rear wall, slightly toed in. IsoAcoustic Aperta stands were placed between loudspeaker and stand – a complete mess visually but sonically well worthwhile. 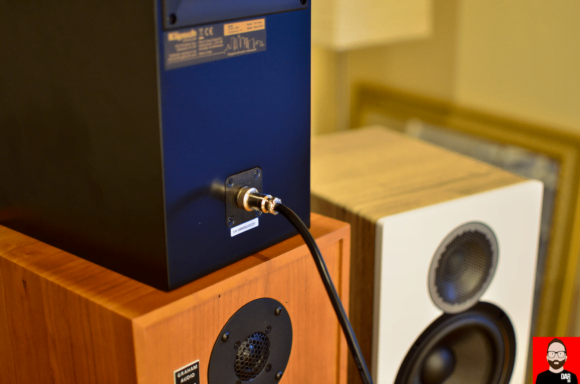 Sound
First up, I had The Fives on stands and fed via USB. The more I listened, the more I was impressed. In typical Klipsch (Heritage) style, it’s a direct sound. Forget mellifluous, rich or refined, The Fives are crisp, with a solid bass for their size. Performers appear close to you, it’s front row seats, not rear stall. There’s also ample detail, but one’s attention is drawn to certain aspects of the mix. And that varies by track. With Metallica’s “Enter Sandman” it’s drums (I was expecting guitar). Manuel Barrueco’s intimate fingering on “Koln Concert” is rendered subservient to the main melody. Dynamics are strong – no surprise as The Fives are horns (I knew it was coming but Methoden und Machinen’s cataclysmic opener was brilliant). The Klipsch also have a rhythmic quality that propels you along with the music.

All of this makes them great for rock or stirring classical. The Fives don’t do hang-in-the-air palpability quite the way some do – my Graham LS6s for example – but they’re nevertheless good across all genres. They just have their own voice – more Spendor D7.2 than Spendor Classic 1/2 (reviews here). 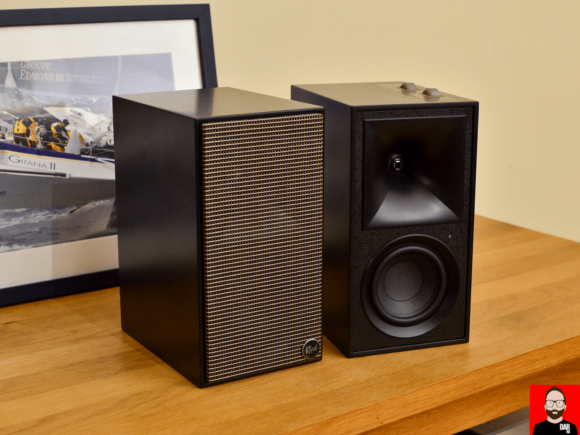 And the separates ace it. They’re more controlled, more refined, music escaping the loudspeakers better than The Fives. Tonally things are lighter – likely because of the Marantz’s lack of density. The separates system gives us more detail with player edges better delineated. Compared to the Klipsch, bass is conveyed (overall) with marginally more weight and acoustic bass sounds one or two degrees fatter. Overall, it’s a cleaner sound that more convincingly brings musicians to life.

But after a day or two with the separates system, cutting back to the Klipsch doesn’t bring with it disappointment. Ultimately their sound is less sophisticated than the ELAC/Marantz system but more exuberant. I remain impressed. 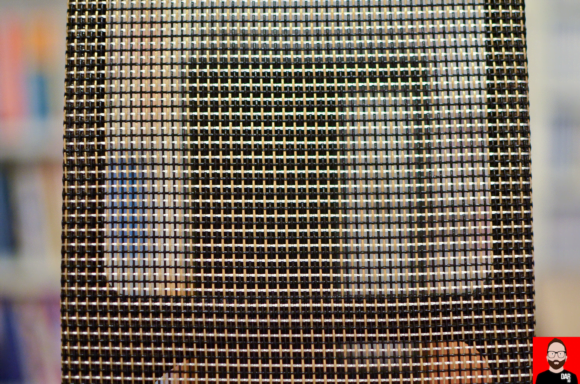 Other inputs
I switch to optical using the Blu-ray player as CD transport. After much listening I conclude it sounds essentially the same as USB.

TV through HDMI-ARC is a hoot, The Fives’ solid bass coming to the fore. The mayhem of Judge Dredd on Netflix is true carnage. Change the bass EQ to Flat (+5dB @ 50Hz remember) and things go over the top whilst remaining vaguely ‘credible’. Fun though. Surely the small drivers of a soundbar can’t compete?

Then onto analogue with the RPi/iFi/Dragonfly Red. Things step up, slightly sweeter, richer, fuller. It’s a less mechanical sound courtesy of the Dragonfly Red DAC, which trumps The Fives’ internal DAC in these areas. There is a slight trade-off though – clarity and dynamics are marginally softer. These ears prefer the extra refinement, some will crave the precision. Horses for courses; the differences aren’t huge, the consistency of The Fives’ sound is more noticeable. 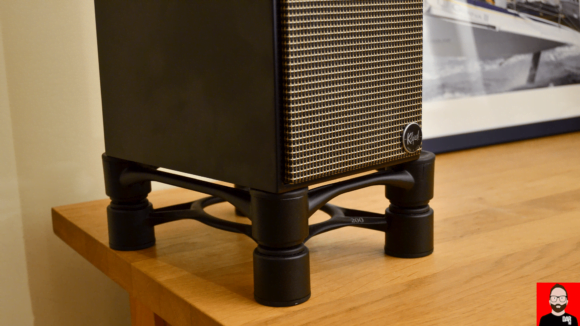 With apt-x HD from an LG V30 smartphone, it’s an enjoyable sound, the fundamentals in place. Soundstaging is good – broad and tall. Bass remains weighty, if a little slower. Dynamics and drive remain good. Detail steps down a little, the top end dulled slightly. Cutting back to USB confirms the superiority of a wired digital connection. There’s more detail, more air, the 3D nature of the acoustics now apparent. Bass is also tighter. The Fives’ make a good fist of Bluetooth though.

I then put The Fives on a coffee to see what more casual placement might do to their audible performance. It’s not ideal sonically but shelves, cupboards or tables are probably these loudspeakers’ natural habitat. The Aperta stands were retained, still looking incongruous (pucks might be better).

Sound quality holds up pretty well. The Fives end up being closer together (1.2m) so the soundstage becomes smaller, but it’s still very believable. It’s not as easy to place performers though, the sound more homogeneous. No surprise – we’re using rear-ported loudspeakers and close to a wall. Lower registers come on softer but remain impactful as Hurricane from Grace Jones shows. 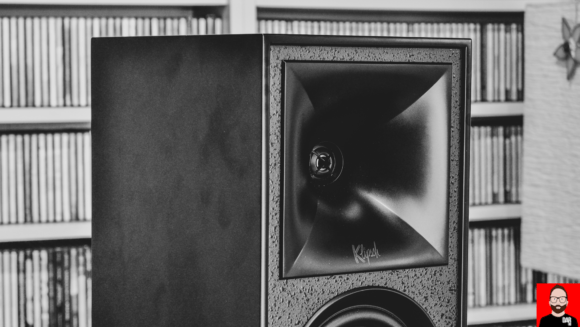 Conclusions
The Fives are an impressive all-in-one hi-fi system. Functionally they cover most bases. In lifestyle mode, they’re a slam dunk. I review wireless loudspeakers/systems for another publication and in 10 years nothing has approached the sound quality of The Fives – proper stereo s e p a r a t i o n from two good ‘uns wins the day.

But give these Klipsch a little audiophile love – proper stands etc – and they respond well, coming reasonably close to a good separates system but – crucially – WITHOUT the hassle of component matching and cabling. For those who prioritise simplicity, The Fives are well worth a listen. 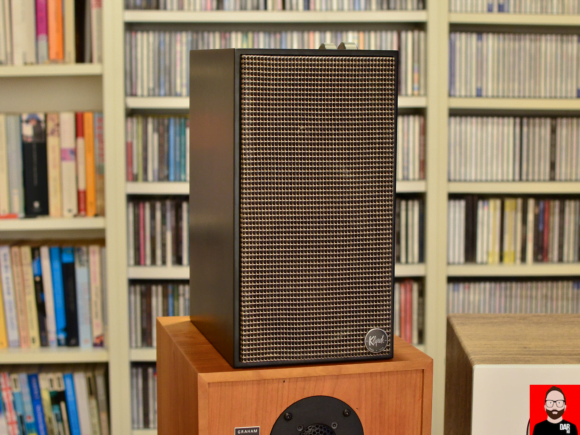 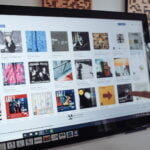 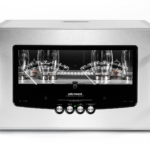