October 2019. I was invited to Max Schlundt Kultur Technik, one of Berlin’s larger hi-fi stores, for a ‘first listen’ to the KAYA S12 from Vivid Audio. The pre-production sample was being toured around Vivid’s dealer network ahead of its official debut at the Warsaw AV Show a month later.

This week, Vivid Audio has announced that the KAYA S12 has finally gone into UK-based production. The two-way standmount owes its Weebil-like shape to designer Laurence Dickie’s flair for creating less-conventional-looking loudspeakers; he lent Bowers & Wilkins’ US$60K Nautilus its striking appearance and Vivid’s own GIYA range is anything but vanilla.

The KAYA S12’s physical form isn’t only the result of aesthetic considerations. The 12-litre RIMCast Polyurethane cabinet’s curves reduce edge diffraction and permit time-alignment of the D26 tweeter’s output to the C100D mid/bass driver. The cabinet also gives the tweeter a waveguide and, on the inside, accommodates an ‘exponentially tapered tube-loaded reflex’. Both drivers are designed and manufactured in house.

However, the KAYA S12 is the first Vivid loudspeaker to implement the company’s new – and similarly patented – Omni-Absorber which, according to the press release, “annihilates the common distortion all other two-way monitor designs suffer from.”

The Omni-Absorber’s inspiration was presented to me in Berlin by way of an iPhone photo of a 12-fingered piece that combines cavities of different (acoustic) properties. This ultimately led Laurence Dickie to develop a ribbed inner-shell for the Kaya S12 that would absorb internal resonances in a similar manner to the 12-fingered piece, all without compromising Kaya S12’s reflex port bass extension. 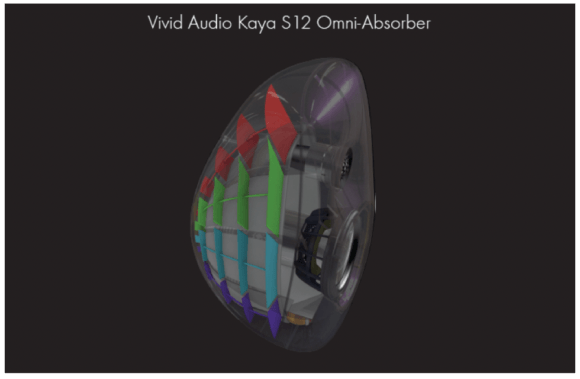 The KAYA S12 will show any connected amplifier 87dB of efficiency and a nominal 8 Ohm load which, according to Vivid, bottoms out at 5.3 Ohms.

The new model will be offered in a range of automotive finishes – Piano Black, Pearl White, Oyster Matte – for which pricing has been set at £5995/pair. Custom colours are available on request.