Wharfedale reportedly gave Fink a clean slate from which to work. For the mid/bass drivers, the German waved farewell to the familiar Kevlar to produce a new composite material called Klarity™, one that combines polypropylene with Mica for increased stiffness. The new drivers enjoy a new low-damping driver surround for lower colouration and superior dynamics and are driven by a precision-made magnet system with an aluminium compensation ring to “minimise the effect of variations in inductance as the voice coil travels”.

The tweeter in each new Diamond 12 Series model is a one-inch woven polyester dome finished with a high-gloss coating for a smoother high-frequency response. The associated magnet system and the front plate have also reportedly been optimised for “wide dispersion and uncompressed behaviour”. 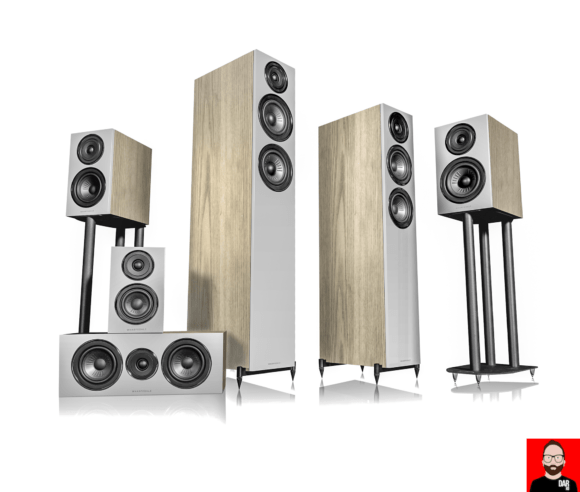 On the Diamond 12 Series’ crossover, the press release reports an ‘an acoustic LKR 24dB topology’ that makes use of low-distortion air-core inductors: “As the resistance of the coil is higher than a standard laminated steel or ferrite core inductor, the magnetic structure of the mid/bass driver has been modified to compensate, resulting in fast, clean bass with no distortion from the inductor.”

Each Diamond 12.x model’s internal cabinet volume has been chosen to optimise the drivers’ combined frequency response and its internal bracing computer modelled to minimise cabinet resonances. The result is walls made of wood fibreboard but of varying thicknesses, a special glue to join them together and opposing walls internally connected for what Wharfedale call ‘Intelligent Spot Bracing’.