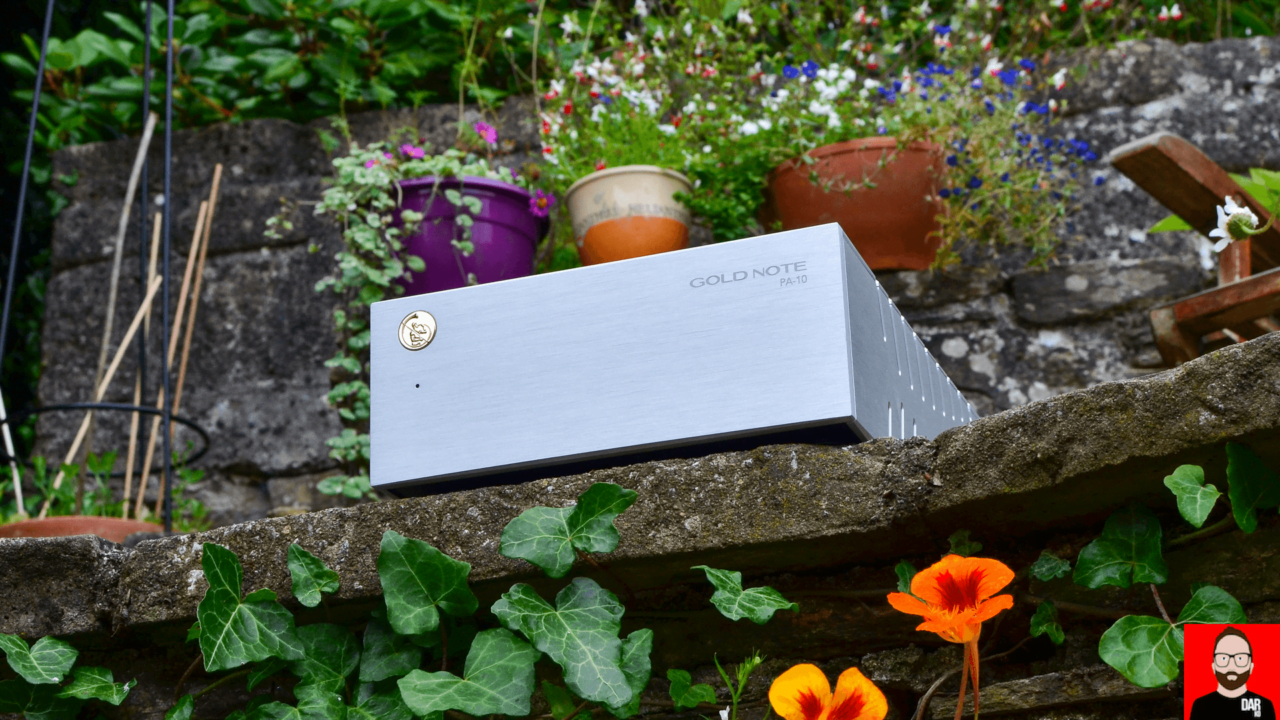 It’s been a few months since we looked at Gold Note’s £2500 DS-10 streaming preamplifier (review here). Combining small form factor with broad functionality and excellent sound quality, the DS-10 made a positive impression. That positivity has since grown in recent weeks with the addition of the DS-10’s stablemate, the PA-10 power amplifier (£1264 / $1699 / €1390).

The two look like natural bedfellows: a compact and stylish hi-fi system that even the most reluctant audiophiles would covert. (There is no reward point program for enduring poor outward aesthetics when pursuing better sound – Ed). This two-fer’s combined price of £3800 is within luxury lifestyle-system territory.  Does the small PA-10 match the DS-10 on sonic prowess? Or has something had to give to reach this price/size point? And how does it fare in a non-Gold Note environment? Can it thrive with other manufacturer’s equipment or does it need the comfort blanket of its siblings?

Gold Note supplied 2 x PA-10 so I could try both stereo and mono modes. Game on. 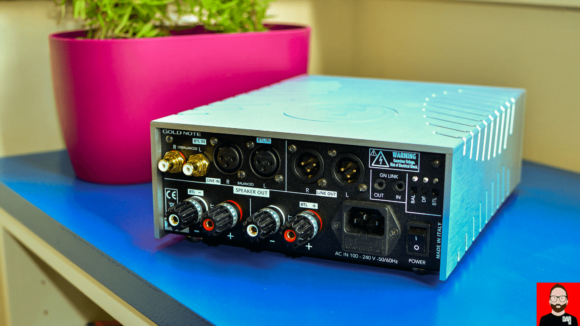 Further flexibility comes with variable damping – the control an amplifier exerts over the speakers – achieved by changing the output impedance of the amplifier. Measured as the ratio between the loudspeaker impedance and the amplifier’s output impedance, the PA-10’s default is 250 (high), suitable for large or difficult-to-drive speakers according to Gold Note. Low damping – at 25 more akin to valve amplifiers – possibly (but not always) better for smaller speakers. Experimentation with one’s own setup is the order of the day. Easily done, we can even switch damping on the fly.

The PA-10’s output stages use Gallium Nitride MOSFETs that double the power output with every halving of impedance. It’s a proprietary design whose behaviour aims to mimic that of pure Class A design but with greater power efficiency. Switch-mode power supplies bring the wall juice. Linear power supplies do not have a monopoly on high-end audio applications. 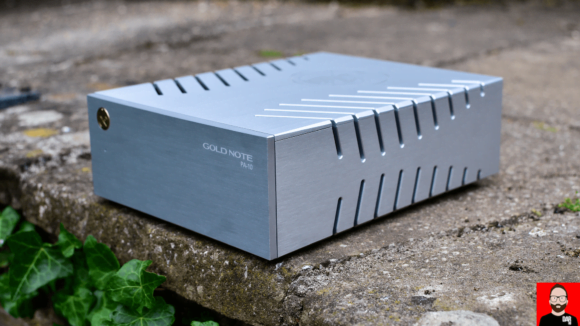 Looks, functionality, build
The PA-10’s front panel is refreshingly clean. A small Gold Note logo and a blue power LED. That’s it. In a rack, the PA-10 is largely anonymous (in a good way). On a rack, Gold Note’s ubiquitous air vents are prominent.

The rear panel is busy for a power amplifier. Balanced and single-ended inputs are expected at this level but balanced outputs? These are nothing to do with running the PA-10 in mono mode. Rather they allow an additional power amplifier to be connected to the PA-10. Either to bi-amp your loudspeakers or to run a second set of speakers in a different system. Of limited use, I’d have thought.

Three dip-switches swap between stereo/mono, balanced/single-ended and high/low damping. Blue LEDs indicate the status of each. There are also 12V triggers to switch the PA-10 on via the DS-10. That’s useful with the PA-10 on/off switch being on the back too. Finally, there are four good quality loudspeaker binding posts. 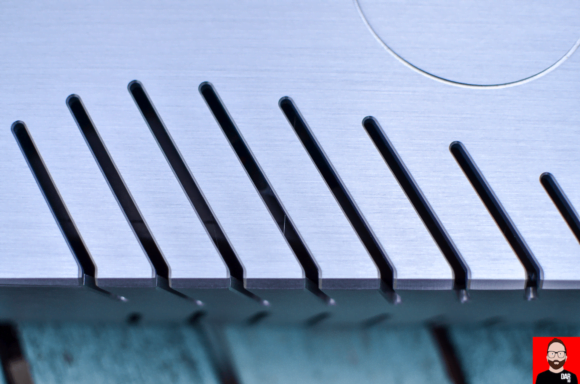 Getting close to the PA-10 when sitting idle (no music playing) we hear a slight ticking noise. It’s not noticeable from more than 50cm away. With music playing it’s completely inaudible. That might be an issue if you plan to use the PA-10 in a desktop system (lucky you). In practice not a problem for this review, but readers should be aware. Gold Note explains:

“The noise is due to the special power supply we developed specifically for the PA-10. If the power supply were to be completely shielded the noise would not be detected but given its power, we opted for a design that would guarantee optimal cooling, which we call “power safe design”. When the PA-10 is idling, it generates the almost inaudible noise which disappears completely when the PA-10 starts to play music” 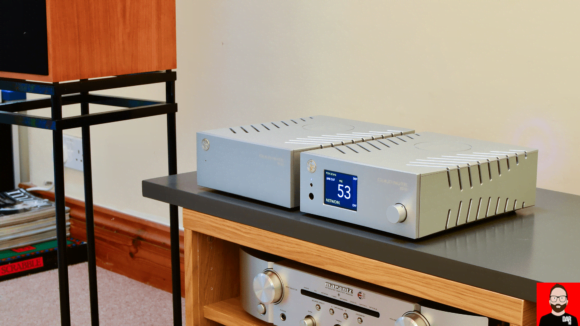 Listening
Before that, I took the temperature of the GoldNote DS-10 working as pre-amplifier and the Ayre AX-7e as a power amplifier. It offers a big-boned sound, slightly warm in the valve mould and full of texture. The DS-10 preamplifier ensures we hear the detail that the Ayre’s own pre-amplifier masks. Overall, it’s a sound I’m familiar with. Heart more than head, emotion before analysis.

Out with the Ayre, in with a single PA-10. The differences are soon apparent. More clarity and control top to bottom. The swirling soundscape of Derrick Hodge’s Colour of Noize (brilliant album) is far more decipherable via the PA-10 than the Ayre, particularly when the music steps up a gear a minute into the opening track. Pulsing rhythms and 10dB louder, the Ayre paints an impressive wall of sound, sucking us into the maelstrom. The PA-10 trumps it with greater dynamics and even more momentum. Bass is fuller and better controlled. And the PA-10 better reveals the minutiae of what’s going on. Brains and brawn.

I change gear to Stephen Stubbs’ ‘Refrains’ from John Potter’s Care-charming Sleep. This is my go-to music for pared-back beauty. And the PA-10 nails it. The silence between notes is delightful, the decay of notes connoting a degree of delicacy I’ve not heard before. Sarah Jarosz’ ‘Hometown’ from World on the Ground is handled equally well. Singer-songwriter plus small band fayre, Jarosz’ voice is gorgeous through the little Gold Note, her growing maturity evident.

Overall the PA-10 has a detailed and controlled sound. No surprise there, that’s a Gold Note forte, at least with the equipment I’ve tried. Where the PA-10 differs from simply being precise is in keeping the baby (warmth, texture & richness) whilst throwing out the bathwater (bloom & smear). The PA-10 sounds both nourished and detailed.

Variable damping
I switch to low damping. Think ¼ spoon of sugar in an espresso or a splash of water in a malt whisky. The music comes on as gentler, sweeter. Flow replaces precision. That would normally play to my preferences but a slight looseness has crept in. It’s marginal but after some deliberation, I revert to high damping. 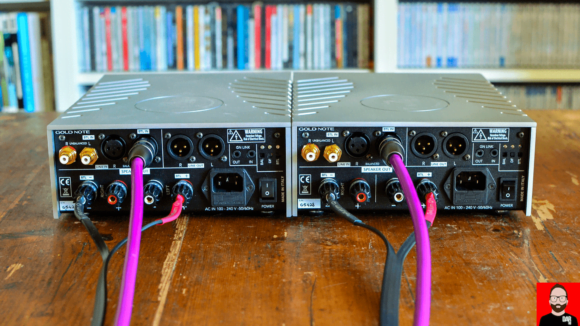 Even more noticeable is another increase in precision and control, hand in hand with an uptick in realism. There’s also greater dynamic freedom, the twin PA-10 tracking musical swings more easily and retaining a slight richness. A single PA-10 takes two big strides ahead of the AX-7e’s sound. Doubling up takes things a good stride further. The benefits of mono mode are easy to hear. Although, unusually, switching back to stereo mode doesn’t leave us feeling bereft. 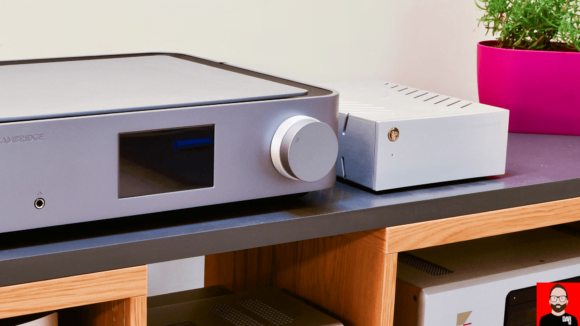 With Cambridge Edge NQ
In essence, the Edge NQ is a bigger DS-10 but with analogue inputs. Its in-house dance partner is Cambridge’s 100wpc Edge W power amplifier (£2500). That doesn’t mean we can’t connect it to another manufacturer’s power amplification.

On a visual level, the Cambridge’s pairing with the PA-10 is a dog’s breakfast. Individually lovely, together they’re Rocky and Bullwinkle. Sonically though it really works well: an even bigger soundstage than the DS-10 on Color of Noize, more dynamic too. Sarah Jarosz sounds even more natural. Stephen Stubbs’ playing is positively crystalline but without any edge to the sound. It’s a very palpable sound, the ‘being-there’ quotient upped a good notch or two. The upshot? The PA-10 clearly reveals the differences between the DS-10 and the Edge NQ. 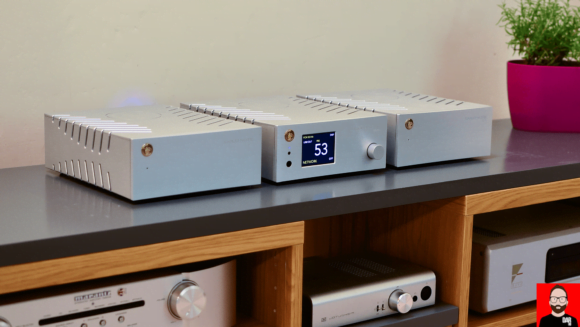 Summary
The PA-10 is impressive whether in stereo or monoblock mode. With its matching DS-10 preamplifier, it’s a 2 (or 3) box solution whose performance goes beyond expectations set by its size. The very recently announced PSU-10 Evo power supply for the DS-10 (€1100) would extend the box count to four.

The PA-10 is equally at home in a mixed environment, excelling with Cambridge Audio’s Edge NQ. It even worked well with a £400 Schiit Jotunheim headphone/pre-amplifier that I tried, albeit briefly. The Gold Note power amplifier’s sound doesn’t grab our attention in a showy way. Its strengths are revealed through extended listening, most notably an ability to provide copious amounts of detail whilst maintaining just the right degree of soul.

Bar the Klipsch Forte III – a-love-it-or-hate-it loudspeaker – the Gold Note PA-10 has excited me more than anything else I’ve reviewed for Darko Audio. I didn’t think a simple power amplifier would do that. Bellissimo! 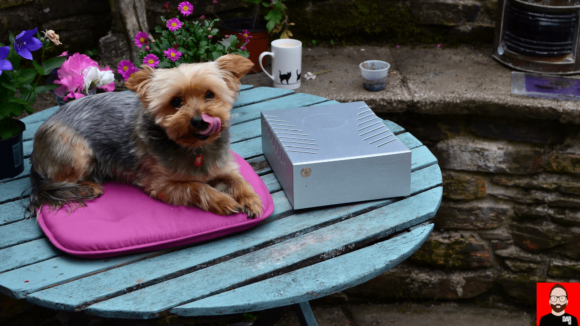 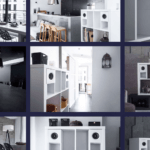 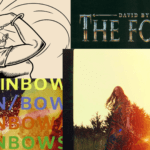