Got a turntable? You’ll need a phono pre-amplifier to 1) elevate the signal to a high enough level for your loudspeaker/headphone amplifier, 2) present the correct impedance to your turntable’s cartridge and 3) reinstate lower frequencies with EQ.

Phono pre-amplifier circuits built into integrated amplifiers tend to be MM only: RIAA EQ, preset to 47K Ohms with a single gain setting applied. Those that offer MC compatibility will run the same RIAA EQ through a higher gain setting and a different (but still singular) impedance value.

However, experienced turntablists know that an MC cartridge’s optimal impedance varies according to model. It’s why they reach for step-up transformers and/or external phono pre-amplifiers.

iFi’s iPhono pre-amplifier, now in its third generation, seeks to redress these customisation shortcomings with an abundance of possibilities. The iPhono3 Black Label announced this week talks to both MM and MC cartridges and, via an array of underbelly-mounted DIP switches, offers gain settings from 36dB to 72dB, eight (impedance) settings for MC and five (capacitance) settings for MM. We also get the choice of three EQ curves: RIAA for vinyl records pressed after 1980 but Columbia or Decca for some that were pressed before.

From the press release: “For example, many of Deutsche Grammophon’s classical records released before 1980 can sound dry and flat – this is because they were produced using the Decca EQ curve and very few phono stages provide this option, but with the correct EQ applied they sound superb. As a general rule, if an LP sounds thin and edgy with the RIAA EQ, try the Decca EQ curve; if it sounds overly bright with overblown bass, try the Columbia setting.”

The iPhono 3 Black Label also boasts a coupling capacitor-free circuit that the British manufacturer has dubbed ‘Direct Drive Servoless’. From Wikipedia: “In analog circuits, a coupling capacitor is used to connect two circuits such that only the AC signal from the first circuit can pass through to the next while DC is blocked. This technique helps to isolate the DC bias settings of the two coupled circuits.”

Also included in the iPhono3 Black Label is iFi’s ‘TubeState engine’ that aims to furnish listeners with “a sound of exceptional poise – crystalline clarity without a hint of edginess; free-breathing dynamics; engaging pace and timing; and a soundstage brimming with texture and fine detail.” 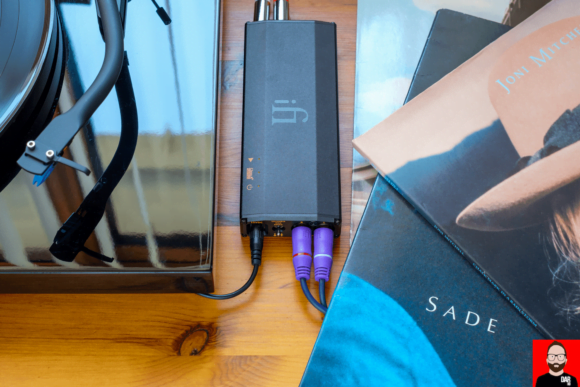