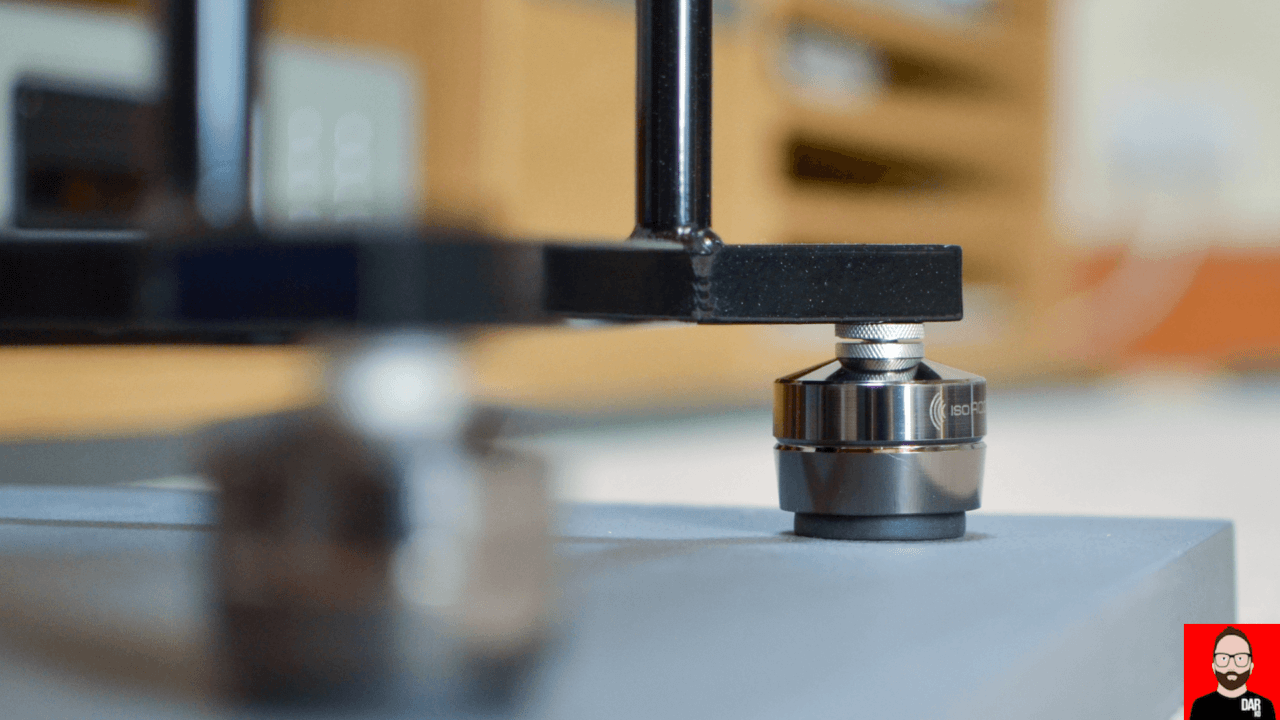 Loudspeaker supports can impact sound quality. It’s something I first discovered when setting up a pair of B&W 802 floorstanders a (long) while back. Each loudspeaker weighed the same as I do, a set of ‘lockable-ball’ feet essential for moving each one around to find the best position. I eventually got it right to make them sound fantastic.

My dealer then suggested swapping out the ball-feet for the supplied spikes. After all, I wouldn’t need to move the 802s again, would I? I undertook the careful work to install the new footwear, then sat back to assess any differences. Yup. Better bass, greater clarity. A surprising finding and a lesson learned: spikes rule!

Or do they?
Except Canadian firm IsoAcoustics begs to differ. Their view is borne of considerable experience in the design of professional studios that includes twenty years’ work with the Canadian Broadcasting Corporation. Maybe we should listen to what they have to say? From the IsoAcoustics website:

“Internal reﬂections are another consequence of speaker placement which can result in a loss of sound clarity and can cause sounds to become less three dimensional and spacious. Vibrations are inherent in the speaker, but any vibrations reﬂecting off the supporting surface and returning through any mechanical connection are a cause of internal reﬂections”

And spikes reflect more vibrations back into the speaker than compliant supports – where some movement is allowed – as shown by the measurements on IsoAcoustics’ website, taken in both anechoic and real-world scenarios. The overview of the technology is an interesting read. IsoAcoustics’ products clearly derive from solid engineering principals. That they also supply to the pro audio sector – not known for its love of tweaks – reinforces this. 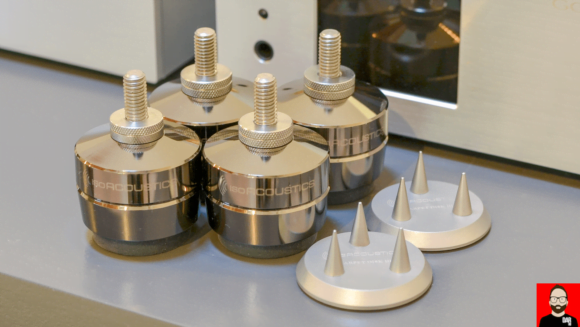 The Gaia III
The Gaia III are simple in concept; replacement feet that screw into the base of a loudspeaker instead of the supplied spikes or ballfeet. Six variations cater to different speakers weighing up to 280kg (gulp). The smallest Gaia III supports up to 32kg – a good match for the ~20kg Spendor D7.2 and Classic 1/2 speakers (£4,500 / £5,500) that I’ve been enjoying since their review.

The D7.2s are floorstanders, so the Gaia III simply replace the supplied spikes in the four corners of each loudspeaker’s base. The Classic 1/2s are large standmounts, so the Gaia III replace the spikes on the bottom of the stands. ISOAcoustics say this shouldn’t work as well given that the isolation feet are further from the loudspeaker being isolated. Thankfully, no one told the Classic 1/2. 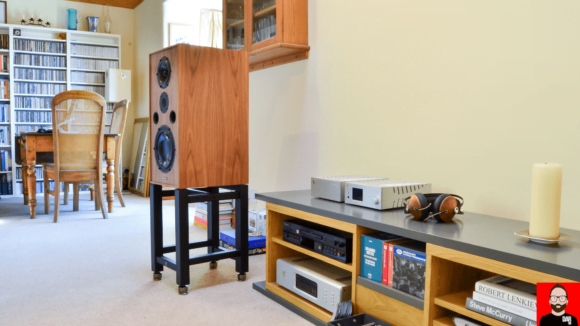 Installation
The Gaia III feet are supplied with the three most common thread sizes – M6, M8 and ¼” – with others available on request. Installation shouldn’t be difficult – unscrew existing spikes, screw in the Gaia III – but in practice it sometimes is. You have to level the speaker whilst simultaneously orientating the Gaia III feet such that the logo faces forward (or backward). That’s easy if your floor is level, less so if it isn’t.

Orientating the Gaia III feet identically is necessary because the technology is directional, a design point explained by UK distributor SCV….

“The directionality helps manage the on-axis movement of the driver, combining isolation, energy absorption but also providing enough resistive force for the driver to move quickly and efficiently. That’s obviously very important, especially for dynamics and timing. During testing, IsoAcoustics tried hanging speakers from bungee cords, which gives great isolation but the dynamics and timing go to pot as the driver and cabinet have no opposing force to push against.”

With the Gaia III in place, pushing the speaker side-to-side does indeed cause more loudspeaker movement than pushing them front-to-back. The amount of ‘give’ is disconcerting at first. As with double-decker buses you soon learn to trust the engineering that’s keeping things upright.

The Gaia II accommodate heavier floorstanders but the installation principles are the same as the Gaia III:

Looks & build
In isolation (pun intended), there’s little to say about the Gaia III’s looks. Made from cast metal with a plated finish that’s then lacquered, they’re nicely finished and look very smart in the palm of your hand.

In situ, it can be a different matter. The Gaia III changes the overall aesthetic of the loudspeaker setup and not always for the better. It’s subjective of course but for me, the Gaia III didn’t enhance the clean lines of the Spendor D7.2. Conversely, they looked fine with the Classic 1/2, the diameter of the feet matching the width of the stand leg. On small details do these things turn. Best to give the looks some consideration before trying them as – spoiler alert – you might not want to give them back. 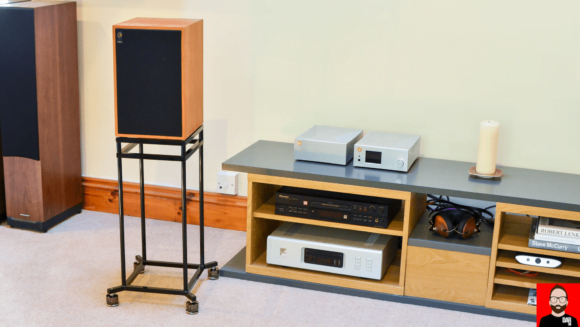 Listening
The Spendor loudspeakers were driven by Gold Note’s DS-10 Pre/DAC streamer (£2,500) and a PA-10 power amp (£1,264), with Tellurium Q Black 2 speaker cables (£270) providing the final connection. Whether spiked or ‘Gaia’d’ the speakers sat on stone slabs, themselves resting on screws pushed through the carpet into the floorboards underneath. IsoAcoustics’ carpet shoes worked equally well sonically and were more discrete but the slabs made it easier to swap things around.

Briefly recapping the Spendor review: I heard a full, rich and natural sound from the Classic 1/2 but precision from the D7.2 whose taught bass and better-extended treble connotes more of a live feel. Each loudspeaker model impressed in its own way, my preference flip-flopping between them. In a perfect world, I’d want a hybrid of the two – more precision and a slightly firmer bass from the Classic 1/2 but more body and warmth with the D7.2. Nope, I’m never satisfied. 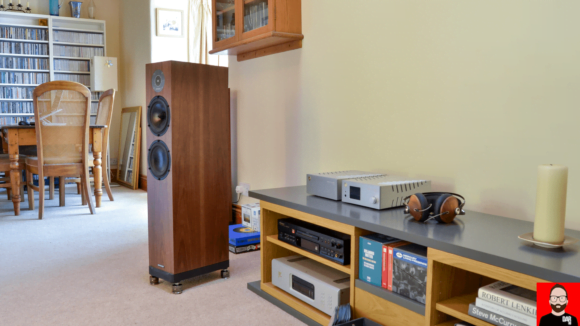 The Gaia III also allows more detail to come through but it’s less a lifted veil than a camera lens nudged into focus. This lack of smear – IsoAcoustics’ favourite phrase – works wonders on the soundstage specificity. Think: taking photos with a high-quality lens rather than relying on Instagram filters to mask the lens’ shortcomings. This aspect of the Gaia III’s improvements makes for the longest-lasting impression.

The Gaia III move the D7.2 in the same direction as the Classic 1/2 but not quite as far. A shade less than half the distance. Bass gains some welcome heft whilst remaining taught. Detail retrieval is even easier to discern even though the D7.2’s higher frequencies are rendered a smidge sweeter. Think gently burnished, a small step towards the ‘natural’ sound of the Classic 1/2. The sum total of this amelioration is greater musical impact. ‘Drop Drop Slow Tears’ from Voces8 is positively ethereal. ‘2287’ is now broodier, more foreboding, the artificial soundstage notably wider and deeper. The D7.2 got themselves a bit of soul.

Two loudspeakers with two distinct sonic signatures, both benefiting from the addition of the IsoAcoustics Gaia III, but one more than the other. The extra clarity afforded by the change in feet nudges the Classic 1/2 closer to the D7.2’s already top-shelf performance in this area. Applied to the D7.2, we hear a more relaxed-sounding loudspeaker. A brief dalliance with the feet under the stands of my small Graham LS6 speakers – a setup the Gaia III weren’t specifically designed for – delivers similar improvements, removing detail smear, enabling the speakers to disappear even more than they did before. 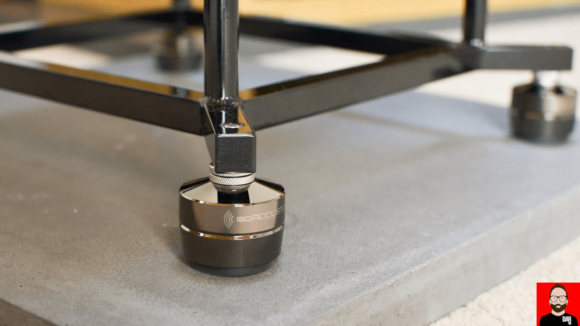 Conclusions
Both Spendors are good to start with but the Gaia III affords them greater clarity, better-controlled bass and a broader, deeper soundstage that’s easier to hear into. There are zero audible downsides. They do what they say on the tin. To whichever loudspeaker I applied the IsoAcoustic feet, I found myself returning to one question: “Is this what this loudspeaker is supposed to sound like?” Maybe you should delay your next loudspeaker upgrade and try the Gaia III instead. 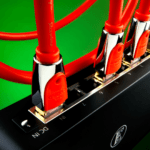 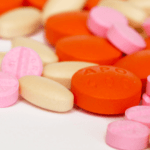