Working the waves. Riding them is for surfers. Bending waves is for German Physiks, Manger & Co. Falling somewhere between was the Linæum driver. Slightly evolved, it reappeared with Impact Technology’s Airfoil. When that disappeared, eventual descendants like the Swiss Audio Consulting Rubanoïde and all the current French Audionec models revisited the concept with their own executions.

However, the original inventor of that driver’s concept, Paul Paddock, is back now with MC Audiotech and his Model Forty-10 speaker. Its first number represents Paul’s 40 years of accrued R&D into this unique technology. Beneath the speaker’s faceted hood hide … well, 10 of these latest-gen drivers which Paul calls a “predictable flexible membrane” transducer.

“My original invention patented in 1985 had a twin-cylindrical diaphragm driven at its junction by a vertical wire loop located between a dual magnetic gap ‘voice coil’ system. This device was commercialized by the Linæum Corporation from the late 1980s through much of the 1990s. The Impact Airfoil Loudspeaker later employed a slightly different design with a single membrane again of my own design.”

“Since then I have continued to develop and improve the concept, resulting in a WBLS transducer which exhibits greatly enhanced bandwidth, sensitivity and reliability. Its flexible plastic membranes are about the thickness of paper. The wire loop bonded to the central area interacts with the magnets and drives the central area forward. The physical action sets up wave motions in the membranes which radiate through the plastic expending their energy as sound. The curvature, size and physical qualities of the plastic membranes define the predictability of the transducer. In practice, the driver’s operational width changes with frequency. It becomes larger with decreasing frequency and narrower with ascending frequency. This is shown by the extremely even and broad polar pattern, smooth response and non-reactive impedance curve.”

Spec-wise, Paul’s spaced array of wave-bending/riding drivers covers the very broad bandwidth of 100Hz – 20’000Hz at a usefully high 96dB sensitivity. That only leaves 20-100Hz for the active subwoofer beneath the array. A low-frequency controller box contains the passive crossover for the array and an active filter and gain adjustment for the woofer.

Had you wondered what happened to that fantastic Linæum tweeter and its short-lived midrange version, now you know. It simply hibernated for 30 years. But it just awoke to roam the audiophile streets again. Shakabrah. 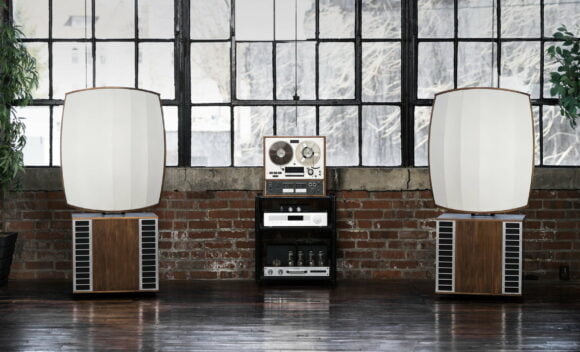