For digital audio dads and cloud streamers, the configuration complexity of software used to stream music can be overwhelming for many a newcomer. By the time we’ve got the server correctly configured, the network streamer connected to our amplifier and a smartphone or tablet in hand, ready to tell the server what to send to the streamer, we’re simply happy to bathe in the sounds of something familiar: a classic album from our teenage years or the song that soundtracked an early romance.

Not that setting up Roon is especially onerous. We install the Core (server) app to any Windows PC, Mac, Linux box or QNAP/Synology server. On its first run, Roon will scan the local network for available streaming endpoints: devices to which it can stream a digital audio file. That file can be pulled from the cloud (Tidal or Qobuz), directly-attached hard drive or network share. We can then use any other instance of Roon – desktop or smartphone app – to remote control what the server sends to each endpoint.

Roon endpoints can be anything from a computer running the Roon desktop app to a smartphone running the Roon Remote app to a network streamer running Roon Ready code (installed by the manufacturer) to a Raspberry Pi running Roon Bridge to a Google Chromecast device to an Apple AirPlay device to a Squeezebox streamer to a Sonos. The endpoint possibilities are numerous.

Familiarity’s comfort with music allows us to momentarily forget about how streaming setups just aren’t as simple as CD players or turntables, no mind that they connect our hi-fi/head-fi systems to pretty much any piece of music ever released.

This sky wide menu introduces a fresh kind of angst. In deciding what to play, we find ourselves overwhelmed by the tyranny of choice. And where we once read Mojo or Rolling Stone magazine from cover to cover to learn of new releases, we no longer have the time or energy. As we get older, the friends that would once phone us just to tell us about a new ‘must-hear’ album fall away. They become, like us, lost to their own lives: their careers, their families, the mundanity of car maintenance, holiday planning and grocery shopping.

The headline for Roon v1.6 wasn’t (only) its integration of Qobuz but a new and improved Roon Radio, no longer restricted to locally stored files, it could stream similar songs from Tidal and Qobuz to keep the music flowing once the current playlist had run its course. At the time, I framed it as Pandora radio for lossless lovers and I still find it unbeatable for music re/discovery; of songs I’d not previously heard but also songs I’d forgotten about and, in rarer cases, songs I’d forgotten how much I loved. Roon v.16 tackled head-on the notion of a music library manager as tool for music discovery.

Roon Radio’s song selections are powered by code that Roon’s software team has subsequently dubbed Valence. This code reportedly learns from the clicks of its 100,000-strong user base to make ongoing improvements to the relevance of its song delivery. 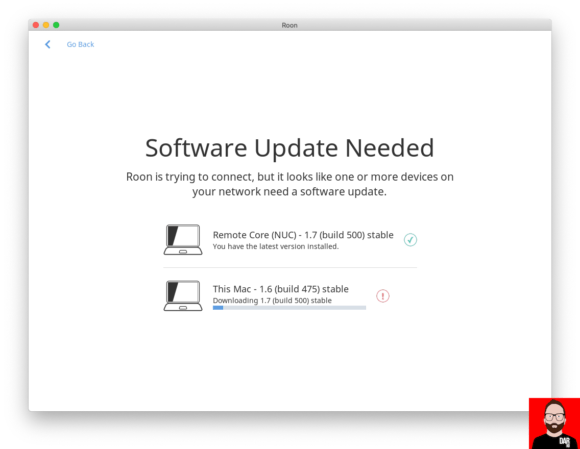 From the press release: “In most streaming apps, ‘New Releases’ are just a list of everything that’s been released this week, or sometimes only certain titles that are being marketed. Valence lets Roon show you new releases you care about, based on your library and listening history. The more you use Roon, the better the ‘New Releases’ will get!”

The inclusion of David Bowie, Nick Cave & The Bad Seeds, The Pet Shop Boys and Plaid are spot on the money for yours truly but Celine Dion’s inclusion (see above) means the code still has some learning to do. Valence needs time to learn from the Roon user base’s clicks. If no-one clicks Dion, she will eventually disappear. Conspiracy theorists stepping into this void with suggestions that someone is paying Roon to ‘push’ Celine Dion are advised to sit down with a cup tea to contemplate that which they don’t yet understand; that not all of it is a plot against them.

If we click on David Bowie’s Conversation Piece, the album screen tells us that this is an early years box set featuring recordings that immediately predated Bowie’s 1969 hit single “Space Oddity”. Look carefully down the side of the tracklist and we see another new Roon info panel: ‘Recommended For You’, which in my case displays albums from Echo & The Bunnymen (which I know) but also Common Holly, Allen Stone and Fenella (which I don’t). New music discovery is only two clicks away.

If we click David Bowie’s artist name instead, we are cut over to his artist page and another new feature: below Bowie’s name sits a ‘Play Now’ button. Click that and the Valence code will play songs from what it determines to be his heyday period. I clicked through Valence’s song choices, ready to reprimand it for playing anything released outside of the 1970s and it took six skips before 2002’s “Slow Burn” made an appearance (which isn’t actually that bad).

Roon v1.7’s search reportedly pulls from more metadata points than previous versions but Roon Labs also promises that 1.7’s search is much faster and more accurate to boot. Its slowness for some users has been a long-standing headache so hopefully, this updates resolves those issues. 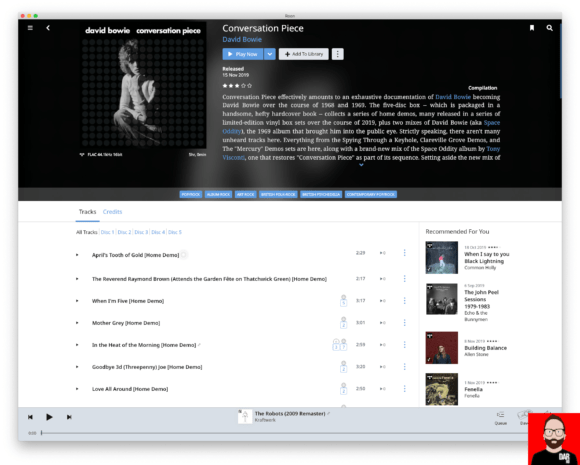 v1.7 of the Android version of Roon Remote has seen its code reworked for reliable background playback and introduces more elegant behaviour when a phone call comes in or when a headphone jack is removed from the phone’s socket. The Android app’s signal path function will now report exactly what the Google OS is doing to sample rates. Remember the fun I had with that a few weeks ago? For Tidal and Qobuz users, there is now a drop-down to set streaming quality. And anyone running Roon ROCK – on a Nucleus or on a NUC – should expect to see significant performance enhancements.

Our final Roon v1.7 highlight is Live Radio. Not to be confused with Roon Radio, Live Radio is a side menu option that gives us one-click access to over 1000 radio station streams, some available in more than one bitrate. Roon seems to know that I’m in Berlin and lists a broad selection of local stations ahead of its main directory.

A complete list of Roon v1.7’s new features can be found here.

Roon membership is US$119 per year or US$699 for a Lifetime of access. A 14-day trial is also available. 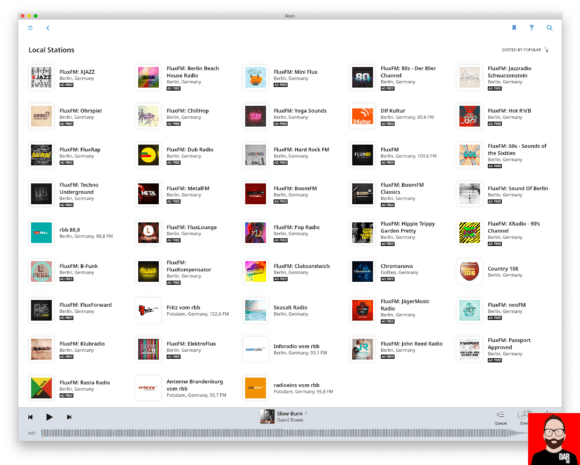