To vinyl or not to vinyl? That was the question when compiling a €750 hi-fi system. YouTube commenters on the ‘Complete €1000 hi-fi system’ video had expressed varying degrees of surprise as to the turntable’s inclusion but a follow-up poll revealed that over half of this channel’s audience own a record player. Go figure.

For a complete €750 hi-fi system, Euro-style, I would continue as before but lower the percentage spent on vinyl playback: a Pro-Ject Primary E (€131) and its somewhat basic Ortofon cartridge gets us up and running with vinyl playback but the audible result, per my experience with Ortofons OM5 and OM10 in Australia, is likely to be anything but life-changing.

The Pro-Ject turntable features no in-built phono stage so we must find one elsewhere. NAD’s C328 integrated amplifier (€369) fills in that black, augmenting its MM phono input with Bluetooth streaming, a headphone output and 50wpc of Class D loudspeaker drive. Add a Raspberry Pi (€50) or Google Chromecast Audio (€30-40) for network streaming.

On loudspeakers, I served up three possibilities, each with their differing efficiency and nominal impedance ratings, which matters when matching an amplifier to a passive loudspeaker (or vice versa). According to their respective manufacturers, the ELAC Debut 2.0 5.2 (€265) would greet the NAD with 86dB and 6 Ohms, the Wharfedale Diamond 11.1 (€214) with 87dB and 8 Ohms and the Klipsch R-51M (€203) with 93dB and 8 Ohms.

Think you do can do better? Tells us about your €750 system build in the YouTube video’s comments section: 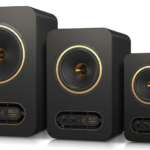 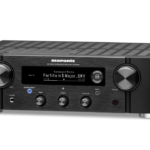