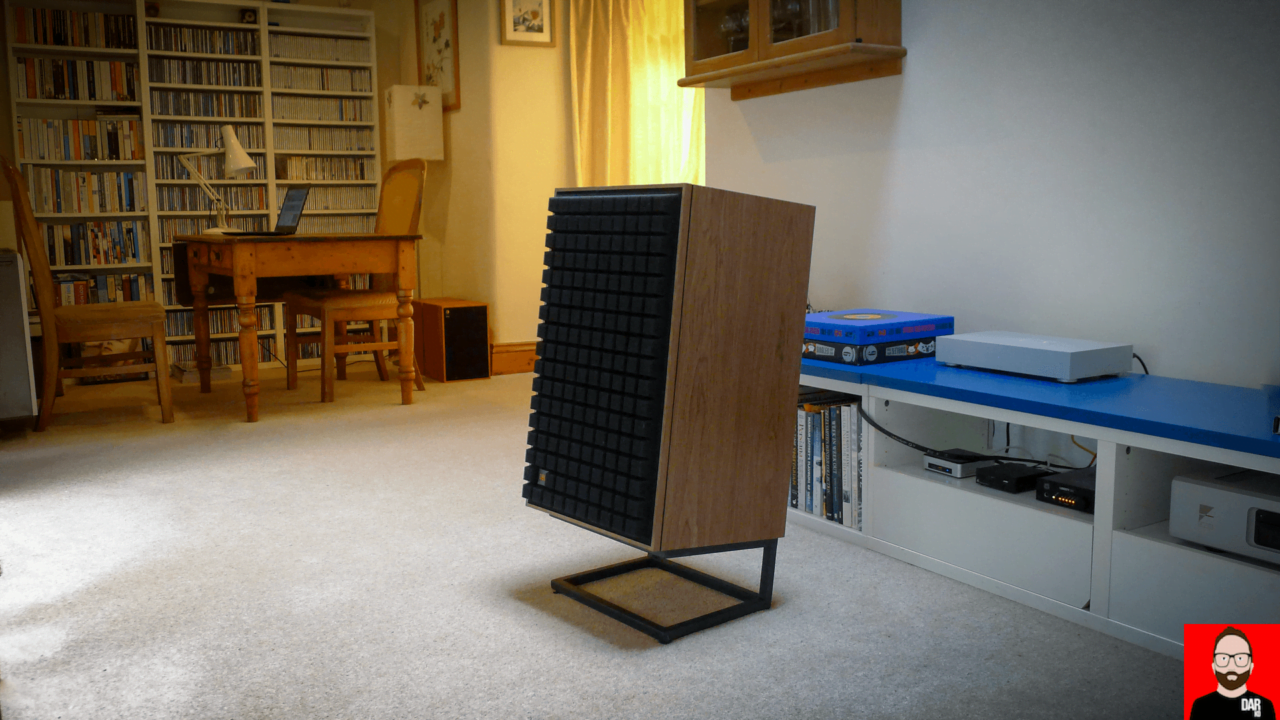 Still retro in looks, the JBL L100 Classic’s heritage snakes back to 1970. Its role in those Maxell TV ads (here & here) lives on. “Night on a Bare Mountain”, the music used in the UK spot, was first to sound forth for this review. “Ride of the Valkyries” was used for the US version. Both are good markers for the revised JBL’s sound: big & bold.

The original L100 was JBL’s biggest seller of all time. The L100 Classic is that loudspeaker reinterpreted for the 21st Century. Retro cool is riding high. Witness the Klipsch Forte III ($4k) that graced these pages recently. Both the JBL and Klipsch sell for the same coin: £4k/$4k/€5.2k. But thoroughly modern pricing demands more than just retro style. The Klipsch exceeded expectations; how do the JBL fare? 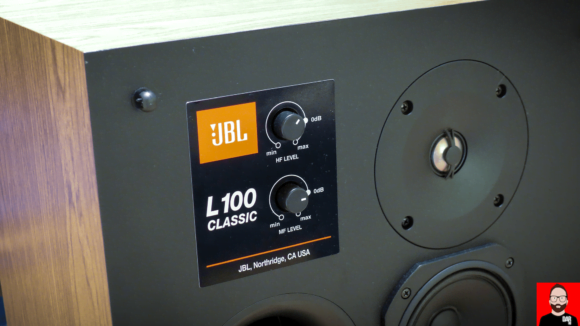 The essentials
A true three-way speaker, the L100 Classic uses a 300mm pure pulp bass driver and a 125mm polymer-coated midrange driver. The tweeter is a 25mm titanium dome. Sensitivity is good at 90dB although we should note the nominal 4 Ohm impedance. Bass is quoted as -6dB at 40Hz but the L100 Classic sounds like it goes much lower.

Amusingly termed a bookshelf speaker, the L100 Classic is anything but. At 640x390x370mm (HWD) and 27kg, it’s a large heavy standmount. Clearance of at least 50cm from the front wall is recommended.

The dedicated stands sell for an additional £325/$300/€375. Low and canted back, they look good, even if the absence of front pillars slightly impacts. Their style is key to the retro vibe though; music-first audiophiles will fret little.

The L100 Classic offers midrange and treble adjustments via controls that sit above the front port – genuinely useful in tailoring the speaker’s output to the room or taming a treble that can overreach at times. Single wiring terminals adorn the back.

The finish is Henry Ford style – any finish as long as it’s walnut, although both the front and back panels are black. Build quality is good, my only concern being whether the plastic lugs for the grills will stand repeated use. 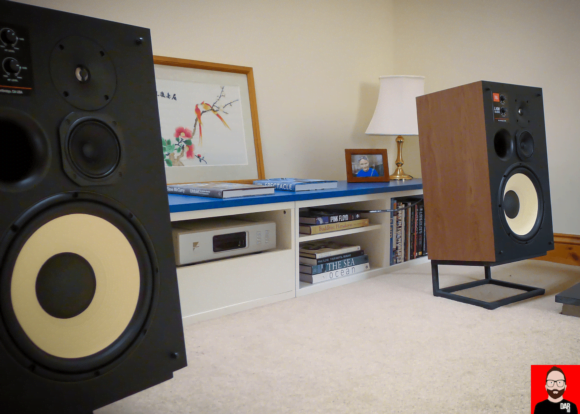 And so to those grilles, which are to the JBL as outrageous glasses are to Elton John – fundamental to the persona. Featuring the iconic Quadrex (cubic) foam, they’re available in black, blue, or bright orange, the latter raising a rebellious finger to the rest of one’s decor. Absolutely fabulous.

Frustrating then that for me, the L100 Classic sound better without them. Better clarity, more air around performers, extended treble. Basically less muffled. With grills on, Talk Talk’s “Myrrhman” loses much of the inner detail that underpins the track. So grilles off for serious listening, grills on at other times, hence the question on lugs. Unless we prefer the more pro-orientated vibe of the L100 Classic sans grilles – that cream-coloured bass driver dictates the look.

Finally, the L100 Classic isn’t too fussy on positioning – angled in slightly, 180cm apart and 80 cm from the front wall worked fine in my room. Those without high ceilings may need to experiment a bit more.

Speakers for comparison were the Graham LS6 (£2200) and Revel M126Be (£4000). The Klipsch Forte III provides another reference point – aural memory is far from ideal but in this case, it’s pretty fresh, and well, the two retro kings just cry out to be compared don’t they? 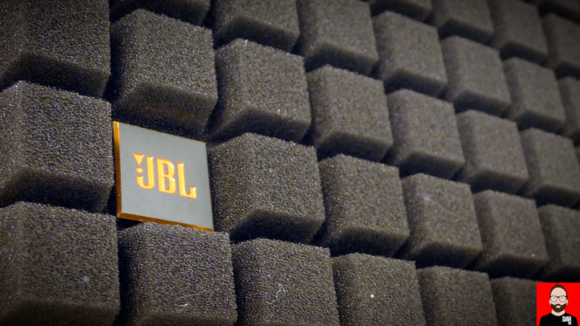 Sound
Big, bold, and dynamic, the L100 Classic wears its heart on its sleeve. It’s also warm and slightly loose up and down the frequency spectrum. Those hoping for precision and control will be disappointed – delicacy and nuance aren’t this JBL’s strong points. If we want a rollicking good ride we’ve come to the right place, a statement that’s strangely as true for a classical quartet as it is for 70s Motown.

1970s cuts bring out the best in the L100 Classic. With Isaac Hayes’ Theme from Shaft as a starting point Roon radio took me on a ride – Marvin Gaye, Chic, The Temptations, EW&F and more – all played with the enthusiasm typical of the decade. Barry White’s lush thick baritone rounded the tour off, epitomising the L100 Classic sound: genuinely good fun.

As we can imagine, full-on orchestral music and rock also benefit from the JBL’s enthusiasm. But so does simpler music, the L100 Classic emphasising flow rather than detail. Maria Joao Pires’ left hand is subservient to the right one hand – the one that’s driving her Mozart Piano Sonata 1 forward. Other speakers tend to balance the left and right hand more. Similarly with Barrueco’s Köln Concert on guitar, the ‘improv’ section at 2’15” favours the upper strings leading things, rather than the supporting lower ones.

In both cases, the scale of Barrueco and Pires comes on writ large and driven with impact by the JBL. 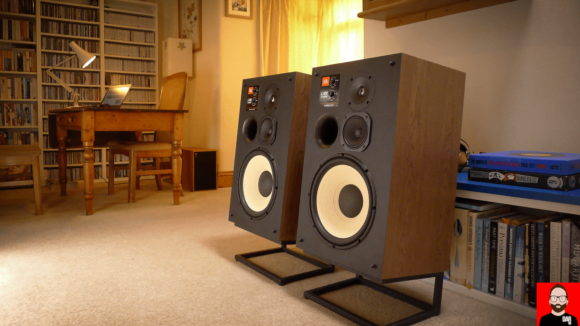 vs. Graham LS6 and Revel M126Be
Smaller speakers favouring control and clarity over forward momentum and heft, the LS6 and the M126Be are the ying to the JBL’s yang. Theirs are controlled voices, fine diction, every syllable enunciated, every detail captured. In comparison, the JBL offers a throaty roar – think Brian Blessed – that favours hearty ebullience over music’s finer points.

The Revels have surprisingly good dynamics but aren’t up to JBL’s standards. Less so the Grahams but with the LS6 we get a degree of warmth missing from the Revels. The JBLs round the sound out much further with greater ebullience and shove. Overall the two smaller speakers appeal to the head, the JBL to big fat juicy hearts.

vs. Klipsch Forte III
Same price, similar size with stands, both with a big sound – the Forte III and the L100 Classic satisfy our lust for heft. They are different speakers though, the JBL ploughing through music with swagger and a grin on its face, the Klipsch more earnest, grabbing your attention, not letting go.

Both the Klipsch and JBL offer dynamic as their strong suit. The most pronounced difference: the Forte III’s bass goes even lower than the L100 Classic and is tauter. Imaging is less precise with the JBL, which is mellifluous to the Klipsch’s precision, the latter highlighting everything, the former smoothing blemishes. Mostly. The JBL can come on as a tad strident if provoked enough. The impression of ‘live’ is also greater through the Forte III.

Overall, this listener’s preference falls to the Klipsch despite it being a love/hate relationship. Unlike the L100 Classic, which, if it fails to raise a smile or gain our affection, well then surely we have no heart. 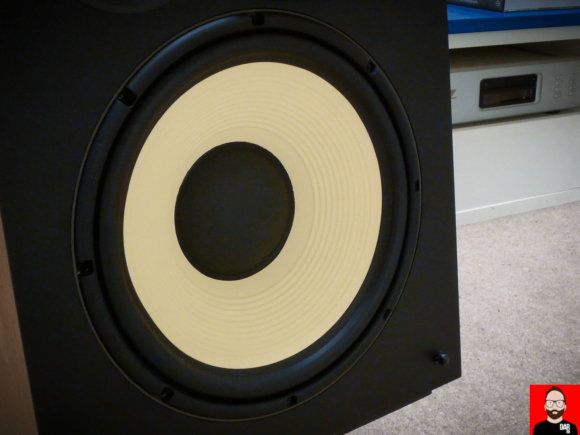 Wrap
The JBL is an easy speaker to listen to. Just relax into its big sound, we don’t need audiophile ears to appreciate its dynamic presentation. Just as well, it falls short on precise imaging, taut bass, and sweet treble. Everything’s slightly loose, a little wayward.

Witness the stark contrast with its stablemate, the Revel M126Be – the warmth of the big’un versus the crystalline focus of the standmount. Or with the ostensibly similar Klipsch Forte III that manages to drag a live feel out of studio recordings. The JBL is a more rounded, less demanding listen, but just as big.

All of which is observation rather than comment, no one sound occupying a top spot. To whit – a friend and I ranked the three speakers quite differently.

A retro appeal is central to JBL L100 Classic, something seemingly not lost on JBL’s engineers and their skilful update of the big ‘n warm 70s hi-fi sound. Non-audiophiles will love them – they’re genuinely impressive and they’re most definitely fun: a high-end loudspeaker for mainstream listeners (but I suspect quite a few die-hard audiophiles will also fall for their charms). 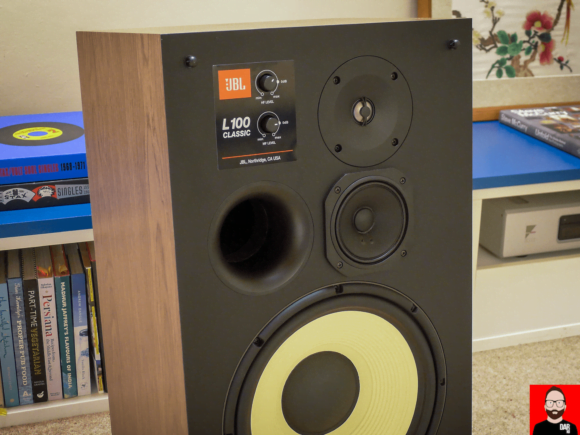 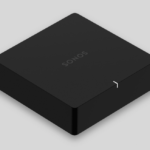 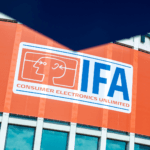