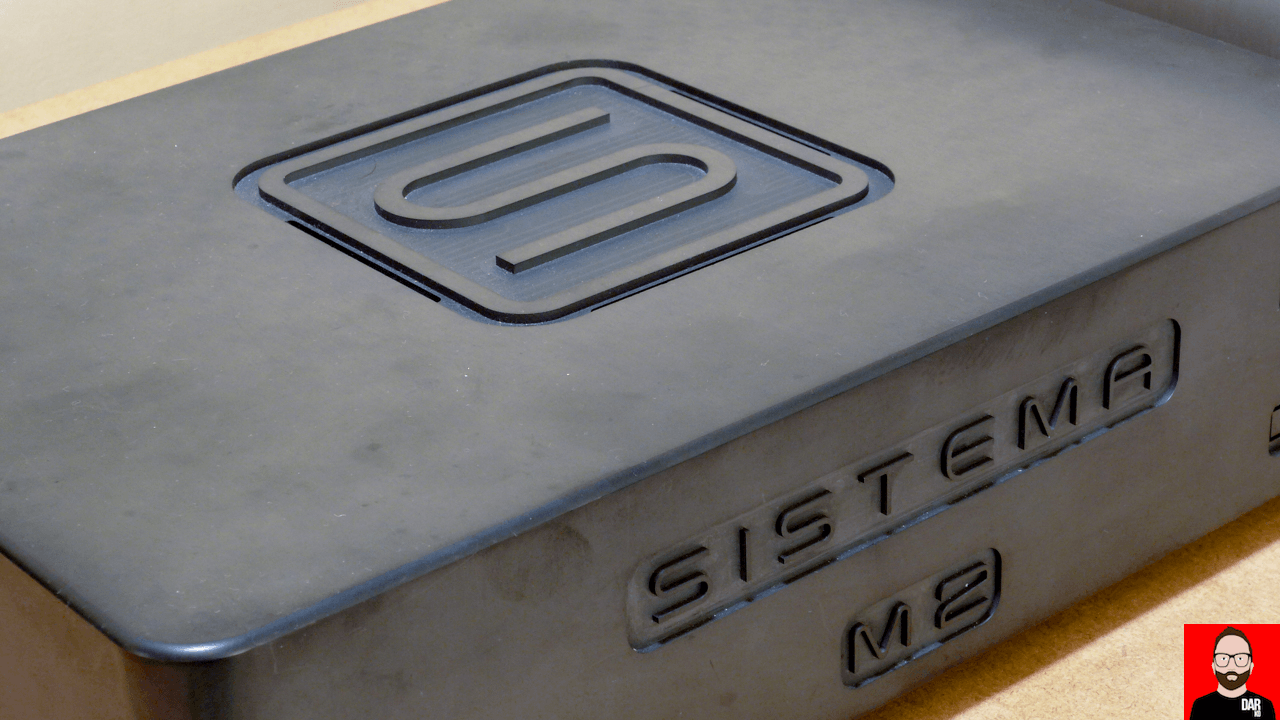 Sistema’s M2 is a dual-mono loudspeaker amplifier offering 85W per channel into 8Ω. Yours for €5000 plus taxes with optional 15-day money-back trial period. Sounds straightforward, doesn’t it? Not quite.

On inputs, there’s no analogue, just a single USB socket to play catch on PCM up to 384kHz and DSD64. No volume control or remote control either. Both are handed off to the connected PC/Mac’s software player. Think of the M2 as a digital-direct power amplifier.

Users must also provide their own 12-24V power supply to bring the M2 to life and there’s no on/off button on the unit itself.

The M2 doesn’t contain a conventional DAC. It works by amplifying the I2S signal’s voltage for a strong focus on signal purity and shorter signal paths. Yes, it’s digital, no it’s not Class D. And it’s only available directly from the Italian company’s headquarters. The production run is limited to 99 units. 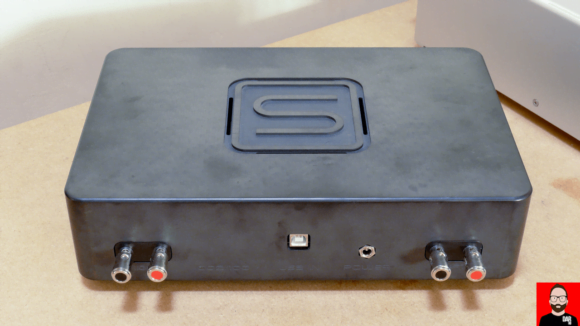 Facilities
Simple in extremis: a USB input and power socket plus four speaker terminals on the rear; on the front, a light to indicate the presence of HD material. That’s it – very neat. An optional Ethernet input has been mooted but no details were available at time of writing.

Sistema’s pressure-loaded speaker terminals are fiddly though, high quality or not. They accept only narrow bare wire to effectively bench my banana-plugged Tellurium Q. Further, the spring mechanism that holds the speaker wire in place is so strong that it (more than once) sliced the thin speaker cable provided by Sistema, thus requiring a fresh sheath strip. 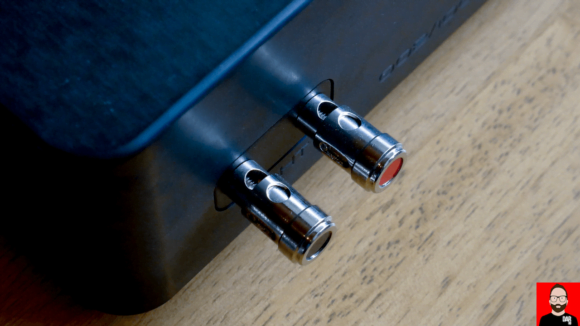 Looks and build
Continuing leftfield, the M2 has distinctive looks. To reduce noise and resonance, the casing is made from 2cm thick isostatic graphite – akin to pencil lead. Sistema makes a big thing of it — and rightly so. The M2 is a wonderful example of how fresh thinking can successfully be applied to the hi-fi hardware industrial design process. Think London’s Barbican Centre: polished concrete, harsh textures, unemotional, brutalist.

I love the M2’s style – its simplicity, its starkness, the ‘patina’ of fingerprints on the brooding grey finish, the large logo etched on top. At 300 x 200 x 80mm, the M2 is Kallax-Fi too.

Build quality appeared good even without any isostatic graphite references for comparison. The feet – also graphite – are sharp. Stefano’s warning that they might leave marks on their contact surface proved unfounded. I wouldn’t bother with the optional finish that negates it. 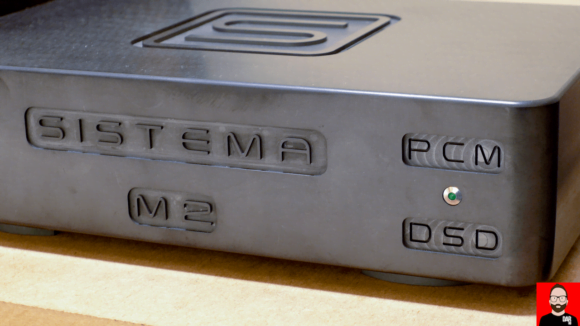 Music players
On software connections, things can get a little dicey. The M2 expects to see a digital audio stream come from Windows or MacOS. What might talk to that to the M2’s singular USB input? Time for some trial-and-error investigation.

Using my Windows 10 laptop as a Roon endpoint with Roon’s own volume control worked as expected. However, Sistema is not planning on adding Roon Tested certification.

The Pro-ject Stream Box S2 Ultra working as a Roon endpoint was a no-no. It would appear that music players bypassing the operating system’s own output/mixer appear do not work with the M2.

I then tried current versions of JRiver and Audirvana+ on a Windows laptop and couldn’t get volume control to budge from 100% — and I find that out the hard way. The next release of Audirvana+ will reportedly fix this but given the risk to one’s loudspeakers when things don’t go quite as expected, greater guidance from Sistema would be useful. No manual shipped with the unit and, at time of writing, there is no information about music players on their website.

It was only after some hair-raising moments that Sistema recommended VLC player, preferring its sound to that of Foobar.

Moving the Pro-Ject streamer into Volumio mode returned properly functional software volume control to the picture, giving me access to Tidal, Qobuz, NAS files and others. There was some noise though, both background and the occasional tick. Strange – the Stream Box S2 Utra is normally quiet as a mouse.

Tidal on both a Windows laptop (desktop app) and Chromebook (browser version) worked AOK – volume control and all.

All critical listening was therefore carried out on a Windows laptop using a combination of VLC and Tidal’s desktop app. Local music was copied to the laptop as per Sistema’s recommendation because VLC isn’t great at streaming from NAS drives. 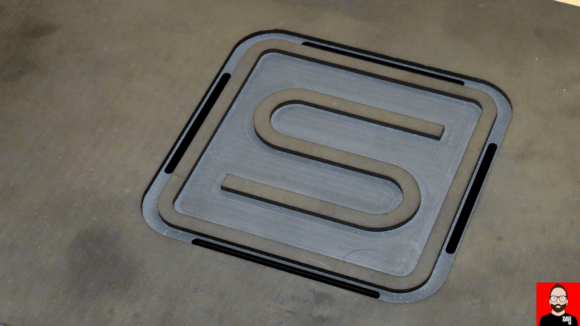 Operation
Once set up, the M2 runs very cool. Shielded speaker cables are recommended, and whilst it takes a 12-24V power supply Sistema suggest 20V max in practice.

Overall, ease of use is down to your music player, not the Sistema itself. I confess to never fully relaxing with software volume control, those earlier ‘full blast’ episodes playing on my mind. Oh — and remember to suppress your computer’s system sounds. Colour me nervous.

Accompanying cast
A Windows 10 laptop at one end and Graham LS6 speakers (£2,200) at the other. Admirably simple.
Ayre’s EX-8 amplifier (€7,990) stood around for comparisons. The €25/m speaker cables supplied by Sistema come from an unspecified Italian company.

The power supply was a 15-24V Monacor PSS-120NE (€80); a variable-output switch-mode unit that worked well when set to 20V. I heard no sonic difference from 15V to 20V but above that was noisy. A 12V SBooster linear supply (€329) was also brought into play. It improved things slightly – music flowed better and the separation of individual instruments was clearer, even in simple mixes. 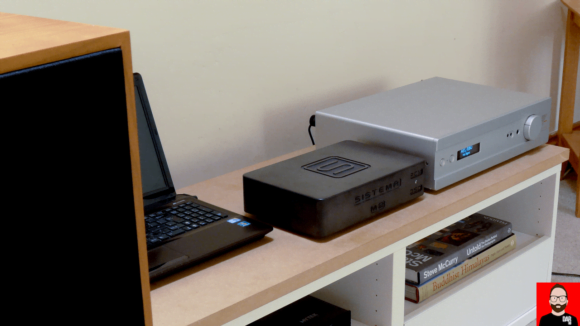 Sonics
Excellent transparency coupled with a cavernous acoustic – deep, wide, and tall – left the music to get on with it. Amplifier? What amplifier? I had musicians to keep me company. Close company. The M2 gives us a front row experience.

And with that transparency came detail aplenty, but not gratuitously so. Indeed nothing about the M2’s presentation drew attention to itself. Treble was extended when it needed to be, it wasn’t a defining characteristic though. Equally the LS6 reached a few Hz lower but it was the solidity and weight that impressed – think 14lb sledgehammer as opposed to 5lb lump. Tight too, not remotely vague, but bass was only there when the music demanded it. The midrange was also suitably discrete – in the positive sense – neither warm nor cool. Everything was just right.

With refined music like Norma Winstone’s Descansado the M2’s delicacy came to the fore, rendering each member of the trio in their own space and with gentle precision. Wind the wick and the pounding drums that thrust Metallica’s “Enter Sandman” into the room do so with cataclysmic force, the M2 persuading the LS6 speakers they can do metal after all. Classical is well served too, good recordings like Moscow Patriarchal Choir’s Hidden Music were conveyed with the majesty of the venue and the passion of the Orthodox singers. 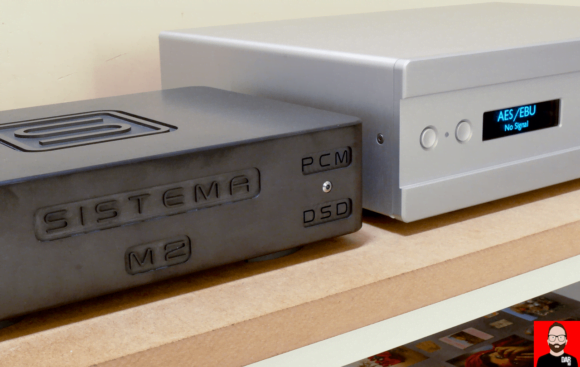 The M2’s sonic abilities were highlighted further after I switched back to the Ayre EX-8. Good as it is – and it is good – the Sistema trumps it in almost every audible respect.

The M2 was more precise but gently so, without any artificial etching of detail (like TV stores that turn up the contrast to entice consumers). Decidedly more weight behind those Metallica drums too, and Norma Winstone was more palpable through the M2, the acoustic slightly wider and taller. Ultimately a more distinct and credible sonic picture was presented by the M2 – impressive given the EX-8’s credentials.

Conclusions
The M2 frustrates and it delights.

It is small and it reduces box count. That’s good news, squared. More importantly, it sounds utterly superb. With the usual caveats – my kit, my room, my preferences – it provided the best sound I’ve heard to date. If that were the sole criteria for review assessment, I’d call it a steal, even at €5000.

It’s the effort that it takes to get there that will limit the M2’s appeal. Only Macs and PCs running the right software need apply. Network streamers may work (but they may not) and it’s left to the end user to find out for him/herself. The M2 narrows speaker cable terminations to bare wire and we have to BYO our own switch-mode power supply.

Sistema’s M2 is a niche product. It’s not for everyone but for the right kind of listener, considerable joy awaits. 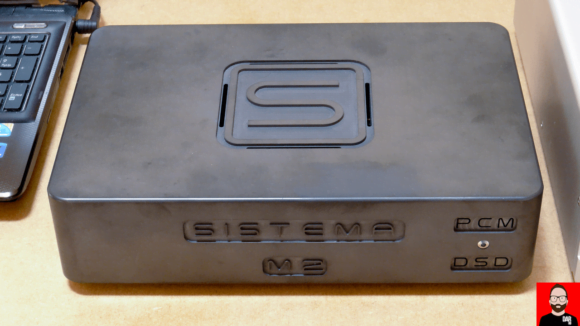 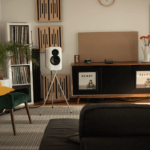 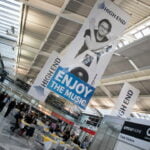