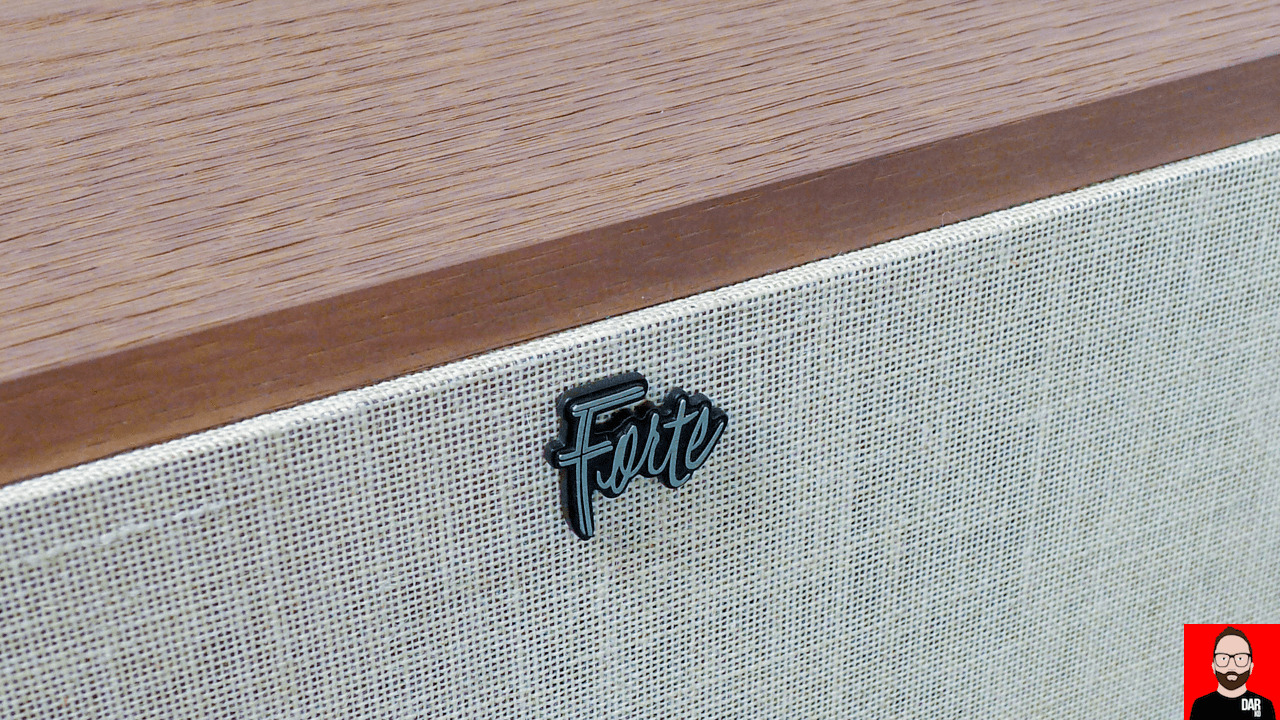 Baby of the Heritage range, the Klipsch Heresy III’s sojourn at my home (review here) was mildly infuriating at times. Its unevenness disqualified it from the Do-No-Harm club and the sound of a piano never quite gelled. It got its hooks into me big time though with its uncanny ability to conjure a live event out of a studio recording.

Serious fun, more, please. Which brings us to Klipsch’s Forte III (£4k / €4.4k / $4k). A chance to see what moving one step higher up the ladder brings forth. Quite a lot as it turns out.

Hey good lookin’
You only have to look at it to know the Forte III is an altogether different proposition to the Heresy III. At 91x42x33cm (HWD), it is larger, laying down an imposing physical in-room presence even though it’s not silly-big by audiophile standards. At 33 kg it’s also luggable.

And yet, visually, the Forte III blended well into my smallish room thanks partly to the pair’s Distressed Oak finish and Lambswool grilles. Walnut, cherry, and black ash finishes are also available, all with black grilles (Lambswool on request), all more traditional in their appearance.

That the Forte III is a) a shallow speaker and b) intended to work close to the wall helped with the room blend. Some furniture had to be moved but the end result was more free floor space than with my usual standmounts.

An exemplary case of retro chic, the bigger Klipsch looked fabulous, even if the rest of my decor did lend a decided ‘beige city’ vibe. 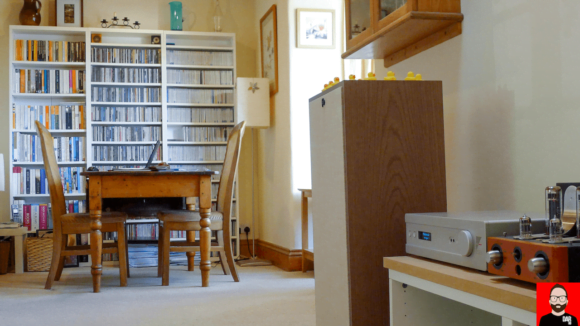 No way Jose
Experimentation is needed in positioning the Forte III – more so than usual. We need to optimise the balance between direct and front-wall-reflected bass from that rear passive radiator. The manual recommends a 2-10″ air gap behind the speaker. Before you even finish reading, a heavy dose of cognitive dissonance kicks in as you eye-up the implausibly small gap between the loudspeaker and the front wall and the huge cone that’s about to pressurise it.

And yet it works well, even at 2″, producing plausibly controlled bass. I played with more positions including well beyond the maximum 10”, eventually settling on 8″ from the front wall. My tall ceiling – 4.7m at the apex – no doubt influenced the outcome, your room will be different.

Toe-in also affects treble, too direct and it dominates proceedings. I had the Forte IIIs firing straight ahead. 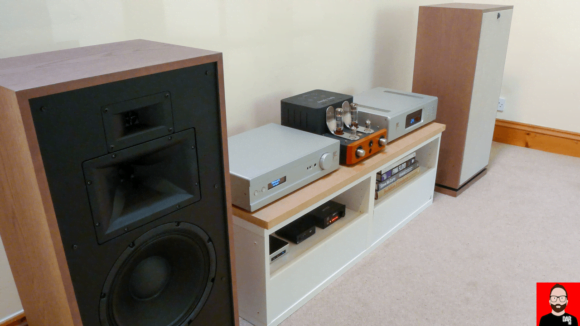 Amplifier duties were split between the tubed-up Unison Research Simply Italy (£2,000) – previously used for the Heresy III review – and a solid-state Ayre EX-8 (£5,750 as amp only). Given the Heresy III didn’t get on with my solid-state Ayre AX-7e ($3,950), I also plumbed that in for a listen as if to beg lightning to strike twice. On speaker cables, Tellurium Q Black 2 (£270).

Convincing sound
The Forte III shares the Heresy III’s sonic signature by building on its strengths and clearing up most of its shortcomings. It’s an altogether more refined listen. Not perfect, like the Heresy III, it demands your attention. But turn the volume up – the Forte III positively encourages it – or play a poor recording and the sound can sometimes harden.

It’s an occasional price worth paying though. The Forte III’s innate live feel gets you closer to the musicians than traditional speakers. Indeed, that live feel is Klipsch’s key characteristic, aided in no small part by their big and easy flair with dynamic swing.

The low-end revived memories of my B&W 802 speakers that were, if memory serves, even bigger than the Forte III. Given their size, people used to ask where the bass was…until real bass presented in the music; then they stopped asking.

The Forte III pulls off the same trick, saving the firepower until a Kangding Ray, Grace Jones, or Berlin Philharmonic on Rite of Spring walk through the door. Then the thunder claps! My Graham LS6 go remarkably low for a standmount but the Forte III tramples them on low-end reach and wallop. Witness Metallica’s Enter Sandman, a riot of bombast that had me pinned to the couch via the Klipsch. 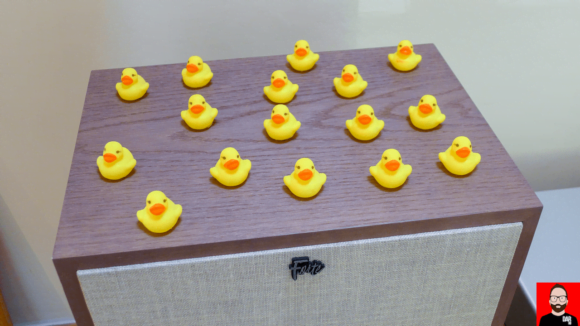 The close-to-wall positioning compromises soundstage depth. A little, not a lot. That’s to be expected – but it does nothing to detract from a more convincing portrayal of real musicians in real spaces, as exemplified by the combination of choir, orchestra, organ, and sympathetic recording engineers on Durufle’s Complete Choral Works (Signum Classics): absolutely stunning through the Forte III. The organ bass creeps into every nook and cranny as the vocals float around the cathedral’s pillars.

Smaller-scale music fares equally well. Rodney Crowell’s It Ain’t Over Yet put us virtually in amongst Crowell, John Paul White and Rosanne Cash. Similarly, with Sheku Kanneh-Mason’s version of Hallelujah that showcases the Forte III’s midrange: more direct than sweet, it lends listeners a ‘you-are-there’ feeling.

Adding to this live feel is the Forte III’s detail delivery, which is impressive but a means to an end, not an end in itself. More than once I did a double-take as a snare or a cymbal attacked, the realism surprising me throughout the review period, even at the very end.

Overall the tonal balance is somewhat tipped up – the Graham LS6 certainly present a warmer sound – but the Forte III’s ability to grab my attention and not let go far outweighed any tendency to sound sparse. 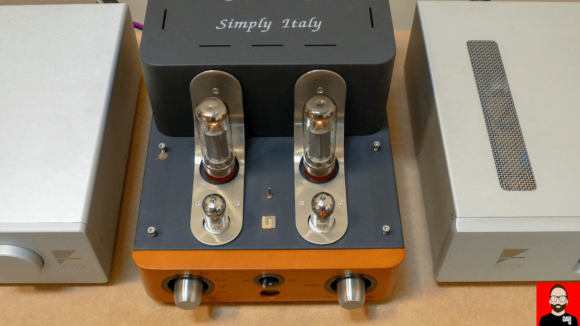 Valves vs solid-state
The smaller Heresy III had a preference for the 12W Unison Research Simply Italy valve amp. In stark contrast, the solid-state 65W Ayre AX-7e sounded unacceptably flat and was yellow-carded for that review.

Not so with the Forte III. Whilst they too flourished with the Simply Italy at the helm, they also liked both the Ayre EX-8 and AX-7e. The former came on as more precise, more ordered, the latter looser around the edges but with a better sense of musical flow.

Bottom line – we have myriad possibilities with the Forte III: they positively encourage experimentation, both with positioning and amplifier matching. I could see myself ploughing through a whole roster of electronics in search of the chosen one. That makes them a big hit for anyone wanting an audiophile journey before arriving at a destination.

Conclusions
The Forte III may be fashionably retro but there’s nothing remotely old-fashioned about the sound. This is a seriously good speaker, repeating the Heresy III’s trick of making everything sound more live but in a far more sophisticated way; the impressive bass is but one part of a fresher arsenal. In short, the Forte III is less of a maverick and closer to a normal hi-fi speaker (whatever that is) than the Heresy III without betraying Klipsch’s more leftfield leanings.

If the Klipsch sound appeals and you can accommodate the Forte III physically, it’s also a significantly better bang-for-buck offering than the Heresy III. We get an awful lot for the asking price — full stop / period / punkt. The Forte III is a big and beautiful loudspeaker, both visually and sonically, presenting music in a way that’s utterly enthralling. 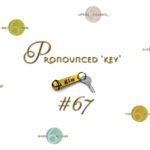 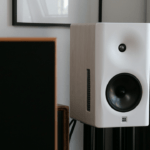