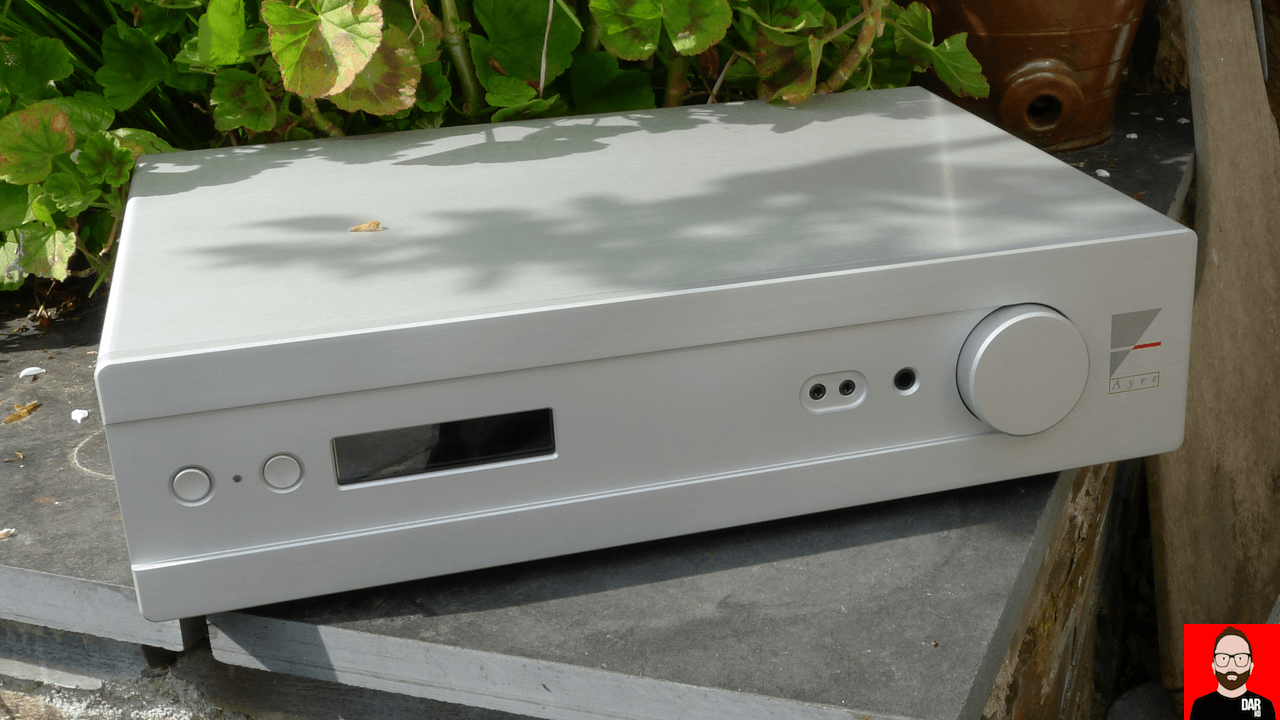 One-boxers seem to be catching. Look at Naim, Linn, NAD and Devialet et al. The main attraction of a streaming amplifier is system simplicity – just add speakers. A single box introduces us to an aesthetic calm where both space (and the patience of significant others) is often at a premium. Music is streamed from a NAS device or a cloud service (Tidal, Qobuz, Spotify etc.).

Separates enthusiasts highlight (valid) compromises – RFI and shared power supplies – whilst playing down the audible potential of shorter signal paths or the manufacturer retaining voicing control over a complete chain of electronics: streamer, DAC, amplifier. Separates multiply the casework cost — money that could be spent on better engineering.

Lego-Fi
Ayre Acoustics’ EX-8 puts a network card, digital & analogue inputs and amplifier in a single case. Don’t need / can’t afford everything? Ayre has you covered. The EX-8 is modular. Pricing is straightforward: 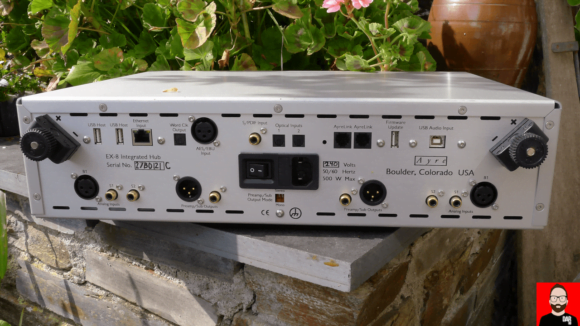 The building blocks
The EX-8’s amplifier section borrows the Equilock Gain Stage and Diamond Output Stage from Ayre’s 5 Series and R Series. The DAC uses an ESS9038Q2M chip. Network streaming comes by way of ConversDigital’s board. Meanwhile, the headphone amp provides both 2V single-ended and 4V balanced outputs. The loudspeaker binding posts put 100W into 8Ω, sufficient to drive neighbours to distraction with high-efficiency loudspeaker but with my 87dB Graham Audio LS6, it closes in on the top of its range with quieter recordings.
Analogue inputs comprise 2 x single-ended and 1 x balanced. For pre-amp outputs, we note one each of single-ended and balanced, added to which a mono/stereo switch eases subwoofer connection.

The DAC module’s 2 x TOSLINK, 1 x coaxial and AES/EBU all handle 24bit/192kHz PCM or DSD64 via DoP. The network card covers the same rates – wired or wireless. USB ups the ante to 24bit/384kHz and DSD128 DoP. MQA is notable by its absence. Mid-table in the DAC specifications league but far more important is how well Ayre has implemented things, a word clock output indicative of the care taken.

The ConversDigital network card – identifiable by the MConnect app – is seen often in high-end streamers. And like DAC chips, it’s the board’s implementation that counts. We judge by listening, not by assumption. MConnect gives us direct play of Deezer, Tidal, Qobuz and Spotify, plus music from OneDrive or Dropbox and local files on the network via UPNP / DLNA (hello Audirvana, JRiver et al). ConversDigital’s solution also plays music from USB thumb drives plugged into the unit’s two rear USB sockets, one of which is reserved for the WiFi aerial.

Most of my listening was done with the EX-8 in Roon Ready mode. I ran wired Ethernet most of the time. Wi-Fi worked nicely as well, although my router is close by and has a line of sight to the hi-fi bench so not the stiffest test.

Looks / build
Entry level or not, the EX-8’s looks aren’t quite commensurate with its price tag, stepping over the line from discrete and into anonymous, where Plain Jane and Jim live. The simplicity of a large volume knob, two push buttons and a pair of headphone sockets makes for an admirably clean fascia. A little more style wouldn’t go amiss.

That’s in silver. Black redresses the balance with a slight sense of aesthetic menace. Better. In both cases, using Ayre’s myrtle blocks underneath the EX-8 enhances the unit’s visual standing (but I didn’t test their sonic amelioration). The increased underside clearance is also useful as the EX-8 runs hot and vents through the bottom of the casing. 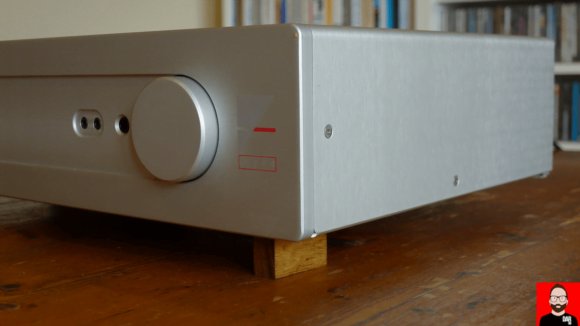 Operation
Using the EX-8 is a breeze – as easy as it gets if you hide unused inputs – aided by the EX-8 automatically switching to the network input upon the press of play. Useful.

The MConnect control app is fine, if not up to Roon’s sky-high UX standard. It’s more than passable with Tidal though (and presumably also with the other streaming services). A shame vTuner Internet Radio isn’t enabled on the EX-8. The ability to control volume from the app is a welcome bonus, particularly as the EX-8’s physical remote control is a mite plasticky and fiddly. Controlling volume in MConnect works but, unlike Roon, doesn’t mitigate clumsy fingers inadvertently jumping the volume.

In both apps, smartphone/tablet activity sends the physical volume knob spinning. Fun to watch everything happening in the analogue domain – a numerical readout is the only tweak I’d suggest.

The EX-8’s versatility is a key calling card and the option to control it in different ways is welcome.

False start
A quick word about playing music from a USB stick inserted into the Ayre’s rear. I noted a small but noticeable uptick in performance when the Pro-ject’s Stream Box S2 Ultra was used this way. Allegedly, this is also the case with dCS’s Bridge – I hope to test that soon. No such luck with the EX-8, I found no difference between a direct-connected USB stick as a source and the same track played via Roon via the network input. 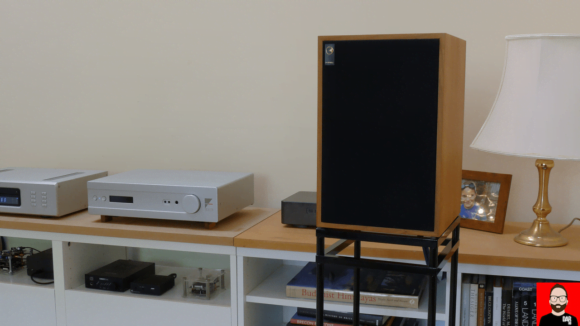 Sound
To the EX-8’s overall sonic character, I would ascribe one word: clean. The sound of the ECM record label distilled into an amplifier. Music through the EX-8 plays to the head primarily but also reaches out to the heart.

Pristine, well defined, transparent. Those preferring a sweet or euphonic sound might look elsewhere. Those who revel in understanding every performer’s role should apply here – a light illuminates the soundstage, everything is audible and there are no dark corners. It does NOT tip over into relentless, soulless or clinical. A mistake similarly-voiced equipment can make. The EX-8 just presents a less filtered view of the world.

Take the second track from the Tord Gustavsen Trio’s The Other Side on ECM. All atmospheric, instruments well placed, delineated from each other. Hole’s double bass taught, his breathing clear thanks to an extended treble, as is Vespestad’s delicate cymbal work. Gustavsen’s piano pushed to the fore (versus the AX-7e) when it comes in, emphasising its lead role.

The EX-8 doesn’t do dark quite as well as some. Leonard Cohen’s final offering You Want It Darker – as black a piece as any – loses a little gravitas through the EX-8 compared to the AX-7e (and Sistema M2 – review soon). Similarly Currentzis’ Tchaikovsky 6. In both cases, we look in on the despair – observing – rather than letting it completely envelop us. 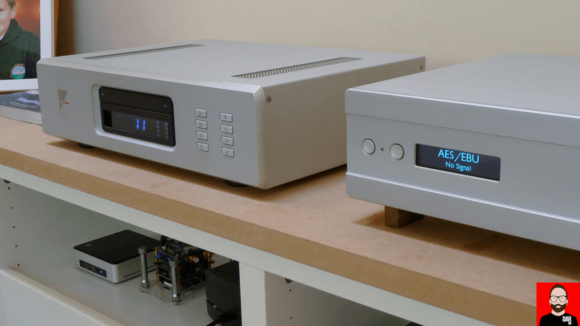 Ayre AX-7e comparisons
Both amplifiers have a common lineage but the EX-8 and AX-7e don’t sound the same. The former is more focused, the latter more relaxed. The EX-8’s treble is more extended, which manifests itself in a greater sense of detail awareness, greater performer definition and more air bite. Brass rasps brassily. The lower end is also tighter, even if its extension is similar to the AX-7e.

Conversely, the AX-7e fleshes out the sound to come on as richer and focused more on the midrange than the frequency extremes, both of which are softer than the EX-8. The difference is akin to switching between high and low damping on GoldNote’s IS-1000 streaming amplifier, low (25) more valve-y, high (250) more solid state and exerting greater control. The effect is subtle with the IS-1000, more pronounced with this pair of Ayre.

From the EX-8, these ears missed some of the AX-7e’s palpability. Yet overall, as an amplifier, I’d say the EX-8 is the better of the two. My preferences don’t matter per se, I offer the insight to show how the EX-8 might show unexpected appeal, especially to those for whom its sonic signature might not make it an obvious candidate at first blush. Such is the insight afforded by the extended A/B testing of a home-based review.

Digital electronics
It’s counterintuitive to use an external streamer / DAC with the EX-8, but individually both the Pro-ject Stream Box S2 Ultra and Mytek Liberty / SBooster units bested the Ayre’s internal circuits. The (small) improvements being in greater transparency as well as a more palpable sound, the latter a nod towards the AX-7e.

These differences don’t usurp the EX-8’s proposition as a one-box success story but show us possible upgrade paths. Even Ayre themselves conceded the extra filtering in the Stream Box S2 Ultra might well be beneficial. For me, hanging separates from the back of the EX-8 is to miss its point. The Ayre unit’s raison d’etre is reduced box count. 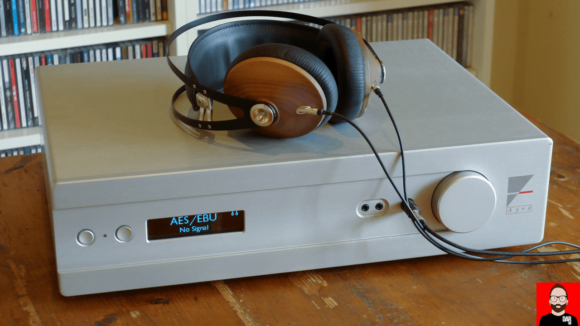 Canned pleasure
Meze’s 99 Classics were used to compare the EX-8’s headphone output to the Mytek Liberty’s, noting that the latter’s slightly better DAC should have tipped things in its favour. Not a bit of it. The EX-8 tamed the slightly over-ripe bass of the Mezes to reveal more detail top to bottom. The Mytek Liberty sounded more homogenous in its overall presentation and less easy to follow.

Swapping the Mytek for Arcam’s rHead & 12V SBooster supply negated the DAC variable. Same result though – the clarity of the EX-8 and its control over the Meze’s lower end won through. Commendable – at £700, the Arcam / SBooster combo digs deep into our wallets.

I didn’t have suitable cables to test the balanced output. Indeed, head-fi folks should investigate the EX-8 given the positive results achieved with mid-range Meze. The headphone output here is a long way from an afterthought.

Conclusion
Ayre has positioned the EX-8 as a hi-fi enthusiast’s one-boxer, its streaming flexibility connecting with the majority of use cases. Without third-party intervention, Bluetooth, Airplay and Chromecast are excluded. That’s observation, not an unfavourable judgement. The EX-8’s modular nature means Ayre can address these as and when they see fit and/or offer an upgraded DAC board as chip tech develops.

Ultimately, the EX-8 sits comfortably in the audiophile world and does so with a minimal footprint. It’s not inexpensive, particularly outside the USA, but it’s a well-rounded package: a single unit that switches listener focus away from the equipment and toward the music — an ideal fit for any Music-First Audiophile. 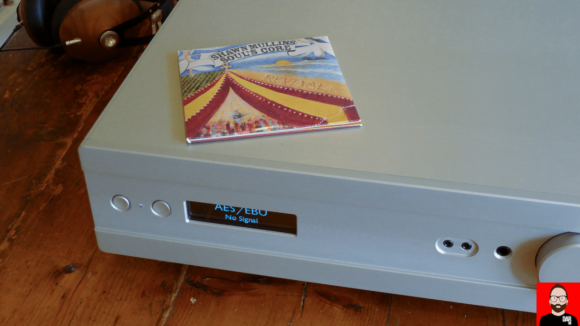 Postscript
A pair of Klipsch Forte speakers arrived for review whilst the ink was drying on this article. Things are still at first impressions stage. They are, however, making rather nice noises on the end of the EX-8, its control seemingly complementing the Forte’s natural enthusiasm. I’ll report further in the Forte review. 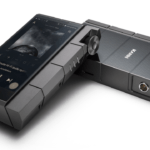 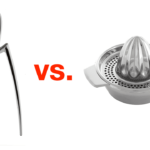