Tales of the unexpected. The inconvenient truth about vinyl isn’t that “it sucks” – it doesn’t. Try saying “digital sucks” and you’ll hear nothing but the sound of dismissive idealism. Pragmatism tells us that some turntables sound better than others. Many turntables sound incredible, other less so. Just like DACs and streamers. Many DAC/streamer combos sound incredible, other less so.

However, digital audio doesn’t enjoy vinyl’s endlessly positive mainstream coverage. Coverage that often spills into hyperbole to put entry-level turntable disappointment a credit card swipe away. Not with the playback ritual, the cover art or a record’s tangibility – qualities that show up with ALL turntables – but sound quality.

Anyone buying a sub-thousand dollar turntable and hooking it into a sufficiently resolving hi-fi system, might, as I do, see a disconnect between claims of audio nirvana espoused by vinyl enthusiasts and/or the mainstream press and the audible reality of, say, a Rega Planar 1 or Pro-Ject Debut Carbon. However, to actually call out this discrepancy is to deviate from the script that “nothing sounds quite like vinyl”.

Side note #1: To see how silly that sounds, try saying “nothing sounds quite like digital”. 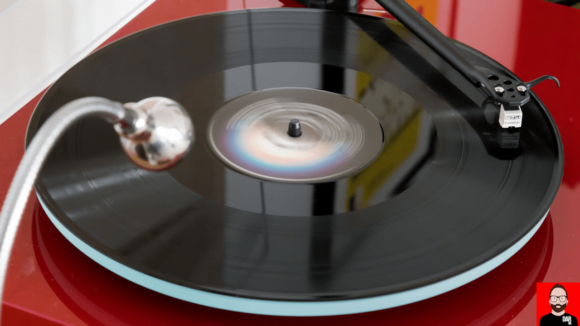 Over the past few years, I’ve found the sound quality of a Pro-Ject Debut Carbon, a Pioneer PLX-500 and a Rega RP1 to come up short on similarly-priced DAC/streamers. Wrapping my thoughts around that Rega caused this site’s (then active) comments section to go into meltdown, obliging me to front-load the post with a dumbed-down summary lest readers skimming the surface miss the important points. The needledrops that substantiated my findings are long-gone but the TL;DR is not:

“The mainstream press raves endlessly about the warmth and richness of vinyl. The implication is that vinyl sounds better than any digital format at every level, even the entry level. The mainstream buyer reads this and says, “Hey, I need to get me some of this!”. He scopes out a new turntable at the entry level and pushes his budget to the absolute maximum and buys an RP1. Audio nirvana is just around the corner? Except it isn’t. With record after record, the RP1 sounds rolled off in the top end, lacks separation and overall resolution, even when compared to a 320kbps Spotify stream, thus eroding the benefits of hearing a slightly different master (should the vinyl be pressed from one).”

“Don’t just take my word for it, have a listen for yourself. These RP1 needle-drops were augmented by the same two slabs of wax digitised by a KORG ADC and a second Rega: a P3/24.”

“Neither does entry-level turntablism hold a candle to higher-end vinyl rigs. This matters not a jot to those in it for the ritual, the collecting and the tangibility. Judged purely from a sonic perspective, buying a budget vinyl setup – like a Rega RP1 or a Pro-Ject Debut Carbon – is loaded with the very real risk of disappointment.”

“An inconvenient truth because 1) this isn’t what the mainstream (read: non-audiophile) press, per the above quotes, wants us to believe and 2) because of the furious debate it will no doubt generate among those who mistake my conclusion – that ‘entry-level turntable sound quality is disappointing’ -for ‘digital sounds better than vinyl’.

Side note #2: 2017’s Inconvenient Truth about Bluetooth Audio came and went without complaint or objection.

In 2018, I purchased a Rega Planar 2 (€519). Why? because I love collecting records and I love the ritual of playing records. The Planar 2’s gloss red finish would be a five-star fit for the Racing Red KEF LS50 – aesthetics are the main reason it would supplant a Technics SL-1200G. Also, an opportunity to dig in once again into entry-level turntablism.

The Planar 2 is not Rega’s entry-level turntable but one step up from the Planar 1. Its sound quality when paired with the twice costly PS Audio NuWave Phono Converter failed to impress. I suggested as much in the episode of 2018’s room tour series:

A steady stream of viewer comments skirted a victim-blaming theme: that I didn’t hear heavenly choirs from the Planar 2 was my fault, not Rega’s.

1. “You’re using the wrong cartridge”. (I know it’s not great but the Carbon is chosen by Rega, factory-fitted by Rega and represents the average Planar 2 experience).

2. “You’ve set up the cartridge incorrectly”. (Nope. Screwing on a counterweight and verifying the tracking force with not one but two different sets of scales I can do all by myself. Ditto levelling the turntable with a spirit level. A turntable-expert friend provided third and fourth checks).

3. “You’re playing the wrong records”. (Tell me again where I find pre-1990s pressings of The Hold Steady, Foals and Arcade Fire).

4. “You have to clean your records”. (I do. With a Pro-Ject VC-S vacuum RCM. The audible results speak for themselves).

5. “You’ve got the wrong turntable”. (Ah – so you admit that not all turntables sound great?)

Side note #3: only when pressed do we learn that often the most vocal defenders of entry-level turntables are using anything but. Not that I’m unsympathetic to their position: hearing that digital audio is no longer the weakest link in hi-fi after a lifetime of vinyl commitment (read: spending) – and that streaming services give us a month’s access to millions of titles for the price of just one vinyl album – that must really burn.

Modern ADCs mean this site’s readers don’t simply have to take my word for it when it comes to this Rega turntable’s audible compromises. With the PS Audio NuWave Phono Converter (US$999) pressed back into service to join the dots between the Planar 2 and the Kii Three actives, the Planar’s output could be digitised, a 24bit/96kHz file created and a second reader poll created.

The PS Audio box had already told us that ADC digitisation proved no barrier to readers audibly separating two different pressings/masters of the same Bowie LP.

Rather than invite readers to compare the Planar needledrop to a direct-streamed equivalent, I pulled on the PS Audio’s line-level input to capture the analogue output of a Bluesound Node 2 (€549) to create the second 24bit/96kHz file. Readers voted blind on what they heard.

The results landed as follows. This isn’t what I heard but what some of you heard.

Only now am I revealing the identity of both rips. File 1 is the Planar 2 with factory-fitted Carbon pick-up. File 2 is the Bluesound Node 2 playing a Tidal stream. The sting (for some) in this tale is that the Tidal stream parsed by the Node 2 wasn’t Redbook but (24bit/96kHz) MQA!

For every 2 people preferring the sound of the Rega rip, 5 gave the Bluesound 2 the nod. Also interesting: the number of people who couldn’t pick a favourite equalled those whose preferred the vinyl front end. Looked at a different way, a clear preference for the Rega was nowhere to be found.

This tells us that it’s bedtime for the idea that all vinyl front-ends better the sound quality of all streaming sources. Time to put to sleep the silly notion that “nothing beats the sound of vinyl” because it’s simply not true. Not always. And not at the entry-level.

What is true is that pragmatism is always preferable to idealism.