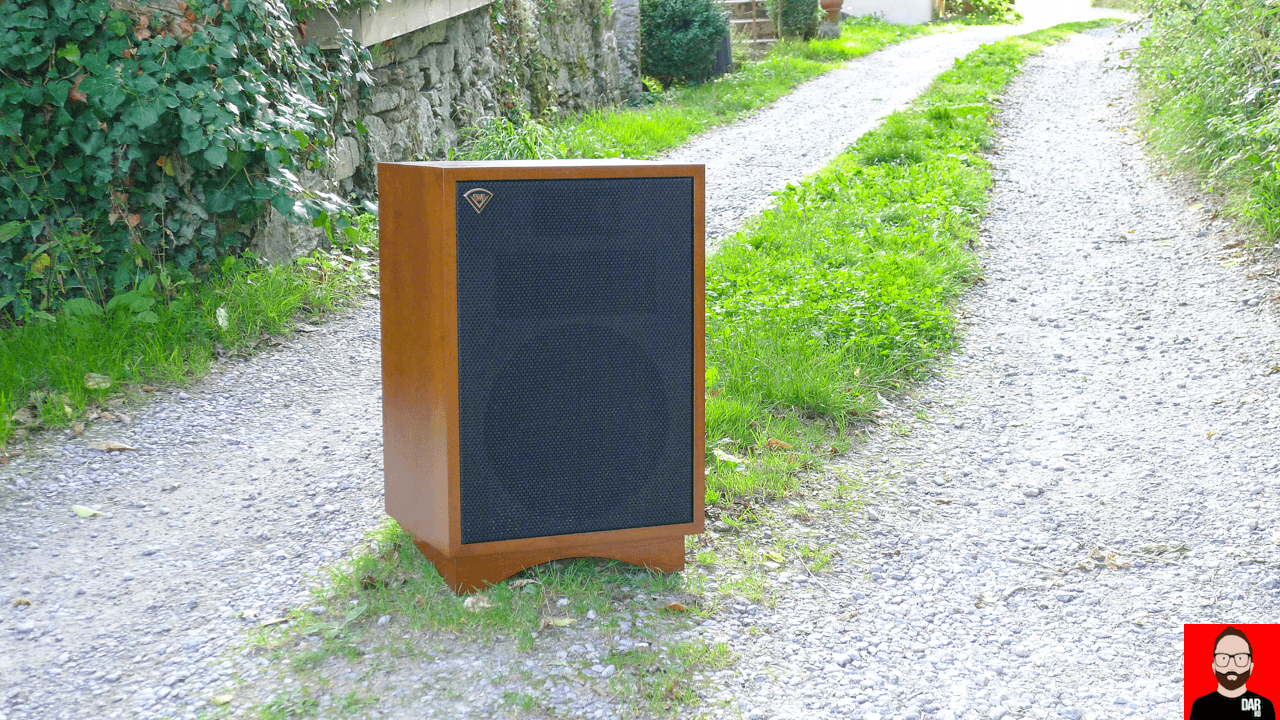 Heresy: “Opinion profoundly at odds with what is generally accepted”.

Klipsch got that right. The Heresy III are not your average floorstanders, in looks or in sound. Short and squat in stature, two well-tailored Ewoks ready to do your bidding. Technology – horn-loaded drivers – from a bygone era. Specs that underwhelm (-4dB at 58 Hz?!). And, dare I say it, a sound that falls short 10% of the time.

Game over? Heck no. Because when they get it right – 90% of the time – they present an alternative take that’s very compelling. Think live show. Think full orchestra or Bruce Springsteen in your lounge. Or acoustic duo – they’re not limited by genre or scale. Refined, warm, comforting they are not. Communicative they most definitely are. And that bass spec is very misleading, they’re honed-from-granite solid when needed.

So if you drive a BMW but hanker after an Alfa, secretly side with Darth Vader or just want an alternative to the usual suspects, read on.

In the flesh, the Heresy III resemble smart feedback monitors. Nicely finished in black, walnut, or cherry-covered MDF, my only gripe is that the rear panel isn’t veneered. Overall though, with beautiful vintage-look grills, the Heresy III look every inch a £2,500 speaker.

Their height – 24” – is a defining feature. Neat’s Iota Alphas plough a similar furrow and were groundbreaking when introduced 2-3 years ago. Klipsch beat them to it. By 59 years. After all, the Heresy III are from Klipsch’s Heritage range. They are bulkier than the Neats, with 15” width & 13” depth adding visual weight to their listening room image.

A ‘wedge’ tilts them to get the soundstage at the right height. Listening 8ft away, it was still slightly low. 10ft would have sorted it but not possible for me. Two books under the front rectified things and – shock horror – the sound was just as good as without them. 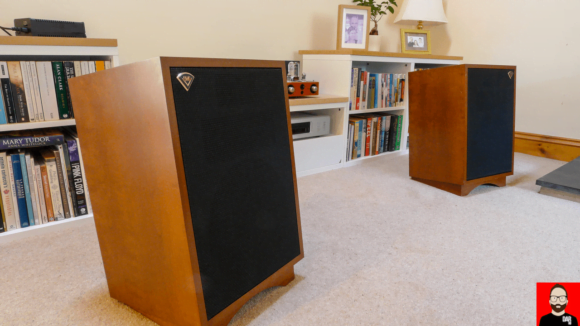 Simon Powell of UK distributor Henley Audio advised experimenting with the position as the treble is directional. I started where my Harbeth C7/2s usually sit. Despite much faffing, they ended up back there – 6ft apart, with the drivers 2.5ft from the bookcases behind them. Angled in slightly more than usual though, the drivers almost facing me. Playing with the toe-in affected both image width and bass control. It’s worth a bit of effort to get it right.

I did try them close to a rear wall. Slightly looser bass. But not much. Together with their low profile, the Heresy III should fit well into modern rooms.

Unusually the small Klipsch are 3-ways – a 12” woofer, 1.75” midrange driver and 1” tweeter. The latter two are horn-loaded compression drivers – not very common these days and a big part of the alternative sound. Round the back sit bi-wire terminals. I ran them single wired.

The Simply Italy proved a more copacetic match than my Ayre AX-7e — and this amp looks gorgeous. This integrated only kicks out 12W but the Heresy III went plenty loud thanks to their 99dB sensitivity. They also stayed in character between solid state Ayre and tubular Unison Research, unlike my Harbeths.

And that’s it. Small, well-finished, easy to drive, easily accommodated floorstanders. Simples. Describing their sound is a more challenging task.

I’m used to adjusting to different sonic signatures – audio nirvana comes in many forms. It has never taken two weeks though. Nor do I usually flip-flop along the way. Even when I got there, certain things continued to bug me (that 10%). 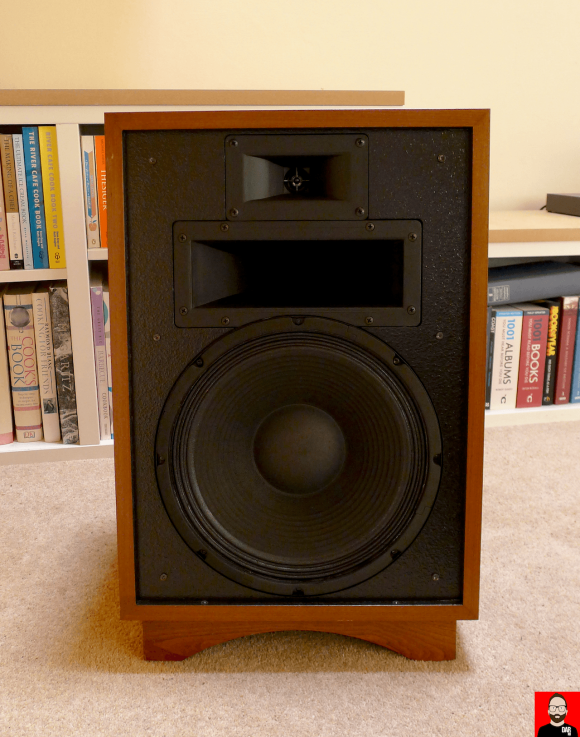 I’ve reverted to the Harbeths now. Very familiar, still very nice indeed. They’re not the Heresy III though. The immediacy is missing, the directness. Chinks have appeared in the Harbeth armour. That surprised me.

So what sort of sound caused this reaction? A sound where the whole is decidedly more than the sum of its parts.

Bass is strong – double espresso strong – and feels deep. The Harbeths go lower but we just don’t feel that as much. The Klipschs absolutely monster Lorde’s Royals. Ditto the Budapest FO with Ivan Fischer playing Mahler 2 at full tilt. Both make it harder to believe the Heresy III sit 4dB down at 58Hz.

Midrange and treble are direct, there’s no attempt to gild the truth. Forget rich, sweet, refined, warm. The treble can also sound coarse or hard at times, very occasionally sibilant. Only on individual recordings, it’s not genre specific. Annoying when it happens though. Never before has Maria Joao Pires sounded quite so harsh.

Given this treble intensity, detail retrieval – or the illusion thereof – is good. Yes, new things were pulled from familiar albums. Musical aspects are emphasised though, not just sounds we haven’t heard before. The subtle interplay between musicians is more apparent on Hans Theessink and Terry Evan’s Visions for example. Nice

On dynamics, the Heresy III are extremely strong, tracking big swings as easily as smaller ticks. A quality that contributes to these loudspeakers’ live feel.

Which is more truthful? Which communicates that truth with greater potency? It’s your preference. In audio terms, the Heresy III argue strongly for ‘de-beautifying’ music’. Music without makeup.

Not convinced? Think of your last gig. Was the imaging good? (no). Was the bass controlled and extended? (no). Was the sound balanced (after adjustment)? Was the volume appropriate (no, loud)? Was it a good gig? (Hell yeah!).

A Barb Jungr concert sticks to my mind. Small intimate venue, far too hot a sound, but boy does she do Bob Dylan like no other. It Ain’t You Babe – delicate, poignant, soul-emptying. Sound quality – poor. Musical impact – hallelujah.

Her recording of the same show is good but proved underwhelming when hearing it on my Harbeths that same night. Months later, I try again though the Klipsch and find myself transported back to the show.

So where does that leave us?

The Heresy III do the audiophile well; a quality I may have so far sold short. But they do something more: in giving us the unvarnished truth they engage the heart first, the head second.

They’re not comfortable speakers. They force you to listen. Their strong dynamics demand attention; and not just because you play louder than normal. Occasionally uncouth, always communicative — just like real musicians.

I started off thinking the Heresy III would be fun. They’re much better than that. They engage you in ways that other loudspeakers don’t. They won’t be everyone’s cup of tea – mavericks tend not to me. You might want to give them a listen though. An extended listen. An open-minded listen. Just be ready for the Heresy III to get their hooks into you (as they did me). 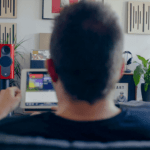 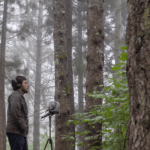