Mainstreamers visiting their local big Apple or high-end department store might see Naim’s Mu-so as a luxury (mains-powered) Bluetooth speaker. As one might expect at €1199, it stomps all over its smaller battery-powered brethren. The KEF Muo (US$350) is one of the best of the portable Bluetooth bunch but sat next to the Naim long box the Muo is outclassed in every respect. The Mu-so delivers oodles of dynamic slam to sound larger and more impactful than its diminutive rival.

The Mu-so also sounds larger than its letterbox profile might suggest. Naim has wrapped an MDF box with brushed aluminium and sat it on a clear perspex plinth whose left side glows with the Naim logo when powered on. The rear-facing heatsink lends some industry to the minimalist design and the large, frictionless volume wheel is derived from Naim’s uber-high-end Statement amplifier.

We might expect such a low profile device to beam like a traffic light. But MGMT’s Oracular Spectacular, aptX Bluetooth-d streamed to the Mu-so from an aptX-compatible LG V30, let’s us know early on that the Mu-so’s dispersion and sense of layer separation are well above average for a single loudspeaker.

On the inside, a DSP crossover splits the audio signal between a sextet of 75 Watts Class D amplifiers: two tweeters, two mid-rangers and two ‘race-track’ bass drivers. One of each per channel.

The Mu-so’s TOSLINK input, tucked away on the underside invites TV hookup. I paid close attention to the intro music fronting Netflix’s Marcella and Amazon’s Goliath to hear just how low the Mu-so can go: really low. Lower than the KEF LS50 that the Naim unit temporarily replaced. 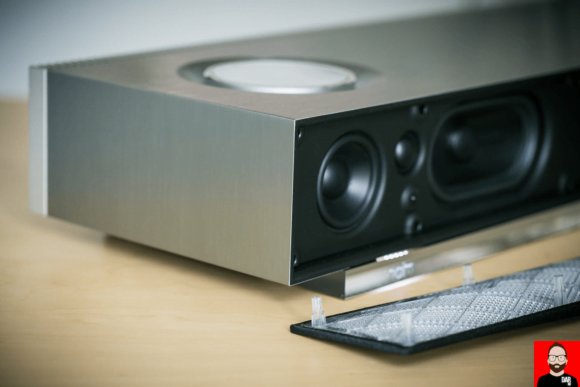 Back on music duties, the Muso made light work of conveying the raw physicality of Dinosaur Jr’s Beyond, in the process showing off its muscularity and ability to steer clear of sounding thin and reedy when cranked a little harder. Unusually for a Bluetooth speaker, the Muso sounds thick n meaty.

There’s more than enough to enjoy here without needing to make the leap from Apple Store to hifi retailer. For most people, the Naim Mu-so will be the full monty of music playback in the home; an Objet D’Art that streams music.

The Mu-so’s form factor that speaks to those living in smaller spaces; or to those who don’t want a fully-fledged hi-fi system dominating their lounge room; or to Naim devotees who want something for the kitchen. A luxury Bluetooth speaker AND soundbar rolled into one.

But the Naim engineers didn’t stop there.

The Mu-so is also a network speaker that offers UPnP access to NAS drives or a direct-connected USB storage device. BYO smartphone control app or use Naim’s own; you’ll need it for Mu-so setup and wifi onboarding.

More discerning listeners will want to avail themselves of the Mu-so’s Ethernet port that elevates hi-res streaming support to 24bit/192kHz. Like Apple’s own AirPlay, the Mu-so’s wifi streaming input is capped at 48kHz, which is no big deal for this Redbook-centric audiophile.

During my 6 week test period, I Roon’d regularly and wirelessly to the Mu-so’s AirPlay input with additional listening executed via its Spotify Connect input. Defying expectations, the Mu-so extracted decent tonal colour from the likes of Low’s C’mon and The Smiths’ Hatful of Hollow. Only very occasionally did its presentation dip into shades of grey.

Wider of soundstage than the Devialet Phantom but nowhere near as bass-heavy, I’d peg the Mu-so as an all-in-one hi-fi system scaled down to the width of two vinyl LPs:

Which begs the question – why aren’t diehard audiophiles tripping over themselves to run a Mu-so as their main hi-fi system?

In short: it isn’t for them. The Mu-so doesn’t do proper stereophony as audiophiles know it — where physically separated left and right speakers paint an illusory sound image in-between. In this respect, the KEF LS50 Wireless win every time.

And yet the audio world isn’t black and white. I’m not convinced that the Mu-so’s sticker price spent on entry-level separates would win out in every case and in all respects. A streamer that does as much as the Mu-so would eat a sizeable chunk out of our €1200 budget. And not all entry-level loudspeakers paired with entry-level amplifiers will match the Mu-so’s bass reach, thicker-than-average acoustic mass and macro-dynamic charge.

Not in doubt: the Mu-so doesn’t ask us to confront myriad system configuration possibilities and won’t see us caught up in a mess of interconnects and loudspeaker cable. It’s one box. One decision. Plug and play. No more to pay.

Whatever the Mu-so’s audible compromises, as heard from an audiophile perspective, no entry-level amplifier offers a volume control as large or as satisfying as the Mu-so’s. Not a single one. Naim has, quite literally, reinvented the wheel for deep ergonomic joy.

The control wheel is the star of the Mu-so show and when coupled with Naim’s own smartphone app, they set the tone for a more audiophile-centric Naim-fronted system. That’s here.