On its back panel, the JF DestinY MX-1 shows us wireless (2.4GGHz and 5GHz) and Ethernet streaming inputs plus coaxial S/PDIF and USB digital outputs. Unusually for its US$499 starting price, the MX-1 also sports an i2S (HDMI) output. Oh, and there’s a Bluetooth input too. An internal DAC built around a Cirrus Logic CS43130 chip can be added for an extra US$150.

PCM support on the MX-1 tops out at 32bit/768kHz and the whole shebang comes wrapped in an aluminium chassis available in black, silver or gold finishes. A remote control is also included… 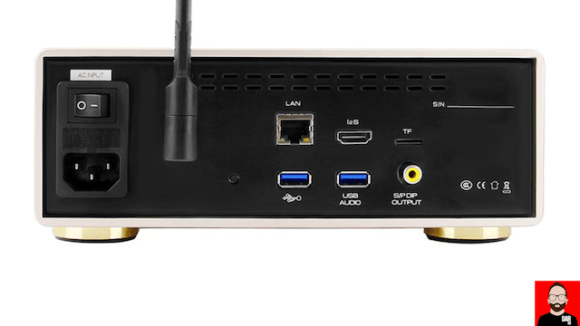 …but we might not need that magic wand so often. The MX-1 breaks from the norm of entry-level streamers with an 8″ touchscreen and an SRC-free Android 7 operating system that opens the door to Google Play Store app installation. Guten Tag, Soundcloud. Hallå, Spotify. Hallo, Tidal. Bonjour, Qobuz. Wassup, Roon Remote.

Alternatively, music can be played back from a directly-connected USB hard drive using DestinY’s smartphone app (which, at the time of writing, appears to be Android only).