This audio reviewer’s self-imposed brief for Munich High-End 2018 was not only to take a snapshot of what’s new and to go long on video in the process but also to un/cover and profile manufacturers whose work stands out as markedly different. Metaxas & Sins are one such manufacturer. 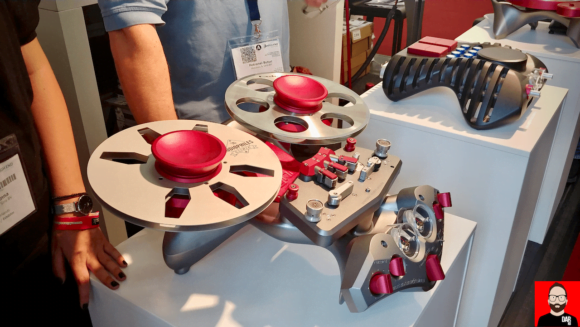 Where art meets technology. A strapline that undersells the hi-fi products designed and made by Kostas Metaxas, a Greek-Australian recording engineer now living in the Netherlands. How about: art pieces that also reproduce sound? Better – but still not quite there.

Metaxas and Sins’ (read: sons) latest additions to their hifi gear range are a £35,000 ‘Phonographic Perambulator Turntable’ whose outboard motor-mount oozes – literally – Salvador Dali and the ‘GQT Portable Recording Device No. 1’ (£TBC), a reel-to-reel machine that channels Max Ernst. As the man himself says of his turntable, “It’s a luxury object…but it’s a piece of art.”

How about this then: Metaxas & Sins work stands as alone as a Giorgio De Chirico in a hifi world dominated by John Constables and William Turners.

From the floor of Munich High-End 2018, I spoke with Kostas Metaxas about why his gear looks like it does and what motivates him to make it so: