DSP. Digital signal processing. The likes of Sonos, Apple and Amazon harness its power to extract the best possible performance from their pint-size loudspeakers. In the headphone space, DSP’s impact becomes clearer. Ever tried switching the active noise cancelling off during a flight spent with headphones from Sony or B&W? The difference isn’t small.

Elsewhere, Audeze is taking DSP to the next level with Mobius’ head-tracking. Nuraphone uses it to profile a listener’s hearing before customising their headphones’ frequency response accordingly.

Audeze’s DSP smarts show up again in the back end of Roon where bespoke presets pull improved sound quality from every model in their range. Audeze bakes the cake with hardware and ices it with software/DSP.

Sonarworks‘ True-Fi desktop app (MacOS, Windows) applies DSP-powered improvements to headphones made by a wider range of manufacturers. The Latvians measure a headphone – often several units – before re-moulding the frequency response in the software domain, showing that extra performance can be juiced from high-end ‘phones and uber-low-end models made tolerable.

For would-be room correctors, Roon users can manually tweak the frequency response curve server-side but (presumably) only once the room has been measured with REW. For more automated room correction – measurement and correction in a single package – Sonarworks show up again with their Reference 4 software to sit alongside Dirac.

For those already doing digital audio, DSP isn’t too much of a jump to the left. Silly to complain about getting wet when you’re already in the ocean. It’s a different story for vinylphiles standing reluctantly on the beach with towel in hand. Their all-analogue signal path is more precious.

The PS Audio NuWave Phono converter‘s line level output can be piped digitally via USB onto a hard drive for playback on any digital system. One well-known Japanese reviewer once told me this is common practice among vinyl-loving audiophiles in his home country. They’d rather not wear out their records with repeated plays. Go Figure.

More practically, vinyl playback turned to digital – needledrops – allows us to take our cartridge-turntable-phonopre combo where it wouldn’t normally go: out of the house, into a car or onto a plane.

So far so optional.

DSP makes digital conversion compulsory. For some, that represents a mental leap too great to traverse willingly. Even the idea of digitising a phono stage’s output and mathematically processing the results can rub deeply rooted all-analogue thinking the wrong way. Analogue-or-die vinylphiles will object on a philosophical/theoretical level. Others will point to the qualitative loss wrought by the A/D converter’s input stage, its clock, the ADC chip, the DSP, another clock, the DAC chip and the D/A converter’s output stage.

Sweet Vinyl’s Sugar Cube SC-1 is a hardware device that de-pops and de-clicks vinyl playback in real time but – crucially – for which an all-analogue bypass is possible.

In comparing the passed-through analogue signal to the digitally processed version, Michael Fremer wrote, “…textures were more supple and transients somewhat smoother and more delicate in the “bypass” mode.” A win for keeping things strictly analogue? Not so fast. In the very next paragraphy: “Which is preferable? No contest! Getting rid of the “pop” in exchange for the most subtle of differences was a most worthwhile trade-off.”

Fremer says not why he wouldn’t run the SC-1’s pop/click correction 24/7. That’s not the point. He weighed up any digitally-induced loss against the improvements made to radial clicks and hisses by the Sweet Vinyl to find the DSP diversion more than worthwhile. In other words, removing surface noise brings a more noticeable improvement than anything lost to digital conversion. It adds more than it takes away.

For the majority of DSP-ing devices, no analogue pass-through presents to give us a window on a world without the digital circuit’s (possible) colouration or resolution loss. In these scenarios, where ignorance becomes bliss, we should still remain mindful of the cost-benefit analysis. After all, we don’t bring an analogue signal into the digital domain to do nothing with it.

An analogue signal entering the KEF LS50 Wireless’ RCA inputs is digitised upon arrival to allow for master/slave hand-off and crossover execution. All done in the DSP, steeper filters and phase error-correction can be implemented more accurately than with an (analogue) passive network. That same DSP also lets users adjust the LS50 Wireless’ output according to placement (stand/desk) and boundary proximity as well as the room dimensions and acoustic make-up. Tuning the loudspeaker to the room or desk will have a more substantial positive impact on the listening experience than anything lost to digitisation.

Like the KEFs, direct experience with the Genelec 8341 ‘The Ones’ actives tells me that they resolve upstream changes with crystal clarity and in spite of their internal ADC-DAC diversion. Once again, crossover and bass/treble trim/boost executed in each loudspeaker’s DSP introduce fewer phase/timing errors than a passive all-analogue circuit. That’s not all. The Ones’ DSP applies Genelec’s GLM 2 ‘room response compensation’. Because, like recording studios, real-world listening rooms need all the help they can get.

Kii Audio take their DSP to the next level. The Kii Three loudspeakers’ mathematics ensures audio frequencies below 700Hz are dispersed not omnidirectionally but in a cardioid pattern. Impossible in the analogue domain!

Not only are our rooms imperfect, so too are our passive loudspeakers. Analogue signals entering DEQX’s PreMATE+ are digitised to allow for DSP correction of the downstream loudspeaker’s timing and frequency response. The PreMATE+’s DSP can optionally apply room correction to the corrected loudspeakers. Two substantial problems solved for the price of one!

Dirac’s room-correcting software has been around for a number of years already but more recently Arcam put Dirac Live inside a selection of their AVR amplifiers so that analogue inputs weren’t left out in the cold. 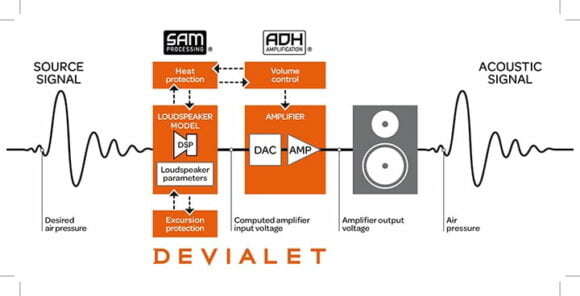 And so it goes with Devialet’s Expert/Pro super-integrateds. Analogue signals entering the shiny flat unit are instantly digitised for the internal DSP to apply phono stage settings and RIAA curve correction in the digital domain for turntablists but also to allow for Devialet’s SAM loudspeaker correction.

Back in headphone land, Sonoma Acoustics have used DSP to ‘voice’ the output of the amplifier in their Model One (M1) electrostatic system – all inputs are digitised upon entry – and 1More’s nifty Dual Driver IEMs tap an iPhone’s Lightning port for digital supply before applying noise cancellation. Experience tells me that, all other things being equal, lowering the intrusion of background noise more dramatically impacts the portable listening experience than an extra 8 bits, a higher sample rate or MQA encapsulation.

My goal here isn’t to produce an exhaustive list of devices that use DSP to solve not insubstantial problems in audio playback. Rather, it is to illustrate just how those improvements are significantly larger than any ‘purity’ removed by digitisation using examples with which I have enjoyed hands-on experience.

Analogue-or-die vinylphiles turning their back on the power of DSP are perhaps allowing their idealism to stand in the way of a more pragmatic approach to system building. (Side note: what of analogue signal purity when no two turntables, cartridges or phono stages sound alike?)

And therein lies a cruel irony: in the pressing of modern pop/rock/electronic records, digital (hi-res) masters are now the norm (not the exception) but, as per DSP, we should ask: what benefit does a master’s digitisation bring to the listener?

In other words, vinyl fans (like yours truly) are already exposed to a previously digitised signal so why stand firm against DSP in a home hi-fi system when its careful deployment will almost always leave notions of analogue signal purity standing in the shade?