Don’t call it a comeback. The US music industry is once again in rude health according to figures recently published by the Recording Industry Association of America (RIAA). For 2017, music sales and streaming clocked up $8.7 billion in revenue. That’s ↑$1.2 billion on 2016, which itself was ↑$0.8 billion on 2015.

And in case it wasn’t anecdotally obvious, American listeners prefer to rent music than own it. Streaming service revenues continued to climb – ↑43% on 2016 – with the likes of Spotify, Tidal and Apple Music now generating two-thirds of the US music industry’s total revenue. Downloads and physical formats all but made up the remaining third.

In other words, for every dollar spent on a download, a CD, a vinyl record or a cassette, two are spent on streaming.

Within that 2017 music-owning minority, another significant shift occurred. For the first time in over half a decade, the percentage of revenue generated by downloads (15%) fell below that generated by physical formats (17%).

Not that physical format sales themselves were especially robust (they were ↓4%). It’s that download revenues fell harder. Much harder. Off a cliff: ↓25%. 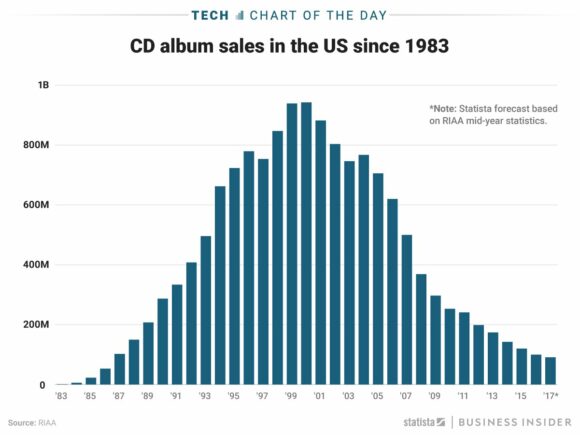 Looking more closely at physical format sales, vinyl revenues were ↑10% but the biggest surprise came from the format that just can’t get any respect – the CD – whose revenues were ↓6% – only a single-digit drop, and one-quarter of downloads’ 25% tumble.

Not that you’d know it from mainstream press coverage but dollars dropped by Americans on CDs in 2017 still outnumber dollars dropped on vinyl. And by quite some margin. CDs generated $1.1 billion dollars in revenue. Vinyl did well under half that: $395 million.

Remember though: this is revenue, not unit sales. With vinyl’s premium pricing factored in (usually $10 on its shiny disc-d younger brother), the total number of CDs sold in the USA last year is probably somewhere between three and four times the number of vinyl records sold. 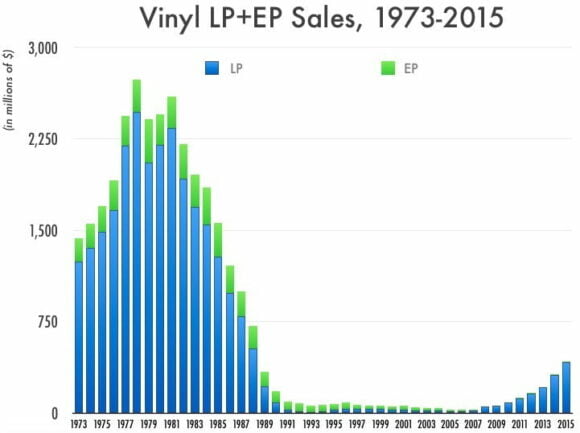 So let’s spin the RIAA report a different way: the CD is still the most popular physical music format in the USA…

According to this archived 1991 Fortune article, RIAA-reported US music industry revenue broke down as follows (in ‘2007 dollars’):

These numbers remind us that prior to the CD’s golden run through the 1990s, before Napster ruined the party, the cassette tape was the second most popular physical format — not vinyl.

According to the following animated graphic (source unknown), the cassette tape ate 8-track tape sales in the late 70s before converting would-be vinyl buyers in ever-increasing numbers. By 1983, a year after the CD’s introduction, cassette sales almost matched LP sales 1 for 1. The cassette then occupied a steady 50% of music sales throughout the 1980s, unmoved by CDs until the turn of the decade when shiny silver disc began began to eat its lunch.

It’s not hard to see why. The CD offered consumers the portability of cassettes with none of its hiss or wow and flutter. Spinning one more time: the CD didn’t drive consumers away from vinyl; it saved them (us!) from cassettes.

Returning to 2018’s streaming age dominated by MP3 (or similar lossy codecs), the CD and its uncompressed contents are reflected by its mirrored surface as an audiophile luxury.

For those who miss owning stuff, CDs are smaller, more durable, car-playable, more easily ripped to hard drives and are easier to store (and move house with!) than vinyl. And yet they still deliver the pleasure of owning a physical format, albeit smaller.

Mentally extrapolating the latest RIAA stats, CDs probably won’t disappear altogether but rather slide into a comfortable niche. We might wonder: will CD sales plateau before they drop as low as vinyl?

If you’re one to joke about how “no-one listens to CDs anymore!” (and you’d be half right) then it’s worth noting that even fewer people listen to vinyl.