McIntosh has today announced the latest in a long line of new products: the belt-driven MT2 Precision Turntable.

Beginners will likely be drawn to the MT2’s factory-fitted MC cartridge that offers a low-fuss setup and whose high output will play nicely with MM phono stage inputs but also the no-fuss setup. Cartridge alignment/overhang, its tracking force, anti-skate and arm height are all set at the factory so that this McIntosh turntable is ready to spin the black stuff shortly after unboxing.

Material-minded audiophiles will probably take an interest in the MT2 cartridge’s “alloy cantilever and an elliptical diamond stylus” and the light/rigid tonearm, machined from ‘dural’-aluminium and internally damped with “special materials”. The vertical bearing about which the tonearm rotates features “two precision ceramic surfaces with damping fluid” and the horizontal bearing is a “gimballed sapphire design”. 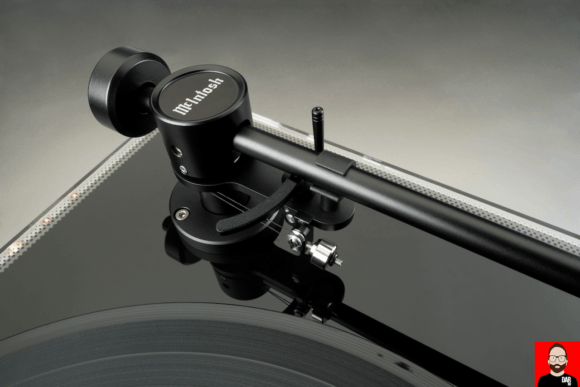 An “external voltage-stabilized power supply” juices a physically-decoupled DC motor that powers the MT2’s belt that in turn rotates a one-inch-thick, high-mass, two-piece platter. The platter’s outer section is made from a “special dynamically balanced polyoxymethylene”, the inner from CNC-milled aluminium. Underneath the plinth’s black lacquer finish sits highly-compressed, resonance-optimised wood.

As with almost all McInstosh products, the initial attraction is outwardly physical and the pull oh-so-very-magnetic. This ‘table’s green glow is hard to ignore. On that, the supplied press photos do the talking:

The MT2 will begin shipping to dealers in April with an RRP of US$4000 to which, in international markets, local VAT/customs duties will be added.