Vidar – “Veedar” – lovechild, son of Odin, second in strength only to Thor and the mythological Norseman lending his name to Schiit’s Audio’s first power amplifier. Not for headphones but for loudspeakers. The company’s Stateside direct sell model means pricing is super sharp: US$699. (DAR’s product launch week preview can be read here).

Everything that ships from the Schiit warehouse in Valencia, CA is made completely in the USA and is backed by a five year warranty. That’s twice potent.

That the majority of loudspeaker amplifiers refusing switching power supplies and/or Class D topology sell for a long way north of a thousand dollars means Vidar has the potential to cause a Schiitstorm. 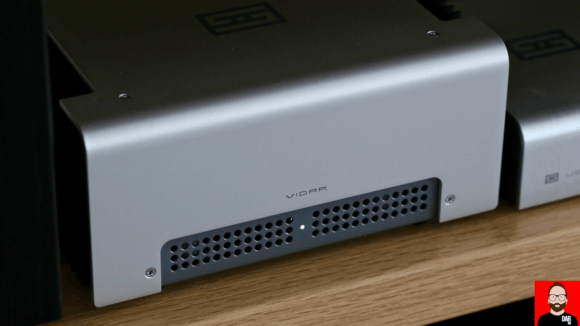 Schiit co-founder and Vidar designer Jason Stoddard has sidestepped potentially spiralling chassis and cooling costs by folding the heatsink into the chassis’ structure whilst holding the amplifier circuit to a single PCB, thus simplifying production. DC offset and operating temperature oversight comes from an adjacent (and independently powered) microprocessor circuit.

Careful now: at 15kg, those heatsink-finned cheeks feel sharp when lifting the Vidar loaner from its box.

On Vidar’s back panel, twin RCA sockets and an AudioQuest Yukon interconnect join the Schiit box to the single-ended pre-outputs of Vinnie Rossi’s LIO for a first listen via KEF’s LS50: on the menu, an uptick in the LIO’s sense forward momentum and bass tautness. As one might expect, the addition of the Vidar to the LIO turns Ben Frost’s The Centre Cannot Hold into an even more potent force majeure whist carrying over the AVC pre-amplifier module’s elegance and pep.

However, the modular LIO configured as AVC/tubestage pre-amplifier hits the wallet at US$5.5K. That renders it a potentially unrealistic Vidar dance partner. Common sense might reasonably be called into question when trying to save major coin with one hand – the Vidar – only to spend it again with the other – the LIO. Something more price-commensurate was called for. 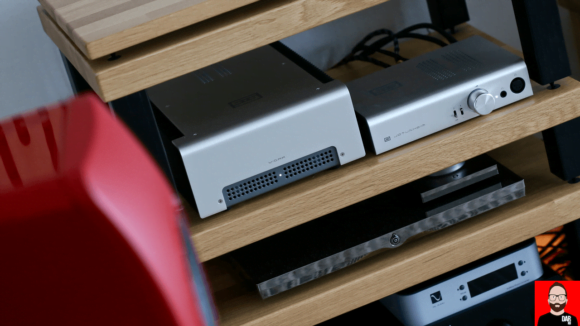 Stepping up to the plate with factory-fitted phono module in tow came Schiit’s own Jotunheim (US$499), primarily a headphone amplifier but packing balanced and single-ended pre-outs ‘round back. Vidar’s single XLR input is reserved for running a pair as monoblocks – I only have one.

With the Jotunheim playing pre-amplifier to the single Vidar, I again went with a single-ended hook-up but post-LIO the result was disappointing. The neo-classical/ambient washes of Alva Noto’s Xerrox Vol. 3 were robbed of the air they need to communicate an ocean of sound ebbing with microscopic particles.

On the upside, this speaks to the transparency of the Vidar: the Jotunheim-for-LIO swap-out had exposed its ability to clearly resolve upstream differences, warts n all.

More often than not, the weakest link in a pre-amplifier’s circuitry is its volume pot. By definition it is subtractive — brakes applied to a car that would otherwise drive at full speed. 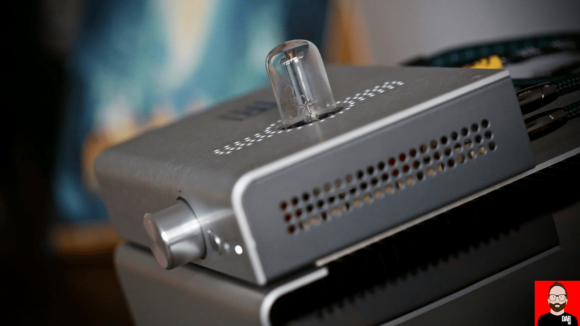 In the Jotunheim we note a “27mm Alps 4-gang balanced pot”. Clicking over to Schiit’s pre-amplifier range, the optionally tubed-buffered Saga, teased alongside Vidar at RMAF 2016, offers a microprocessor-controlled relay-switched stepped attenuator – its audible clicking takes some getting used to. But that price. US$349. Bonkers.

I’ve reviewed numerous Schiit pieces since their 2010 inception and every single one has exceeded price expectations – no exceptions. That’s a track record I can confidently put my own cash behind. Clickity-click on Schiit Europe’s website: 1) add to cart and 2) checkout put a Saga at my door within a week.

With the 6H8C-based hybrid tube buffer engaged, the Saga runs active to – according to Schiit – drive long cables or add some “tube sound”. However. one click of a front panel switch (or business card-sized plastic remote) and the audio signal bypasses the tube buffer to see the Saga operate passively i.e. no gain. 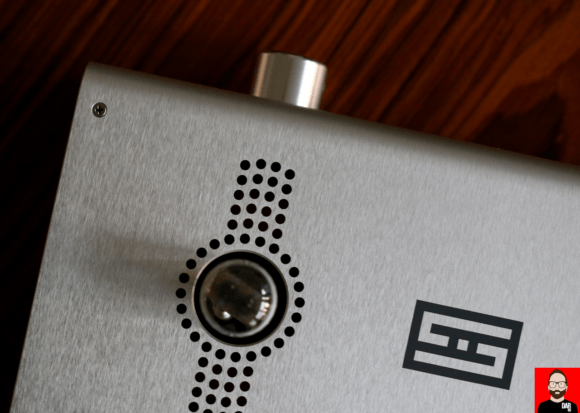 The difference between the two operational modes is subtle but for what follows I opted for the tube buffer’s foot-forward midrange. Buttery or syrupy it is not. With the right tube roll it could be if you wanted it to.

Most importantly, in delivering more of a polished windowed vibe to take the listener further inside Tom Waits’ recently remastered Mule Variations, the Saga aces the Jotunheim as Vidar partner. No contest. That’s the closest I get nowadays to the most egregious of hifi reviewer cliches: it was as if Tom Waits were right there in the room with me. ‘Nother whisky, Tom?

To state the obvious: music doesn’t arrive at the Saga wirelessly. With AudioQuest’s Evergreen interconnect (US$32), I connected an Allo Boss DAC HAT, sat atop a Raspberry Pi inside an acrylic case (US$100), to one of the Saga’s five single-ended inputs.

A complete audio system for a little over a grand – just add loudspeakers. That’s a turn of phrase often ascribed by yours truly to super-integrated amplifiers that roll amplifier and DAC and/or MM phono stage and/or streamer under one roof. Hello Peachtree nova300 (US$2299). Ni hao AURALiC Polaris (US$3799).

On sound quality, the tables turn. Fronted by the Allo-loaded Raspi streamer – the Vidar/Saga pairing communicates greater acoustic mass and slightly richer tonality (with zero hit to detail retrieval) to connote a more organic vibe; one that makes lighter work of an afternoon listening to the likes of Wire, Future Of The Left and The Horrors.

The Schiit pile is less fatiguing than the rambunctious Peachtree, most noticably with poorer recordings – that tube buffer helps but only a little. Disengaged, the Vidar/Saga takes the nova300’s “squeegee clean midrange and taut, muscular low end control” (a quote pulled from my own nova300 review) to better ink tone colour and put the Vidar a double espresso deeper into the morning. 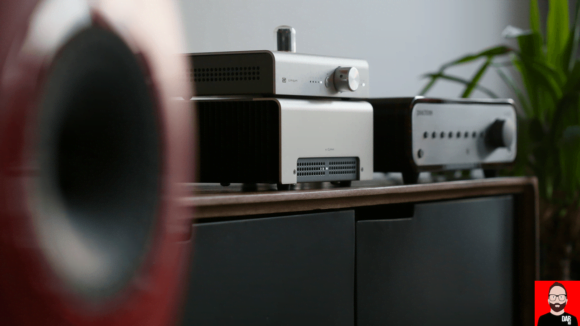 The nova300 is by far the simpler solution. It’s also more powerful, making it a better fit for more demanding loudspeakers. In some rooms, Peachtree’s curved sleevewrap and lack of cable salad will look better too. The Schiits though – they make music sound more believable with everything except the most dramatic of electronic music. I’m looking at you Blawan, Planetary Assault Systems and Maurizio.

The AURALiC takes the nova300’s DAC and MM phono stage baseline but swaps out its 6.4mm headphone socket for a 2.5″ SSD slot to act as server and streaming via the company’s Lightning software platform. A true all-in-one that wants for little. With the KEF LS50, the Polaris offers greater treble refinement than the Peachtree and whilst the Schiit two-fer still can’t match its delicacy and finesse, the Polaris pulls up second on tonality and ease.

Compared to the Saga/Vidar combo, the Polaris sounds a little more herky-jerky when it comes to rhythmic poise; it’s Talking Heads ‘77 to the Schiit’s Stop Making Sense.

Of all the amplifiers knocking around the DARhaus, Rotel’s RA-10 (£350) is topologically- and price- proximate to the Schiit stack but it’s the latter of the two that gives us the greater top-to-bottom heft. 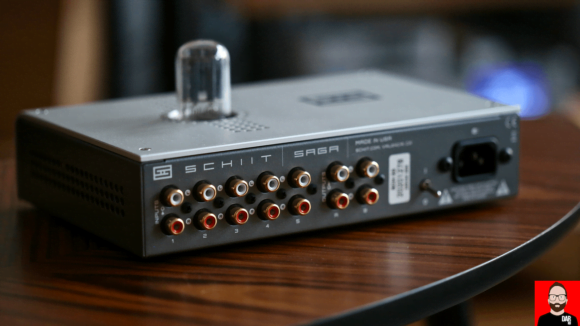 Back to Vinnie Rossi’s LIO: its DAC and AVC-pre stage that route the signal directly into a 25wpc MOSFET module digs deeper for detail than the Schiit-pile, especially at lower volumes. Bass is less abundant but that Schiit-derived heft isn’t just a bass thing – it’s the result of better driver control for a keener sense of forward momentum. It’s with these qualities that this Schiit system come back at the LIO.

Conventional hifi thinking tells us that all things being equal, separate pre-amplifier and power amplifier will better the sound of an equivalent integrated. Twice the transformer and double the casework means separates often arrive at a significant premium.

Not here though. With their Vidar and Saga, Schiit turn conventional thinking on its head to lay down a serious challenge to ANY amplification selling for a coupla clicks north of a thousand US dollars.

Anyone eye-ing the Rotel RA-1572 (US$1699) should consider the following: adding Schiit’s US$129 Mani MM/MC phono stage, US$99 Modi 2 DAC, Magni 3 (US$99) headphone amplifier and another trio of interconnects to the Saga/Vidar combo still see their total spend land in the same ballpark.

I can’t tell you which sounds better – that’s for you to decide; make use of the 15-day trial if you live in the USA. The point is, Schiit lay down the red carpet to a separates approach but without the price premium. Welcome to the great leap forwards!