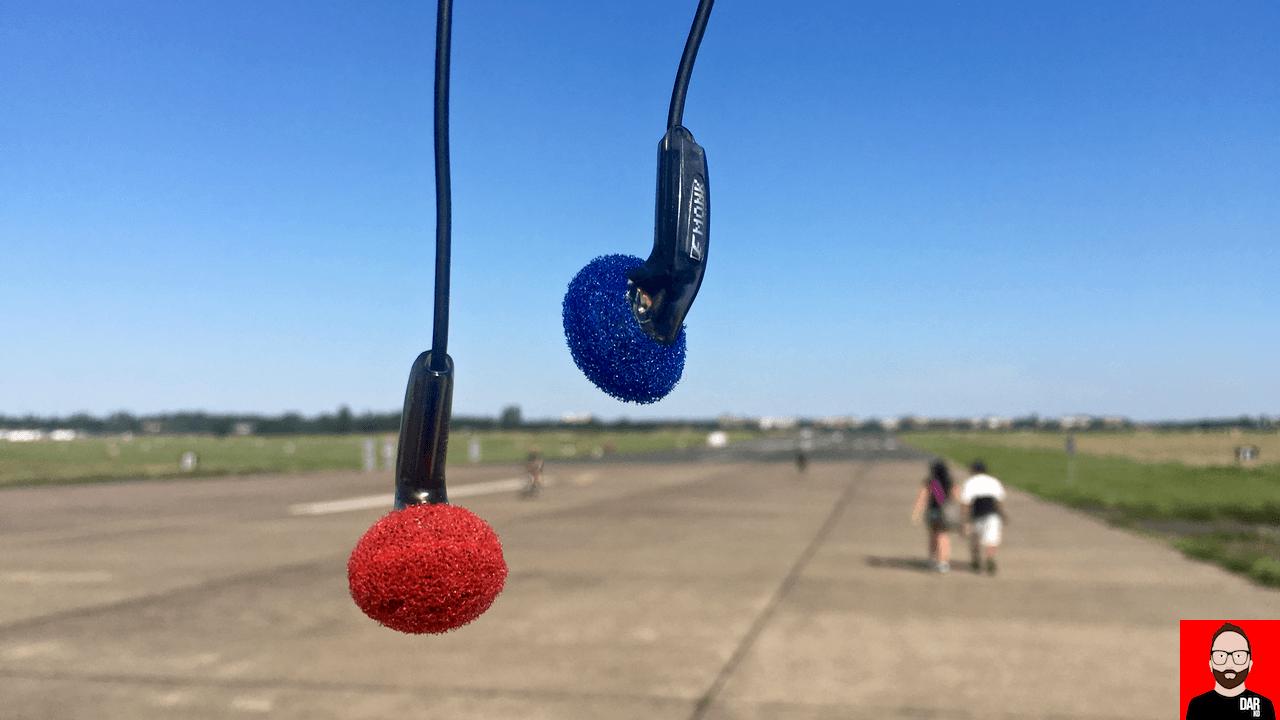 Another green world. Walking. Running. Cycling. Skateboarding. In-line skating. Terrasailing. Kite flying. These are the many activities undertaken by visitors to Tempelhofer Feld, a slice of the country tucked away in the centre of Berlin.

The twist in this recreational tale is Tempelhofer Feld was not too long ago Tempelhofer Airport. After ceasing operations in 2008, the airport was turned over to the community for recreational activities, a bird sanctuary and a rechristening.

The runways however – they remain fully intact. Going from one end to the other, a full 2km with two wheels or two legs, is one of Berlin’s most interesting outdoor activities. Not least because Tempelhofer Feld is closed to cars and motorbikes. A safe space for cycling outdoors whilst also listening to music. The ideal destination for this L.S.G. die-hard to connect the virtual motion of Oliver Lieb’s 20th anniversary rework of 1997’s Netherworld to the physical motion of a bicycle.

With which hardware do I presently listen? At home I might reach for the greater audible nourishment of full-sized headphones. For city walkabouts, commutes and exercise the need for something more portable presses harder. 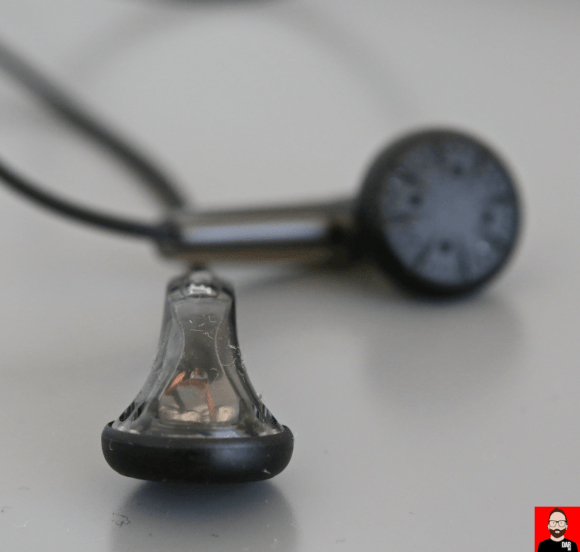 At Tempelhofer Feld, I don’t use what I can’t afford to lose. That rules out high-end pieces: Noble Audio’s Katana and Campfire Audio’s Andromeda. A headphone/earphone that sells for well under a hundred dollars is called for. Xiaomi’s Piston series springs to mind – they sell for ~US$25 and up. Can we go even lower on price and still maintain listening pleasure?

Venture Electronics’ (VE) Monk Plus are as no-frills as their plastic bag packaging: a 3.5mm plug terminates a Y-shaped cable in the middle of which we find no in-line remote/microphone and a somewhat pedestrian aesthetic at the business end.

The Monk Plus aren’t in-ear monitors (IEMs); they’re earbuds. In the 90s, almost all earphones were like this. Earpieces don’t seek a snug fit against the walls of the inner ear but instead choose to rest in the outer ear. An optional chin slider helps lock ‘em tighter in place.

What we hear is therefore less seal-dependent than the aforementioned Noble and Campfire models; less physically intrusive too. The Monk Plus are an earphone for those who don’t get along with IEMs. 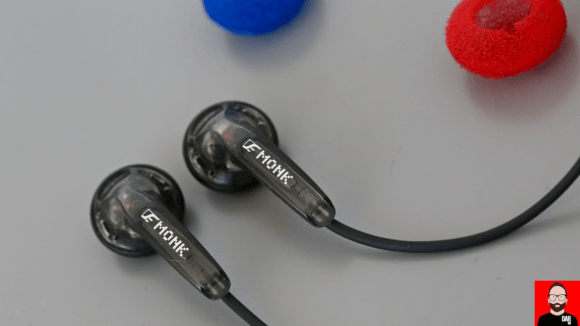 Back in Berlin, The Factory is a co-working community space located immediately adjacent to the Berlin Wall Memorial that runs along Bernauerstr. in Mitte. I am a member. Occupying the floor/s above is Soundcloud’s headquarters.

On external noise isolation, the Monk Plus sit somewhere between the Audeze iSine and an the Noble/Campfire IEMs. The VEs don’t leak as much high frequency detritus as the Apple earbuds of yore but that which does spill might irritate others working in close proximity and/or in quieter offices.

I couldn’t use the VE in The Factory’s “Quiet Room” without drawing frowns from co-workers. In other rooms, where full conversation and phone calls are permitted, there’s no issue.

For the walk to and from The Factory, I prefer to be aware of traffic noise when crossing busy intersections. If it rains, I take the U-bahn where any audible leakage is completely drowned out by train noise.

With the relative quiet of Tempelhofer Feld, hooking the VE Monk Plus into an iPhone has me questioning the desire for more. Remaining cognisant of background noise – of the movement of fellow cyclists and runners – not only keeps us safe from collisions but also erodes any possible advantages held by lossless streaming over lossy.

Similarly, the audible advantages of the Sony ZX-2 / AudioQuest DragonFly Black over the iPhone 6S Plus’ own 3.5mm socket go up in smoke when out and about with the Monk Plus. Besides – where would I stash a second device when my other front pocket is occupied by keys and a credit card? Only the FiiO X1 gets a pass but its audible advantages just aren’t as keenly felt with the free-flowing Monks flying across Tempelhofer Feld. 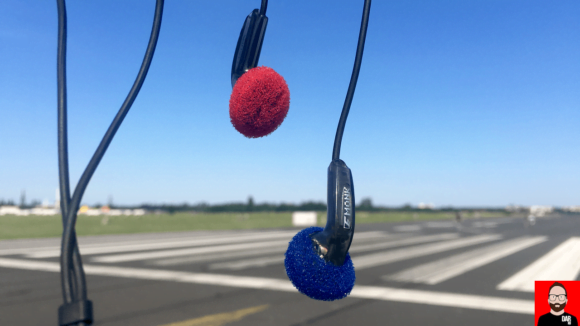 The Monk Plus’ most obvious and arguably finest ‘feature’ isn’t found on their specifications sheet but at the checkout: €10 (from Amazon.de). Dig deeper into the Internet to find a pair for even less.

Order directly from the manufacturer’s website or AlieExpress and options present for 3.5mm and 2.5mm TRRS balanced termination, alternative colours, cable upgrades and in-line microphones for iOS or Android. Fully-loaded, the most one can spend is US$35.

Must be a piece of crap, right?

Nope. Not by a long shot.

Overall sound quality takes us a long way north of initial expectations set by numerous similarly-priced convenience/dollar store earbuds, where tack-flat dynamics and a narrow headstage often conspire to sound like paper being finger-flicked next to the ear.

What we get is a spaciously clean and crisp sound with a few degrees of dry warmth added presumably to counteract audible anemia. Don’t expect to hear this with the VE fresh out of their bag — it only shows up after some serious burn-in time (200+ hours).

An opportunity to bring things full circle. Via the Monk Plus earbuds, Brian Eno’s classic Another Green World comes on as airy and open with a decent helping of mid-bass fleshing out that which sits beneath Eno’s own vocals (when they show up).

The soundstage is impressively large which in turn affords space plenty to the interplay between Phil Collins’ drum work and Robert Fripp’s otherworldly guitar sounds. You’d probably have to drop ten times the cash elsewhere – minimum – to realise the same degree of inner-Tardis-like capaciousness.

From B12’s Archive Volume III to Regis’ Gymnastics to Julian Cope’s Jehovahkill to Robyn Hitchcock’s Eye, the VE Monk Plus impress at every turn. Yes, even techno benefits from the Monk Plus cavernous and deeply-detailed mid-band. 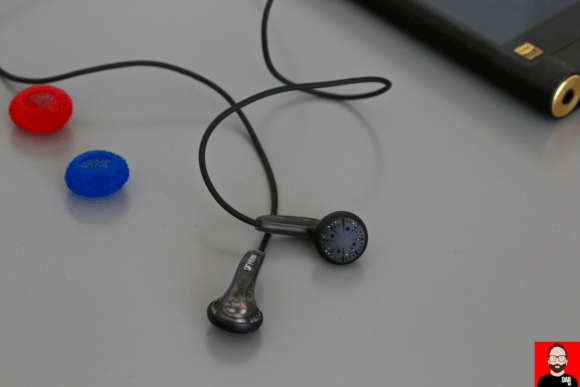 Fans of Joanna Newsom’s Ys or Bright Eyes’ Fevers & Mirrors will find even more to  enjoy here. And not simply with what occasionally feels like pre-cognisant vocal extraction. String instrument tone shines through nicely, albeit more noticeable once back at the DARhaus where the noise floor is considerably lower and D/A conversion / amplification is handed off to an AudioQuest DragonFly Black.

Proving the existenc of truth in every cliche, these earbuds benefit from better upstream electronics; However, an iPhone (or similar) will get you off to a cracking start. And for street life only the iPhone is where I (would) remain.

1. Perc’s relentlessly bleak Bitter Music – more Brit techno – tells us that the Monk Plus are featherweights in delivering low-end wallop. In a similar vein to standmount loudspeakers, the deepest lows are hinted at more than they are explicitly called out. The VE’s mid-bass (hump?) does most of the work here.

2. A peaky lower treble maintains keen listener excitement during the percussive attacks of Peter Gabriel’s “Kiss Of Life” but Built To Spill’s Keep It Like A Secret demands the application of foam earpads lest that same audible peak becomes too much to bear. Even more so when digging deep into The Flaming Lips’ magical The Soft Bulletin; the fluorescent yellow marker-pen of late 90s indie rock.

Besides, without earpads – blue on the left, red on the right – how do we tell left from right without squinting at the ‘L’ and ‘R’ etched into each earbud arm? Be warned those earpads tear easily. Thankfully, VE supply four pairs with the Monk Plus. 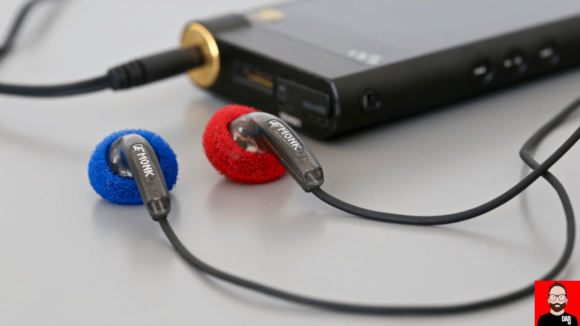 Such subjective quibbling dissolves in the context of the Monk Plus’ bargain basement asking price. Even at €50/pair we might look past such weaknesses in light of these earbuds’ midrange quality.

No – these aren’t the best earphones on the planet. Not by a long shot. They don’t even get close to the Noble Katana or the Campfire Andromeda which are both more detailed and are both capable of going lower with ease. Momentarily removing price from the conversation, if the Noble and the Campfire

At €10/pair, the VE Monk Plus knock it out of the park and into the next zip code. A super affordable earphone that pleases immensely. An earphone that can be lost and replaced in the blink of an eye. (They’d cost more to repair than replace). An earphone for friends and family. No need to wait for Christmas or a birthday.

No need to wait for friends though. Treat yourself to an earphone that will henceforth keep costlier models’ price/performance ratios in check.

VE’s packaging does not lie: the Monk Plus are indeed “The biggest bang you will ever hear for your buck”.

UPDATE: An earlier version of this article incorrectly stated that VE is Singaporean. The company is based in mainland China. 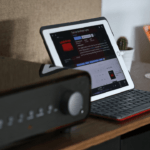 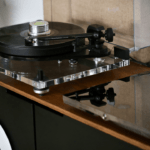