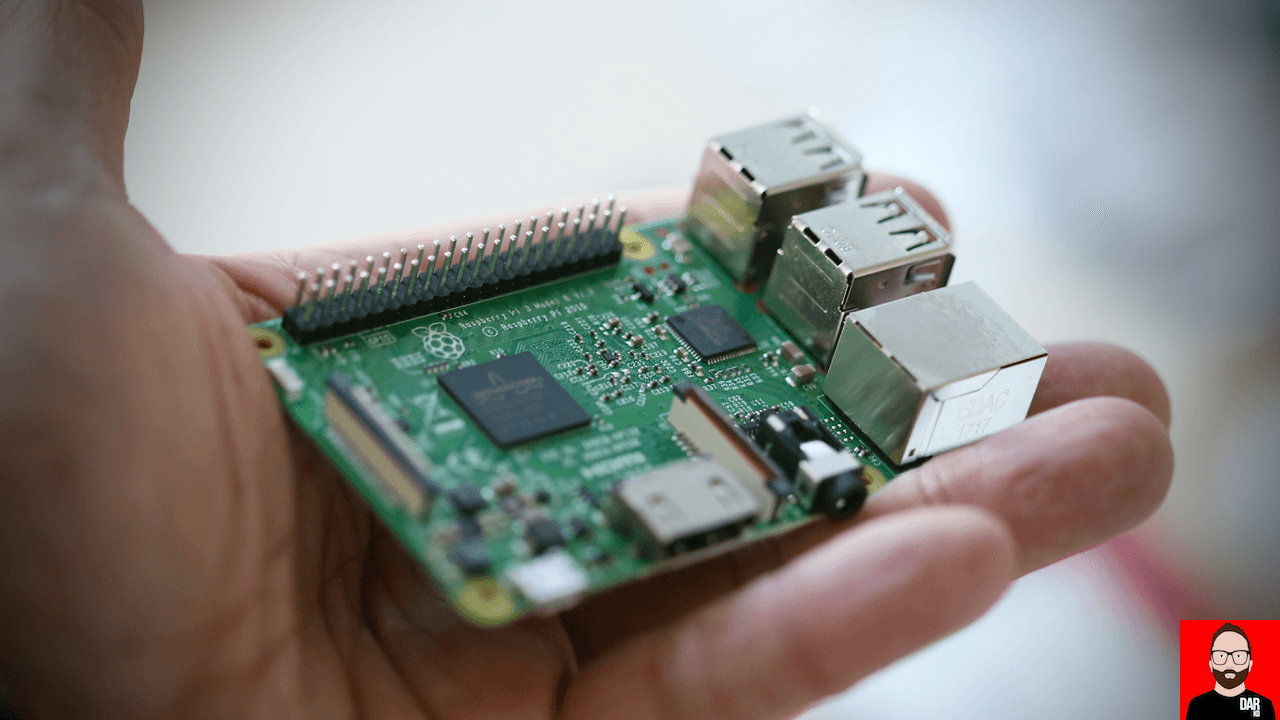 At US$2200, the KEF LS50 Wireless should have rival loudspeaker manufacturers quaking in their boots. A complete high-end audio system in a box. Just add mains power.

The LS50 Wireless’ Achilles heel, if they have one, is the in-house coded smartphone app. It’s fine for occasional use: system setup (‘onboarding’) and setting DSP according to speaker position, room size and its acoustic make-up. Less so for everyday music playback. The absence of gapless playback within the app’s Tidal and UPnP streaming implementations has this DJ mix and live set lover running for the recently announced Spotify Connect.

If only the LS50 Wireless were Roon Ready. Then…oh my.

My contacts at KEF remain tight-lipped about if/when their LS50 Wireless loudspeaker system will be made Roon Ready. And in the here and now we don’t have the fallback option of Airplay which itself doesn’t support sample rates beyond 48kHz. For Roon streaming, we must look to a third party solution.

Here we consider a considerably more affordable alternative: a USB-only network streamer for a mere €65 and an hour of your time (but – please note – with zero concessions made to jitter and electrical noise). 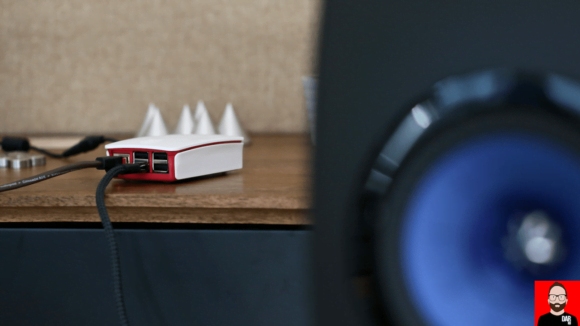 Instead, we will install Roon Bridge (software) to a Raspberry Pi to have it output digital audio over USB. In other words, a DIY Roon endpoint — one that will also work with almost any other USB DAC.

Given Linux’s flexibility and extensibility, there are likely numerous other ways to skin this cat. This is mine. Let’s cook!

First step: pull the Raspberry Pi 3 from its box and place it in the case. The ‘official’ case snaps together – no screws or screwdriver required. Super easy.

Before we can power it up we need to do some software installation work. Beginners will need to set aside ~45 mins but those already familiar with Linux and/or Raspi can probably knock this over in less than 10 mins. 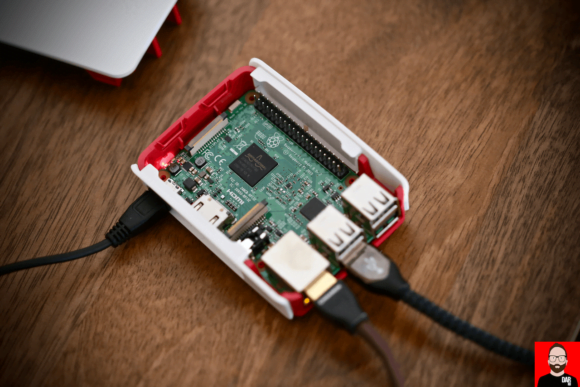 First up, the operating system must be flashed (copied) to the microSD card. Which OS? There are many from which to choose.

We will use Volumio here because it ticks the following boxes outside of Roon:

Download the Raspberry Pi version of Volumio from here. (No need to unzip it).

Now we’ll flash the Volumio image to the microSD card. For that we’ll need another piece of software. One of the easiest to use, especially for beginners, is Etcher; available for Windows, MacOS and Linux. Download it, install it.

Insert the microSD card into your computer. Fire up Etcher. Select the Volumio zip file, select the destination drive (the microSD card) and click Flash. Wait ten minutes. Now’s a good time to go make a cup of tea or coffee. 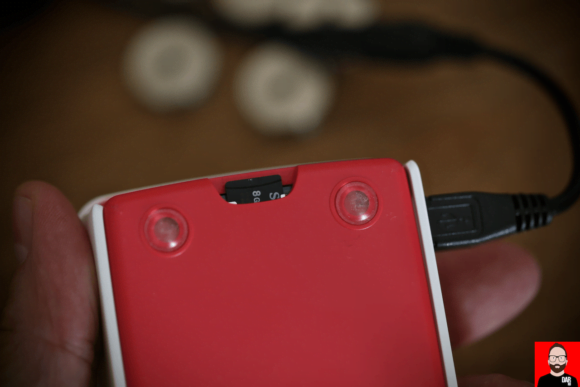 A word about wifi from Volumio’s quick start guide: “Volumio will create a Wireless Network called Volumio, the default password is volumio2. The Hotspot mode will allow you to connect to your Wireless Network without the need to a wired connection, just connect to Volumio Hotspot and configure your network on network options.”

The first boot will take a little longer than the usual 2 – 3 minutes, after which Volumio’s web interface becomes accessible via a web browser using the following URL:

If that returns nothing but a network error, login to your modem/router to find the Raspi’s local IP address.

Alternatively, run a network scanner app like Fing (Android/iOS). Write down the four numbers associated with ‘Volumio’ – e.g. 192.168.0.19 – and punch those into your web browser. (We will need these four numbers again shortly).

Time now to set the USB DAC as the output device in Playback Options. Find it in the first dropdown. Also: make sure ‘I2S DAC’ is switched OFF and click save.

The Raspberry Pi is now ready to play music. Keen to test it? Have Volumio auto-scan a directly-attached USB drive containing music and use the GUI to browse and play.

And if you don’t have Roon you can stop here and, as the cliché goes, enjoy the music.

Per the headline, we are interested in Roon, which, alas, isn’t installed as standard in Volumio.

To install Roon Bridge we must access Volumio via SSH. Later versions have SSH turned off by default. Enable it via 192.168.xxx.xxx/dev. More instructions here.

MacOS users should then fire up Terminal from the Applications sub-folder marked ‘Utilities’.
If you’re on a Windows machine, use PuTTY.

Log into the Raspi using its local IP address and the username ‘volumio’:

Before Roon Bridge, bzip must be installed:

Now to install Roon Bridge – copy and paste the following three lines of code, one by one, into the terminal window and hit enter.

The second command turns the downloaded file into an executable:

…so that it can be run as a software installer using the the third command:

Roon should now install. (Alas, I’m unable to provide tech support in the event of errors). 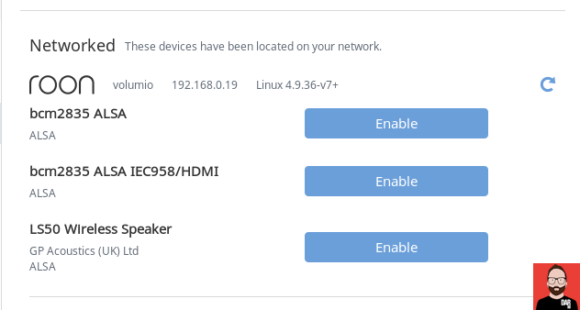 Now use Roon on a smartphone or desktop to locate the LS50 Wireless (or USB DAC) in Audio Setup. Its network connection is brought to life by the Volumio OS’ Linux-descended audio output system (ALSA).

Enable the USB DAC as a Roon output device, name it, select it as the preferred Roon output. The KEF LS50 Wireless are now Roon Bridged; ‘artificially’ Roon Ready with Roon-controllable volume.

Howzat for a frugal?

This story doesn’t end here. Not if you don’t want it to. In a pair of upcoming Raspi audio posts, we’ll look at how to improve this mini-PC’s (digital audio) sound quality. 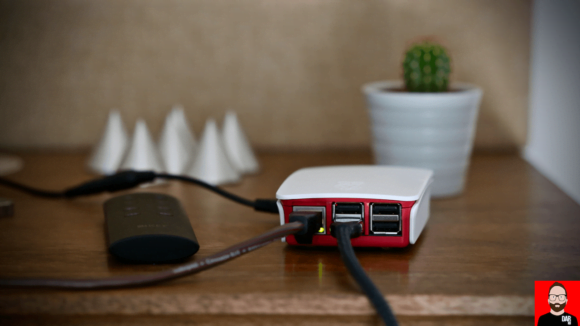 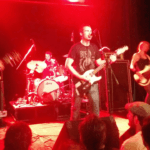 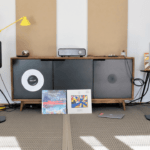