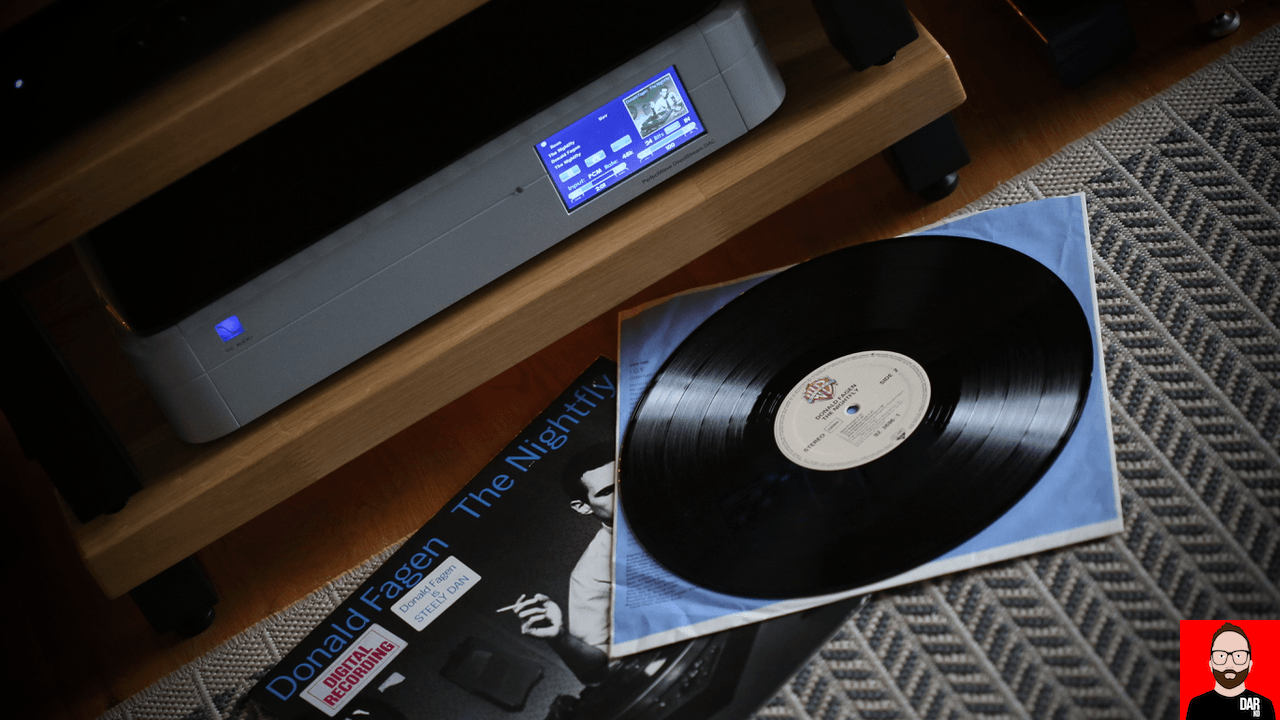 The Nightfly – it reminds me of my teenage years in which my Dad would spin his vinyl copy on a Dual turntable, through a Sansui amplifier and B&W loudspeakers, and talk of how the Donald Fagen solo debut reminded him of his teenage years. This must’ve been how I caught the ‘good sound’ bug, albeit subconsciously. That was 1982/3.

Thirty five years later and my own vinyl copy of The Nightfly wears its heart on its sleeve. A pair of labels announce the album as a “Digital Recording” – one of the world’s first – and that “Donald Fagen is Steely Dan”. I wonder what Steely Dan co-founder Walter Becker would’ve made of that.

Hearing The Nightfly played on a Technics SL-1200G fitted with Zu Denon DL-103r in 2017 puts paid to any notion that vinyl (always) sounds rich and warm. Just as I remember it, The Nightfly sounds clean and crisp, perhaps channeling both the Kennedy-era’s optimism and Fagen’s notorious in-studio perfectionism.

The polished-window vibe ofThe Nightfly’s sound is likely why it became a favourite among audiophiles. Wikipedia informs us that Clive Young of Pro Sound News called “I.G.Y.” the “Free Bird” of pro audio. I play it because I love the songs. And because it reminds me of my Dad. “I’m Lester The Nightfly, Hello Baton Rouge. Won’t you turn your radio down? Respect the seven second delay we use”. How evocative those lyrics. 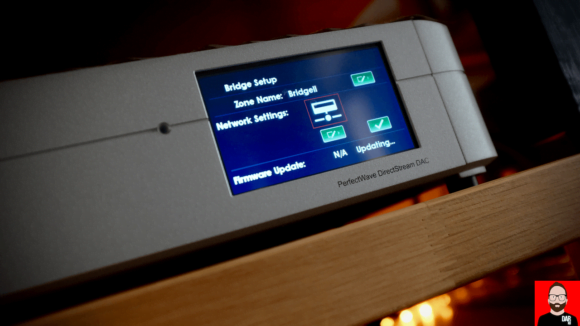 As of yesterday, anyone with a Network Bridge II-equipped DirectStream DAC from PS Audio can add support for “full unfold of MQA up to 192 kHz/24 bit” with a single click to the front panel’s touchscreen.

The PS Audio update is pulled directly from the Internet and installed upon DAC reboot. Everything is executed automatically. Would-be meddlers are advised to go make a cup of coffee whilst the Network Bridge II update does its thing.

For many listeners, MQA’s main draw card is hi-res audio streaming at a bitrate only marginally higher than CD-quality. The MQA Master file travels at 24bit/48kHz (or 44.1kHz) with the hi-res content folded under the noise floor. It is then unfolded by the end-user’s software/streamer/DAC just prior to playback.

With a computer hooked up to the DirectStream via USB and playing Tidal Master content via Tidal’s own desktop app or Audirvana+, we get only the first unfold, up to a maximum of 96kHz. The newly updated Network Bridge II gives us both hi-res unfolds. Recent remasters of David Bowie’s early-mid 70s output unpack via the Network Bridge II to 192kHz. With Tidal or Audirvana+ we only see 96kHz. 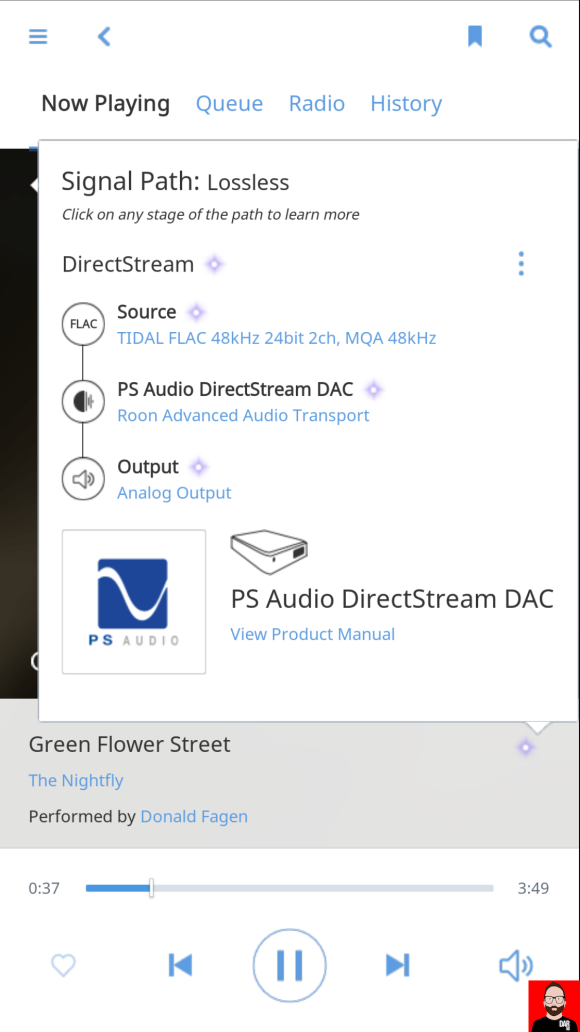 Because MQA is more than hi-res streaming.

MQA’s pre-processing of the original master promises to correct for any time-domain damage wrought by the original ADC. According to Bob Stuart, early ADCs, especially those deployed in digital audio’s early years, were less than stellar. Going deeper into Google tells us that The Nightfly was committed to the digital domain in 1982 at 16 bits with a 3M digital encoder.

“The 3M 32-track used 1” digital tape and the 4-track used 1/2” digital tape. They both ran at 45 ips. I guess 3M wanted to sell you lots of tape. The digital audio was recorded at 50kHz 16bits. There were no 16bit converters in 1981, so the 3M system used a 12 bit Burr-Brown converter and 4bits of an 8bit converter as gain-ranging to produce the 16bit results. The “brick wall” analog filters on the 3M machine hand-wound coils and took up most of a circuit board. They sounded good.”

“The biggest drawback to the 3M system was the minimal error correction. After a couple of months working on the same piece of tape, the error count started to rise above the correctable level. There were adjustments on the front of the machine to fine tune the decoding of the data recorded on tape. You could adjust each track for the least amount of correctable errors and then transfer the tape digitally to another 3M machine. You now had a clean error-free tape to work on for a couple of months.”

The above Roger Nichols quote was pulled from the Steve Hoffman.tv forum. Nichols was Steely Dan’s and Donald Fagen’s studio engineer.

MQA source file correction can, according to MQA the company, improve the master’s sound quality, irrespective of the MQA status of the DAC.

To qualify as MQA-certified, the DAC itself would ordinarily host the MQA’s minimum phase filter. This reportedly optimises the DAC’s performance when reading MQA-encapsulated content. In the case of the PS Audio setup, it’s the Network Bridge II that was “devised with consideration of the DAC’s characteristics”.

The DAC itself remains untouched. PS Audio CEO Paul McGowan says, “As we have said from the beginning of this MQA stuff, we would NEVER change the DAC to fit MQA and we haven’t. Ever. And wouldn’t. Did I say ever?” 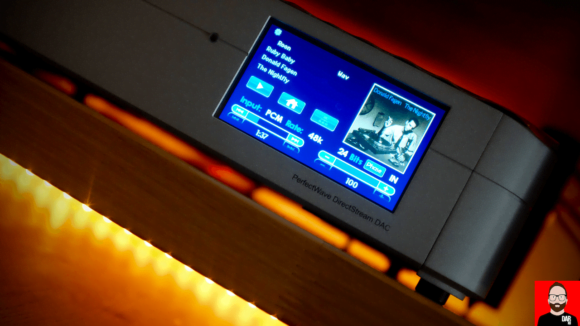 For the last 24 hours, I’ve parked my Music-First Audiophile stance to listen to The Nightfly even though my mood hasn’t called for it.

This latest PS Audio update. The number of MQA titles presently available on Tidal is limited; and I’ve already covered Bowie. The Flaming Lips? Not today. Let’s go with an old friend.

Firing up an MQA-d The Nightfly is a matter of finding it among the Tidal Master. My preference falls to to Roon whose Signal Path confirms the stream as MQA content: a 48kHz file that requires no unfolding. The DirectStream’s touchscreen tell us that it’s seeing 24bit and 48kHz – just as we expect.

For users who don’t do Roon, PS Audio have another surprise: this week’s update adds Tidal support via the free-to-download MConnect (UPnP) app.

“We figured it made no sense to go to all the expense and trouble of a full MQA unfold if there was no easy access to MQA Master files. The vast majority of MQA files available is through Tidal – so it seemed this would be the perfect opportunity to make a complete package,” says McGowan. 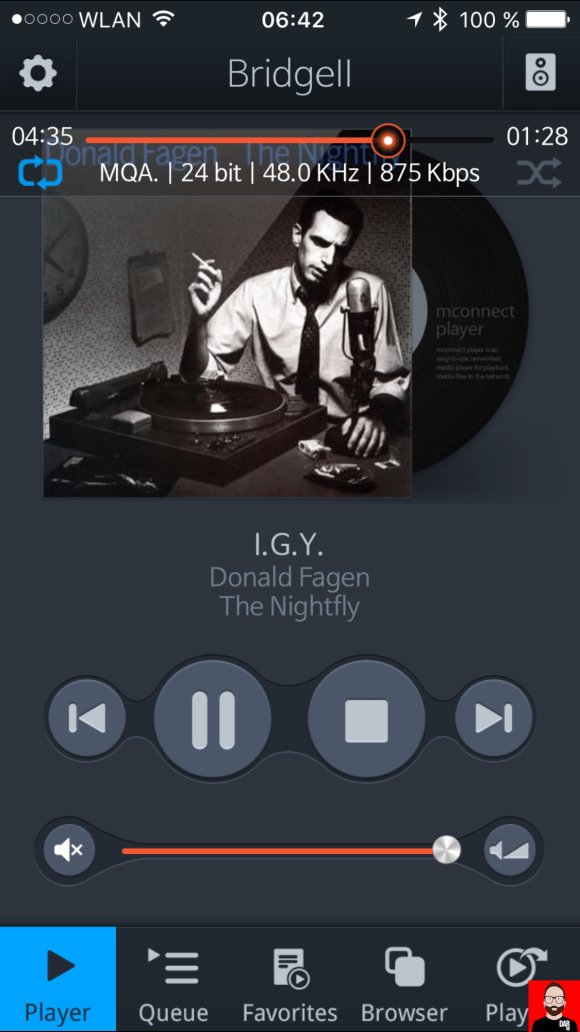 I am pleased to report that MConnect offers gapless playback and its interface is a long way from awful but some distance from great. Once logged into Tidal, be sure to specify Hifi/Master in MConnect’s settings panel, otherwise MQA Masters will remain invisible.

Search results for Donald Fagen have us seeing double: two versions of The Nightfly. The MQA version has the more sepia-toned cover art and the standard 16bit/44.1kHz (for mobile devices). Does that little boxed ‘M’ mean MQA? Perhaps. Having both makes for a side-by-side comparison. A vinyl copy on hand turns this one-on-one into a three-way.

Downstream of the DirectStream sat the over-achieving Rotel RA-10 powering a pair of ELAC UniFi BS U5. Modest hardware compared to the DAC/streamer.

Listening to The Nightfly across three versions at 6.45am had me dizzy but asking some serious questions. Questions because – obviously – I’m not privy to what went down in studio in 1981/2 – at Soundworks Digital Audio/Video Recording Studios and Automated Sound in New York City, and at Village Recorders in Los Angeles – or with Warner Bros’ handling of the masters in the intervening 36 years. I’m not a Donald Fagen provenance expert. Are you?

Why does the MQA version of The Nightfly sound more easeful, smoother and less uptight between the shoulder blades than the standard Redbook version? Surely this qualitative difference couldn’t simply be attributable to an additional ~4kHz and 8 bits (from sample-rate conversion)? But, just as surely, the two digital versions didn’t stem from separate masters; one re-mastered at the studio level and the other not?

Why also did I note a higher dose of lower treble energy from vinyl playback? Surely that wasn’t Vinnie Rossi’s LIO phono module at work? More likely the cartridge – did I need something smoother or was it just a matter of VTA adjustment? Why did the MQA take sound the richest of the three?

Why did the MQA version seem to connote more mouth movement from Fagen’s vocals than both the standard Redbook and the 88.2kHz version sitting on my Roon server? And where did that 88.2kHz version come from when, according to MQA, The Nightfly’s master is a 48kHz deal?

Most importantly, why did I find said MQA version by far the most satisfying of the three? I’m talking shades of grey; not orange vs red. The qualitative differences I hear between the Redbook take and the MQA take remain consistent with this publication’s two previous MQA listening sessions.

The majority of audiophiles would probably be happy with any of these three versions of The Nightfly heard in isolation. Were you present, you might have voted for the more overtly energetic sound of the vinyl playing by way of the Technics/Zu/Denon package – if anything, proof positive that extrapolating vinyl’s ‘sound’ from a single TT/cart/phono combination is plain silly. On the other hand, your audiophile buddy might have preferred the more perfunctory sound of the standard FLAC.

The point here is that, once again, with this one album, heard via PS Audio’s glorious D/A converter, keeping one eye on Godwin’s Law, the MQA version sounds different. And to my ears, that difference translates to better. PS Audio’s latest update lets Network Bridge II owners decide for themselves. 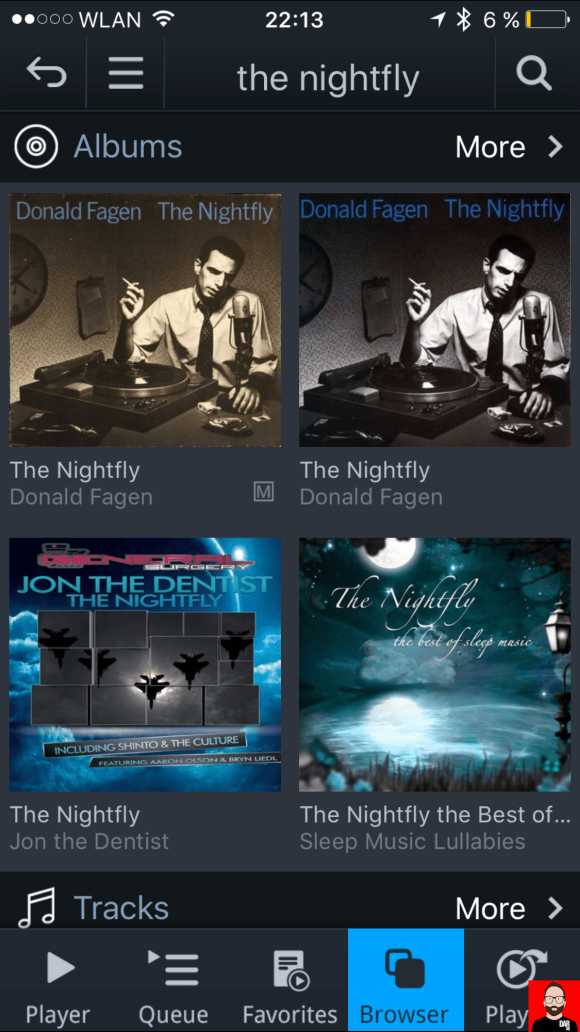 Full disclosure: MQA shouted this reviewer dinner in Munich in May: one pork knuckle and two large beers. 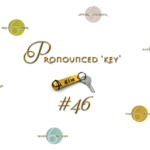 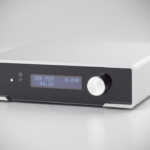