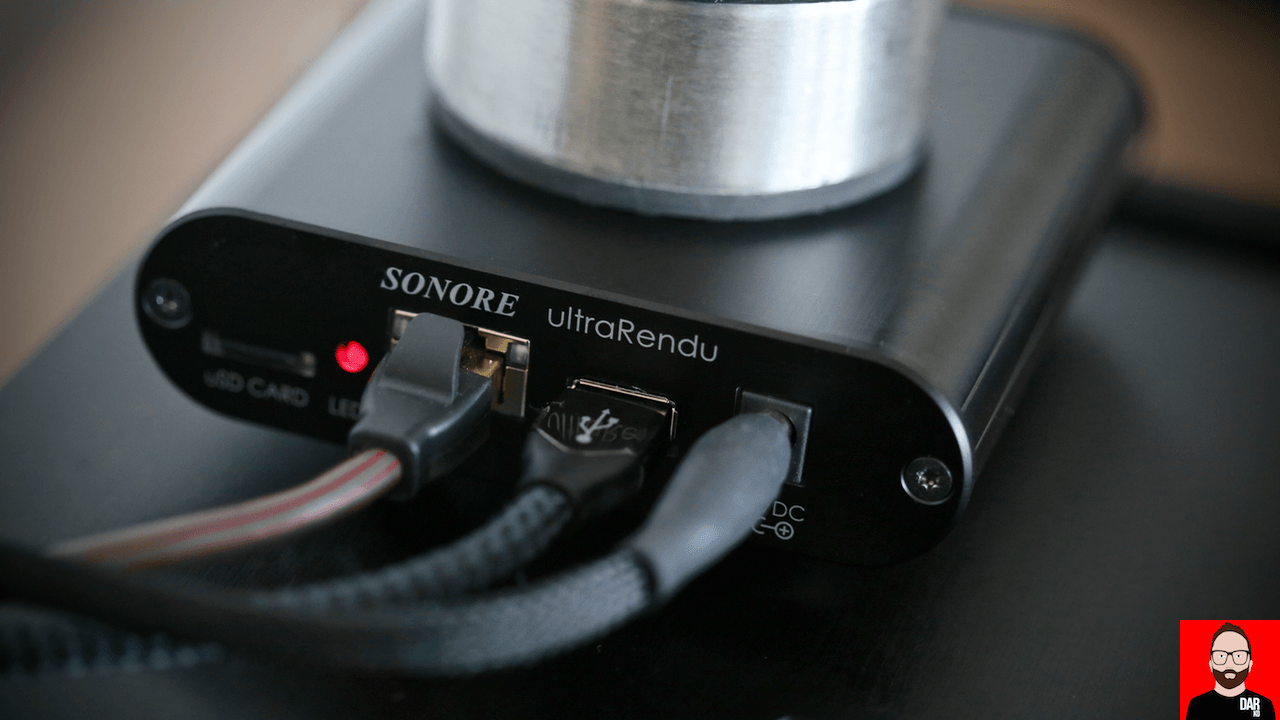 Ethernet input. USB input. No wifi. No S/PDIF. We’ve been here before. Sonore’s ultraRendu is this Florida company’s second go at a network streamer. Their first was the DAR-KO Award winning microRendu (US$640 + power supply) – catch up here.

Now comes the ultraRendu. Per Sonore co-founder Jesus Rodriguez’s recent email,: “John, we are sending you unit number one from the ultraRendu series.” Righty-O.

Quoth the Florida company’s website: “The Sonore ultraRendu project is an extension of the microRendu project that we launched over one year ago. The design is inspired by audiophile gear and meant to bring grace and simplicity to a micro computer.”

The ultra’s pricing clocks in at US$875 + power supply, for which we can BYO or opt for the US$50 iFi iPower at time of order (US only). Like the microRendu, the ultraRendu likes to see 1 Amp (minimum continuous) at anywhere between 6V and 9V.

At the DARHaus, I siphon the requisite go juice from Vinnie Rossi’s LIO via the DAC module’s (optional) umbilical. This keeps the ‘Rendu off-grid and fed by ultracapacitor power. Prior to the LIO I was using a U9 linear supply from Teradak. 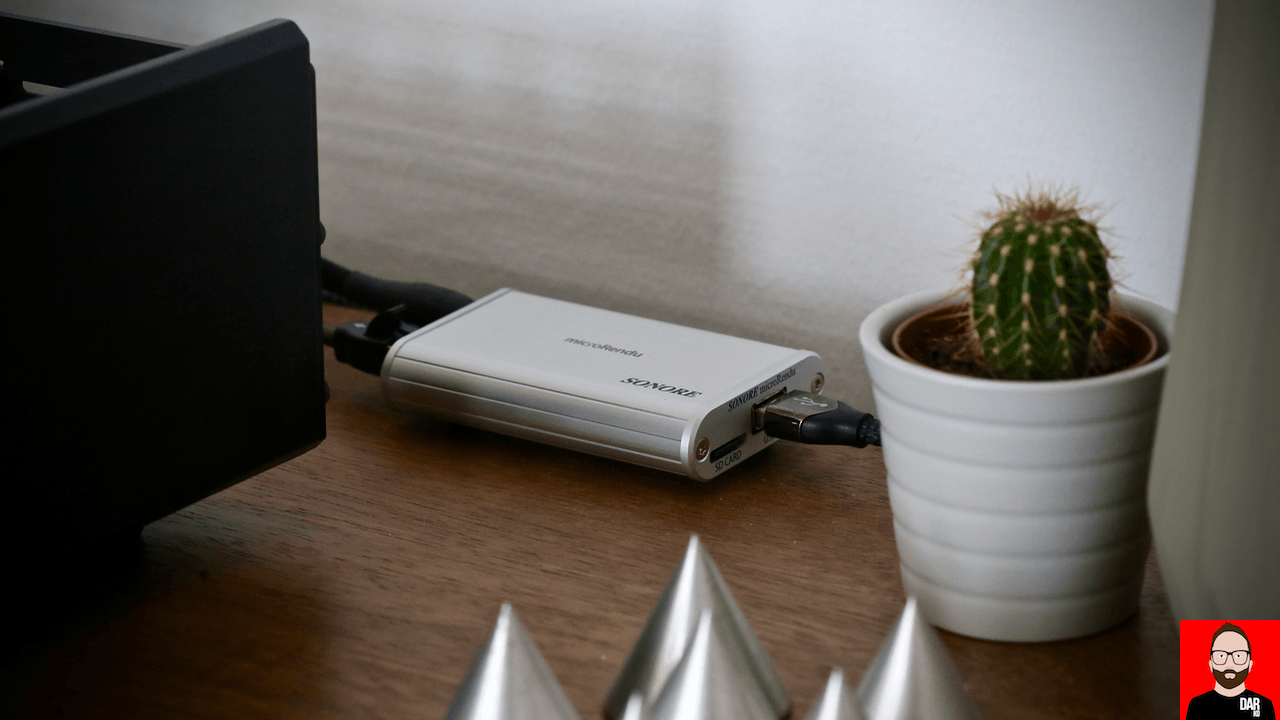 Rodriguez again: “Better sound, different form factor, matching the [Uptone Audio UltraCap] LPS-1 that a lot of our customers use.”

To this end, the ultraRendu shows up wearing a bigger, heavier suit than its forerunner. Black – not silver.

On the ultraRendu, the RJ45 Ethernet input, USB output, microSD card slot (for the OS) and power input all run along a single side. That makes it better suited to proper rack display than the micro which could/would dangle from the back of a DAC’s USB port. If you’re dropping the best part of a grand on an audio device, you probably want to show it off.

And isn’t streaming audio’s fundamental weakness a visual one: there’s just to so much to look at during playback? Whilst nothing spins and it doesn’t assist with artwork provision, we can enjoy looking at the ultraRendu’s oval-ended faceplate from the listening position, even if its overall appearance is somewhat utilitarian. The ‘rendus are enthusiast products for those who are happy to forego the high-street friendly aesthetic in order to listen at the cutting edge of digital audio.

At the ultraRendu’s heart, a multicore processor with DDR3 RAM powers a Sonicorbiter OS, network accessible from any web browser to specify one of six operational modes: MPD/DLNA, Shairport (Airplay), HQPlayer, Squeezelite, Spotify Connect and Roon.

My listening habits fall to the latter two apps. Roon and Spotify only Why? I find their user interfaces far more enjoyable than anything offered up by DLNA and MPD app developers. 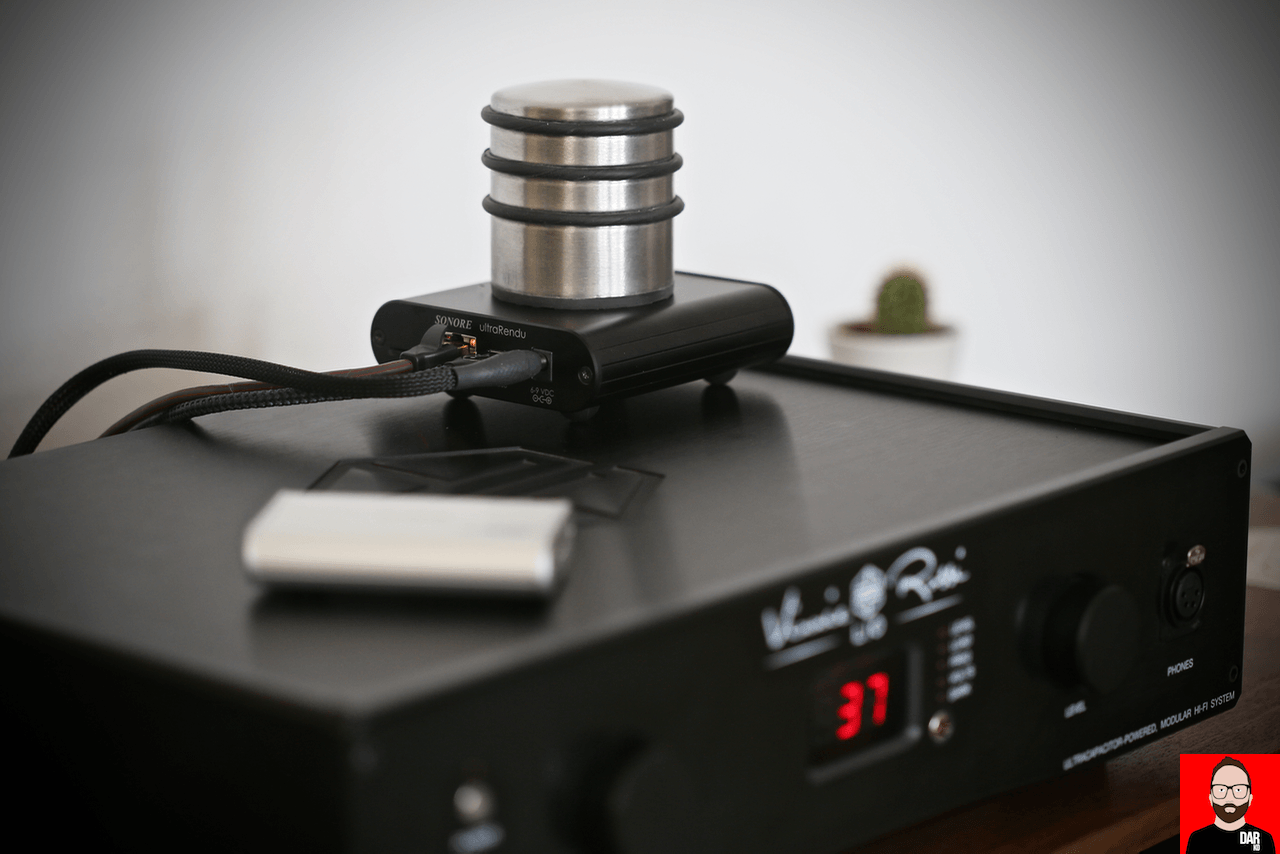 If we accept that looking at a painting or a photograph can change the way we feel, we must also accept that user interfaces with their hands on interaction – images that change as we touch them – have the potential for similar (or greater) micro-emotional alteration. 8Player and Linn’s Kazoo are functionally fine in the same way that a 3-door hatchback gets us from A to B safely and with some degree of comfort. We’re not paying for style or elegance. For that, Sir must pay more.

According to Rodriguez, Version 2.5 of Sonicorbiter OS, spilling in April 2017 as a US$20 upgrade for existing microRendu owners, was initially developed for the ultraRendu and comes pre-installed here as standard.

On the hardware front, the ultraRendu’s audiophile focus comes from “a new proprietary printed circuit board with only the essential components and some updates to match its ultra designation”, says Rodriguez.

Wanting to protect their IP from would-be copycats, both he and circuit designer John Swenson remain (understandably) cagey about the specifics. A Computer Audiophile forum post saw Swenson details the four biggest changes over and above the microRendu:

“1) Bigger size — This allows some of the other changes to happen. The microRendu was designed very small so it could fit behind a DAC with a solid adapter between them. This was done to get the highest Signal Integrity (SI) at the DAC input. Over the lifetime of the project several companies have been producing some short high quality USB cables which makes the “box behind the DAC” concept not as necessary as before. This lets us use a larger box which allows some improvements to the design.” 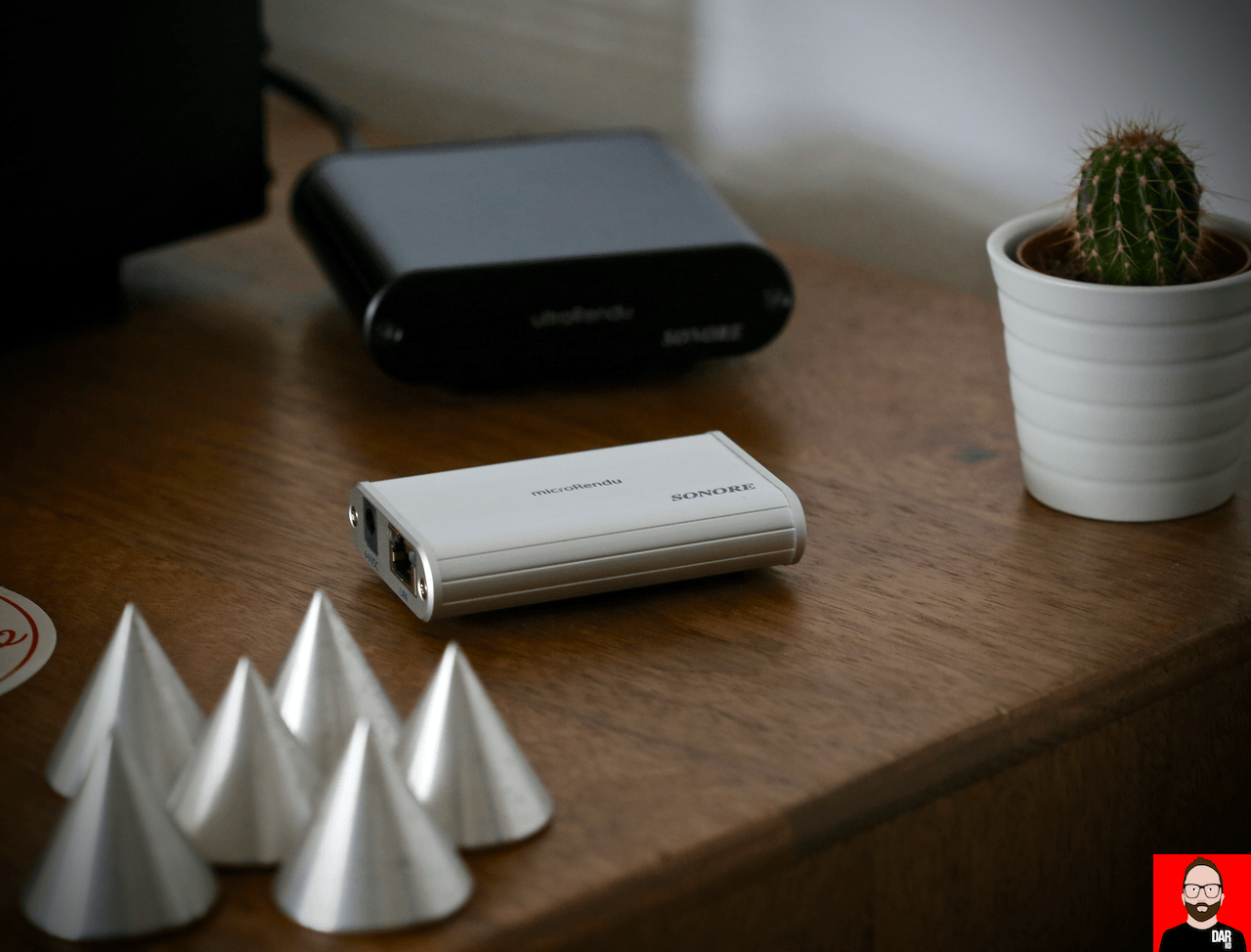 “2) Much lower jitter clock — When the microRendu project was started really good clocks were large and expensive so the choice was made to go with with a good but not best available clock. At this point we didn’t understand how critical this next step in lower noise clocks was for many USB input DACs. But now VERY low noise clocks are much smaller and less expensive than they were (still not cheap, but significantly less than before) so it was decided it was very important to use these in this design. This is probably the most important improvement over the microRendu.”

“4) Improved board layout — With a larger board we have been able to layout the processor subsystem such that the power and ground noise it generates bypasses the clock and hub circuits, significantly decreasing their affect [sic] on the output jitter.”

“#3 and #4 together prevent the power and ground noise generated by the operation of the processor from affecting the ultra low noise clock, supplying the USB output with a very low noise clock signature.”

Want yet more technical info on the ultraRendu’s internals? Good luck with that. 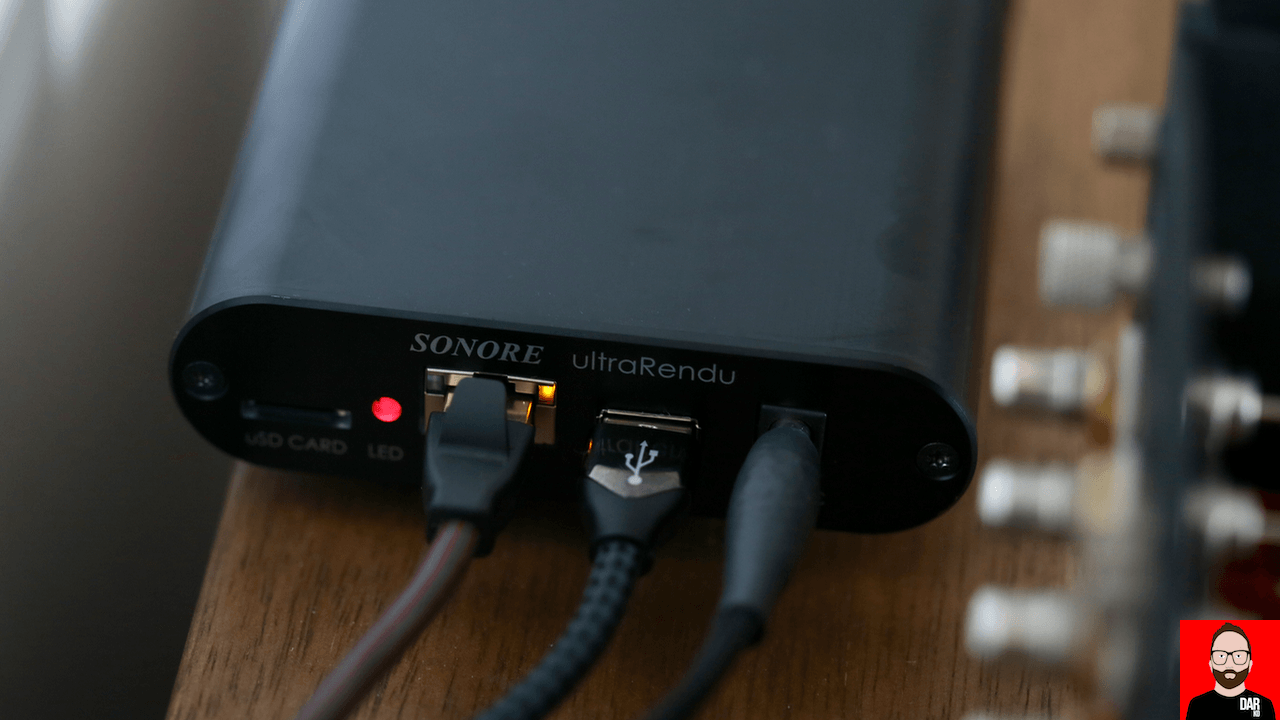 Like its predecessor, the ultraRendu’s DAC data supply tops out on PCM at 32bit/768kHz and DSD at 512. Me? I rarely venture beyond 16bit/44.1kHz Redbook with the choice often being Hobson’s.

Warp Records’ era-defining Artificial Intelligence compilation isn’t available in a hi-res format. So what? The jump in performance affected by the microRendu over a Macbook Air is greater than that heard in moving from 16bit/44.1kHz to 24bit/96kHz with David Bowie’s recently remastered catalogue.

Moreover, Sonore’s SQ elevation, a 6.5/10 to the Macbook’s 5/10, can be applied to every song in one’s digital audio library. Switching out the microRendu’s Teradak power supply for the Vinnie Rossi LIO feed nudges the microRendu up to a 7/10.

The numbering system used here is crude but, as we shall see, is included to highlight the magnitude of performance deltas between the two Sonore devices and not their absolute performance.

The scope of this review is therefore defined with a simple question: how does the ultraRendu compare to the microRendu? No more, no less. The LIO and its DAC module provide the power, the D/A conversion and the amplification. KEF LS50 and ELAC Uni-Fi BS U5 work the speaker front. Sennheiser come in with their HD800S for headphones. Cabling is all AudioQuest: Carbon USB, Cinnamon Ethernet, Rocket 88 loudspeaker.

If the original microRendu gave us dynamic enthusiasm without the nervous tension – a dialling back of the Apple laptop’s greyer tonality – the ultraRendu gives us more still. We are lent more insight into the intra-layer spaciousness that permeates Speedy J’s “De-Orbit” but also a dialling back of the tense-nervous-headache that could result from overexposure to Autechre’s “The Egg”.

OP8’s Slush from 1997 was a short-lived collaboration between Lisa Germano, Giant Sand’s Howe Gelb, Calexico’s Joey Burns and John Convertino (a member of both). Like much of Giant Sand and Calexico’s work, OP8 wants us to feel the desert through bone dry vocals and twanging guitar strings. Slush is an example of how modern(ish) music can be audio show-friendly and interesting. 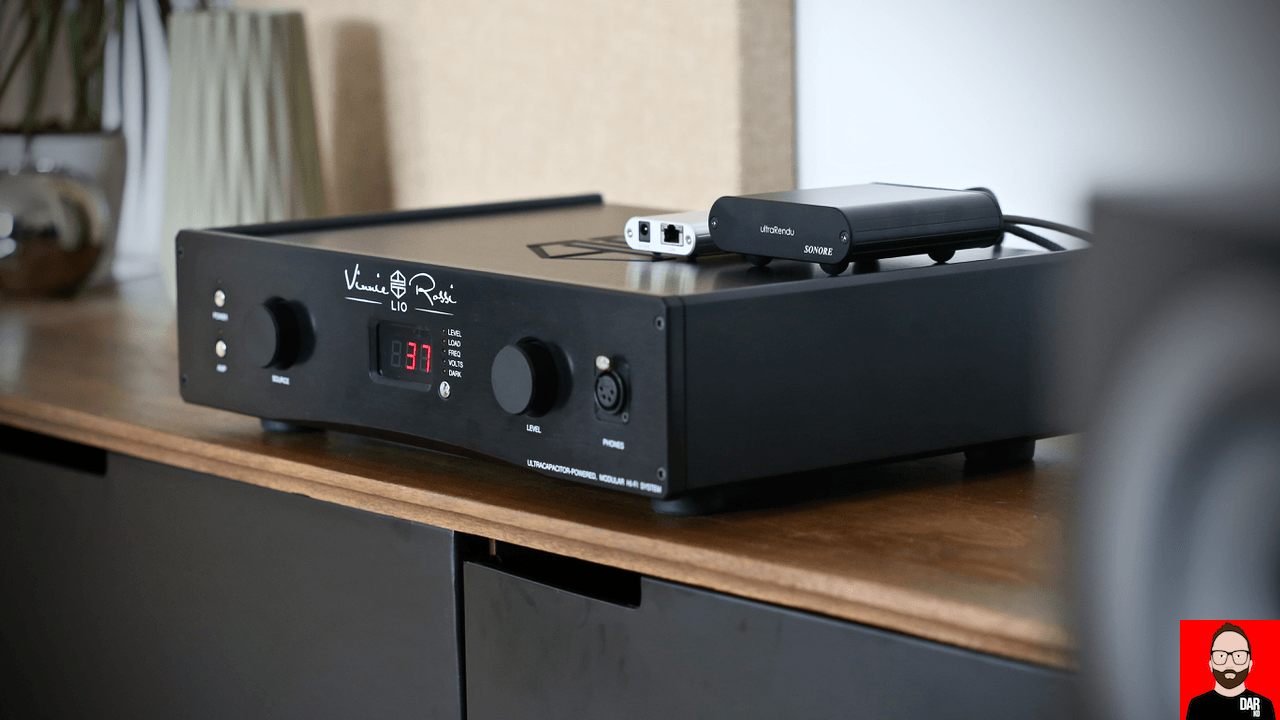 Moving from micro to ultra here, we get a slightly better sense of Arizona’s dry heat – brushes dust drum skins with more overt textural reveal. But if there’s one more obvious advantage that the ultra holds over the micro, it’s on soundstage depth. Lisa Germano’s voice pushes further forward from the speaker plane. Gelb’s back-of-the studio vocals are drawn with better definition and lateral placement to the rear.

This lends the ultraRendu the upper hand with musical intensity — again, without the side-effect of greater tension. Vocals especially, they really lean in. More so than with the microRendu.

We hear both of these qualities play out with immense satisfaction on electronic music from Berlin veteran DJ Hell. I hope the Car Car Car EP glides into your life the same way it did mine: with a mid-paced rhythmic transmission line, chrome fins and sleek hood ornament. This is the closest we’ll get to new Kraftwerk material in 2017. “Car Car Car” could easily be the Dusseldorfers’ Autobahn re-imagined for the 21st Century and boiled down to five minutes:

The remixes – seven of them at last count – are equally worthy of your attention but it’s the original version that we’re concerned with here.

The Sonore ultraRendu nudges DJ Hell’s crisp sonics into even sharper focus than the microRendu. It pushes the heavily treated vocal a step further forward, pulls a weightier throb from the pulsing bass line and oils its dynamic joints with a sense of ease that extends potential listening time by hours. Not something we might expect from a cut that’s heavy on metallic imagery – but there it is.

Returning to the microRendu after a long day of listening with the ultraRendu in place – SCB (Scuba), Jonathan Richman, Tin Man, Voiski, New Order – was tougher than anticipated. The original model doesn’t have the soundstage width of the new guy. Music loses a little of its illusory edge and isn’t quite as sharply focussed. I’m mentally more inclined to reach out and touch Elvis Costello as he talk-sings “My Funny Valentine” with the ultraRendu.

Let us keep one eye on sobriety. These improvements aren’t night and day. The microRendu isn’t ‘destroyed’ (ugh) by its successor. What I hear is evolution, not revolution. The new model steps us up from a 7/10 to an 8. That’s a bigger jump than the aforementioned power supply switcheroo applied to the microRendu.

The microRendu isn’t now a lost cause – far from it. It’s just that the ultraRendu is the superior performer, its sound quality uplift exceeding expectations suggested by the ~US$250 that separates the two. And that’s something to get excited about.

Yet another reminder that we shouldn’t drop 100% of our digital audio budget on a DAC thinking that a Mac or PC’s digital delivery is as good as any other’s. It isn’t. The microRendu offers much better sound quality. The ultraRendu more still. 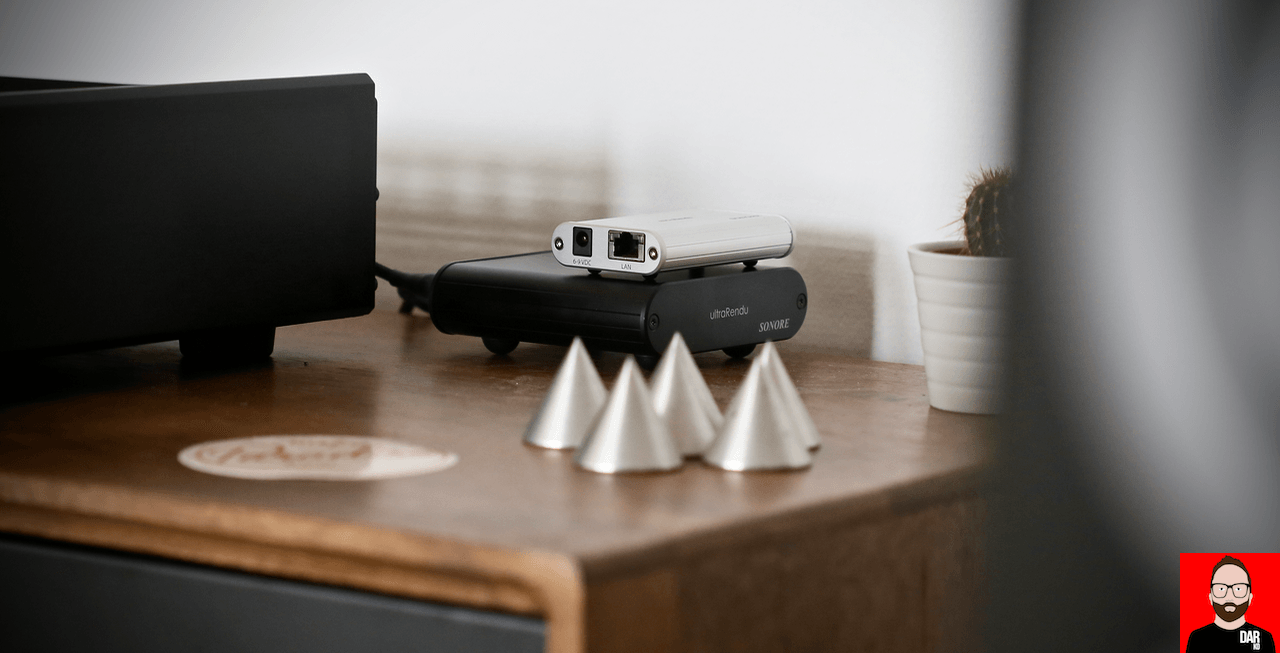 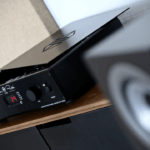 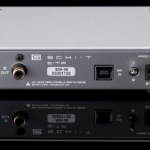