To recap briefly: the DirectStream and DSJ do it differently: digital input reception, data marshalling and – crucially – decoding are handled not by an off-the-shelf chip from the likes of ESS, AKM or TI but an FPGA loaded with code written by Hawaiian shirt enthusiast Ted Smith. And this code is field upgradable.

Improvements made by Smith to his digital filters and data handling algorithms are rolled into updates and released to DirectStream/DSJ owners via a web download for installation via SD card or, in the case of DSJ, USB stick. Thus far we’ve seen Pikes Peak, Yale and Torreys. Summit names borrowed to connote PS Audio’s aim at peak performance levels.

Today comes news of a fresh OS update: Huron is named after yet another Colorado mountain peak. This time out however PS Audio are talking revolution, not evolution, with the Boulder-based company claiming significant improvements to sonic and measured performance. Smith reportedly took a full year to recode the FPGA from scratch.

From the Huron press release: “[Huron] now up-samples all inputs to 20x DSD, up from the previous 10x, allowing more extensive signal processing than ever before….”

What does this mean for the DirectStream/DSJ listener?

In the unlikely event that you don’t dig Huron’s sound, or you have a tendency to prefer ‘good old original’ over ‘new and improved’, you can roll the OS back to a previous version with ease. Pikes Peak, Torreys and Yale are archived here. Click the ‘Product Update Archives’ tab. 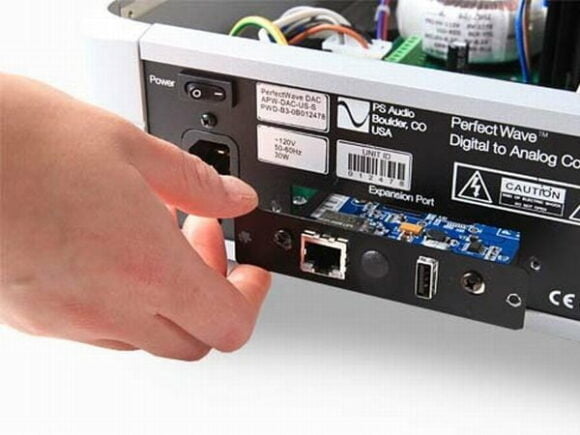 However, before doing so, be advised that Huron lays the groundwork for a forthcoming software update to the Network Bridge II that will add support for MQA and Tidal.

PS Audio’s Network Bridge II, built into the DSJ and a slide-in module for the DirectStream, will execute MQA decoding (full unfolding) and MQA rendering (DAC optimisation) – not the DAC itself. MQA’s digital signal optimisation is based upon Huron’s ‘fingerprint’ (to use Bob Stuart’s parlance) and is reportedly good for future filter updates introduced by Ted Smith and PS Audio CEO Paul McGowan.

As it was with Roon Readiness, MQA support is a two-part deal: Network Bridge II and FPGA DAC. Let’s not twist our collective, audio-obsessed-selves into a knot over this just yet. You now know everything that I know. Further details will spill as soon as the Network Bridge II software update lands in a few weeks. The comments section below is therefore reserved for those who wish to comment on Huron’s sound quality.