Munich High-End 2017 felt like a victory lap for MQA. Content licensing deals are now in place with all three major labels – Sony was announced with a whisper last week – as well as independent provider Merlin. From May 15th’s press release: “MQA and Merlin, the global digital rights agency for the independent label sector, have today announced a multi-year agreement that will support the world’s best-known independent labels to encode their master recordings in MQA’s industry-leading technology.”

In January 2017, Tidal commenced streaming of MQA Master content from Warner Music with MQA-encoded titles from Sony and Universal still to come. Negotiations are ongoing between MQA (the company) and “other streaming services“.

For the end user wanting more than MQA’s first unfold, as provided by desktop software applications like Tidal, Audirvana+ and Amarra, an MQA-certified DAC is required. Megabucks? Nope.

This week in Munich, AudioQuest announced the availability of a firmware update to their DragonFly Black and Red USB DACs: v1.06 adds improvements to Android compatibility and MQA support. In case you missed it, the DragonFly Black sells for US$99. The Red for twice that.

Future units will ship with MQA support pre-installed but existing users are first directed to the AudioQuest Desktop Manager app. Download it here.

From the floor of Munich High-End 2017, AudioQuest’s Skylar Gray walks us through the update process:

Now the wrinkle: the low-power Microchip micro-controller used in each DragonFly has only enough juice to apply MQA’s “deblurring” filter (rendering). The first (and only) unfold in this system is instead carried out by the desktop playback software. A team effort –hardware and software.

Those seeing this as the DragonFly glass being one quarter empty are reminded that this update comes free of charge. Similarly, those with no interest in MQA can still use their DragonFly Black/Red with good old-fashioned PCM (up to 24bit/96kHz). We should not forget that the majority of the world’s music supply is lossy and lossless Redbook. MQA is a nice-to-have extra for interested parties. 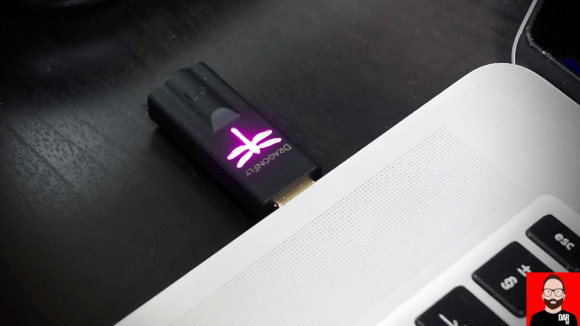