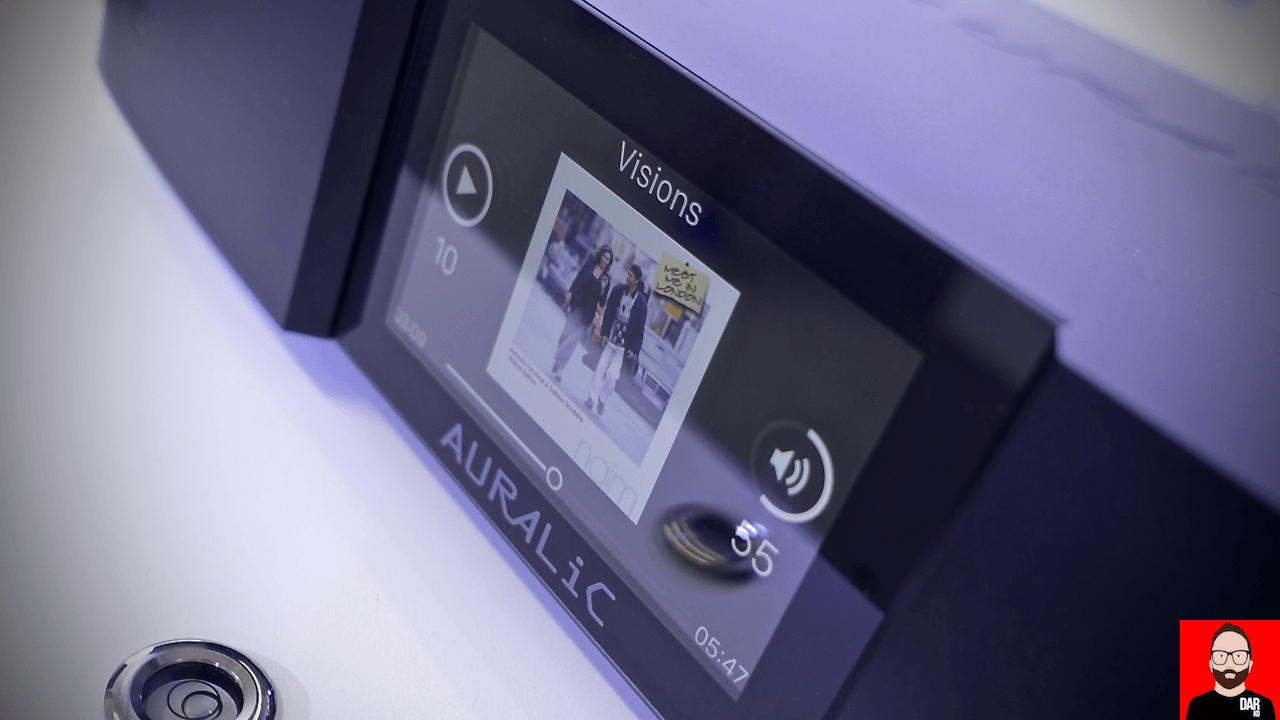 What’s the frequency, Kenneth? On the global audio show circuit, I encounter AURALiC’s Xuanqian Wang more than any other manufacturer: in Denver, in Las Vegas, in Los Angeles, in Hong Kong and in Munich. And on each and every occasion for the past three years, I have asked Wang two simple questions: 1) When will we see a MK2 Vega DAC?; 2) Will it come in black? Wang’s reply was almost always, “Awwww, c’mon – why do you want black?”. Hats off to the man for tolerating my repetitive approach to hifi journalism.

In April, I followed up with Wang on the recently announced Lightning DS v5.0 Beta. An update that brought with it a new web interface. Here’s how that email exchange played out:

JD: I only see a way to setup an AURALiC device. Does the web interface allow us to choose songs and control playback? Or is that still to come?

XW: The web control interface is for device setup only, which enables non-iOS user to setup the unit with full function. Since Lightning DS is only available on iOS platform, non-iOS user still need to use 3rd party software for playback control. For Roon customers, they can access to web interface directly from Roon software through a button, which means they do not need to know or input IP address manually in web browser. 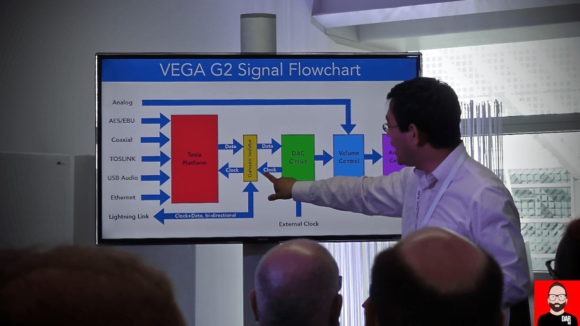 JD: With this choose-your-own-software approach, the open sourcing of the web client’s development and Roon landing on the Mini, does this mean you’re relaxing a little on which software you recommend end users use with your hardware?

XW: We never restricted customer’s choose and the company always listen to what our customer want. Our platform is getting more and more stable so we believe it is the time to add more features now. The ARIES MINI only has half system memory comparing to its big brother so there were always some limitation.

JD. You’re going your own route with MQA file handling. What motivated this move? And what can you tell us about your filter? I presume it’s only applied to MQA content and that a different filter is applied to normal PCM? What are you trying to achieve soundwise with these filters?

XW: AURALiC’s goal for MQA playback is to let our customers get the best possible sound from their existing equipment without need to purchase anything and that experience has to be free of any charge. The filters we applied to MQA file playback is a special optimised minimum phase filter with minimised pre-echo and ringing; it is quite similar to our upsampling filter but with some differences. We have already heard back from existing ARIES MINI customers whom tried the 5.0 beta firmware with MQA content and they really like the improvements we bring here. For customers who have already invested in a MQA certificated DAC, they can have an AURALIC streaming device not change the signal and have it sent to the DAC directly – they also need to disable the volume control function inside Lightning DS to make sure the MQA signal is unaltered.

JD. You’re about to introduce a new version of the Aries? What can you tell us about its tech specs and other features?

XW: Do I still need to answer this question?

As it turns out, no. 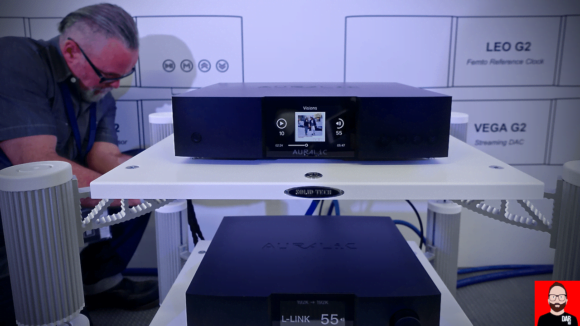 According to the man himself, Wang works (almost) every day from 7am until midnight. This explains his crazy fast email response time. On one occasion, a reply arrived at 3am. This wasn’t the Berlin-Beijing time difference at work but Mr. Wang working into the wee hours.

Wang’s show preparations are thorough. The company’s most recent press release, one that arrived a few days ahead of the Munich show’s kick off, included five (count ‘em) multi-page documents. I would have tackled them there and then but Wang had tipped me off that more was still to come. “Wait for Munich,” he said. OK.

Time to disseminate: Readers who like to know about the chip are advised that the Vega G2 (US$5600) utilises an ESS DAC chip, custom made for AURALiC and not an off-the-shelf model. Readers are cautioned that a DAC’s performance also falls to its power supply, output stage (here, AURALiC’s ORFEO) and noise shielding.

To wit, running at the heart of the Vega G2 is AURALiC’s Tesla platform: a Quad-Core A9 chip, 1GB DDR3 RAM and 4GB of storage, all running at 25,000 MIPS. According to AURALiC, that makes it 25 times more powerful than first generation Vega. 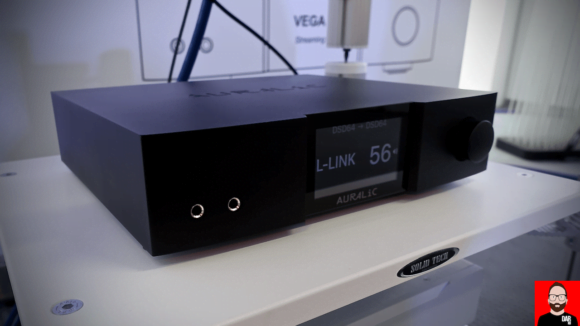 One of the biggest criticisms levelled at the original, superb sounding Vega was its lossy digital control. Well, no more. The G2’s attenuation comes from a passive resistor-ladder control that draws zero current when set. This has in turn allowed for the inclusion of an analogue input (hello turntable/phono stage) on top of the usual array of digital inputs: USB, TOSLINK, coaxial and AES/EBU.

A pair of 72fs Femto clocks, one each for 48kHz and 44.1khz sample rate familise, keep jitter to a minimum. From the press release: “The 72fs Femto Master Clock is just as quiet as it is accurate, with an extremely low -169dBc/Hz of phase noise and a 100Hz offset noise level of only -118dBc/Hz, thanks in part to its low-noise 3uV dedicated power supply.”

Also keeping the jitter-inducing EMI to a minimum is the galvanic isolation of CPU, Femto clocks, DAC chip and analogue board as well as the subdivision of 1) processing circuit, LCD display, network interface and 2) DAC, Femto clocks, analogue board between two ‘Purer-Power’ linear power supplies.

Those hoping to ditch their NAS by hooking a USB storage device directly into the back of the Vega G2, or by installing a 2.5” SSD/HDD into its undercarriage, will need to look to the Aries G2 network streamer (US$3900) instead.

Not only. The Aries G2 also promises to take the Vega G2’s sound quality to the next level by way of a still more powerful Tesla platform: “The AURALiC Tesla G2 Platform is the revamped heart of the ARIES G2, and it packs a processor that’s 50% faster than the Tesla G1 platform, with twice the system memory (2GB) and data storage (8GB) of the previous generation,” reads the press release.

The Aries G2 also sees AURALiC once again make use of sub-divided ‘Purer-Power’ supply, galvanic isolation of key circuit areas and dual Femto clocks, one for S/PDIF outputs and one for USB. 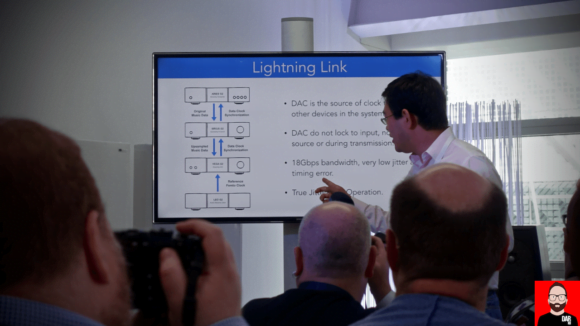 However, the big story here is the Lightning Link that joins Aries G2 to Vega G2.

Crucially, and unlike I2S, Lightning Link is bidirectional, allowing for clocking information to move from Vega G2 to Aries G2 and control data (e.g. volume control) to move from Aries G2 to Vega G2. Linked devices will appear as one in AURALiC’s Lightning DS control app.

Don’t pull out that credit card quite yet. The Aries G2 and Vega G2 will only be available from September onwards.

In the wake of their AXPONA debut in April, some have likened the appearance of the ‘Unity’ chassis, cut from a single billet of aluminium to minimise airborne vibrations and EMI, to that of Naim’s new (ahem) Uniti series of components. Fair enough.

However, once we factor in the similarly form-factored Sirius G2 upsampling processor ($TBC) and the Leo G2 Femto reference clock ($TBC), not due to drop until the end of 2017, things start to look decidedly dCS-like. That’s no bad thing: start with a DAC, then add the external streamer, upsampler and word clock as budget allows. Both Leo G2 and Sirius G2 can be Lightning-linked to Vega G2.

Sharp eyes will have caught the twin 6.4mm headphone sockets on the Vega G2’s front panel. A post-Munich follow-up with AURALiC’s German office didn’t bring forth any further details. Their lips remain tightly sealed on the what and the how.

Even if AURALiC don’t specify the world’s most sophisticated headphone amplifier, its inclusion gives the Vega G2 the functional edge over its closest rival: no, not the original Vega but PS Audio’s DirectStream DAC fitted with Roon Ready Network Bridge II. Expect to see that comparison form the core of DAR’s Vega G2 review when it drops later this year. 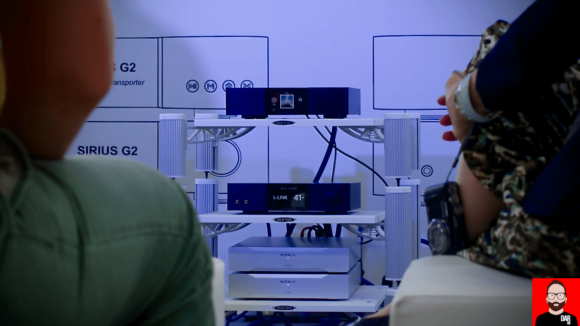 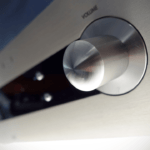 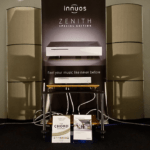