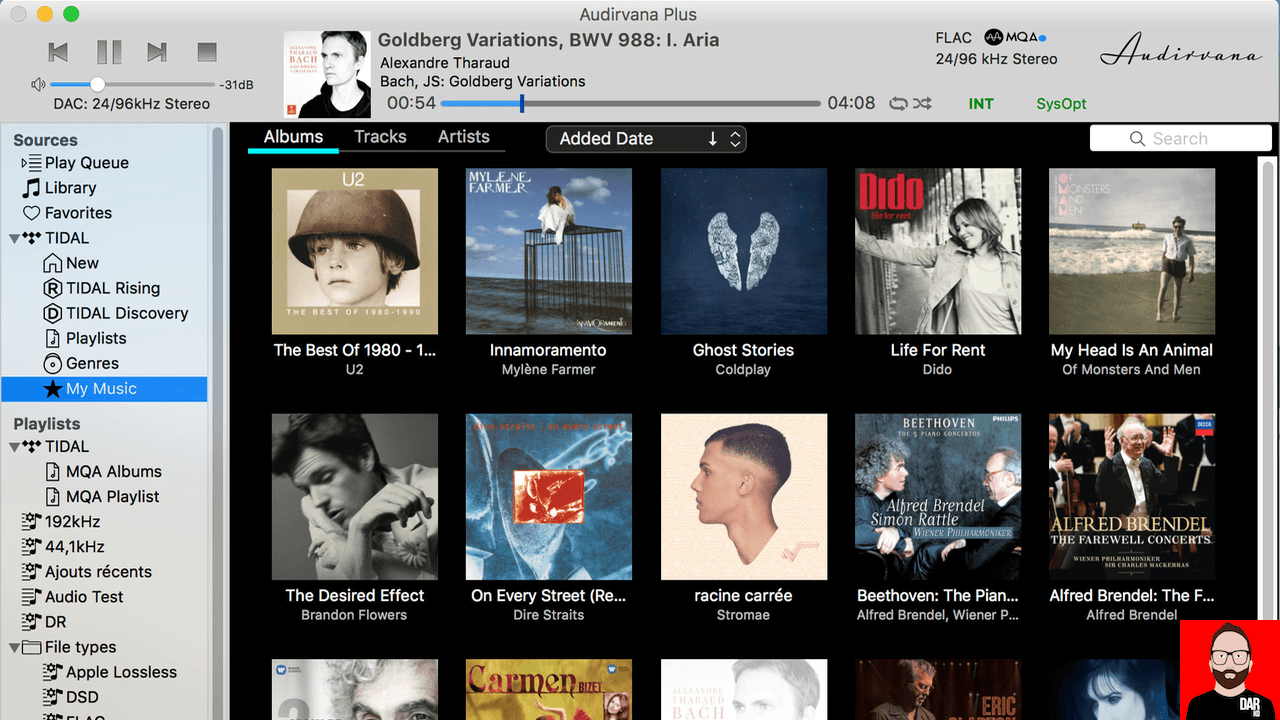 Yes, Barry, but not as you or I might drag n’ drop a hi-res file across from a LAN, from one computer to another. I assume you have read my CES coverage on this from last year? And this piece on patience? And this piece on my own early auditions?

Tidal is streaming 24bit/96kHz (and above) – that is, moving music data from their servers to your computer – using MQA’s ‘audio origami’ technique. The MQA encapsulation process folds the file in such a way that it can be stored / travel at 24bit/48kHz or 24bit/44.1kHz and then be unfolded again by the end user with an MQA-certified DAC and/or software. The result is we get to hear 24bit/96kHz (and above) but via a much less bandwidth-intensive delivery system.

Once transmitted, an MQA file’s data usage is roughly 1.6Mbps once FLAC compressed. That’s slightly higher than CD quality (16bit/44.1kHz – 1.4Mbps) but a lot less than the 2.3Mbps eaten by FLAC-compressed 24bit/96kHz. FLAC is the file wrapper here.

Not all masters leave the studio at 24bit/96kHz. Many modern indie rock releases are mastered at 24bit/48kHz. Some at 24bit/44.1kHz. MQA allows Tidal to stream the studio master irrespective of its sample rate. Ergo “Stream The Studio”.

OK, that’s how the file is packaged and transmitted. What happens once the MQA file arrives at my computer/streamer? I assume I need to some expensive new gizmo to actually play an MQA file?

Actually, no. ANY DAC can play it. It just won’t see the entire hi-res portion of the file that MQA’s encapsulation has tucked away under the file’s noise floor.

Right – so how do I access the hi-res portion?

Any MQA-certified DAC will unfold the 24bit/48kHz file back out to its full resolution – or up to the DAC’s maximum sample rate capabilities – prior to D/A conversion. MQA refer to this process of unfolding as ‘decoding‘.

For example, a 24bit/192kHz studio master folded by MQA down to 24bit/48kHz will be unfolded back out to 24bit/192kHz by the soon-to-be MQA-certified and previously 96kHz-limited AudioQuest DragonFly Black/Red.

AudioQuest has confirmed that the 96kHz ceiling introduced by the DragonFly’s receiver chip does not affect MQA content arriving as 24bit/48kHz or 24bit/44.1kHz because the MQA unfold takes place inside the DAC. The DragonFly Red and Black will, therefore, decode any sample rate dictated by the MQA studio master: 88.2kHz, 96kHz, 176.4kHz, 192kHz, 352.8kHz etc.

The Mytek Brooklyn’s USB receiver chip can already handle sample rates higher than 96kHz and will also unfold an MQA file as many times as is needed to deliver the studio master’s original sample rate.

Not necessarily, partial unfolding can also be done in software.

Tidal’s desktop app (Mac OS, Windows) will carry out the first unfold, even in the absence of an MQA DAC. In other words, a 24bit/48kHz MQA file streamed via the Tidal desktop app will reach the downstream DAC as a 24bit/96kHz file, whether that DAC is MQA-certified or not. And if the original studio master has a sample rate of 96kHz or less, you’re not missing out on anything.

So, I don’t need an MQA DAC to get the full MQA experience?

You don’t necessarily need it for the first unfold (to 24bit/96kHz) but what if you move to different playback software? As of right now, Roon passes the incoming 24bit/48kHz MQA file on to the DAC directly. Ditto Amarra For Tidal. Ditto Audirvana+ 2.x. No unfolding takes place. (This has been confirmed by each software app’s developer).

On non-MQA-certified streamers like AURALiC’s Aries, the 24bit/48kHz MQA file is also passed directly onto the DAC. Again, no unfolding takes place. Again, confirmed by the horse’s mouth.

Future versions of these software apps – and the software that powers AURALiC streamers – might execute the first (or even second) unfold. We don’t yet know for sure. Patience is required.

[Side note: The Bluesound Node 2 houses an internal DAC and is already MQA-certified.]

I saw your previous post about MQA support coming to the next major release of Audirvana+. Do you know when and how much the upgrade will cost?

No and no – sorry. For now, you’ll need to live with v2’s MQA’s passthrough which only works if you’re not using Audirvana+’s volume control or DSP functionality.

(Presumably) because DSP and volume controls mess with a file’s bits. A DSP-d MQA file will, therefore, fail to authenticate with any downstream MQA DAC. Authentication via light (green or blue) is an MQA DAC’s way of telling us that the studio master has reached the DAC fully intact. 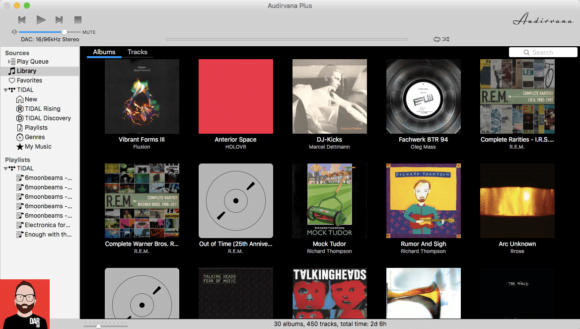 OK – so why are Roon users and the like waxing lyrical on forums already about the wonders of MQA?

Possibly because they are hearing what MQA does at the studio end: according to its co-inventor Bob Stuart, MQA can correct for the time domain smearing caused by the original A/D converter.

Even if you don’t have an MQA DAC and you don’t have software that executes hi-res unfolding, an uptick in sound quality might still be heard, especially on a more resolving hifi system.

Let me ask it another way then, JD: if Tidal’s desktop app handles the first unfold and the A/D is corrected at source, why on earth do I need an MQA-certified DAC?

Because you want the second and third unfolds… and also because of MQA’s third point of sonic amelioration: the MQA code that sits on a certified DAC’s USB receiver chip can pre-emptively correct for the DAC chip’s own time domain smearing. MQA call this process ‘rendering’.

Ah OK – so MQA isn’t only about reducing the bandwidth required by hi-res audio streaming (and Tidal’s file data storage costs) but also about correcting the time domain blurring caused by the A/D and the D/A? 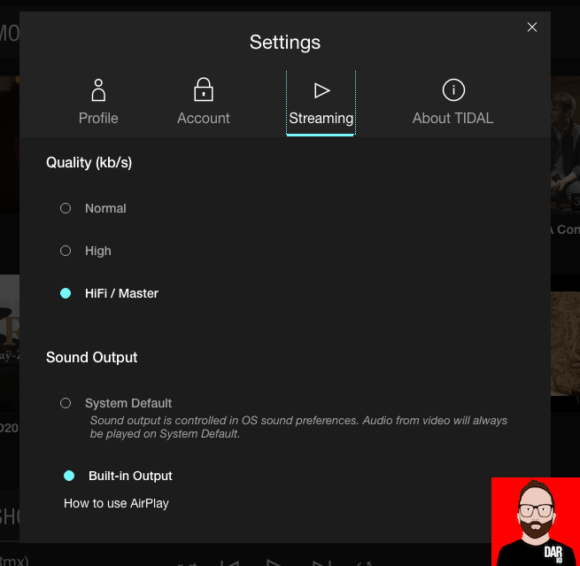 OK – how do I get going with MQA on Tidal?

Firstly, you need a Tidal Hifi account – the US$20/month one. Once that’s running, click to Settings → Streaming and check ‘Hifi / Master’. This will ensure Tidal streams MQA content to all your desktop apps and that Tidal’s desktop app will carry out the first unfold.

I’ll be getting a Meridian Explorer2 soon I think. What happens then? I mean, how do I tell the Tidal app that my DAC will be doing all the unfolding from thereon in?

Go back to Settings, select your (Meridian) DAC’s settings (click the wheel) and ensure that the three checkboxes – Exclusive Mode, Force Volume, MQA Passthrough – are all checked. 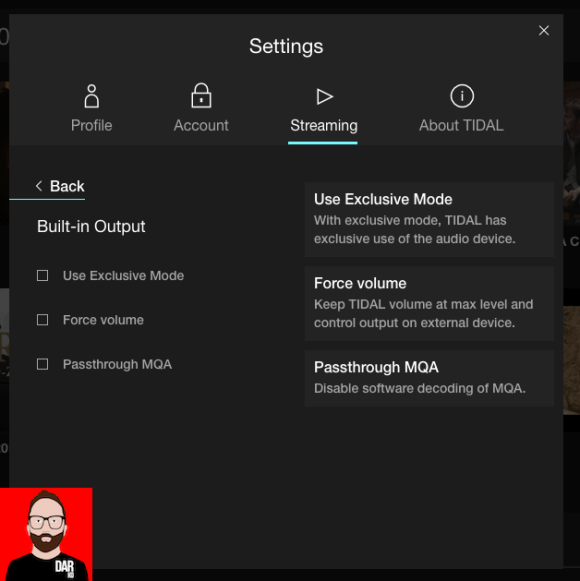 Can I stream MQA via Tidal on my smartphone?

Nope – not yet. I’m waiting to hear if Tidal’s iOS and Android apps can still ‘see’ the MQA content even if no unfolding takes place in the apps itself. But can you imagine what might happen once Tidal enable MQA on a smartphone: hook in an AudioQuest DragonFly Black or Red for the full MQA experience whilst out in the street? That’d be sweet, right?

I guess. But hi-res isn’t a panacea for a poor recording or master though, is it?

No, it is not. A bad master cannot be corrected by MQA and a nicely mastered file streamed via good old Redbook will, all other things being equal, sound better than a dynamically compressed master streamed via MQA.

Beware of those now kicking Redbook and CDs as a means to sell us on the benefits hi-res audio.  Many consumers won’t have the hardware to resolve the improvements. Many more won’t even care. Also keep in mind that “Stream the Studio” and “As the artist intended” are little more than catchphrases dreamed up by marketing departments. 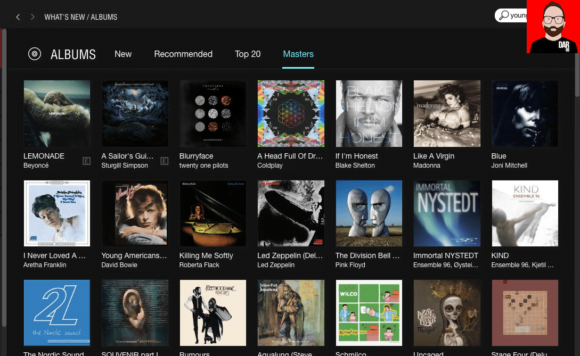 I assume it’s just the usual audiophile recordings get another belly rub from MQA on Tidal?

Actually, Barry, it’s not. The likes of Beyonce and Jason Derulo sit beside Phil Collins and The Doors. Click to What’s New → Albums → Masters to see for yourself. AudioStream claims that Tidal are sitting on 30,000 MQA files but it seems they’re releasing them unto the wild in a piecemeal fashion. Around 500 albums have thus far emerged.

True that. I’ll be sinking my teeth into some MQA-d David Bowie, Tom Waits and Talking Heads instead; a pity Fear of Music is MIA in MQA. Perhaps it will arrive eventually. Tidal are adding new content daily. Really looking forward to Neil Young’s Harvest Moon, if and when that drops too.

Over and out – until next time… 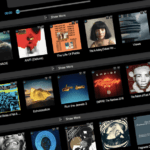 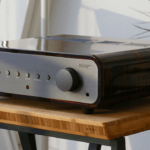