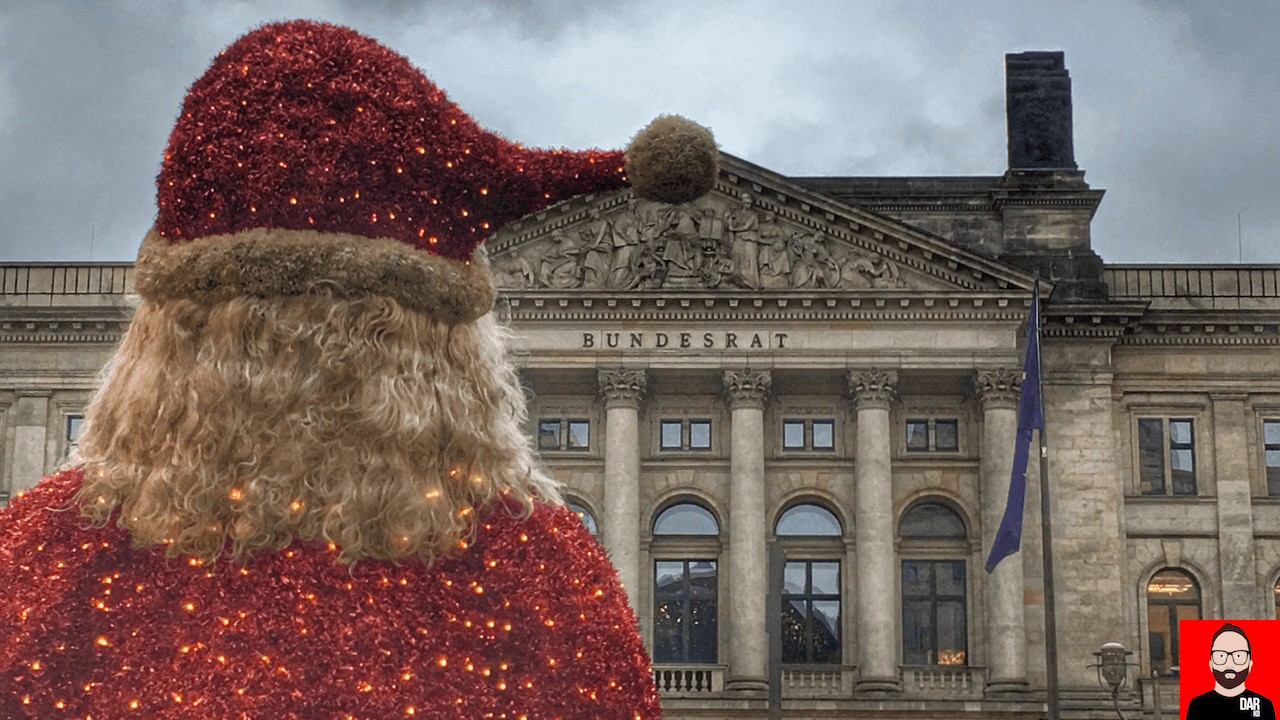 Audiophiles – be honest: few of us would entrust hardware purchases to significant others without make/model specificity or a good deal of hand-holding. What would you therefore buy for yourself this holiday season? Here, a handful of suggestions: 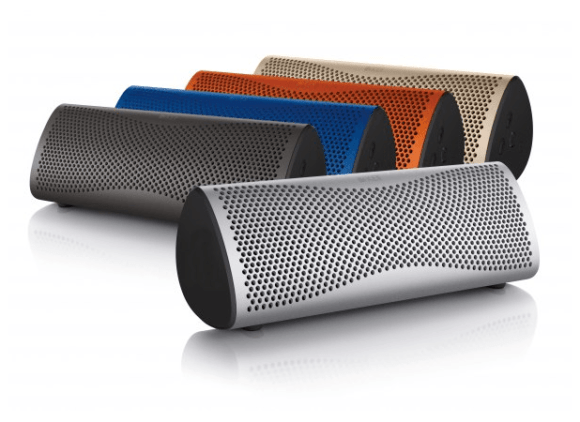 One of the few Bluetooth loudspeakers that looks and feels as though it’s made for adults (and with a price to match), the MUO is weighty in hand and sounds pretty darn good considering the form factor. Some clever internal sensor and DSP trickery (see here) means the KEF mini will sound its best whether sat horizontally or stood vertically. For the audiophile who spends more time than s/he’d like in hotel rooms or at the office. RRP is US$349 but head to Amazon.com right now for US$50 off. Those with deeper wallets can buy two to create a stereo pair, however… 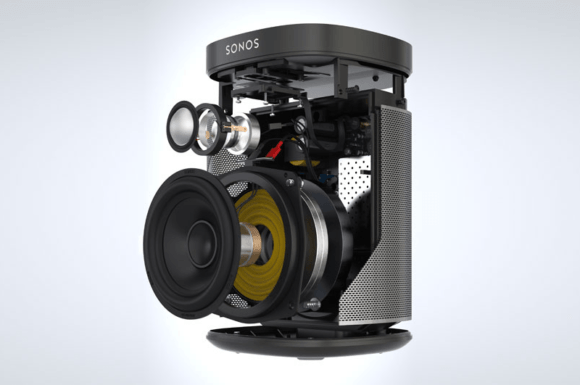 If you don’t need your speaker to travel with you, Sonos’ entry level model is a more cost effective solution at home or at office. No Bluetooth here – streaming comes via the LAN. The upshot is that Sonos have pre-baked almost every music streaming service under the into their range of control apps: iOS, Android plus Windows and Mac OS. However, proper audiophilia (in this commentator’s book) starts not with this codec or that amplifier but with full stereo separation: left and right channels sat in either corner of one’s desk or at either end of a credenza/sideboard. A pair of Play:1 can be had for less than US$400. Take their sound quality further still by using Sonos’ Trueplay app to DSP-tailor the Play:1 system’s output according to the listening environment. 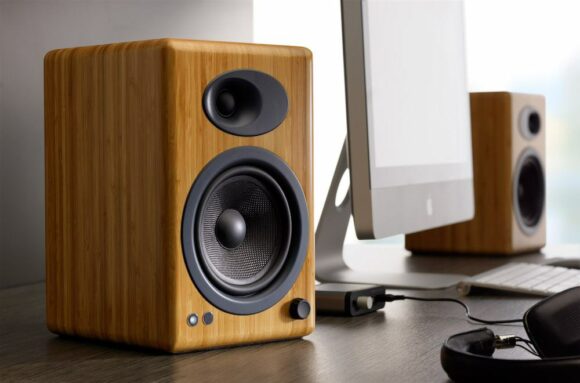 Despite 2015’s introduction of the HD6, a pair of active loudspeakers that come loaded with D/A converter and aptX Bluetooth reception, my favourite Audioengine active speaker remains the A5+. There’s no streamer and no DAC – you’ll need to BYO – but a pair of these bad boys will deliver a fuller, richer sound with superior tonality and dynamics than the aforementioned KEF and Sonos put together. The A5+ are available in black and white finishes but my vote goes to the bamboo. 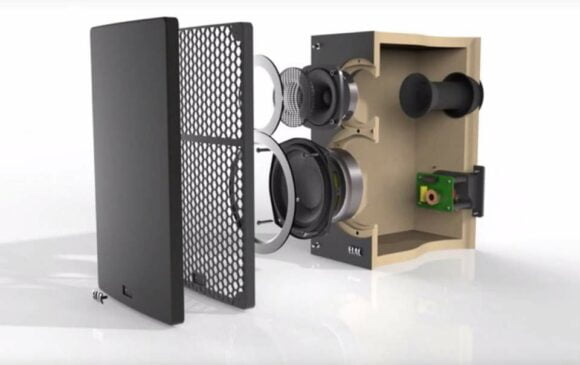 On the passive speaker front, impossible to ignore are Andrew Jones’ first range of passive loudspeakers for ELAC, ergo Debut. Jones has previously designed high-end loudspeakers for TAD and KEF. The ‘5’ here refers to the Kevlar mid/bass driver’s diameter. Don’t let these speakers’ vinyl wrap finish fool you – the Debut B5 are a seriously good loudspeaker for their asking price. Of course, you’ll learn of ELAC’s entry-level derived bang for buck supremacy the hard way when you get them home and commence the hunt for stands that will do them justice. With one eye on the wallet, check out Atacama’s Nexus range. At time of writing, the larger Debut B6 are selling on Amazon.com for the very same price as the B5: US$229.

On a tighter budget? Consider the Pioneer SP-BS22-LR, also designed by Andrew Jones.

Gone passive? You’ll need an amplifier. And if you’ve blown your budget on loudspeakers and stands, (perhaps) the cheapest, least terrible way to get up and running with music is this Tripath design from Lepy. It looks as Chinese-made as the brand name (formerly Lepai) and bargain basement pricing suggests: bright blue LEDs adorn a brushed aluminium faceplate. ‘Round back, banana plugs need not apply – the clip connectors are for bare speaker wire only. Soundwise, the little Lepy is a long way from a disaster. It’s slightly thin on acoustic mass and doesn’t come close to the much bigger, more natural sounding integrateds from the likes of Rotel or Cambridge Audio but it is perfectly listenable whilst you save for something better. Talking of which…

My local big box retailer – Germany’s Saturn – can’t seem to keep this model in stock. Demand apparently is off the dial. It’s easy to see why: a What Hifi Product Of The Year 2016, this entry-level integrated from the Japanese giant pushes 40wpc into 8 Ohms whilst also offering internal circuitry for digital and vinyl front ends: a hi-res capable Wolfson DAC and an MM phono stage, all for a buck less than three hundred US dollars or ten Euros short of a full two hundred. Defeatable tone controls sit up front for when you don’t want to disturb the downstairs neighbours – dial down that bass. The 6.4mm headphone socket is for when you want to give them a break completely.

If your amplifier or active monitors don’t come with a DAC, you’ll need to supply your own. Dongle DACs are ten a penny these days but the AudioQuest models, the Black being the most affordable, stand head and shoulders above the competition: compatibility with computers AND smartphones, once you’re done at the office, you can connect the Black to your iPhone with an Apple Lightning to USB adaptor or (supported) Android device via OTG cable. Firmware upgradability means you won’t have to buy a new DAC should AudioQuest choose to support a fresh file formats or if Gordon Rankin’s Streamlength™ code – the software engine room of the DragonFly Black – enjoys some tweaks.

The Fulla was once a dongle DAC. But no more. For 2016, Schiit have reimagined it as a desktop DAC. And headphone amplifier. And physical volume control. This is what you should buy when portability isn’t a top priority. When instead you want a USB powered solution that’ll run rings around the SQ of your laptop’s 3.5mm socket. Never have we been offered so much for so little. More info can be had right here. 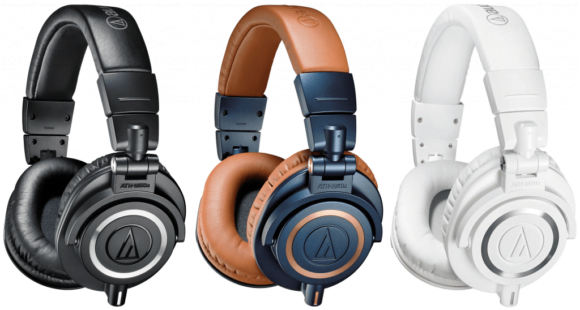 An absolutely top notch pair of closed back headphones (for the money) that sound great even when partnered with the more modest DAC and amplification circuitry found in the average smartphone. Despite the preponderance of plastic throughout, these Audio Technica ‘phones tip the scales at almost one quarter of a kilo. One word: robust. They also offer better than average isolation from external noise. Bloated bass is mercifully absent leaving behind a sense of neutrality that many listeners find appealing, especially when fed by better amplification like the AudioQuest DragonFlys or, up on the desktop, the Schiit Fulla 2. The included detachable cables – a choice of coiled or straight – help sweeten the deal. 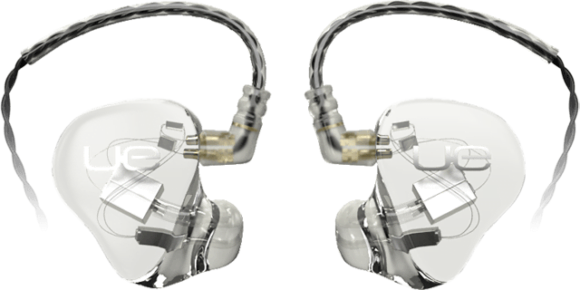 All other things being equal, custom fit earphones will sound better than any universal fit equivalent. With the earphone 3D-printed as a bespoke fit for your ears (and your ears only), noise isolation is improved considerably. This allows us to hear more of our music without having to jack the volume. Ultimate Ears have lowered the point of entry into the custom world with this dual balanced armature driver model and the turnaround time, from digital earscan to IEM delivery, is some of the fastest in the business. 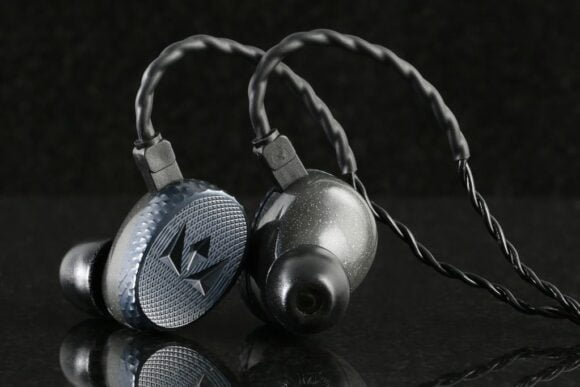 Alas, things rarely remain equal. One of the most prestigious names in the IEM business, Noble Audio, earlier this month announced their most affordable universal IEM to date: the X – a twin BA model loosely based on the (now discontinued) Savant. Price to you: US$250. But there’s a catch: these IEMs are available via Massdrop and Massdrop only. The first batch are set to ship in March 2017 and if you weren’t aboard that first ‘drop, you’ll need to sit tight for the next one. That puts a bit of dampener on seasonal satisfaction but good things come to those who wait (and all that). 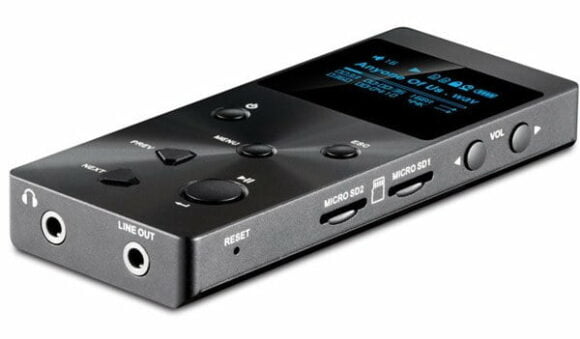 For portable DAP action at the affordable end of the market, my hat tip goes to the xDuoo X3 from China. A first brush with this player at e-earphone’s Potafes in December 2015 had me excited by its small form factor and twin microSD card slots but ultimately disappointed by its lack of gapless support. Rockbox to the rescue! To these ears, DAP manufacturers have their messaging all wrong. They talk of their players’ hi-res file compatibility before mentioning the audible improvement for every type of digital file, even criminally overlooked Redbook (CD quality). When loaded with FLAC files, the xDuoo X3 not only sounds quite a bit better than an iPhone 6S Plus, it outperforms the Astell&Kern AK Junior. 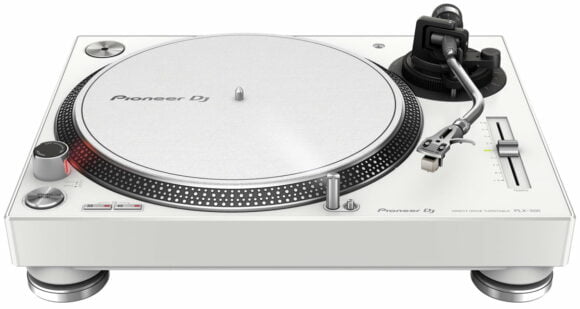 Buying a turntable for a loved one this holiday season is the equivalent of attaching a drainage pipe to the bank of the recipient’s bank account – make sure s/he has the funds to TOTAL cost of ownership. The ‘table might only run you a few hundred dollars but records – records that are newly released and/or popular (and not used copies of Nana Mouskouri or Neil Diamond Best ofs) – they sell for quite a bit, actually: between US$20 – 30 a pop. Think about it this way: the Pioneer PLX-500 is decent enough sounding turntable that sells for the same price as a dozen (count ‘em) new vinyl records.

That said, I dig this Pioneer because, compared to similarly priced models from Pro-Ject and Rega – they who subscribe to belt driven, low mass designs at this price point – it’s built like a Russian tank whilst delivering direct drive’s generally superior speed stability. The PLX-500 also feels more like US$350 worth of turntable than a Debut Carbon or a P1. And it’s available in white (as well as black). Most importantly of all, Pioneer don’t ask that you lift the platter and move the belt each time you want to switch from 33rpm to 45rpm and back again. You just push a button and spin again.

Did I mention that the Pioneer also features a defeatable MM phono stage so that it’s ready to connect to any integrated amplifier, even the Lepy. 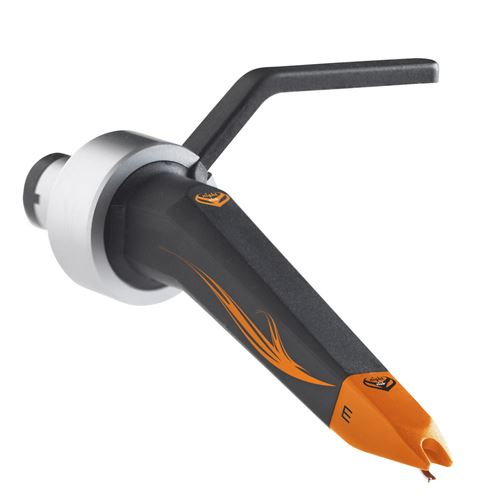 The stock cartridge supplied with most entry-level turntables – e.g. Ortofon OM5, Rega Carbon – they ain’t all that. If anything, they do a gross disservice to the ‘table to which they are installed. If we want to say something positive about the factory-fitted cartridge that ships with the Pioneer PLX-500, we’d say that it plays records. The Ortofon Nightclub MKII is a major step up. And because it’s a DJ-style ‘Concorde’-nose cartridge, the whole shebang clips directly onto the arm just as a headhsell would. No need to fuss over alignment, overhang or azimuth – it’s all taken care of. Only tracking force and VTA require attention during installation. This might be a DJ cartridge but that’s no reason to turn one’s nose up at this price point: greater insight, more rhythmic poise, superior dynamic swing and an extra dollop of gain from its 8mV output. In a word: energetic.

Often more controversial than cables are isolation platforms and pucks. Devices like these, that keep unwanted vibrations away from our electronics (or turntables), rarely sell for peanuts. What’s a frugal-phile to do? Hit up IKEA for an APTITLIG chopping board – see here for why – and, if you’re feeling extra fancy, drop some Sorbothane hemispheres underneath. 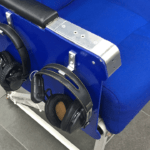