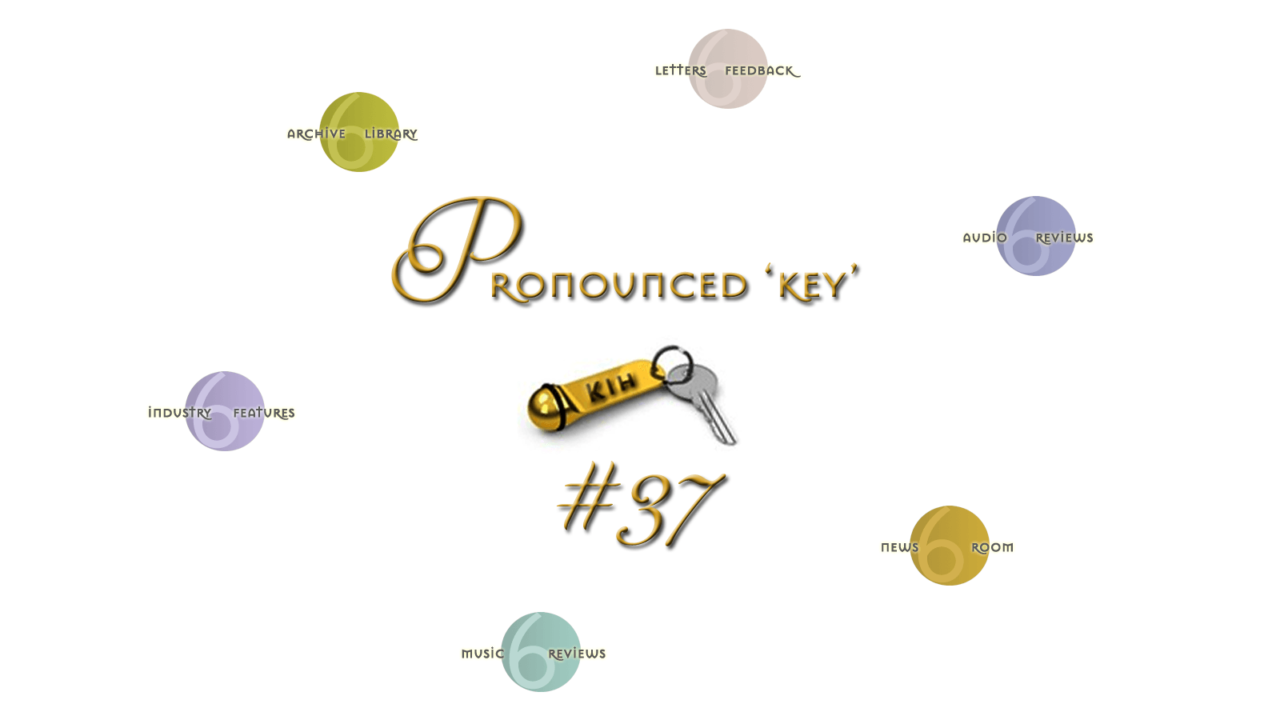 Funking hey. Check out the Heco Direkt Dreiklang (that’s German for tri-sound to point at being a scaled-up 3-way over the original 10” two-way Heco Direkt). Whatcha reckon its driver diameters are? Here’s a hint. The midrange is an 8-incher. That makes the about twice-as-wide woofer a—gasp—15” monster, baffle width a mega 70cm! Add claimed 98dB efficiency, 19Hz- 30kHz bandwidth and wallet pinch of €7’000/pr.

Which segues neatly into today’s theme. Big-driver sound. Audiophilia has its own form of political correctness. Nowadays, big woofers seem associated mostly with boom and bestiality, testosterone poisoning and doped-up raves. Even big midranges have fallen out of favour. 5.25/6.5” two-ways are far more common than a Heco Direkt or Zu Druid V whose 10” mid/woofers mate to horn-loaded or compression tweeters to appear like last century’s big-bore Hemi throwbacks when gas was cheap. 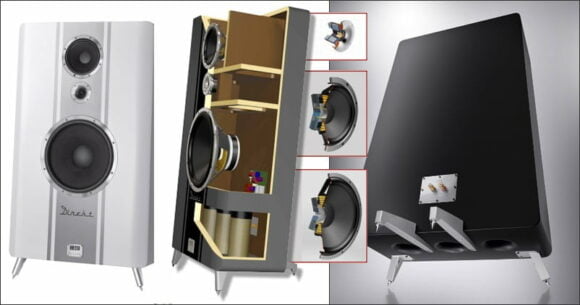 The most obvious reason against hifi hemis would seem to be a prevailing preference for smaller speakers; or at least smaller- looking boxes which disguise their cubic volumes behind narrow baffles. Essentially they rotate the Dreiklang/Druid concept by 90° on a lazy Susan. What was wide goes narrow, what was shallow goes deep. This rotation doesn’t eliminate the need for LF displacement. It simply multi-parallels small woofers which either fit the narrower baffles; or locates them in a force-cancelling array on either side as Joachim Gerhardt pioneered at Audio Physics.

Taking that narrow multi-parallel concept to the extreme was Anthony Gallo’s spindly Reference 5ls of yore. That augmented its frontal artillery of 8 mids alternating with 7 tweeters with a clean dozen of 4-inch ceramic-coated aluminium woofers on the back. Just so, their official -3dB spec was 36Hz, not the 19Hz the triple-ported Dreiklang 15er promises. The rationale for multi-paralleled drivers is higher sensitivity, lower excursions for equivalent SPL, increased motor control and, from the last two items, greater speed and precision. Yet looking at the Gallo spec, we see a typical 90dB efficiency figure. Contrast that to the Dreiklang’s or Druid’s 98dB. Not everything is like its propaganda would have us believe. 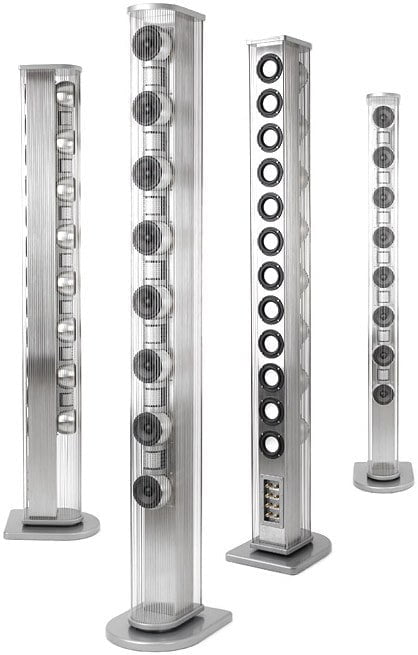 Having reviewed the 2-way Direkt floorstander and Aperture’s Kalya 8” two-way monitor whilst now owning and loving the Druid V, I do have an opinion on the difference which “unnecessarily” bigger drivers make. I wrote unnecessarily because it’s not about bandwidth. Today’s long-throw drivers optimized by software-modelled port loading needn’t be huge to go low and even loud. To repeat, to go low per se doesn’t require big diameters. Just so, there’s a difference in textures and sensation. Call it tone and shove. Increasing a mid’s diameter is ultimately limited by its need to meet a tweeter. Typically that’s a 1-inch dome which can’t reach too low before there’s a gap with the midrange. Still, any number of “vintage” 10-inch or even 12-inch two-way towers exist to demonstrate just how seamless a meet can be achieved, even if often not with run-of-the-mill drivers.

Comparing our Druid’s 10.3” widebander to the 6” ceramic Accuton mid/woofer in our Albedo Audio Aptica two-way tower cleverly loaded by a transmission line modelled in custom software, bandwidth is surprisingly comparable. With tailwind from correct setup and proper amplification, it’s in fact the Aptica which can outreach the Zu on raw extension. But covering equivalent bandwidth with very different weaponry makes decisive differences to the listening experience. Here it even includes a big offset in efficiency (85dB vs. ~96dB). A big sonic offset is the behaviour in the power zone of the upper bass. It’s related to what musicians call the engine room of a band. It’s the beat’n’bass makers of percussion and stringed bass which generate a groove’s energy and propulsion above which harmonies and melody occur. Here the greater cone area of big woofers or mid/woofers moves more air and does so from a single point. That translates into greater visceral punch. And that runs our engine room at higher RPM as it were. 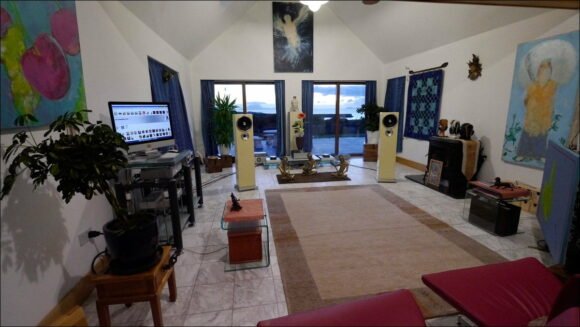 That’s obviously less noted with string quartets which feature no percussion to begin with and which normally use their cello con arco (on the bow), not as a plucked shrunken Jazz upright. But play any modern music which assembles around and above a drum kit and electric bass and voilà – the difference of a bigger woofer is self-evident. Again, it’s not about reach but the element of shove, rhythmic vigour and more kinetic impact. The second element of the bigger-is-different recipe is tone density which figures all the way up throughout the midband until the tweeter takes over. An 8/10” mid/woofer simply sounds chunkier, chewier and more robust than a 5.25/6” or even smaller equivalent. Of course there’s a price to pay in trade. It’s in the wider presence region where most tweeters hand over that the advantages of smaller mids reaching up there assert themselves.

The lucidity, resolution and in-sight into that range is where small drivers routinely pull ahead. It’s the tit-for-tat doctrine. Whilst I hear bigger mids as having the described advantages, I also notice this lesser side. As usual, it’s a matter of flavour, preference and what mix of qualities makes your kind of music most interesting and compelling to your ears. Higher sensitivity very often translates into an earlier wakeup call. If you don’t want to or simply can’t play loud enough (often enough?) to where the sound shows up in full without feeling pale or pinched, then a high-efficiency speaker tends to cross the line into fullness sooner on the dial. 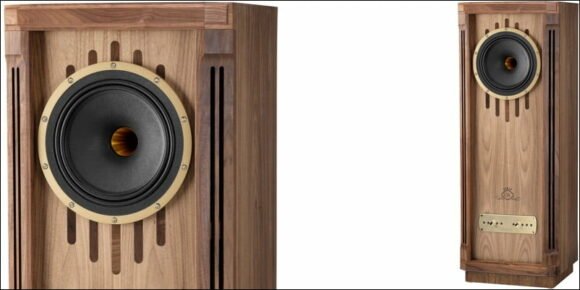 That’s where speakers like the two Hecos (I’ve thus only heard the smaller Direkt) and Zu cash in. They move more air to enhance tonal solidity; they can go very loud and shift rapidly for good dynamic contrast; and (to reach back to KIH #35) they give good tensegrity or musical charge because they’re strong in the power region. Having gone back and forth between our new Druid V and various other resident speakers of late, I noticed something I’ve long suspected. At least for me, speakers which excel in the upper bass and lower midrange with punch and impact and which on tone play it beefier… they are the bigger emotional triggers. Speakers that excel at air and maxed-out presence region detail with shiny treble put me in a more observational mood. Listening then becomes more of a seeing than feeling thing. That visual perspective revolves around soundstage precision, micro detail and top-down illumination. The feeling perspective is a bottom-up thing centred on punchy time keeping and big robust tone.

Me, I like both perspectives. They’re different but both fun. Happily, being a reviewer justifies owning various speakers whose readings spread out into different schools. Alas, most regular listeners just want one pair to “do it all”. I happen to believe that no single pair can, completely. Instead, one must identify the qualities that are important to one’s own list, down the sequence of priority, then make sure that one’s pick crosses off all the cardinal points and however many extras are within the particular design’s reach and budget. If meatier chunkier tone and feistier punchier time keeping rank high on your list, you might consider the type described today. If low-volume happiness is important too, add 94dB+ sensitivity. Besides the Heco and Zu models discussed, there’s also Audio Note UK, the Orangutan models from DeVore Fidelity, various legacy-range Tannoy and so forth. 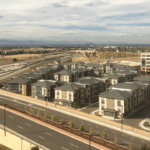 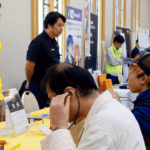