Thump and wallop were noted as the prominent features of a Rega RP8-charged mid-afternoon romp through a 2LP vinyl take on Aphex Twin’s I Care Because You Do; a muscular and meaty KEF LS50 listening experience.

Nine hours later and we were closing in on midnight. The KEFs had been swapped out for the Spatial Hologram M4 Turbo S. SPLs were driven south in the interest of neighbourly consideration.

With Lambchop’s languid Mr. M oozing from the Sonore microRendu over USB, an abundance of micro-dynamic flicker maintained listener focus. The Spatials rate as 93db efficient; they wake up earlier than your average standmount. In this context, tenderness and finesse were noted as the amplifier’s most conspicuous qualities.

An audible jack of all trades; brawn and brains. What kind of voodoo was this?

Drawing down on the less-than-reliable long-term auditory memory, the nova150 (US$1499) – the first new ‘super-integrated’ amplifier to spill from Peachtree Audio’s 2.0 regeneration – possesses little of the Nova 125’s or the (much improved) Nova 125SE’s sonic DNA.

Peachtree Audio’s internal revolution has been largely driven from within by three key factors. Firstly, an all new lead engineer and team were appointed. Secondly, production was moved from China to Canada where the factory specialises in high-end medical equipment. Thirdly, returning to the fold after stints at AudioQuest, Tidal and Audioengine is one David Solomon.

Solomon prefers to keep Mum about the identity of the new engineer as well as precisely how the two Class D ICEPower modules found inside the nova150 have been implemented. What he will tell us is this: a pair of 300AC modules are fed by an outboard SMPS running at 480kHz. 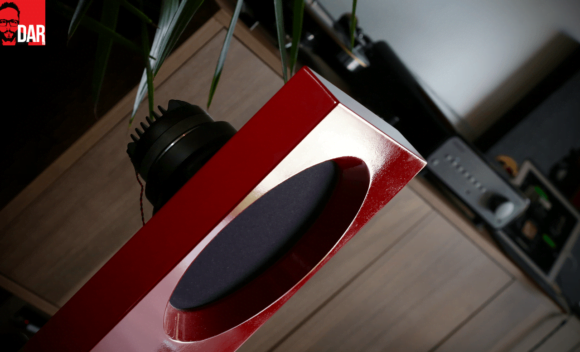 De-sleeving the amplifier for a closer look-see risked damaging Peachtree’s signature curved-rectangular profile. I’ve chipped one before. This nova150 is piano black but Gloss Ebony and Santos Rosewood are available for an extra Benjamin. Peachtree Audio – U (still) got the look.

This time out though we note a significant uptick in SNR: 111db from the nova150 as active pre-amp, 105db as an integrated. Gone for good is the defeatable tube stage that previously glowed blue on each Peachtree integrated’s front panel. A tube stage that Solomon asserts would take SNR down to around 88db had it been maintained as part of the new model’s design.

No tube, no worries. The nova150’s back-panel tape loop will accommodate third party tube buffers for those who a) cannot possibly live without a 2nd-order heavy harmonic distortion profile and b) are therefore happy to surrender some of this amplifier’s price-category over-achievement in shining brighter lights into darker corners.

The tube’s omission and the resulting “superior, quieter circuit” might provide one reason why Lambchop furnished the Spatial open baffles with the jump factor necessary for maintaining listener engagement at low listening levels.

A more costly super integrated with similar levels of late night intimacy is the Vinnie Rossi LIO. With its tube-free Slagelformer pre-stage coupled to a 25wpc MOSFET speaker driver, the LIO’s better saturated tonal colours point us to why one might spend several thousand dollars on a uni-box but the nova150 makes the downward slope of that choice’s diminishing returns curve significantly steeper. 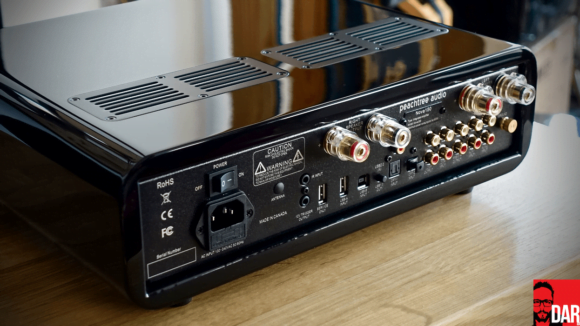 The new Peachtree easily outmuscles its Massachusetts rival on specified watts per channel: 150wpc into 8 Ohms. What’s really interesting is how the nova150 feels more powerful in use than another super integrated, the Devialet Expert 200, even if it can’t quite match the Frenchman on separation and depth of detail retrieval. On overall gestalt, the nova150 sits closer to Devialet than the Vinnie Rossi.

On signal gain, a total of 35db is split 6-29 between the nova150’s active pre-amplifier and power amplifier, the former by-passable via a long, 5-second push on any input selector. That’s useful for those who wish to divert volume attenuation to an upstream box – as I did with the DEQX PreMATE+ when adding a subwoofer to the picture – or when buying into a digital pre with superior-sounding conversion to the nova150’s ESS Sabre32 ESS Reference 9018K2M DAC implementation.

However, as with its predecessors, the functional spirit of this smaller nova (that shares similar dimensions to the early Decco units) is one of inclusion: everything under one roof.

Better to maximise the sound of the nova150’s own D/A conversion with a Sonore microRendu – easily the best-sounding streamer heard to date by this digiphile – than sweat the ‘what if’ of third party DACs strapped to one of its two line-level inputs, one of which doubles as HT bypass (which I don’t do) and the other as an MM phono stage (which I do do). 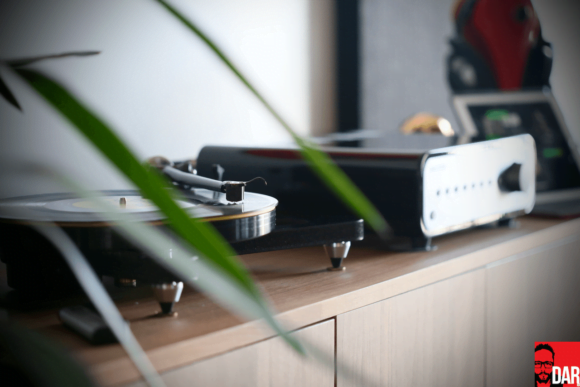 With zero price-appropriate external phono boxes to hand, I can only express my enthusiasm for Peachtree’s internal board in noting how it exposed the clear superiority of the Rega RP8, fitted with Zu-modded DL-103R and step-upped by a Graham Slee Elevator, over the Pioneer PLX-1000 w/ Dynavector 10×5 and, more emphatically, the Rega RP1 with factory-fitted Carbon cart.

Over on the other side of the fence, digital inputs runs a follows: a pair of S/PDIF TOSLINK sockets were populated with outputs from Google Chromecast Audio and an Apple TV; a USB B socket that readily exposed the Roon Ready microRendu’s superior sense of ease and space, wiping the floor with the considerably more functional&friendly AURALiC Aries Mini (running v3.x firmware). The nova150’s S/PDIF coaxial input remained vacant throughout this review.

That brings us to (for me) the nova150’s killer feature: Peachtree’s Dy-NEC USB A input is for digitally siphoning ones and zeroes from suitably equipped smartphones and tablets – that means current iOS devices hooked up via Lightning-to-USB cable or selected Androids + intervening OTG cable. They’ll recharge as they play.

In handing over D/A conversion to the nova150, we bypass the smartdevices’s inferior DAC and 3.5mm-terminated headphone output whose days in iPhone-land are numbered anyway.

Handling the incoming data stream asynchronously, Peachtree claim their Dy-NEC input to be a world first in eliminating electrical noise spilling from the upstream device’s screen and/or power supplies. According to David Solomon, Apple’s Retina displays and their super high refresh rates are especially noisy. 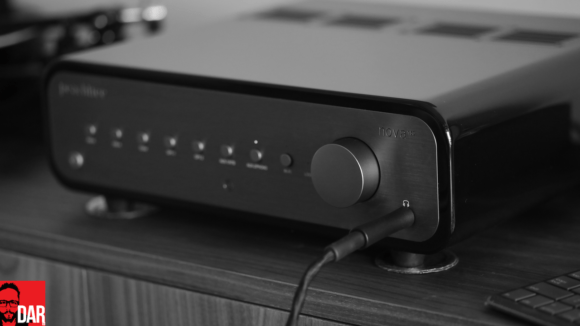 In practice, a Tidal-streaming iPad connected to the Dy-NEC USB A input easily aced the neighbouring Google Chromecast on acoustic mass and layer delineation; the differences were anything but subtle.

Furthermore, Tidal’s iOS app plays gaplessly – just like the CDs it replaced – whereas its Google Chromecast Audio implementation does not.

Gapless playback is also what separates Spotify’s iOS app the Google dongle. With iPad hooked up to the Peachtree amplifier’s USB A port, remote control is executed from any device running the Spotify app. For this user, that meant couch-bound control of The Stranger Things soundtrack from the comfort of the couch with iPhone and/or the work desk with the MacOS app. These software-based remotes one-up the infra-red wand with search, browse and radio etc – I switched over to Lana Del Rey’s Honeymoon without ever touching the iPad.

And if all of the above isn’t enough to convince you that the nova150 is perhaps Peachtree’s best amplifier to date, consider its headphone section: it isn’t resistor-dropped from the main circuit, a method used elsewhere, even by Peachtree 1.0, as a cost-cutting measure. It often leads to high output impedance and all too often fails to deliver the requisite go juice required by thirstier cans.

The nova150’s 6.4mm headphone socket is backed by separate amplifier that promises up to 11.5V to any connected headphone. Its single Ohm output impedance drives not only the Sennheiser HD650 with alarming ease but also the newer HD800S, coming up only slightly shy of the soundstage width and separation delivered by the US$5000 Resonessence Labs INVICTA (running single-ended) – a discovery that led to one of those super-rare, you-gotta-be-kidding me moments. 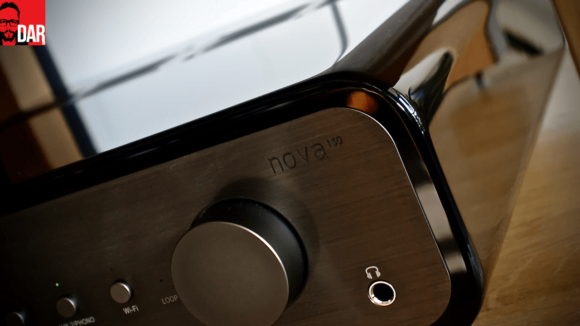 The Vinnie Rossi, with balanced XLR output, is possibly the pick of the bunch in a contest more closely fought than one would expect with a US$1500 integrated thrown into the mix. A timely reminder that the chromed-up Devialet slabs don’t do headphones at all. As compensation, they instead specify a built in network streamer.

And yet, an optional wi-fi streaming module will soon arrive at the nova150’s door, as well as the beefier, better specified nova300 and nova500 set to drop some time later this year. Fingers crossed that this module lands Roon Ready.

Even with streamer subtracted, Peachtree 2.0’s starter unit maxes out on bang-for-buck like no other model before it. Matching the nova150’s performance and feature set with separates would be a snipe hunt.

The nova150 is also for minimalists; those who don’t have the lounge room real estate for – or the time to research and compile – a hifi rack full of separates and tidy its associated cable melange into something halfway presentable. It’s also for renters who move house more often than their mortgaged peers. One box, pack n go.

This newcomer is also for those who care about looks as well as performance. Almost ten years on from the company’s inception, Peachtree Audio’s amplifiers remain peerless on outward appearance. One could be forgiven for buying one on looks alone. Inside though, this model is all wheat and no chaff. A DAR-KO Award is hereby assigned without second thought. 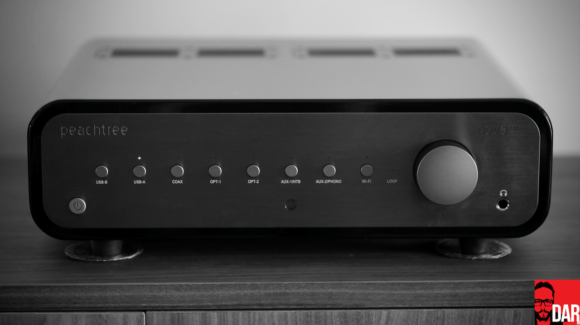