What do we want from a digital audio player (DAP)? Great sound – that’s a given; it’s why we eschew our smartphones in favour of a secondary, superior sounding device. Making the DAP choice trickier is category’s ground, forever shifting beneath our feet. Back in 2013, we had but a handful of options from which to choose. Three years later and it’s a minefield of possibilities.

On the twelve hour flight from Sydney to Los Angeles, the average model from category leader Astell&Kern won’t last the distance. Neither will it accommodate user-installable apps via the Google Play store.

To tick both of those boxes we look to Sony’s NW-ZX2 which is, for all intents and purposes, is an Android smartphone, its telecommunication smarts replaced by better-sounding audio circuitry.

Rival units from Onkyo, Pioneer, FiiO and Acoustic Research offer similar Android app-based functionality – crucial for Mixcloud, Soundcloud, Tidal, Spotify, Pandora et al. Yet none can match the Sony ZX2 on battery life – it offers a whopping 33 hours when playing back hi-res content, even longer with Redbook PCM or MP3. This often-overlooked specification matters to trans-Atlantic and trans-Pacific journeymen.

However, with this year’s introduction of AudioQuest’s DragonFly Black and Red, one might legitimately ask: why factor streaming services into a DAP purchase when a terrific sounding in-line DAC/headphone amplifier can be added to an existing smartphone for US$99/US$199?

It’s not all sunshine and roses in Android and Apple Land. Where the average smartphone comes up short is on 1) FLAC file loading – it can be fiddly; and 2) hi-res file compatibility – it isn’t baked into either OS.

Perhaps all we need from a DAP in 2016 is drag n’ drop file loading, perhaps via an in-built microSD card slot, and the ability to decode up to 24bit/192kHz PCM / DSD, all without a major hit to runtime between charges.

Ditching the full-size screen not only conserves go juice but makes it easier for those who prefer to strap-on an external DAC/amplifier. 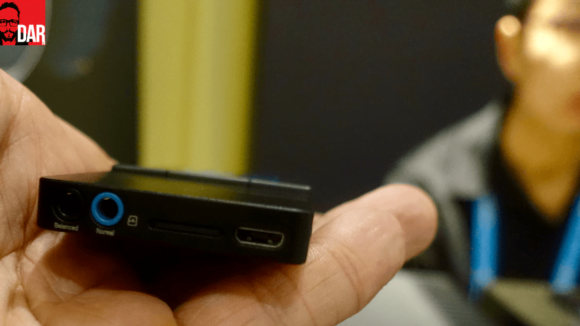 So – say Ni Hao to HiFiMAN’s SuperMini which meets our microSD card-loading and hi-res rocking requirements but ices them with four op-amps per output channel for 4.2V “peak to peak” power (320mW) into 32 Ohms. According to the manufacturer, that’s more than sufficient for HiFiMAN’s own 400S and 400i planars and Sennheiser’s HD650/600 dynamics. Single-ended and balanced outputs present at the base of the unit.

Battery life on this pocket rocket is rated at 22 hours, made possible by HiFiMAN founder and CEO Dr Fang Bian’s choice of silicon. He’s gone for a single chip that combines microcontroller and D/A converter but crucially he has tweaked its firmware for a MUCH better sound.

Such tweaking is something that Dr Fang, a keen soccer player and joke teller, referred to as Mission Impossible when I first encountered his new palm-sized portable at CanJam SoCal back in March of this year (which provides the context for the majority of this post’s photos).

For this commentator, the SuperMini was more of a HiFiMAN hit than their tubed up statement Shangri-La electrostatic rig that commanded long wait times at the opposite end of the table.

At CanJam, the SuperMini on display was just a prototype, a work in progress with the menu system and OSD graphics for its OLED display still be finalised.

Six months later and the SuperMini is now shipping for a most agreeable US$399. Included in the deal is a pair of “special balanced model” IEMs. Value with a capital V. This DAP’s trimmed and toned form factor (104mm x 45mm x 8.5mm and 70g) won’t see you walking with a limp and with a dongle DAC sprucing up streaming on one’s phone, the HiFIMAN SuperMini could be more than anyone might need to plug the hi-res hole. A review unit has been requested.

One final thought: prefer a press release-based news announcement? The Absolute Sound has you covered here.

UPDATE 7th September: Gapless playback has been shelved at the 11th hour and for the foreseeable future. 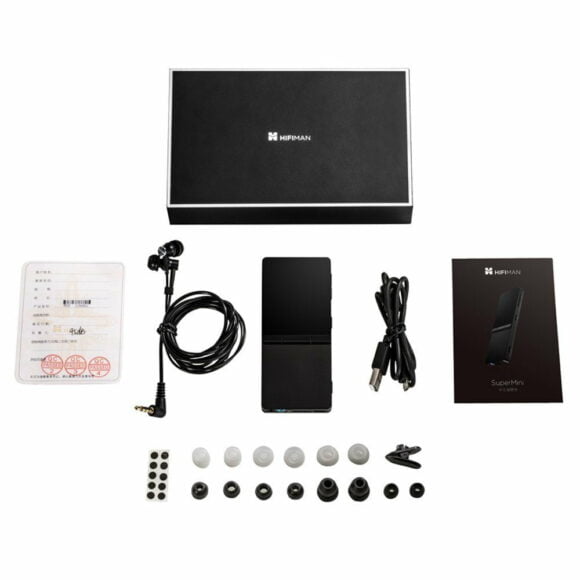