The Azur 851N is Cambridge Audio’s network streamer; it isn’t new to the world but it’s new to me.

Feeding an internal pair of Analog Devices AD1955 chips are the 851N’s coaxial, TOSLINK, AES/EBU and USB inputs. Converted PCM or DSD content spills from the rear panel’s balanced XLR or single-ended RCA outputs. In other words, Cambridge Audio’s flagship streamer is also a DAC; bypassable should you prefer to BYO. 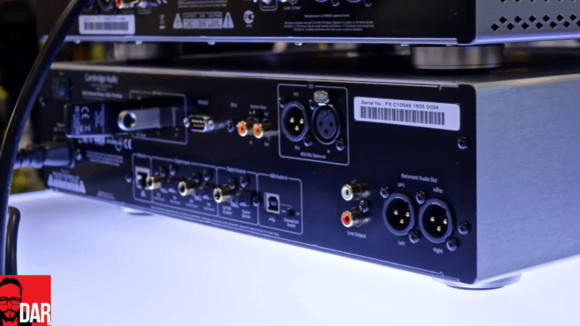 On the front panel, a rotary control navigates the streamer’s menu system read from a covert-art-tastic 11cm TFT screen. This same rotary applies digital-domain volume attenuation (should you need it). That makes the 851N a digital pre-amplifier.

Dig a little deeper and we soon open the book on Cambridge Audio’s StreamMagic hardware/software, a platform that enables a wider-than-average range of connectivity options: Apple Airplay, Bluetooth, UPnP and (one of this reviewer’s favourites) Spotify Connect. The 851N will also play content from a direct-connected USB drive.

This isn’t a hockey-puck streamer either. A full-width aluminium chassis hides a toroidal power supply. A switch-mode wall-wart-free zone.

However, the first question I ask of any digital streaming device is: does it do gapless playback like a CD or vinyl record does gapless playback? Cambridge Audio’s website responds in the affirmative. Phew.

Those are the details that await the curious customer. But what draws him/her closer in the first place?

Great British Sound is the UK manufacturer’s latest branding wrapper for a range of electronics that additionally features CD transports and amplifiers and loudspeakers, developed using tech-tips picked up from Mordaunt Short. The two brands report to the same Audio Partnership mothership.

On the ground at the Hong Kong High-End AV show, that meant staff t-shirts with back-prints that listed song titles of Brit-rock classics from Blur, Oasis, Led Zeppelin, The Rolling Stones, The Stranglers, Joy Division, The Clash, The Stone Roses and…

…The Kaiser Chiefs, whose singles “I Predict A Riot” or “Ruby” leave this Britpop devotee cold but ANY exhibitor spinning ’em should be given a solid gold award for steering things away from the done-to-death audiophile music that rules every other corner of this show and Munich High-End.

Similarly, Cambridge Audio should be applauded a thousand times over for championing more contemporary/leftfield music choices.

The pedal push on Great British Sound also meant hearing David Bowie’s “Let’s Dance” – the full seven minute version if you please – occasionally leak from the prefab listening room built behind a wall that name-checked The Maccabees (who ironically announced their split on Facebook during the second day of the show). Unfamiliar? Their knockout debut album Colour It In is right here. You’ll soon be chanting “Latchmere’s got a waaaaave machine!” in your sleep.

In the meantime, direct from Hong Kong, geezer talk from Cambridge Audio’s MD Stuart George comin’ at ya: