These are many of the qualities used to assess best in breed at a dog show. Being carefully and systematically assessed is how closely each pooch approximates a pre-determined standard. This standard is split between subjective and objective metrics with a heavy slant toward the latter.

According to the American Kennel Club, “…a judge will use his hands to inspect the dog’s body, including its bones and muscles. In addition to assessing physical characteristics like these, judges assess the dog’s walk (gait) and attitude.”

Each contender is assessed by a judge, his hands and his measuring tape. The field is narrowed by until a Best in Show for each breed is found. Here ‘Best’ is defined as “the dog that the judges think matches its breed’s criteria the best…” 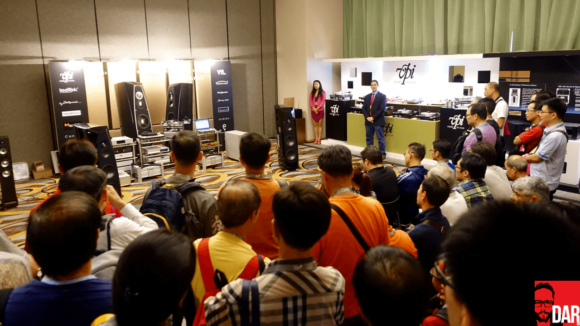 From a theoretical viewpoint, if we accept that there is no absolute sound, how can the show reporter reliably award a single piece of hardware or even a single system with a “best in show” gong?

I’d suggest that s/he can’t. Yes, I’ve been guilty of this practice in the past – but no more. Times change, people change.

As per this site’s recent listing of “best” sub-US$1K DACs in 2016, possible interpretation on the B-word are numerous. 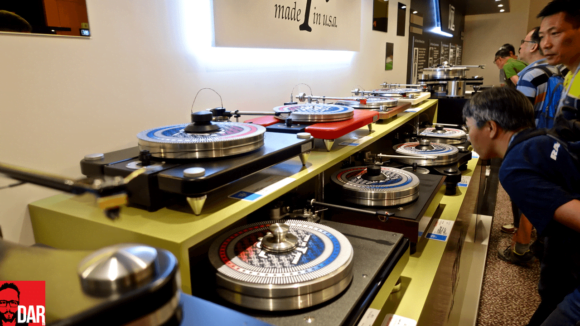 Each exhibit must therefore be seen/heard/assessed as a package deal – system and room. That’s in stark contrast to reviews conducted at home where where one is familiar with the room’s acoustic make-up and can exert ultimate control over ancillary gear and music choices. As Srajan Ebaen once wrote me, a show report is but the sizzle to a review’s steak. One cannot derive sustenance from sizzle alone.

And much like the numerous Stateside regional audio shows, Hong Kong High-End 2016 delivered far too many exhibits for one man to visit during its three day run. Not even a week would have sufficed.

1) Does recent-ism or listener fatigue win out? Are systems heard toward the end of the show judged more or less favourably than those heard at the start?

2) The conscientious exhibitor will tweak his system throughout the weekend – highly unlikely that it will sound the same on day one as it will on day three. The reporter is forever hitting a moving target.

3) Hong Kong High-End is a supremely well attended show and therefore, more than any other audio event covered by this commentator to date, saw ambient noise vary considerably with time of day. More often than not, demo rooms endured intrusive audience chatter.

I’ve taken the long way ’round in explaining that show conditions means means any DAR “Best in Show” award comes without any semblance of (objective) reliability, as might otherwise be found at a dog show, and that, for Hong Kong High-End 2016, this award should really be entitled “Subjectively most impressive demonstration.”

That lacks the catchiness of “Best in Show” but ups the realism. Neither is it an award that the manufacturer will necessarily want to parade in front of would-be customers via their website or printed material.

Which brings us to VPI Industries’ presentation at Hong Kong High-End, held in conjunction with local distributor Ernest Audio. VPI’s Mat Weisfeld, son of Harry, was on the home stretch of his tour of Asia during which time he got hitched to his long-time girlfriend Jane Cai. This New Jersey guy was clearing riding (a) high.

By 10am on Sunday morning the Ernest Audio room was already at capacity. On static display along the side wall, an updated Nomad, now fitted with aluminium platter and re-christened The Player; it permits entry into the VPI turntable world for a flat US$1000 (or US$1200 with the optional headphone amplifier). A defeatable phono stage is fitted to the underside of the plinth. 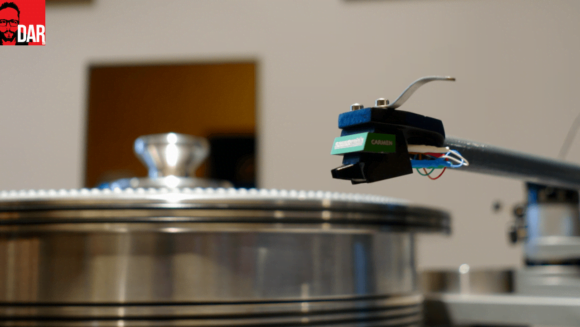 The big rig was loaded with VPI’s flagship: the Titan (US$48,000), reportedly Harry Weisfeld’s retirement project.

From the VPI blog:

“We have been encouraged for many years now by customers and distributors to really push the limit on our engineering. After our visit to Munich and the strong cases made by the overseas market, a sketch on the plane ride was born. The idea in mind was based off our Avenger Reference Magnetic Drive. We double stacked the chassis and machined a 4-inch-thick (weighing in at roughly 40 pounds) platter being driven by a master magnetic sub-platter. I brought the initial sketch to Harry and from there he refined and moved the needle on the project.”

“Once meeting with our machinists, it was decided to bring back acclaimed Rim Drive Dual Motor Flywheel. Or, as Harry has been putting it, the “Magneto Rim-drive”. The initial prototype was constructed and demonstrated at our recent VPI training event. At the event were many dealers who own and use our Classic Direct, and Avenger Reference and were blown away by this new table. We had not come up with a name until during the listening session Harry turned and said, this Titan is giving us the best sound! It was agreed by all attending dealers that “Titan” was the perfect name for the table.”

On how it actually sounded, I’ve not a clue. As detailed above, one cannot reasonably isolate the contribution of the source device in an unfamiliar system playing unfamiliar music in an unfamiliar room. The most one can hope for falls to the GIGO principle favoured by ‘source first’ advocates: the system would fail to impress if the source weren’t up to snuff. Let’s call this hardware collective seriously sumptuous, salt to taste and leave it at that.

More impressive than the hardware however was the VPI gear’s presentation: Mat Weiseld has come a long way since taking the reigns of VPI four years ago. Perhaps this young’uns talents with audience engagement is attributable to his former life as a high school teacher?

With Ernest Lau on translation duties, the duo worked the room, not into to a frenzy but down to a whisper – no mean feat at this Hong Kong event. First some introductory talk, then a little music, then some more talk, then some more music. An approach that’s perfectly suited to a show where critical listening is rarely achievable.

This is where DAR’s video coverage, albeit rudimentary, comes into its own. Moving picture documentation cuts through the need for dressing up what went down with clever wordsmithery and vignetted photos.

In the footage below you’ll see yours truly start with camera held aloft just inside the doorway to capture Weisfeld kicking off the morning’s proceedings. Lau and Cai hover in the background. With several attendees giving up on getting a proper look, I stepped forward before finally squeezing my way ’round the back for a sit down on the right. From the floor, the remainder of this presentation was captured – a dog’s eye view.

Did you hold out for the final scene that shows one less than engaged audience member?