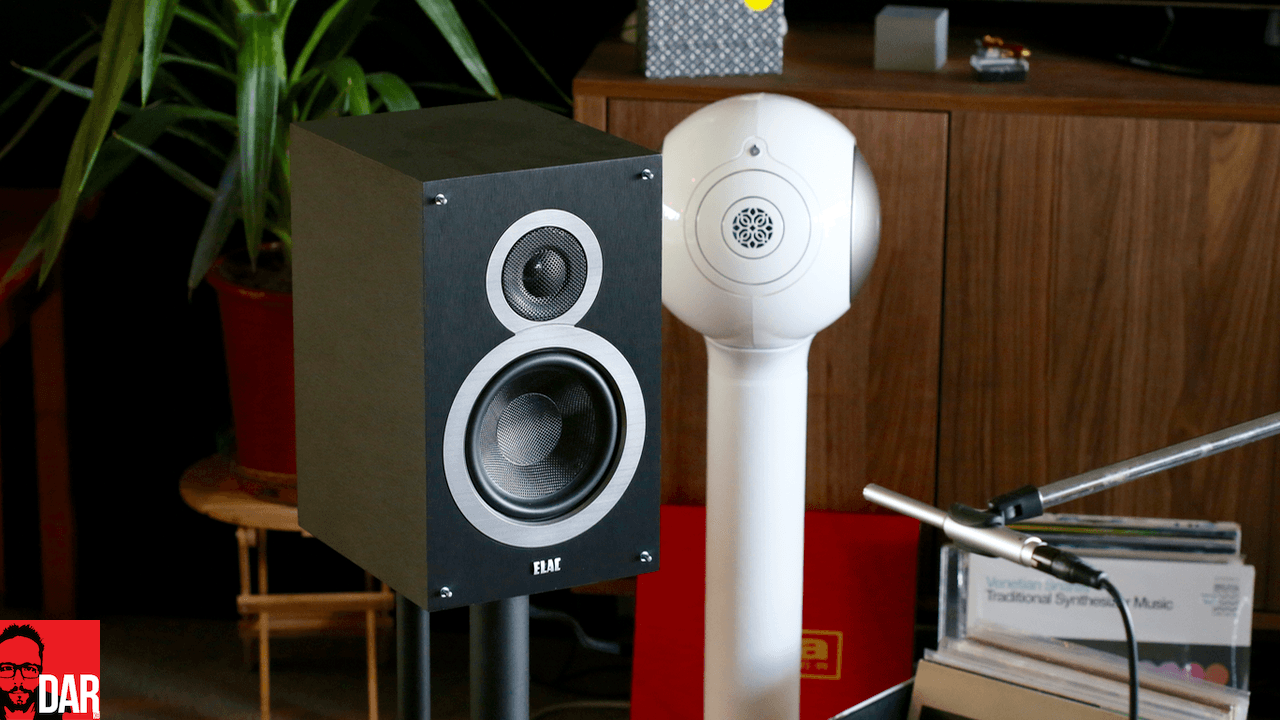 Like many a modern day audiophile, I live in a one bedroom apartment. My listening room is also my lounge room where I do everyday things like watch TV, entertain guests, read and work.

Getting jiggy with specifics, the carpeted area measures 5.8m from front to rear wall, 4.7m from balcony door to galley kitchen. The latter adds a further 1.9m of tiled floor and Corian bench tops to the left (not pictured) and flicking the ‘up’ switch on the motorised roller door to the right adds 3.1m of wooden decked balcony that, with shutters peeled back and SPLs pushed hard, has sound drifting out into the street below. For listening (and measuring!) the roller door is closed. 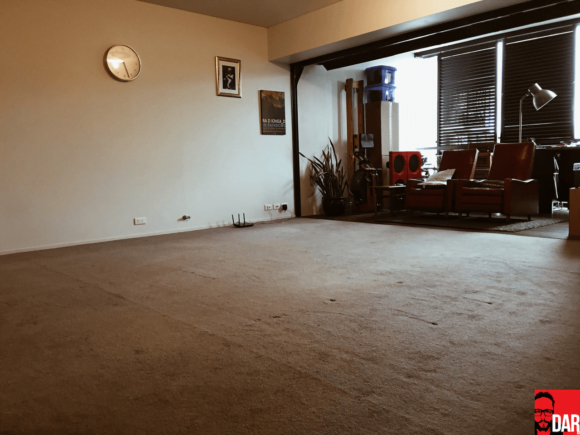 Over on the front wall, four more Polymax panels wrap an IKEA sideboard so that absorption is extended beyond the width of any in-situ loudspeakers. At time of writing, a pair of Devialet Phantom and the all-new (to Australia at least) ELAC Debut B6 standmounts designed by Andrew Jones.

At US$275/pair, you don’t need me to tell you (again) that the Debut B6 offer a tremendous amount of bang for buck – a finding unearthed time and again.

The most noticeable compromise is the ELACs’ plain Jane appearance. You’ll find next to no concessions to aesthetic niceties here. Presumably, Jones kept to his build budget by keeping everything straight edge: a 2-way bass reflex design housed in a black brushed vinyl-wrapped MDF enclosure. What could be simpler than that? 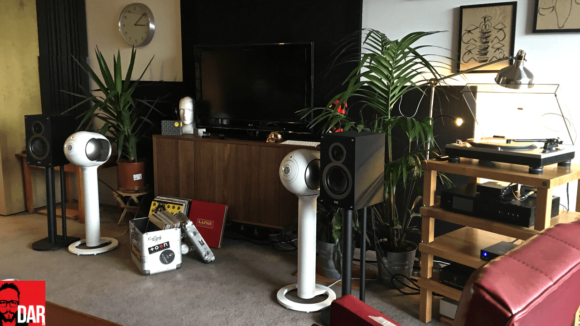 Pulling off the fabric grilles, as I did, gives us something a little more interesting to look at.

Maybe it’s Jones’ choice of a 6.5” Aramid fibre (better known as Kevlar) mid/bass driver that keeps kick drums kicking and low-end plucks swinging, all whilst maintaining a significant degree of bouncy agility. In other words, better than average dynamics at this price point.

The Debut B6 is not a sluggish-sounding speaker but it lacks the heft and forward propulsion of the KEF LS50 that, a week or so ago, sat atop a pair of Atabite-filled Atacama Nexus 6 loudspeaker stands.

Perhaps it’s Jones’ choice of (1″) cloth domed tweeter that maintains the B6’s high frequency sparkle without it ever becoming overbearing. The B6 don’t offer the same level of detail retrieval as the more visually striking – and let us not forget 6x more expensive – KEF standmount. Neither do they disappear as easily or image with quite as much clarity but the ELAC are more adept at forgiving poorer source material.

KINDNESS – that’s the headline for those who subsist on a daily diet of music that’s more everyman and less audiophile in nature and for which production values vary wildly.

I interviewed Andrew Jones at the Munich High-End Show this year. By his own admission he isn’t afraid of a complex crossover. Maybe Jones’ network design is why the B6 are so easy to listen to for hours on end. They won’t murder the lo-fi snarl of Dinosaur Jr. but they’ll happily keep up with the punctilious electronic percussion found in Richie Hawtin’s busier techno assaults.

The Debut B6 fuse fleet-of-foot dynamic handling to a more easy going laissez-faire. These qualities convincingly stand in for the greater refinement and weightiness heard in more expensive loudspeakers and hold their own. Now, that’s impressive. The Debut B6 should be at the top of your audition list when shopping for a first ‘proper’ hifi system because they’ll turn the law of diminishing returns into a cliff dive.

But there’s a wrinkle. At 87db and 6 Ohm nominal impedance, your average 60 – 80 watt integrated amplifier probably won’t quite cut it if you intend to listen a) LOUD or b) in anything but a small room.

These ELACs can sound a little threadbare if not fed with sufficient power; to wit, I noted greater tonal mass with the B6 powered by a single Red Dragon S500 power amplifier than the Devialet Expert 200, whose 200 wpc is specified by the manufacturer at 6 Ohms (and not the more usual 8 Ohms). 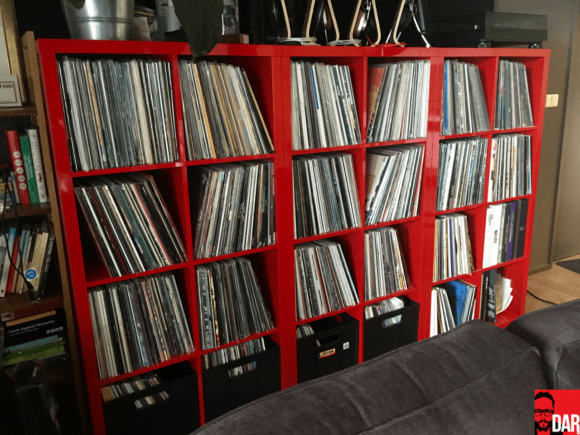 Bridging a pair of the S500 as monos give us 1000 wpc and really puts the meat-on-the-bone to drive more daylight between the Utah Class D bricks and the Devialet. With less demanding loads however the Expert 200 offers the most detail and refinement of the two.

Hearing that US$2000 or more is required to get the ELAC’s up to snuff runs contrary to the first-timer’s rule of thumb that largest budget slice should be reserved for loudspeakers. Think of it this way: it’s not that the amplification demanded by the B6 is so darned costly, rather that the B6 are just a ridiculously bargain..

For more amplifier options, readers are directed to this article in which the lift is lifted on two Class A/B possibilities from REDGUM Audio and Rotel.

With Class D however our prospects widen: the Wyred4Sound mINT; Peachtree Audio’s nova150, seen paired with these very same ELACs at T.H.E. Newport Beach in June; and the Bel Canto C7R that Jones himself used to introduce the Debut series at the Newport show a year earlier.

Back at DAR HQ, the S500 monoblocks occupy the bottom shelf of a HiFi Racks rack. Above them, a D/A converter from PS Audio has since supplanted the Mytek Brooklyn. The DirectStream Junior has just semi-officially gone Roon Ready but I elected to feed it with a 96kHz S/PDIF signal from the DEQX PreMATE+ (US$5495). Catch up here.

Side note: I’m using the DEQX as as a DDC but occasionally its in-built ADC is put to use for vinyl playback. The DAC/pre section is thus far untested.

Can you tell what’s coming next? A microphone, a pseudo-anechoic measurement of the ELAC Debut B5 using DEQX’s Calibration software to draw a graphical representation of the loudspeaker’s frequency response: 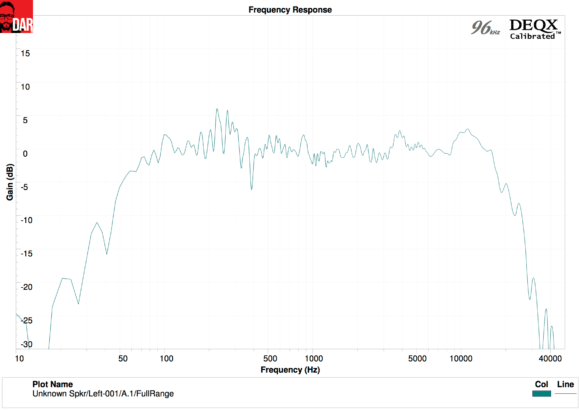 The measurement had (thus far) not been truncated to remove any room interaction but DEQX’s general manager Alan Langford was seriously impressed: “That’s beautiful”, he gushed over Skype; remote access to the my Windows PC running DEQXCal came courtesy of Teamviewer. This frequency domain measurement does little to contradict ELAC’s own claim that the Debut B6 reach down to 44 Hz.

However, could we get the ELACs sounding better still with DEQX’s loudspeaker correction algorithm?

As we saw previously with the KEF LS50, the PreMATE+ unit works in concert with the DEQXCal software to measure the loudspeaker’s impulse response from which a group delay measurement is derived. This is then truncated to remove any room interference and a long linear phase FIR filter applied to pre-emptively correct for the loudspeaker’s timing errors. 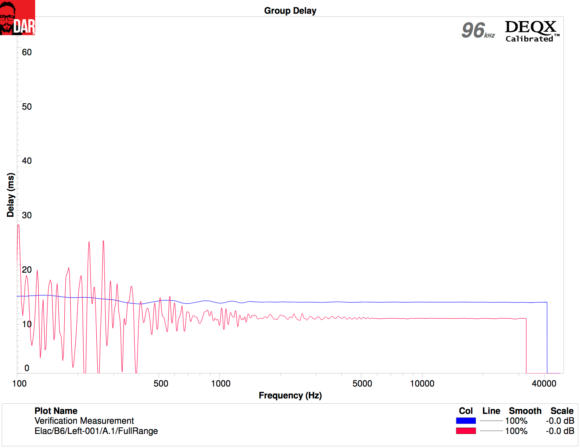 The ELAC B6’s au naturel (uncorrected) group delay response is shown in red. Once DEQX-corrected, it is re-measured – the blue line – to verify any improvements. I think this graph speaks for itself. Note the measurement truncation at 100 Hz – the frequency at which the impulse response tells us the room’s acoustic make-up and first reflections begin to intrude on our pseudo-anechoic reading.

Correcting a loudspeaker’s group delay has implications for its frequency response – the two are mathematically related. Here we see the ELAC’s measured frequency response above 100 Hz before and after correction in red and blue respectively: 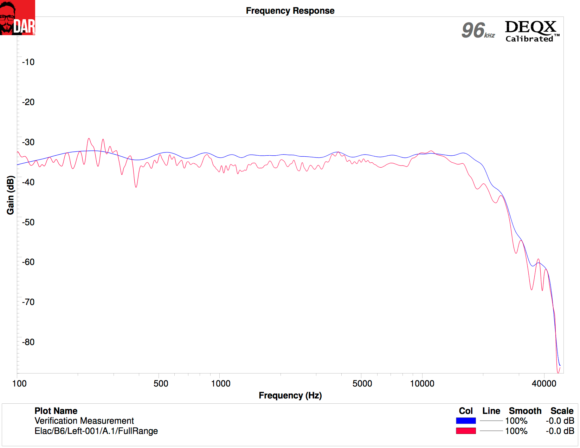 DEQX’s correction filter was then loaded into one of the PreMATE+’s four presets for engagement via the unit’s front panel or from the comfort of the listening position with the supplied remote control (which is somewhat vanilla). I chose to remain couchbound for a day’s listening by making full use of the PreMATE+’s (soon to be) Roon Ready status. A and B, back and forth.

The improvements introduced by DEQX’s DSP aren’t Mum-and-Dad dramatic but they are audiophile significant.

In a similar vein to the frequency response graph above, the Andrew Jones-designed ELACs enjoy a nip here, a tuck there: slightly better image specificity and player outline focus; an extra half turn on bass tightness; a marginally smoother top end. Cosmetic surgery that gives us marginal improvements to vocal clarity also.

But that isn’t the end of our story. This time out, we’re taking DEQX correction a step further. The elephant in the room is the room. Often overlooked, it is the single most important component of any loudspeaker-based audio system.

For a fun take on why the room matters, check out this neat three minute video from acoustic treatment company Acoustic Geometry (headphones are recommended):

TL;DW? A loudspeaker fires sound in many directions, its off-axis dispersion causing sound to bounce off walls, the ceiling and other reflective surfaces. These reflections arrive at the ear later than sound arriving directly from the speaker; hearing both but out of time results in distortions to the original signal.

Room treatments are a good way to improve a room’s sonic qualities but they are also visually intrusive. And not everyone has the luxury of a dedicated listening room. I suspect more readers than not have a listening room that doubles as their main living space that must be shared with others.

The visual intrusion of all things audio even in my living space matters. The Polymax absorbers were chosen for their aesthetic discretion and affordability – around US$100 for all six. I don’t want my living space to look like a sound lab even though it must serve as one for this fella’s 9 – 5.

Time for some more frequency sweeps, this time with the microphone placed at the listening position. It is from here that the room is measured and a Parametric EQ applied to correct for any bumps and lumps. 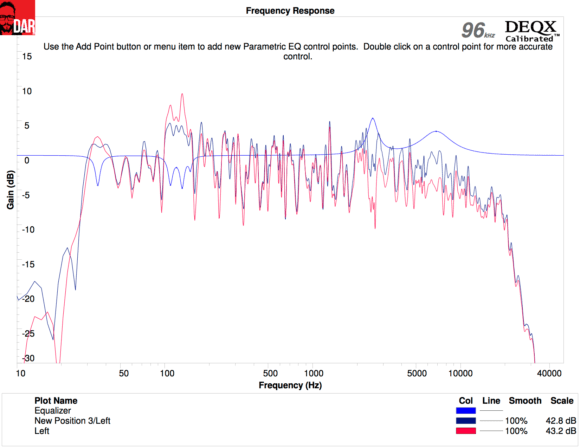 The red line shows the ELACs’ in-room frequency response with loudspeaker correction engaged. Note that the B5’s low frequency presence, as measured at the listening position, is emboldened? That’s the room at work.

The brighter of the blue lines shows the DEQX’s PEQ target with a few additional points added by Langford to tame bumps at 30 – 40 Hz and 100 – 200 Hz as well as a slight dip just below 3 kHz (which, purely coincidentally, is the B5’s crossover point).

With my ears taking the place of the microphone at the couch’s listening position, the delta between A and B (as described above) showed itself to be wider than between B and C. In other words, loudspeaker correction had a more pronounced effect on soundstage organisation than room correction; the latter only showing slightly better layer separation, especially in the midrange. My vote therefore went for C. 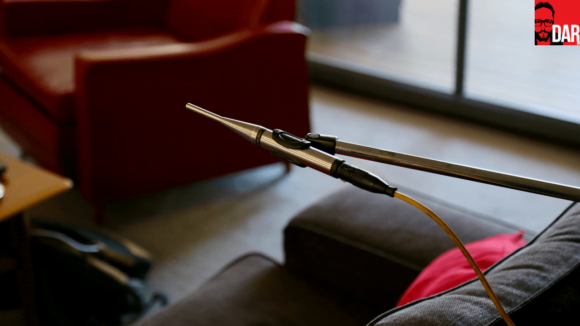 Langford’s snappy response, “There’s no use fixing the room if you can’t fix the speaker!”. His reasoning: that all frequencies leave the loudspeaker at the same time (i.e. group delay) so that they arrive at their first reflection points at the same time, so that whatever bounces off those first reflections is entirely surface – and NOT loudspeaker – dependent. Makes intuitive sense.

The DEQX PreMATE+ has proven itself as capable of two distinct things: 1) improving a loudspeaker’s audible performance through group delay correction and 2) improving its audible performance in-room. Wham and bam. Kapow! A Knockout? We’re not done yet. This DEQX box has another top trump card tucked up its sleeve – that’s coming up in Part 3. 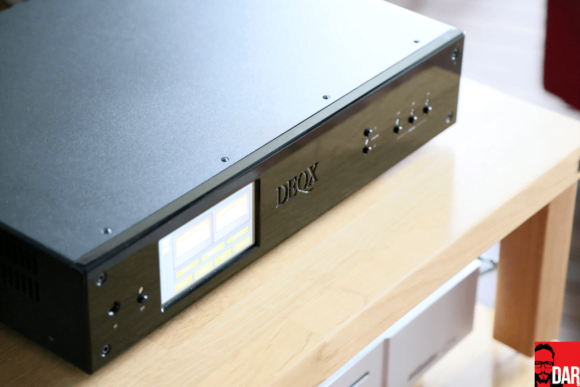 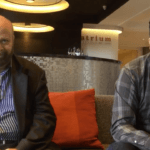 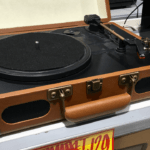