The Munich High-End Show this year once again reaffirmed its status as the number one hifi show in the world. One German distributor I spoke to no longer exhibits because he sees the event as having lost its German flavour, overwhelmed by a more powerful (read: international) all spice.

One such sufferer was Bel Canto Design President Michael McCormick who did his level best to talk through some of the features of the company’s new super-integrated, the ACI 600.

The A in ACI is the most technically potent of the three – a front foot reminder that all digital inputs, from Ethernet to S/PDIF to USB, are asynchronously clocked. 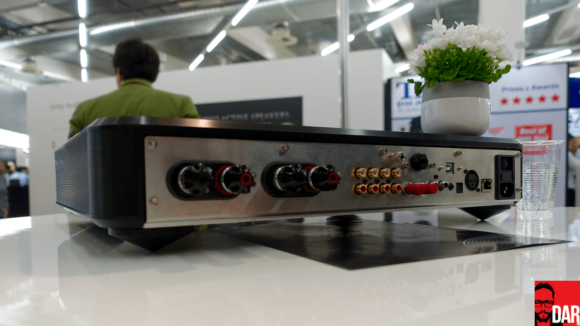 More on this in the video interview with McCormick below.

The ‘600’ refers to wpc output power into 4 Ohms. Into 8 Ohms we get 300wpc. A pair of custom nCore 500 modules from Hypex handles loudspeaker drive. Hook up comes via WBT’s NextGen binding posts.

Specification promised include 0.0005% distortion and 127dB of dynamic range.

The ACI 600 is the costliest super-integrated we’ve seen to date (by far!) but it also shows us that even the high/er end players see the potential in boiling multi-box setups down to one.